The sea urchin is a doughty animal that can withstand cold and turbulent seas, eat almost anything, and defend itself from many predators — though not human gourmands — with its pincushion of tough spines. It’s one of the creatures that lured biologists to establish one of the world’s first marine research stations in 1877 at Kristineberg on Sweden’s west coast, for the sheltered Gullmar Fjord there is characterized by deep, cold waters that support a wide array of sea life.

That water is still being piped into laboratories to nourish aquariums filled with urchins, fish, sea stars, and other local marine fauna. But today most of the ongoing experiments in Kristineberg revolve around what biologists have taken to calling “the other CO2 problem” — the ways in which humanity’s giant, ongoing experiment in altering the world’s atmosphere is causing the oceans to become more acidic. Even the pristine-looking Gullmar Fjord — with its granite shores lined with spruce and pine trees, clear waters, and teeming populations of eiders, gulls, and many fish species — isn’t immune to that global change. 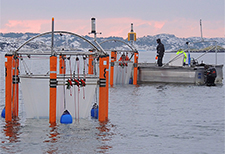 This winter, something new appeared in the waters of the Gullmar Fjord: a floating array of ten giant, clear polyurethane bags, each supported by its own framework of floating orange pipes. Each bag amounts to a suspended test tube more than 60 feet deep and containing almost 15,000 gallons — a so-called “mesocosm” of native seawater and fjord organisms, separated for months from the fjord water just outside.

Part of a project known as the Biological Impacts of Ocean Acidification, or BIOACID, the array is the largest and longest-term study of ocean acidification attempted to date. In half of the mesocosms, a team of researchers from five European countries has lowered the pH to the level that the world’s oceans might experience in 2100. The scientists are now monitoring how generations of plankton and other organisms ranging up the food chain — including the larvae of sea urchins, cod, and herring — are reacting to that altered environment.

This summer, when the experiment comes to an end, researchers believe they will have a better idea of which species might win and which might lose in a more acidic ocean. Previous experiments by researchers from the German-based GEOMAR Helmholtz Centre for Ocean Research and elsewhere have shown that some photosynthesizing phytoplankton, such as tiny algae, benefit when more CO2 is available. Organisms higher up the food chain, then, might have more food available to them in the pH 7.8 mesocosms.

But dealing with higher levels of acidity can interfere with the ability of creatures like mollusks to build shells and can cause other physiological stress. How those factors — nutrient availability versus a changed environment — affect a variety of species is a key question being studied in the mesocosm experiment.

“The mesocosms provide the opportunity to look decades into the future to see what the oceans might look like then,” says Rolf Schwarz, an engineer at the Helmholtz Center who helped design the intricate experimental units.

The world’s oceans have been getting more acidic because they continuously absorb carbon dioxide from the atmosphere. These days, marine waters are absorbing so much carbon dioxide from the burning of fossil fuels that it’s as if one loaded train car full of carbon were careening into the ocean every second, 24/7. Because CO2 reacts with water to form carbonic acid, the result is that ocean water has been getting more acidic. Though there’s a lot of regional variation, measurements have shown that the average pH of the ocean has declined by about 0.12 since the preindustrial era, from a starting point of 8.15 to 8.2, according to Ulf Riebesell, a biologist at the Helmholtz Centre and one of the leaders of the BIOACID project.

Oceans have been getting more acidic because they continuously absorb carbon dioxide from the atmosphere.

That might not seem like a big deal, were it not for two factors. First, there’s the alarming and accelerating trajectory that civilization is on: According to climatological models, at humanity’s current rate of carbon emissions the ocean’s pH would decline to 7.8 by around the year 2100. That would be the most acidic ocean in at least 300 million years, and the pH level would have changed in a much shorter period than is recorded in paleoclimatological records, according to a 2012 study led by paleoclimatologist Bärbel Hönisch of Columbia University’s Lamont-Doherty Earth Observatory.

“Comparable changes in environmental conditions like today’s acidification led to mass extinctions a number of times in the past, even though those changes took place ten to a hundred times more slowly than today,” says Riebesell.

Second, there’s been extensive laboratory work showing that many marine organisms don’t respond well to the more acidic conditions. At a pH of about 7.8, many shelled organisms dissolve. Some fish larvae grow more slowly, and clownfish and sea snails display aberrant behavior, such as swimming toward a predator. The impacts of acidification have even received attention from aquaculturists and epicurians: In the Pacific Northwest, reproductive failure at some oyster farms has been attributed to increased acidity in the waters.

It’s this plethora of documented, negative effects that led Riebesell and his team to develop the experimental mesocosms. 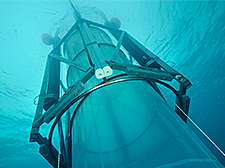 A view from below of a mesocosm, which holds water and organisms from the fjord. YVES GLADU/EPOCA

“It’s one thing to look at this in the lab, organism for organism,” he says. “But we really want to observe ecosystems directly, with all the factors that belong to them — predation, competition, and so on. We want to know how food webs react, not only single organisms.”

But monitoring food webs over the lifespan of fish or sea urchins, which take several years to reach maturity, would take too long and would be too costly. For that reason, Riebesell designed the mesocosm experiment to focus on many generations of plankton and other tiny ocean organisms, which mature far more quickly and will also be affected by increases in ocean acidity.

It’s an intriguing idea, but not an easy one to carry out. For repeatability and comparison, the researchers wanted ten mesocosms — five to be filled with ocean water to which additional CO2 would be added, and five controls. The Helmholtz team has previously installed and monitored mesocosms at locations in Spitsbergen, Norway, and Finland since 2010, but only for relatively short periods. This year, in order to capture the spring phytoplankton bloom — an explosion of photosynthesis that is the foundation of the marine food web — the researchers had to install all this equipment in late January, when the fjord is often choked with floating pack ice.

For a while, thickly clad researchers in an aluminum boat had to patrol the array to prevent ice from puncturing the bags. Then the bags began to sink and leak because they were filled at the height of winter, a time when the seawater in the region is particularly saline, which adds weight. Researchers had to refill the mesocosms and install additional buoys.

To make half of the mesocosms acidic, the research team poured in a few hundred liters of fjord water to which a great deal of CO2 had been added, creating a pH of 7.8 inside the floating bags. Since mid-February, the scientists have been taking samples every two days of the chambers’ water and of the debris that accumulates at their base. Dead plankton, waste material, and other organic matter make up this smelly muck. By analyzing both the water and the bottom debris, the researchers can tell what types of plankton and other organisms are living in each mesocosm and their relative proportions — an indication of how different organisms might fare in more acidic conditions.

As sea urchins adapt to more acidic water, they might lose the ability to cope with other stresses.

By mid-April they’d watched as phytoplankton bloomed and were in turn eaten by an array of tiny grazers. In the next two months, they are going to observe how succeeding generations of plankton interact with one another. And they’ll see how those changes ripple up the food chain to the larvae of higher-level animals, such as sea urchins and herring.

If Riebesell and his colleagues find differences in the community makeup between the control and high-CO2 units, that will provide insights into how evolution might allow ecosystems to adapt — and which species might flourish, and which might suffer.

The researchers will be comparing notes with Sam Dupont, a researcher at the University of Gothenburg who is based at the Kristineberg station. He has conducted a number of laboratory studies on sea urchins and other shell-forming organisms, and has been able to show that urchin larvae do have some ability to deal with more acidic water. At a cellular level, they can shield their vulnerable calcareous skeletons from overly acidic water. But there’s a cost.

“When the larvae are raised in low-pH water they have less energy left for growth, because they need more energy to deal with the stress,” he says. “They grow slower. That’s a big problem for larvae, because the more time they spend free in the water the more they’re exposed to predators.” Urchins are much more susceptible to predation as free-swimming larvae than after they have built their prickly outer skeletons and turned into adults.

‘We might get an idea whether adaptation is a possibility,’ says one scientist.

In a recent study, Indiana University biologist Melissa Pespeni also exposed sea urchin larvae to high CO2 conditions. She found that the species has so much genetic diversity that some individuals can survive just fine. But as urchins adapt to more acidic water, they might lose the ability to deal with other environmental stressors, such as pollution or nutrient runoff.

What’s needed, Pespeni says, are long-term studies focusing on entire food webs — precisely the kind of experiment being carried out in the mesocosms of the Gullmar Fjord. Dupont agrees, noting that there’s a great benefit to having his lab experiments taking place alongside the work in the fjord. “It’s kind of a synergy between the lab work, where we can control every variable, and the crazy, chaotic work out in the ecosystem,” he says. “They’re really complementary.”

The mesocosms are scheduled to keep serving as floating aquariums at least until July, by which time the researchers expect dozens of generations of short-lived plankton to have flourished inside. Riebesell hopes that measurements of this generational progression will provide valuable insights. “We won’t be able to learn exactly what the oceans will look like in a hundred years,” says Riebesell. “But we might get an idea whether the concept of adaptation is a possibility.”