The Deepwater Horizon oil spill is overshadowing another catastrophe that’s also unfolding in the Gulf of Mexico this summer: The oxygen dissolved in the Gulf waters is disappearing. In some places, the oxygen is getting so scarce that fish and other animals cannot survive. They can either leave the oxygen-free waters or die. The Louisiana Universities Marine Consortium reported this week that this year’s so-called “dead zone” covers 7,722 square miles.

Unlike the Deepwater Horizon disaster, this summer’s dead zone is not a new phenomenon in the Gulf. It first appeared in the 1970s, and each summer it has returned, growing bigger as the years have passed. Its expansion reflects the rising level of fertilizers that farmers in the U.S. Midwest have spread across their fields. Rain carries much of that fertilizer into the Mississippi River, which then delivers it to the sea. Once the fertilizer reaches the Gulf, it spurs algae to grow, providing a feast for bacteria, which grow so fast they use up all the oxygen in their neighborhood. The same phenomenon is repeating itself along many coastlines around the world. This summer, a 377,000-square-kilometer (145,000-square-mile) dead zone appeared in the Baltic Sea. In 2008, scientists reported that new dead zones have been popping up at an alarming rate for the past 50 years. There are now more than 400 coastal dead zones around the world.

Warming is expected to reduce the mixing of the ocean by making surface seawater lighter.

As serious as these dead zones are, however, they may be just a foreshadowing of a much more severe crisis to come. Agricultural runoffcan only strip oxygen from the ocean around the mouths of fertilizer-rich rivers. But global warming has the potential to reduce the ocean’s oxygen content across the entire planet. Combined with acidification — another global impact of our carbon emissions — the loss of oxygen could have a major impact on marine life.

Scientists point to two reasons to expect a worldwide drop in ocean oxygen. One is the simple fact that as water gets warmer, it can hold less dissolved oxygen. The other reason is subtler. The entire ocean gets its oxygen from the surface — either from the atmosphere, or from photosynthesizing algae floating at the top of the sea. The oxygen then spreads to the deep ocean as the surface waters slowly sink.

Global warming is expected to reduce the mixing of the ocean by making surface seawater lighter. That’s because in a warmer world we can expect more rainfall and more melting of glaciers, icebergs, and ice sheets. Since freshwater is less dense than salt water, the water at the ocean’s surface will become lighter. The extra heat from the warming atmosphere will also make surface waters expand — and thus make them lighter still. The light surface water will be less likely to sink — and thus the deep ocean will get less oxygen. Instead, more of the oxygen will linger near the surface, where it will be used up by oxygen-breathing organisms.

The prospect that global warming could reduce the ocean’s oxygen has led some scientists to wonder if the predicted decline has already begun. It’s a 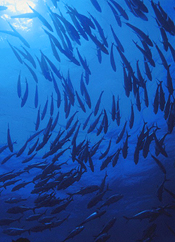 maddeningly hard thing to determine, however. We can be very confident that humans have driven up the concentration of carbon dioxide in the atmosphere because scientists have recorded a steady increase over the course of decades. The signal of human-produced carbon dioxide is stronger than the noise of nature’s ups and downs.

Fluctuations in oxygen levels, on the other hand, are a lot noisier. As ocean currents oscillate naturally, upwellings of deep-ocean water can deliver nutrients to coastal waters, triggering an explosion of growth and driving down oxygen levels. Volcanoes can alter oxygen levels, too, by creating a haze that blocks sunlight, thus temporarily cooling the ocean’s surface and allowing more oxygen to dissolve into the water.

In recent years some worrying signals have started to emerge from the noise. In 2006, for example, oxygen levels off the coast of Oregon dropped to record lows. Reefs that had been packed with rockfish and other animals suddenly became ecological ghost towns. Instead of agricultural run-off, studies on the Oregon dead zone suggest that global warming was partly responsible. Higher temperatures have reduced the oxygen in the ocean currents that deliver water to the Oregon coast.

Because records of oxygen levels are incomplete, scientists are calling for a new push for more research.

It’s much harder for scientists to figure out what’s happening in the open ocean than along the coastlines, because the records are far spottier. But some recent studies have also offered cause for worry. In April, for example, Lothar Stramma of the University of Kiel and his colleagues published a study in Deep Sea Research in which they compared records of oxygen levels in the tropical ocean from two periods: from 1960 to 1974 and from 1990 to 2008. In some regions, the oxygen levels have gone up, the scientists found, but in most places they’ve gone down. In fact, the area of the global ocean without enough oxygen for animals to survive (less than 70 micromoles per kilogram to be exact) expanded by 4.5 million square kilometers (1.7 million square miles). That’s an area about half the size of the United States.

Because the records of oxygen levels in the past are so incomplete, many scientists are calling for a push for more research. An international collaboration started in 1995, the Climate Variability and Predictability Repeat Hydrography Program — CLIVAR for short — is beginning to gather better data. But in the latest issue of Annual Review of Marine Science, Ralph Keeling of Scripps Institution of Oceanography and his colleagues warn that the CLIVAR program may need 20 to 30 years to establish long-term trends of oxygen levels. To speed up the process, they call for a global network of floating sensors known as Argo to be brought into the effort. If scientists put oxygen sensors on a few hundred of the 3,000 Argo floats, Keeling and his colleagues predict that a clear pattern would emerge in as little as five years. Keeling and his colleagues believe that it’s urgent to speed up this research, because the deoxygenation of the oceans could have a major impact on marine life.

In order to project how global warming will alter oxygen in the oceans, climate scientists are developing a new generation of computer models. The models are still too crude to capture some important features of the real world, such as the way winds can change how deep water rises in upwellings. But the models are good enough to replicate some of the changes in oxygen levels that have already been recorded. And they all predict that the oxygen in the world’s oceans will drop; depending on the model, the next century will see a drop of between 1 and 7 percent.

Jellyfish, which can tolerate lower oxygen levels than fish, may thrive in the new conditions.

That could be enough to have a profound effect on life in the ocean, according to Daniel Pauly, a fisheries biologist at the University of British Columbia. In his new book, Gasping Fish and Panting Squids: Oxygen, Temperature and the Growth of Water-Breathing Animals, Pauly argues that getting oxygen is the most important constraint on the growth of fishes and many other marine animals. That’s because it takes a lot of energy to extract oxygen from water, and the bigger animals get, the more energy they have to invest.

Pauly and his colleagues are working on computer models to project how global warming will affect the world’s fisheries. Many species of fishes will shift their ranges away from water that’s too warm for them. But this flight from heat may force them into regions of the ocean with low levels of oxygen, where their growth will be limited. Pauly and his colleagues predict that the drop in the ocean’s oxygen and pH levels will together reduce the world’s fish catch by 20 to 30 percent by 2050.

While fishes and other animals with high oxygen demands suffer, jellyfish may thrive. Jellyfish can tolerate lower oxygen levels than fish, in part because they can store reserves of the gas in their jelly. Free from competition and predators, jellyfish will be able to feast on the microscopic animals and protozoans that feed on algae. They may thus leave more food for bacteria, spurring a further drop in oxygen levels.

A drop in oxygen may also cause the ocean’s bacteria to change. Bacteria that need oxygen will no longer be able to thrive in oxygen-free zones of the ocean. But these dead zones will foster the growth of many species of bacteria for whom oxygen is toxic. Some of these oxygen-hating microbes produce nitrogen compounds that are among the most potent greenhouse gases ever measured. In other words, a drop in oxygen levels could further intensify global warming.

Unless we find a way to rein in our carbon emissions very soon, a low-oxygen ocean may become an inescapable feature of our planet. A team of Danish researchers published a particularly sobering study last year. They wondered how long oxygen levels would drop if we could somehow reduce our carbon dioxide emissions to zero by 2100. They determined that over the next few thousand years oxygen levels would continue to fall, until they declined by 30 percent. The oxygen would slowly return to the oceans, but even 100,000 years from now they will not have fully recovered. If they’re right, fish will be gasping and squid will be panting for a long time to come.