The postcard-sized advertisements that appeared this winter at three health clubs in Vietnam’s capital, Hanoi, were unlike anything the clubs had ever displayed. Typical ads there promote upscale restaurants or golfing lessons that interest the club’s clientele of expatriates and wealthy Vietnamese. But the new ones showed an image of a rhinoceros whose horn had been replaced with, of all things, human feet.

“Rhino horn is made of the same stuff as human nails,” an accompanying slogan said in Vietnamese. “Still want some?”

The ads were sponsored by TRAFFIC, a U.K.-based group that monitors the international wildlife trade, and WWF, the Swiss-based environmental organization. The aim was to persuade current or would-be consumers that rhino horn, contrary to local lore, has no magical medicinal benefits. 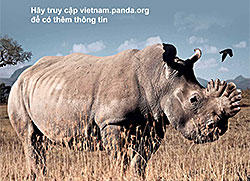 An ad campaign in Vietnam depicts human feet protruding from the head of a rhinoceros. WWWF/TRAFFIC

Vietnam has joined China, its northern neighbor, as a central driver of soaring global demand for rhinoceros horn, according to wildlife experts and law enforcement agents. Now, after pursuing legislative and diplomatic solutions to the rhino crisis for years, some conservation groups are opening a second front focused on reducing demand for rhino horn among Vietnamese consumers.

Cracking down on poaching and policing the illegal wildlife trade have long been the main strategies for saving rhinos and other endangered species from extinction. But there is a growing movement to confront the key force behind the trade — the consumer’s desire for a product. At least five nonprofit organizations, four of them international, have started campaigns in Vietnam in the last few years to blunt consumer demand for rhino horn. The groups have long collaborated on fighting the illegal importation into Asia of rhino horn and elephant ivory. But today, “demand reduction” is an increasingly important focus of their work and a topic of discussion at wildlife conferences and symposia.

Some advocates point to recent campaigns in China — where wildlife groups have been battling ivory importation and shark fin consumption for years — as a bellwether of how campaigns to blunt consumer demand may play out in Vietnam. But they are quick to acknowledge that reducing demand cannot stand on its own as a strategy. The Hong Kong-based Shark Fin Trade Merchants Association, for example, says demand-reduction campaigns of recent years are cutting into fin traders’ profits. But the campaigns were accompanied by an official decision to ban the product from state banquets, coupled with a growing spate of refusals by international airlines to carry shark fins as cargo.

And although the basketball star Yao Ming and other Chinese celebrities have publicly advocated against the purchase of ivory and other illicit wildlife products, a key break came in 2011 when pressure from conservation groups persuaded the Chinese government and Baidu, the Internet search giant, to clamp down on online auction sites for endangered wildlife products. Grace Ge Gabriel, Asia regional director at the Massachusetts-based International Fund for Animal Welfare, which is fighting ivory trafficking in China, said those actions led in 2012 to reductions of 40 percent in auction volumes.

“I’m glad to see in the last two, three years that more focus is put on demand,” says Ge Gabriel. “But we have to realize that what we are doing, really, is social change — and social change could take generations.”

Tom Milliken, a rhino expert who opened TRAFFIC’S first Asia office in Japan 32 years ago, noted that in the 1980s and 1990s in Japan, South Korea, and Taiwan, rhino horn use was virtually eradicated using a combination of strategies. These included law enforcement, campaigns to reduce consumer demand, and the threat of economic sanctions from some segments of the international community.

Milliken says that today’s demand-reduction strategies are driven more by market research and a growing — though far from complete — understanding of consumer behavior patterns. “We are much more sensitive to trying to understand the minds of those driving the trade and working from there,” he says, “not just projecting our own values.”

It’s still too early to tell whether the campaigns to lower demand for rhino horn will be a success in Vietnam. But those involved in the fight against the shadowy rhino horn black market say that law enforcement strategies in Vietnam, a nation bedeviled by corruption, have clearly been insufficient. A Hanoi-based non-profit, ENV (Education for Nature - Vietnam), says that since 2010 no one has been sentenced to jail for trafficking in rhino horn, an offense that carries a maximum penalty of seven years. Nguyen Phuong Dung, vice director of ENV, says that the criminals who smuggle rhino horn into Vietnam from Africa are linked to larger Vietnamese crime syndicates that also traffic in tiger bones and other illicit goods.

Some Asian consumers buy crushed rhino horn for up to $25,000 per pound.

Rhino horn has been used in Vietnamese traditional medicines for centuries, but wildlife experts say consumption of the product by Vietnamese has spiked since the mid 2000s in tandem with swift economic growth. Some Asian consumers buy crushed rhino horn for up to $25,000 per pound, according to U.S. law enforcement officers. Asia-based wildlife experts say rhino horn is widely seen as an exclusive luxury good and a status symbol.

Soaring demand has led to a dramatic increase in the pace of rhino killings since 2008. According to TRAFFIC, a record 1,004 were killed last year in South Africa, which has nearly three quarters of the world’s wild rhino population. The figure marked a sharp increase over the 2012 death toll of 668. Fewer than 25,000 rhinos are now left in Africa.

Vietnam’s government has taken some high-profile steps to address rhino horn trafficking and consumption, such as cracking down in recent years on public sales of rhino horn in Hanoi and signing a 2012 memorandum of understanding with South Africa on biodiversity conservation. Prime Minister Nguyen Tan Dung also issued a directive in March calling for stricter enforcement of wildlife crime. But these steps appear to have had little effect, and the government faces mounting pressure from the international conservation community. In 2011, Vietnamese wildlife officials fended off criticism from conservationists after poachers hunted the country’s native population of Javan rhinoceros to extinction. And last year CITES, a global convention on rare fauna and flora, ordered Vietnam to intensify its efforts on combating rhino horn trafficking.

Naomi Doak, an organizer in TRAFFIC’s Vietnam office, says TRAFFIC and WWF are researching which newspapers and television programs to target in order to reach potential users of rhino horn, who claim its benefits range from boosting male potency to curing cancer. She said the goal in upcoming advertising is not so much to explicitly tell consumers not to use rhino, but rather to portray its use as unfashionable by noting, for example, that is composed mostly of keratin, a protein found in human nails and hair.

A survey shows Vietnamese buy rhino horn less as a ‘cancer cure’ and more as a status symbol.

Last year, ENV, in partnership with the African Wildlife Foundation, distributed a public service-style video to Vietnamese television stations showing gruesome footage of a hornless, suffering rhinoceros. It asked: “How could eating her horn make you feel better?”

And WildAid, a San Francisco-based advocacy group, launched a demand-reduction campaign in March featuring a coterie of Vietnamese officials and celebrities, including Miss Vietnam, Nguyen Thu Thuy, and Johnny Tri Nguyen, a popular actor. The launch at an upscale Hanoi hotel included a screening of a pro-wildlife video featuring Britain’s Prince William, the Duke of Cambridge, and the soccer star David Beckham.

“People need to understand the horror of the problem they create with this superstition,” WildAid’s executive director, Peter Knights, said of the rhino horn obsession, according to a press release from the event. It said the campaign would conduct surveys and organize events and programs in the coming years to curb demand for rhino horn.

So far, the groups have earmarked a total of only a few hundred thousand dollars for their consumer campaigns. And Daniel Lindgren of Rapid Asia, a Bangkok-based consultancy that evaluates social marketing strategies, said that such campaigns in Asia can be especially tricky because firmly held superstitions tend to be more widespread than they are in Western consumer markets, making it harder to change people’s opinions.

“This is the problem with a lot of NGOs I talk to: People tend to see behavior change as a black-and-white thing,” he explains. “Whereas, in fact, behavior change is a series of steps … and moving people up those steps is very important for behavior change to take place.”

In Vietnam, wildlife campaigners say the first phase in their rhino horn work has been attempting to figure out who was actually consuming it — or planning to. Yet the results from their preliminary surveys often yielded answers that contradicted their assumptions. For example, ENV researchers, after informally surveying a range of Vietnamese involved in the rhino trade, found that the product was being consumed less as a presumed “cancer cure,” as they had suspected, and more as a status symbol.

One potential pitfall of the consumer campaigns, according to Milliken of TRAFFIC, is that by emphasizing the rarity and high cost of rhino horn, advocates could inadvertently enhance the product’s value in the eyes of potential consumers. Whether the Vietnamese government is serious about cracking down on the rhino horn trade also remains a major question. Nor is it clear whether any of these efforts can succeed in time to prevent hunters and poachers from driving rhinos to extinction in South Africa.

Vincent Nijman, an expert on Southeast Asia’s wildlife trade at Oxford Brookes University in Britain, says demand reduction is unlikely to work on its own. However, he adds, because rhinos face such an enormous threat, the strategy may be worthwhile if conducted in tandem with robust law enforcement measures in Asia and Africa. “We need to do something,” Nijman explains. “So in that sense, it’s good to get it on the agenda.”