In late July, a group of Inuit hunters set off by boat along the west coast of Banks Island to search for Peary caribou, which inhabit the Arctic archipelago of Canada. Roger Kuptana, a 62-year-old Inuit who had grown up on the island, didn’t give his fellow hunters much chance of success in their hunt for the animals, the smallest caribou sub-species in North America.

“I think it’s a waste of gas,” Kuptana told me when I visited his modest home in Sachs Harbour, a traditional community of roughly 100 people on the island, not far from the Yukon-Alaska border. “There used to be a lot of caribou around here when I grew up. But now you have to travel pretty far north to find them on the island. It’s not just here. It seems like this happening everywhere.”

As it turned out, Kuptana was right; the Inuit hunters found no Peary caribou, despite three days of searching. The hunters’ predicament is familiar to the Eskimos of Alaska, other Inuit of Canada and Greenland, and the Nenets, Komi, Evenks, Chukotkans, and indigenous groups of northern Russia and Scandinavia. Throughout the Arctic, many of the great caribou and reindeer herds that once roamed the treeless tundra, providing an indispensible source of meat and clothing for aboriginal groups, are in free-fall. 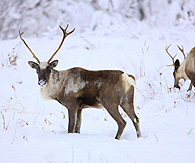 For caribou, less snow makes it easier to dig for vegetation. VEER

Thirty-four of the 43 major herds that scientists have studied worldwide in the last decade are in decline, with caribou numbers plunging 57 percent from their historical peaks. Some populations have fallen precipitously: The Bathurst herd in Canada’s central Arctic has plummeted from a peak of 472,000 in 1986 to 32,000 today — a drop of 93 percent.

According to scientists, the causes of the global caribou decline are straightforward: rapidly rising Arctic temperatures are throwing caribou out of sync with the environment in which they evolved; oil and gas development, mining, logging, and hydropower projects in the Far North are impinging on the caribou’s range; and, though not a major factor, hunting is further depleting already beleaguered caribou populations.

In the 1.6 million years that caribou have roamed the northern hemisphere, their populations have risen and fallen with cycles of glaciation and deglaciation. In more recent millennia, populations have ebbed and flowed on a regional basis. But what concerns many caribou experts now is the rapid, global decline of caribou and reindeer (reindeer is the Old World name for the caribou, Rangifer tarandus) in the face of precipitous warming.

Two caribou experts from the University of Alberta, Liv Vors and Mark Boyce, have done extensive research showing that a host of factors related to warming are taking a heavy toll on caribou populations, which they say now “hover on the precipice of major decline.” These factors range from a growing incidence of extreme weather and ice storms, which prevent caribou from reaching lichen and other vegetation under the ice, to a significant increase in mosquitoes and flies, which torment the animals and prevent them from foraging and gaining the body mass needed to successfully reproduce.

Caribou are better adapted to cold than to warmer, moister weather.

Peary caribou have been particularly hard hit by weather-related events. Back in 1961, when the first aerial survey of the Arctic islands was done, biologists estimated Peary caribou numbers to be 24,000. Since then, at least two catastrophic freeze-ups that were caused by early fall ice storms and rains and early, short-lived spring thaws resulted in more than 90 percent of the animals starving to death because they could not punch through the ice to get to food. Peary caribou populations have fallen today to about 2,000 animals. Scientists in the far-northern Norwegian archipelago of Svalbard told me earlier this spring that they are seeing the same kind of icing take a toll on reindeer in that region.

While there is evidence to suggest that these severe icings have happened in the past, there are also signs that they are likely to occur more often in the future. In recent decades, the Arctic has been heating up twice as fast as the rest of the northern hemisphere — with temperatures routinely rising by 4 to 5 degrees F — making fall rains, early thaws, and severe icing events increasingly common.

Both caribou and reindeer are better adapted to cold than they are to warmer, moister weather. In cold, dry winters there is less snow to slow them down and sap their energy while they’re on the move or being chased by wolves. Less snow, especially if it is not icy and hard-packed, also makes it easier for them to dig down to the vegetation they need in order to get them through to the summer months.

But the icing problem is only one of a host of warming-related effects now plaguing caribou. In a paper published last year in Global Change Biology, Vors and Boyce detailed these impacts. As spring arrives earlier and earlier, “the flush of highly nutritious plant growth” has advanced. Yet caribou reproduction and calving are not occurring earlier, meaning the calves are born past the peak of prime forage availability.

In addition, the lichen and other tundra plants favored by caribou are gradually being replaced by shrubs and trees that are advancing northward as the Arctic warms. Vladislav Nuvano, an expert on the history of reindeer herding in Chukotka, in the Russian Far East, told me recently that reindeer herders there are seeing woody shrubs expand at the expense of lichens and other reindeer food.

Vors and Boyce also reported that rising temperatures have led to an increase in mosquitoes and flies, whose harassment of caribou interferes with their ability to forage and ultimately means that the animals gain less weight. One study in southern Norway showed that rather than increasing foraging times to compensate for harrying by insects, the animals lost body mass, which makes it harder for the calves to survive the winter and for adults to successfully reproduce.

As more southerly animals invade caribou territory, they bring disease with them.

As other, more southerly animals, such as deer, move north as the Arctic warms, they invade caribou territory, bringing with them disease, such as the meningeal brain worm, according to Vors and Boyce. The worm does not harm deer, but kills caribou. In addition, as moose arrive from the south, wolf packs follow them, and while the much-larger moose are more successful at fending off wolves, caribou succumb more easily to the predators.

Komi reindeer herders along the Kola Peninsula in Arctic Russia are already complaining that their animals are losing 20 percent of their weight by the time they take them to slaughter. Not only is heavy snow making it more difficult to move the animals, warmer temperatures are delaying the winter round-up by up to two months because the lakes the herders need to cross are not freezing over as fast as they once did.

The other major threat to global caribou populations is industrial encroachment — the roads, pipelines, drilling platforms, mines, dams, and other human development that is shrinking the size and quality of the habitat these animals can move to when they become stressed by climate changes and overhunting.

In northern Canada, French mining giant Areva is proposing a $1.5 billion uranium mine near the calving grounds of the Beverly caribou herd, located in Nunavut Territory. That herd’s numbers have fluctuated considerably in recent decades, going from an estimated 210,00 in 1971 to 110,000 in 1980, to 286,000 in 1994. Aerial surveys done in the past several years show a steep drop in both the number of cows and calves, indicating that the herd now contains far fewer animals than in the mid-1990s.

Environment Canada has dragged its feet on creating reserves and migration corridors for caribou.

The Canadian government is backing the Areva project, which will include four open pit mines, one underground mine, and the construction of roads and bridges. The project promises to create 400 jobs, many of which will go to the chronically underemployed Inuit in the region. But indigenous hunters oppose the mine, saying it could seal the fate of the Beverly caribou herd and create a precedent that will endanger other herds in the Canadian tundra. Half of the world’s caribou populations live in Canada’s Far North, which also contains most of the world’s uranium.

Farther south in Canada, logging and other human activities have led to a steady decline in numbers of woodland and mountain caribou. Yet, according to University of Montana caribou expert Mark Hebblewhite, Environment Canada has dragged its feet for years on creating reserves and migration corridors for these caribou sub-species.

Across the Arctic, development — sometimes aided by warming that is increasingly opening up the once ice-covered Arctic Ocean — threatens caribou and reindeer. In the central region of the Russian Arctic, the reindeer-herding Evenks have been struggling to stop a $13 billion hydroelectric development that will flood an area ten times the size of New York City.

In Greenland, a 22-mile access road that was built in 2000 between the Kangerlussuaq airport and the Greenland Ice Cap has already caused a major habitat alteration for the Kangerlussuaq-Sisimiut herd. The road, which provides year-round access to tourists, day-trippers, and hunters, traverses what was once sensitive habitat for the herd during the calving and post-calving periods. Now, ALCOA, the world’s largest producer of aluminum, wants to build a giant smelter in the region, along with several hydro dams to power it.

Anne Gunn, a former biologist with the government of the Northwest Territories and now a scientific consultant, is concerned that the whittling away of caribou habitat is occurring just as the animals are feeling the effects of global warming. Unlike some scientists, Gunn, who has more than 30 years of field experience, believes caribou can adapt to the climate changes occurring now. She is most concerned that very little is being done to protect critical caribou habitat, especially the critical calving grounds and migration corridors. Of 24 large caribou herds being tracked by CARMA — the Circumpolar Rangifer Monitoring and Assessment Network — only the calving grounds of the Porcupine and Bluenose West herds are fully or largely protected.

“For caribou it is all about ‘space’ — their perceptions of what space they need, including the space needed to distance themselves from us,” said Gunn. “Climate change and overhunting are very serious factors that need to be addressed. But unless we give caribou the space they need, I’m afraid we’re going to see these declines continue.”