Daouda Sanankoua is an aquatic mayor, and proud of it. The elected boss of the district of Deboye arrived for our meeting in the West African state of Mali last month by overnight ferry. At this time of year, the majority of his district is flooded. Thank goodness. “More water is good,” he said, peering at his foreign inquisitor over his glasses. “Everything here depends on the water, but the government is taking our water.”

While we spoke, in the tiny schoolyard of Akka village, a few meters from the lapping waters of Lake Deboye, the headlines around the world brought news of flood disasters in Australia, Brazil, and Sri Lanka. But Daouda was grateful for the annual swelling of the River Niger, which left most of his 24 villages marooned. For without the water, they would be desert.

The floods in what geographers call the inner Niger delta nurture abundant fish for the Bozo people, who lay their nets in every waterway and across the lakes. As the waters recede, they leave wet soils in which the Bambara people plant millet and rice, and they expose vast aquatic pastures of bourgou (or hippo grass) that sustain cattle and goats brought by nomadic Fulani herders from as far away as Mauritania and Burkina Faso. This inland delta is Africa’s second-largest floodplain and one of its most unique wetlands. Seen from space, it is an immense smudge of green and blue on the edge of the Sahara.

But this rare and magnificently productive ecosystem is now facing an unprecedented threat, as a Libyan-backed enterprise has begun construction of a project inside Mali that will divert large amounts of Niger River water for extensive irrigation upstream.

This is all part of a grand plan by Gaddafi to make his desert nation self-sufficient in food.

This is all part of a grand plan by Libyan leader Moammar Gaddafi to make his desert nation self-sufficient in food through long-term deals with nearby countries to grow food for Libya. Mali’s president has agreed to the scheme, which numerous experts say will enhance Libyan food security at the expense of Malian food security by sucking dry the river that feeds the inland delta, diminishing the seasonal floods that support rich biodiversity — and thriving agriculture and fisheries vital to a million of Mali’s poorest citizens — on the edge of the Sahara desert.

“More people will lose than win from most irrigation projects in Mali,” says Jane Madgwick, CEO of Netherlands-based Wetlands International, with whom I traveled for three days in the inner Niger delta. “These projects will decrease food security by damaging the livelihoods of those most vulnerable. What they are trying to do at the moment makes no sense because there is simply not enough water.”

Larger than Belgium, the Niger’s inland delta, laced with rivers and marshes, runs for 250 miles from northeast to southwest in central Mali, one of Africa’s poorest countries. The rights to harvest the delta’s fish and graze pastures are based on long-standing custom neither known nor recognized beyond its borders. I had spent days exploring this world as the seasonal floodwaters began to recede. I watched the arrival of the Fulani and talked to fishing families as they packed up their homes and left their villages to set up temporary camps beside the pools where the fish would concentrate in the weeks ahead.

Out there in the waters somewhere were a few surviving hippos, African manatees, and the odd crocodile. Madgwick constantly grabbed her binoculars to spot kingfishers, marsh harriers, cormorants, and purple herons, many of them winter migrants from Europe. Her organization is working with locals to revive flooded forests destroyed in past droughts, to maintain fish ponds among the flooded grasses, to extend the new practice of cultivating bourgou, and to encourage kitchen gardens planted by women’s groups.

But all this is threatened by events upstream, said the mayor: Others want his water. Over a torch-lit evening meal of Nile perch, millet porridge, and bananas — all fruits of the wetland — he said that this year the rains were good and the waters high. But even so, some dams built prior to the Libyan project, which irrigate 235,000 acres, have already diverted water and changed the timing of when it reaches the wetland, damaging the wet pastures and upsetting fish breeding. Some species have disappeared as a result. And, say Madgwick and others, much worse is to come. 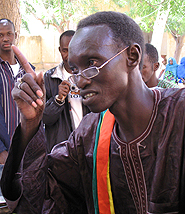 Libya’s wholesale move into Malian irrigation and agriculture is the result of a secret deal between Mali’s president, Amadou Toumani Toure, and Libya’s Colonel Gadaffi. Paid for by Gadaffi’s sovereign investment fund, the Libya Africa Portfolio Fund for Investment, the deal hands the land to a Libyan-controlled organization called Malibya for 50 years and gives the Libyans undisclosed rights to the region’s water. Why would the Mali president sign up to this?

Local campaigners say their government is in thrall — and hock — to Libya because it has become dependent on Libya for aid and investment. Many of its civil servants work in offices built by Libya, and international visitors stay at Libyan-built hotels. And, says Lamine Coulibaly, head of communications for the Mali small farmers’ union, CNOP, the government is so obsessed with getting investment for its agriculture that it cannot see when that investment will do more harm than good to its people.

Before going to the delta, I had visited a new canal stretching 25 miles north from the River Niger to 250,000 acres of proposed irrigated land at the edge of the marshes. The canal, part of the Libyan project, was dug last year by Chinese contractors, who are now preparing the first 15,000 acres of fields.

The project is one of many major investments by Libya all across Mali. Gadaffi is using his petrodollars to fund government buildings, hotels, and other high-profile infrastructure. Critics such as Coulibaly call the farm mega-project a land grab. But far more important, it is also a water grab on a huge scale. Coulibaly adds: “We have enough land; we don’t have enough water.”

The delta is a vital green resource for both humans and wildlife on the edge of the Sahara.

The scale is breathtaking. The brand new intake works for the scheme can grab as much as 210 cubic meters a second, potentially more than doubling the amount of water taken from the river for irrigation. The director general of Malibya, Abdalilah Youssef, boasted in 2008 that his new canal could supply up to 4 cubic kilometers of water a year to the enterprise’s fields of rice, tomatoes, and fodder crops for cattle. The current take for all other existing irrigation projects is 2.7 cubic kilometers a year.

Already, engineers at the Office du Niger — an agency created by presidential fiat to develop land upstream of the inner Niger delta — admit they are struggling to maintain the minimum flow of 40 cubic meters a second down the Niger to the delta during the dry season, when an estimated 70 percent of river flow goes to farms rather than the wetland. The effects of taking more could be catastrophic on the floating forests and bourgou pastures at the heart of the delta’s ecosystems and human livelihoods.

A vital green resource for both humans and wildlife on the edge of the Sahara, the delta is a wintering ground for millions of migrating European birds and is vital to the flow of the Niger River and its fisheries. All this is threatened by the Libyan project. For example, planned dams and diversions will reduce the growth of the important bourgou grasses by almost two-thirds, according to a study by Leo Zwarts, a water management expert for the Dutch government.

Now, however, Malian officials have no control over the project. Their president has signed that away. They say the Libyans have carried out a social and environmental impact assessment, although its contents have not been made public. The job of the Malian officials is simply to organize compensation for the thousands of people who are expected to lose their homes to the irrigation projects and to find new land for those farmers who refuse to be turned into Gadaffi’s laborers.

There is no official confirmation, but few doubt that the rice grown here will go to Libya. More than 1,200 miles away across the Sahara, Gaddafi has spent $30 billion over the past three decades building the Great Man-made River, which pumps ancient water from deep beneath the desert through 1,800 miles of huge pipes to irrigate farms on the Mediterranean coast. But even with that giant hydrological enterprise in operation, Libya still depends on foreign markets for three-quarters of its grain.

The giant farm being built on the edge of the inner Niger delta by Malibya is his next big gambit.

Any disruption of the region’s traditional way of life could feed Al Qaeda’s violent agenda.

Mali of course needs development. It is changing and so are the wants and needs of its people. Schools and clinics are starting to appear; every fishing encampment, however temporary, has a TV antenna; the fishing nets are made of nylon and come from China; the kids wear Obama T-shirts and support European soccer teams; motorbikes are starting to replace donkeys; there is sporadic cellphone coverage and young village men break the still wetland nights with their sound systems. These days, too, traditional lines of ethnicity and livelihood are blurred as cattle herders take up fishing, fishers harvest grain, and millet farmers go herding. But the fecundity of the delta remains the basis of their survival in one of the poorest countries on Earth.

This year, the Mali government is expected to publish a ten-year “sustainable development plan” for the delta. Early drafts are said to sanction a big expansion of irrigation. European aid agencies funding the process have reportedly demanded a rewrite. Whatever it finally contains, the plan faces a long consultation process before being enacted, by which time the game may be over, the water swallowed up by the Libyan project and others.

This may not just be a local matter either. With Al Qaeda busy recruiting disaffected people such as the Tuareg nomads around Mali’s borders, any disruption to the traditional way of life could feed its violent agenda.

So this is a key moment that will likely determine the fate of one of Africa’s great natural resources, a living embodiment of how humans and nature can live not just in harmony but in synergy. Get it wrong and they will be creating new desert while claiming all the while to be greening it. Get it wrong and the repercussions could spread far and wide.

As we left the heart of the wetland for the provincial town of Mopti, our boat kept grounding on the bottom of the narrower waterways. Macaques laughed as we scrambled to resume our journey. The low water was simply a sign of the changing season, but it felt like an omen for the wetland.