Rice is a thirsty crop. Yet for the past three years, Alberto Mejia has been trying to reduce the amount of water he uses for irrigation on his 1,100-acre farm near Ibague in the tropical, central range of the Colombian Andes.

He now plants new kinds of rice that require less water. He floods his paddies with greater precision and has installed gauges that measure the moisture content of the soil. On a daily basis he can determine how much nitrogen the plants need, and he relies on more advanced weather forecasting to plan when to fertilize, water, and harvest the grain. 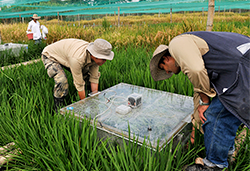 “We are learning how to manage the crops in terms of water, which will be a very, very good help for us now and in the future,” Mejia says, adding that the current El Niño weather pattern has caused serious drought. “We have very difficult days — hot, with no rain. It’s dry. There are fires in the mountains … Growing crops makes it a complicated time here.”

Ever since a drought devastated his yields five years ago, Mejia has been eager to integrate sweeping changes into his rice production. He believes that the weather has become more erratic and is concerned that future climate change will make rice farming even more difficult. As a result, and with the help of his local rice growers association and scientists from the International Center for Tropical Agriculture, he is embracing what has come to be known as “climate-smart agriculture.” These are agricultural techniques that protect farmers from the effects of global warming and improve crop yields, while also limiting greenhouse gas emissions.

The growing move to climate-smart agriculture is strongly supported by dozens of organizations such as the World Bank, the United Nations Food and Agriculture Organization, and the CGIAR Consortium, a network of 15 international research centers that work to advance agriculture research globally. The Global Alliance for Climate-Smart Agriculture, launched last September, aims to strengthen global food security, improve resilience to climate change, and help 500 million small farmers adapt to more stressful growing conditions.

One rationale behind climate-smart agriculture is that yield gains from the Green Revolution have stagnated.

Another rationale behind climate-smart agriculture is to adjust to the new growing conditions in a sustainable fashion because yield gains experienced in the Green Revolution — particularly with rice and wheat — have stagnated. Using seeds specifically bred to withstand certain temperatures or moisture levels, coupled with better water management, can help to keep improving agricultural productivity.

For example, in Rwanda projects include better management of rainfall on steep hillsides and terracing that prevents water runoff and erosion. In Senegal, various organizations are providing planting, growing, and harvesting information to women, who do the majority of farming but have historically not benefited from agriculture extension services because communications have focused on crops men tend to grow, such as corn, sorghum, and millet. The women receive text-message alerts and information on blackboards at community outposts to provide them with advice on seeds, fertilizer, planting methods, or weather patterns that affect the crops women commonly cultivate, including rice, tomatoes, and onions.

Researchers at the International Center for Tropical Agriculture (CIAT) in Colombia teamed up with Fedearroz — the Colombian rice-growers association — and the Colombian Institute of Hydrology, Meteorology, and Environmental Studies to analyze climate and rice production patterns in selected regions of Colombia. Andrew Jarvis, director of the decision and policy analysis program at CIAT, says that through analysis of big data, researchers and trade groups can provide rice growers with specific recommendations to improve production practices and avoid the worst impacts of climate variability.

Farms in tropical regions and in the developing world are particularly vulnerable to climate extremes, says Jarvis, because they don’t have access to good irrigation or reservoirs during the dry season. Farmers have survived by being good at adapting and adjusting to patterns of rain and weather, but increasingly erratic weather fluctuations and the pace of change can overwhelm traditional methods of coping, he points out.

For farmers like Mejia, who plant new fields each month to maintain a continuous cash flow, shifting production to a certain period each year runs counter to what farmers learned from their fathers and grandfathers. But increasingly unstable weather in recent years has left many farmers more willing to try new ideas. “They realize that climate change is a long-term threat,” says Jarvis. “In the short term, it is showing itself as climate variability and so we need to adjust to it.”

Mejia is a numbers guy and keeps careful records of his farm. Most of his recent agriculture modifications have proven successful, such as planting new kinds of rice and using greater precision of flooding the paddies exactly when they need water — hence the humidity meters. Each day he checks how much nitrogen the plants need and consults the weather equipment at the farm, such as how much rain has fallen, the wind speed, the high and low temperatures, and, most importantly, a forecast that now extends to eight days.

Previously, his rice paddies used a water rotation pattern of three to four days of flooding before they were drained. His rice grower’s association told him he can get away with flooding the fields every five to eight days if he measures moisture levels in the soil. Still, the worst effect on yields has been extreme weather, and his yields have dropped 30 to 40 percent in the last two years because of a drought. As a result, he has started planting fewer fields during droughts since investments in seeds and fertilizer will almost surely be lost, he says. 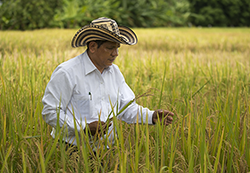 Another Colombian farmer, Oscar Perez, plants 320 acres of rice annually, in addition to corn and cotton, on his farm in the hot and humid area of Cordoba near the northern Colombian coast on the Caribbean. Following the advice of Fedearroz and CIAT, Perez has begun not planting fields to avoid losing seed and incurring the expense of fertilizers and labor costs that cannot be recovered.

“When there is no rain, you just don’t produce,” says Perez, who has operated his farm for the past 15 years. Perez has begun taking advantage of better weather forecasting and also avoids applying fertilizer when heavy rains are predicted so it will not be washed away. In addition, he is using better seed selection to gain improved yields for conditions that are determined to be wet, dry, or moderate that season.

The variety of methods that are being called “climate-smart” vary greatly and cut across all areas of farming. For example, climate-smart-inspired agricultural changes in rice farming in Vietnam include a greater focus on more effectively alternating the flooding and drying of rice paddies. The rice farmers do not rely on traditional transplanting of rice seedlings into flooded fields as a means of weed control. That reduces the release of the powerful greenhouse gas methane, which typically emanates from flooded fields.

If serious efforts aren’t made to slow climate change, innovative agricultural techniques can only accomplish so much.

Rather, the method now being used in Vietnam relies more on chemicals to control weeds. The use of chemicals can contaminate the water, but the tradeoff means the rice crop is spared from the debilitating effects of drought, while farmers achieve intensified production and increased yields. As a result, farmers in Vietnam have reduced the amount of seed used per field by 70 percent, reduced water use by 33 percent, and cut the application of nitrogen fertilizer by 25 percent, according to CGIAR research. In addition to detailed monitoring of water levels in the soil, the farmers use high-yield seeds bred with traits that can withstand the occasional soaking of saltwater caused by rising seas.

Chris Hegadorn, director of global food security at the U.S. State Department, said that the U.S. decision to join the Alliance for Climate-Smart Agriculture represents an important step in “integrating climate change policies into all areas of our work.” He added that climate-smart agriculture “will help protect lives and livelihoods, especially for the tens of millions of vulnerable small-holder farmers around the world.”

ALSO FROM YALE e360In the Pastures of Colombia, Cows, Crops and Timber Coexist

But some experts involved with global development say that, in itself, climate-smart agriculture will be insufficient in a world of rising temperatures and soaring populations, especially in places like Africa. Interventions at the farm level can only go so far if water is unavailable or soils degrade. It’s necessary, experts say, to look beyond the farm and manage entire landscapes that support people, food production, and nature.

Seth Shames, director of policy at the non-profit group, EcoAgriculture, says that preserving the ecosystems of an area — including forests and wetlands — will become an essential part of supporting agriculture. But he warns that if serious efforts aren’t made to slow climate change, even the most innovative agricultural techniques can only accomplish so much.

“If projections are correct, the destruction that will occur in agriculture will be so severe that those kinds of solutions will be swamped by reality and God knows what will happen,” says Shames. “In 20 to 25 years we will get to a point in some places that either it will be too hot, too dry, too wet, or too cold for the crops you are planting and you will have to put something else in its place, which will be incredibly disruptive at best.”