Earlier this year a major victory appears to have been won in the ongoing battle to resurrect island ecosystems and, in the process, save otherwise doomed species. It was achieved not by manipulating habitat or introducing native species, but by killing aliens — rats.

In late March “Team Rat” — composed of eradication experts from around the world — completed a five-year baiting program on British-owned South Georgia Island in the southern Atlantic.

Before rats arrived on ships of 18th-century seal hunters, South Georgia Island had sustained 27 species of seabirds in the world’s greatest concentration. But the invaders feasted on eggs and hatchlings, eliminating an estimated 90 percent of all birds on this sub-Antarctic island. By the 21st century, the South Georgia pipit, a terrestrial species found nowhere else on earth, was headed for almost-certain extinction.

The Team Rat project dwarfed all rodent eradications previously attempted. The island’s 1,450-square-mile surface is strewn with jagged, ice-bound peaks, 11 of them over 6,500 feet. What’s more, Team Rat — put together by the South Georgia Heritage Trust — was racing global warming. Glaciers kept rats out of large sections, but these barriers were melting rapidly. Two glaciers had already been lost, allowing the infestation to spread. Without the remaining glaciers, the northern and southern coasts would be united, and surviving birds would be history.

It will be another two years before Team Rat can positively declare the island rodent-free, but the prognosis couldn’t look better. Surviving glaciers sealed off three sections that could be treated independently. Birds are already recovering in sections completed in 2011 and 2013; and careful monitoring has revealed no sign of rats. In January 2015 the first successful nest of the South Georgia pipit was discovered in the 2013 section. At this writing, the project appears to be humanity’s first success in saving a species from the effects of global warming.

More than 80 percent of some 500 island rodent eradications have been conducted by eight nations — New Zealand, Australia, France, Mexico, Seychelles, Ecuador, the U.K., and the United States. Now with global warming, the pressure is on as never before. U.S. Fish and Wildlife Service biologist Beth Flint, who recently helped recover the rat-destroyed ecosystem of Palmyra Atoll National Wildlife Refuge 1,000 miles south of Hawaii, says the international environmental community needs to start thinking about islands that will be wiped out by sea-level rise or more intense storms. The time may come, she warns, when we’ll have to move species to islands with more temperate climates or higher elevations.

Rats have been responsible for an estimated 40 to 60 percent of extinctions of island birds and reptiles.

There are plenty of islands sufficiently high and sufficiently situated to serve as refuges for wildlife threatened by global warming. But rodent infestations are most common on high, temperate islands because they are the most likely to have been colonized by humans.

Historically, wherever humans have traveled by sea, rats and mice have accompanied them. Two thousand years ago rodent stowaways on Polynesian vessels infested Pacific islands. More recently, the plague spread to all the world’s oceans. And birds weren’t the only victims. The aliens eliminated reptiles, invertebrates, whole forests, and other plant communities along with the seeds and fruits that had sustained native wildlife. Ecosystems lay in ruins. 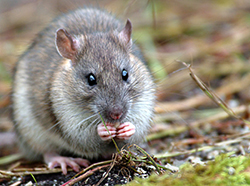 Despite the fact that islands comprise only three percent of the planet’s landmass, 95 percent of all known bird extinctions occur on them. According to The Nature Conservancy, a world leader in rodent eradication, rats alone have been responsible for an estimated 40 to 60 percent of recorded extinctions of island birds and reptiles.

To recover South Georgia’s ecosystem, Team Rat needed a nuke. Fortunately, it had one in brodifacoum — an anticoagulant that inhibits production of vitamin K, thereby causing rodents to bleed out internally. This second-generation rodenticide was registered in the U.K. in 1978 after rats built immunity to the first-generation version, warfarin — the same agent doctors prescribe to thin human blood. Team Rat dropped tons of brodifacoum-laced bait from helicopters.

Unlike its first-generation ancestors, brodifacoum is lethal to rodents when ingested just once. And because it’s slow-acting, rodents don’t associate it with danger. They carry bait into otherwise inaccessible caves and crevices, hoarding and sharing it. Word gets out fast that it is delicious and safe.

Before 1978 rodent eradication, except on the tiniest islands, had been unthinkable. A year later New Zealanders were deploying brodifacoum with stunning success. When biologists Rowley Taylor and Bruce Thomas declared that brodifacoum could clear rats from the huge (by those early standards), 22-acre forest island of Hawea, their boss at the New Zealand Department of Science and Industrial Research dismissed the notion as “impossible” and “f***ing crazy.” When Taylor and Thomas pulled it off, the world took note.

Brodifacoum can cause secondary poisonings when non-target species like raptors eat dead rodents.

Brodifacoum poses little danger to marine life because it’s insoluble in water. But it can cause secondary poisonings when non-target species like gulls and raptors eat dead and dying rodents. While wildlife managers have learned to minimize such “bykill,” they can’t eliminate it. Loss of a few individuals is the price for recovering island ecosystems and saving entire species from extinction. In virtually all cases there is no effective tool other than brodifacoum. And in all cases populations of non-target victims bounce back.

But recovery of island wildlife is being hampered by brodifacoum’s vile reputation, a reputation acquired by gross public abuse on mainlands where it routinely kills or sickens dogs, cats, and wild animals. So brodifacoum is a favorite target of animal-rights activists and the global environmental community.

On March 31, barely a week after rodent eradication had wrapped up on South Georgia Island, the last pelletized brodifacoum bait available to the U.S. public (sold as d-Con) was taken off the market by its manufacturer, Reckitt-Benckiser. As early as 2008 the U.S. Environmental Protection Agency had declared brodifacoum an “unreasonable risk” to children, pets, and wildlife when used in pellet form by the public (not by wildlife managers). Other companies voluntarily took brodifacoum off the market, but Reckitt-Benckiser refused, tying up further action by the EPA with appeals and litigation. Finally, in May 2014, it signed an agreement with the EPA, rendering moot the agency’s Notice of Intent to Cancel issued the previous year.

Brodifacoum harms pets and wildlife only because in many nations the public flings crude commercial formulations around like confetti — not because professional wildlife managers treat islands with short-lived formulations carefully designed for each situation.

Rachel Carson had no problem with short-lived poisons deployed against invasive exotics.

Nowhere is there a shortage of opposition to brodifacoum use on islands, but it’s loudest in the U.S. This may be because so many Americans have misread Rachel Carson’s book “Silent Spring,” which precipitated the U.S. ban on DDT and its relatives. Carson, a biologist, had no problem with short-lived poisons deployed against invasive exotics; and if she were alive today she would be an ardent supporter of alien rodent eradication.

Serious public opposition in the U.S. started back in 2001. That’s when Island Conservation (a non-profit group specializing in ridding islands around the world of alien invaders), the National Park Service, and other partners set about clearing black rats from Anacapa Island, part of a national park off southern California. Litigation delayed the project. Typical comments in op-eds and letters to the editor collected by William Stolzenburg and reported in his 2013 book Rat Island included: “Who are humans to call other species invasive?” and “Species go extinct all the time.” Park rangers were obliged to arm themselves and wear bulletproof vests. Just before the first bait application, field crews observed two men jump out of an inflatable boat and start tossing pellets, later found to contain vitamin K — brodifacoum’s antidote.

Before rats disembarked from the grounded paddle steamer Winfield Scott in 1853, Anacapa Island had been a haven for nesting seabirds. Unlike most other islands it sustained a native rodent, the Anacapa deer mouse. Managers captured as many native mice as they could before treatment, then released them after the brodifacoum had degraded. There was limited bykill of birds and uncaptured deer mice. But populations of all non-target victims swiftly recovered; and today the island is again pumping out seabirds. Nesting success for the imperiled Scripps’s murrelet, for example, is up 400 percent. And ashy storm-petrels, classified as endangered by the International Union for Conservation of Nature, are nesting on the island for the first time in recorded history. Still, brodifacoum use by wildlife professionals remains controversial, especially in the U.S.

Environmental activist Maggie Sergio of Fairfax, California is arguably the planet’s most energetic critic of brodifacoum use on islands no matter the situation or ocean. Four years ago, while she was employed by WildCare — a wildlife rehabilitation outfit in San Rafael, California, that treats sick and injured animals, including alien pests like house mice — she started an online petition to cancel a house-mouse eradication project on the Farallon Islands, a national wildlife refuge 28 miles seaward of San Francisco and site of the largest seabird colony in the sub-Alaskan U.S.

Who are humans to call other species invasive?’ asked an opponent of a rat eradication project.

This “crime against nature,” as Sergio calls it, is planned by the U.S. Fish and Wildlife Service. About half the ashy storm-petrels in the world nest on the Farallones, and one of the agency’s main goals is to save the species from extinction. With her petition, frequent posts on the website of a group she co-founded called Island Watch, and articles in the Huffington Post, Sergio has generated sufficient opposition from the animal rights community, the general public, and the City of San Francisco to place the project in doubt.

Vultures are being killed on an unprecedented scale across Africa, with the latest slaughter perpetrated by elephant poachers who poison the scavenging birds so they won’t give away the location of their activities.
READ MORE

As of mid-July nearly 33,000 people from multiple nations had signed Sergio’s petition. Among its copious false statements is the claim that in 2008 Island Conservation dropped “40 tons of brodifacoum” on Rat Island, off southwestern Alaska.

There isn’t enough brodifacoum in the world to drop 40 tons anywhere. What really happened is that Island Conservation, partnered with the Fish and Wildlife Service and The Nature Conservancy, dropped 41 ounces of brodifacoum on Rat Island — this for the entire 6,861 acres. The rodenticide was mixed with 46 metric tons of grain bait. Such is the brodifacoum’s lethality. If you use anything else, the chance of failure increases exponentially; and all it takes to fail is survival of two rodents of the opposite sex or one pregnant female.

An unprecedented early snowfall covered and preserved the bait, and bald eagles, off their routine of feeding on distant salmon, ate the rats. So the bykill price was exceptionally steep — 422 birds, including 46 eagles and 320 glaucous-winged gulls. That’s why the project is invariably the first cited by opponents. But even on Rat Island the permanent dividends far exceeded the temporary investment. An enormous assemblage of native bird species absent or nearly so for 230 years are nesting again; a rat-made desert has exploded with native vegetation; and populations of non-target victims are thriving.

Today the island goes by its original Aleut name, Hawadax, which translates, appropriately enough, to “Welcome.”