The first time Arno Grobler visited the office of the ≠Khoadi-//Hôas Conservancy in northwestern Namibia, he was, he admits, “flabbergasted.” The conservancy has the job of managing wildlife, and drawing income from it, on a 1,400-square-mile patch of desert. It is starkly beautiful red rock country, inhabited by rhinos, elephants, lions, leopards, cheetahs, and other wildlife.

But conservancies in Namibia are run by local community groups, often livestock farmers with little education, limited experience in double-entry accounting, and no love for predators. About 4,000 people live in the ≠Khoadi-//Hôas area (those punctuation marks represent clicks and pops in the local NÃ mÃ¡ language), and cattle frequently camp out on the only intersection for miles.

So what startled Grobler, who had just become manager of a tourist lodge there, was how “clued up” the conservancy seemed to be: Slick full-color posters on the walls listed rare and endemic species. Three-ringed binders on the shelves recorded cases of human-wildlife conflict. And the business manager used an Excel database on her laptop computer to track the conservancy’s annual budget. Turning to his partner, Grobler whispered, “I think we’re in for something completely different.” 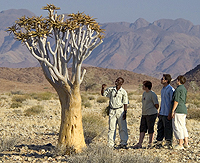 It’s a thought that’s liable to occur to any visitor checking out Namibia’s system of conservancies, if only because the idea of having communities manage their own wildlife — though much talked about elsewhere — actually seems to be working there. Starting from nothing in 1998, Namibia now has 64 community conservancies, covering about 17 percent of the national land area, slightly more land than is in national parks or other forms of state protection.

The conservancies aren’t parks; most residents continue to work herding livestock. But they set aside a portion of their common land — 30 percent in the case of ≠Khoadi-//Hôas — exclusively for wildlife. The vision, as a farmer and field officer at another conservancy put it, is to “give benefits and create jobs through consumptive and nonconsumptive uses of wildlife” — that is, hunting and tourism.

It has worked so well that the Ministry of Environment and Tourism now often translocates animals — including critically endangered black rhinos — out of overcrowded national parks onto unfenced conservancy land, where they have room to recover to their former numbers. The community’s material interest in the wildlife also means there are enough watchful eyes to limit poaching. The result is that, where Kenya and many other African nations are rapidly losing their wildlife, Namibia has registered a sharp increase.

The community conservancy idea works in Namibia for one obvious reason: Just 2.1 million people live in this arid country on the southwest coast of Africa, and six people per square mile make for a better mix with wildlife than the 158 in Kenya, or the 94 in neighboring South Africa. Namibia has also enjoyed a run of favorable rains since the mid-1990s, helping prey species like springbok and gemsbok, and thus lions and other predators, too.

‘We had to mobilize the people. They didn’t want to live with predators and the elephants,’ a community leader says.

But one almost unimaginable change in the mid-1990s gave the conservancy concept special credibility in Namibia: The national government turned ownership of the wildlife back to the people. If that does not seem like a bold idea, think of it as if the U.S. Fish and Wildlife Service handed gray wolf recovery over to cattle ranchers in Wyoming (which, incidentally, has a comparable population density of just 5.1 people per square mile).

Liberation politics played a key part in this innovation. Until 1990, Namibia was administered by South Africa’s apartheid government. Private landowners, mostly white, had enjoyed the right to exploit the wildlife on their properties since the 1970s. But the government then regarded the idea of “giving ownership to the subversive black community” as lunacy, says Namibian environmentalist Margaret Jacobsohn.

After independence, though, community ownership “fit with the rhetoric of SWAPO,” the former liberation movement that is now Namibia’s dominant political party, adds Garth Owen-Smith, the grand old man of the Namibian environmental movement. “It appealed to the more idealistic elements of our government,” as well as to those who “wanted to lash out at all the South African laws. It almost slipped in before people realized it.”

The CAMPFIRE program, launched in Zimbabwe in the 1980s, served as a model for the idea of community-based wildlife management. But a home-grown precedent also made this approach seem practical: In the 1980s, Owen-Smith had successfully fought poaching in northwestern Namibia by hiring community game guards and having them report not to him, but to their traditional leaders. “That gave them ownership,” at least symbolically he says. 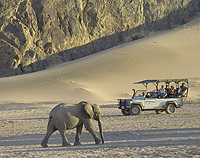 Literal ownership wasn’t something communities in Namibia were sure they wanted, in the beginning. “First we had to mobilize the people,” says Hilga Howoses, who helped organize ≠Khoadi-//Hôas in 1998 as one of the first registered conservancies. “They didn’t want to live with predators and the elephants, but we mobilized them. The Ministry of Tourism and the Environment gave us the awareness that benefits will come in the future.” Actually getting to those benefits was — she sighs — “quite difficult. If you start something from scratch you don’t have any idea how to begin, how to organize.”

But the ≠Khoadi-//Hôas Conservancy now earns about $172,000 a year — big money in a rural culture where people live on a dollar a day — and has created jobs for more than 30 area residents. Overall, conservancies earned about $5.3 million in direct income and generated about $40 million for the Namibian economy in 2009.

The money comes from a mix of uses. Trophy hunting is typically the first source of revenue. “If you have a vehicle and a canvas tent, then almost overnight a conservancy can be covering its costs,” says Greg Stuart-Hill of the World Wildlife Fund in Namibia. “If people have to wait 10 years for benefits, they might just walk away and go back to livestock.” The government still sets limits based on sustainability, but trophy fees range from $1,000 for a kudu up to $25,000 for an elephant, so “people see that the wildlife does have value,” says Chris Weaver, WWF’s managing director, “and poaching stops almost overnight, because you’re no longer stealing from the government, you’re stealing from your neighbors. It becomes socially unacceptable.”

‘The economy of the country is going up because of these animals,’ says one villager.

Though they are harder to get established, safari lodges for camera tourists are a larger source of both income and employment. Outside companies typically build and run them in partnership with the conservancies, and Namibia now has 44 such joint ventures, providing 800 full-time jobs. “Responsible tourism is the way to do it,” says a member of the staff at one such safari lodge, Desert Rhino Camp. “People see the benefits. They see the opportunities for their children. All the guys who work here grew up as herd boys. Now they are trackers, guides, head waiters, some of them are even managers.”

The social psychology can prove more challenging than the double-entry accounting. For instance, hunters and tourists need to be zoned in separate areas, or separate seasons, because neither wants to know that the other exists. “You don’t want hunters sitting in the same bars and restaurants talking about their hunt that day with people who are talking about the beautiful baby animals they’ve just seen,” says Weaver.

More seriously, ancient hostilities familiar to all livestock farmers still inevitably surface, especially as new management practices increase the number of predators. At ≠Khoadi-//Hôas, incidents involving problem animals (“baboon killed two goats,” “jackal killed one goat,” “leopard killed one donkey”) have risen from just 35 in 2001 to almost 300 last year. A few miles from the conservancy office, for instance, John Tijpute, 41, says he recently lost six sheep when a leopard came into his corral one night. He has only two sheep remaining for his family of eight, and like livestock farmers everywhere, he wants to be compensated for the loss. But then he also adds: “The conservancy is protecting our animals, which the tourists are coming in to see. The economy of the country is going up because of these animals.”

That phrase, “our animals,” and the subtle change in attitude it implies, has delegations visiting from around the world to see if they can replicate the Namibian experience. Nepal wants to try it to protect its tigers and rhinos, says Owen-Smith, and Mongolia is interested in finding a better way to manage its argali sheep. He urges them not to omit the one essential change they may find hardest to stomach in the way they manage wildlife: “Do it according to your own laws and bureaucracy, but give the ownership back.”

On private land, meanwhile, the Namibian model is already taking hold in the U.S. in the Sand Hills of Nebraska, where the traditional cattle ranching culture can provide a meager living at best. The Grassland Foundation there now regularly sends scholars and interns to community conservancies in Namibia. The idea, says Grassland’s president Tyler Sutton, is to find ways to do better by wildlife and earn better returns for ranchers in the Northern Great Plains. As a result, three privately-owned ranches have already begun collaborative planning on how to benefit from their resources, moving beyond cattle into bird-watching, hunting, horseback riding, and river trips.

And, if it works, who knows? From the Sand Hills of Nebraska, the cattle ranchers of Wyoming are practically next door.