The Sand Hills of Nebraska are a unique Great Plains prairie ecosystem. The rolling dunes, rising to 300 feet, cover about a quarter of the state, and because the grasses and wildflowers there are adapted to wet, sandy soil, many grow nowhere else. Thousands of ponds and lakes dot the Sand Hills, nourishing the Ogallala Aquifer.

This region is an unlikely ground zero for a growing rebellion against a different kind of sand — the Athabascan oil sands of Alberta, 1,400 miles to the north. But that is precisely what is happening as energy companies seek to construct a pipeline from Alberta’s tar sands — the second-largest petroleum deposit in the world, after Saudi Arabia — across the length of the U.S. to refineries in Texas, passing through the Sand Hills on its way.

And the so-called Keystone XL pipeline is not the only tentacle of the tar sands poised to spread across North America: Energy companies are seeking to build a second pipeline to carry tar sands oil across the wild heart of British Columbia, while other firms are proposing to truck gargantuan equipment for the tar sands project along narrow roads in one of most remote parts of the northern Rocky Mountains.

The fight over the pipelines has become a proxy battle between two diametrically opposed worldviews.

Environmentalists, farmers, ranchers, elected officials, native people, and a host of others have risen up in opposition to the potential environmental threats posed by the expanding reach of Alberta’s tar sands. Some opponents are concerned that pipelines or oversized equipment running through their communities pose an unacceptable environmental risk. But for others, the battle is about something far larger. They believe that wreaking so much environmental destruction to continue expanding supplies of planet-warming fossil fuels is fundamentally wrong, noting that the tar sands project has razed hundreds of square miles of boreal forest, led to the creation of dozens of toxic tailings ponds, and released vast quantities of CO2. And they are convinced that choking off the tar sands pipelines is a way of stopping, or at least hampering, the development of the Alberta tar sands themselves.

Indeed, the fight over the tar sands pipelines has become a proxy battle between two diametrically opposed worldviews: Those who see the planet as heading toward irreversible environmental harm, driven largely by human CO2 emission from fossil fuels, and those who say that the U.S. needs oil at almost any environmental cost to keep its economy growing.

“The pipeline has become a symbol of where America is going,” says Jane Kleeb, director of BOLD Nebraska, a group working to protect the unique ecology of the Sand Hills. “We’re concerned about climate change, absolutely. America is smart enough to figure out how to do clean energy.”

Among the growing protests over Alberta’s tar sands and the proposed pipelines are a series of acts of civil disobedience planned in Washington, D.C., for the last two weeks of August. The campaign, Tar Sands Action, will feature protests at the White House and will include author and environmental activist Bill McKibben, NASA climate scientist James Hansen, and Canadian scientist and broadcaster, David Suzuki. 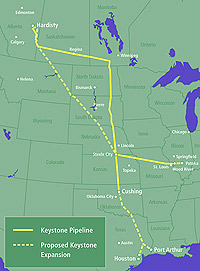 Roughly 173 billion barrels of Alberta tar sands reserves, worth more than $15 trillion, underlay an area the size of Florida, making it by far the largest petroleum deposit in North America. The strange solid or semi-solid oil, called bitumen, is essentially mined, and doing so means digging up large tracts of boreal forest and releasing a lot of CO2, which is why critics call the product of the tar sands “dirty oil.”

Oil companies have limited refining capacity for the dense crude in Alberta, and that’s where the biggest pipeline project, Keystone XL, figures in. Each day the proposed Keystone XL pipeline — to be built by Calgary-based TransCanada Corporation — would move 910,000 barrels of a slurry of bitumen, natural gas, and undisclosed chemicals through a 36-inch-diameter, high-pressure pipe, buried four feet underground. The nearly 1,700-mile route would run from Hardisty, Alberta, through Saskatchewan, Montana, South Dakota, Nebraska (including 92 miles of the Sand Hills), and Oklahoma. After connecting with an existing pipeline in Nebraska, the new Keystone XL would begin again in Cushing, Oklahoma and continue on to Houston and Port Arthur, Texas. There, company officials say, they would have the special refining capacity they need.

The $7 billion pipeline, which must be approved by the U.S. State Department and the Environmental Protection Agency (EPA), has drawn both opposition and support across its route. But it has run into the fiercest resistance in the conservative farming state of Nebraska, largely because the pipeline would cross the Sand Hills. Should the toxic brew leak, it could pollute not only the water there, but could seep into portions of the Ogallala Aquifer, the 174,000-square-mile underground reservoir, fed in part by water from the Sand Hills.

Spills are not a far-fetched scenario. In a year of operation, a similar pipeline in the U.S. — the existing Keystone, also owned by TransCanada Corporation — had 11 spills. Most of them were tiny, but the largest, in southeastern North Dakota, was 21,000 gallons, and federal officials temporarily suspended the company’s operating permit. And last year a 30-inch oil pipeline owned by Enbridge, another Canadian pipeline company, suffered a 4-foot-long rupture and spilled nearly 20,000 barrels — 840,000 gallons — of oil into the Kalamazoo River in Michigan, killing much of the aquatic life for miles. It was the worst spill ever in the Midwest.

John Hansen, president of the Nebraska Farmers Union, whose members oppose the pipeline, said a big problem is the involvement of the U.S. State Department, which he says isn’t equipped to assess the environmental risks of Keystone XL. “They are out of their element,” he said. Nor has the state of Nebraska exercised oversight, said Hansen. “In this void, TransCanada took the short cut through some of the most environmentally sensitive land you could build a pipeline through,” he said. “It’s very fragile. The water is close to the surface and in the spring, water would cover some of the pipeline. To anybody who knows anything about the Sand Hills, the thought of running a toxic pipeline through your water supply makes no sense.”

Petroleum pipelines that carry diluted bitumen, or “dilbit,” pose special risks. Dilbit pipelines use higher pressure and higher temperatures and need chemicals to keep the thick, tarry substance flowing. Some data suggests they suffer more ruptures because of these temperature and pressure extremes.

But the real problem, says Carl Weimer, the director of the Pipeline Safety Trust — set up after three young boys were killed by a gasoline pipeline rupture, explosion, and fire in Bellingham, Washington in 1999 — is that so little is known about dilbit pipelines. “We’ve asked those types of questions to the Department of Transportation and haven’t gotten an answer,” says Weimer. “Unfortunately no one has looked into these things.” The director of the U.S. Department of Transportation’s Pipeline and Hazardous Materials Safety Administration, Cynthia Quarterman, testified recently to Congress that existing safety and environmental regulations fail to take this new kind of pipeline into account. Environmentalists have criticized Quarterman for her ties to the oil and gas industry, including providing legal counsel to the Enbridge pipeline company before joining the Obama administration. 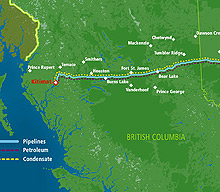 Enbridge
A second proposed pipeline would extend 730 miles across the wild heart of British Columbia. See the map.

It seemed at first that the approval process for the continent-crossing pipeline would be perfunctory. Because of the international aspect of the project, the environmental studies are being conducted by the U.S. State Department, which approved a previous Keystone pipeline, which runs from Canada to Oklahoma, with little notice. The chief lobbyist for the pipeline company, Paul Elliot, was a deputy campaign manager for Secretary of State Hillary Clinton’s presidential run, and last year Clinton said she was “inclined” to approve the pipeline, long before the environmental studies were completed. As an outcry arose, Clinton backpedaled, and said she hadn’t made up her mind.

The final environmental impact statement on Keystone XL is due in August, after which hearings will be held in states affected by the pipeline and in Washington, D.C. A decision could come by the end of the year. “If we get the permit we’ll begin construction in early 2012,” said Cunha. The EPA has twice given very poor grades to the State Department’s environmental review, most recently in early June.

Another major front in the battle over the tar sands’ tentacles involves a proposed pipeline and a new tanker port in Canada. Enbridge Inc., whose pipeline spilled crude oil into the Kalamazoo River last year, is proposing a $5.5 billion double-pipeline called the Northern Gateway that would move oil west from Alberta, across 730 miles of British Columbia, to two giant oil tanker loading docks it proposes to construct at the eastern end of a fjord at Kitimat, British Columbia. (The second parallel line would move liquid natural gas to Alberta.) That part of the proposal is controversial, too, for many on the coast of British Columbia have been opposed to oil tanker traffic since the 1989 Exxon Valdez oil spill in Alaska.

‘We don’t have the option of choosing zero environmental problems,’ says one energy expert.

Earlier this year though, several First Nations tribes, who own a quarter of the land the pipeline would traverse, rejected an agreement with Enbridge, in spite of a revenue sharing offer that would mean more than a billion dollars to the tribes. Geraldine Thomas Flurer, a spokesman for the Yinka Dene Alliance near Vanderhoof, British Columbia, said no amount of money could replace the hunting and fishing that sustains the remote towns, should a pipeline rupture. “Moose hunting, salmon fishing, sturgeon, this is something that we do every day, this is who we are,” she said. “The pipeline would cross nearly a thousand rivers, lakes and streams, and one leak could destroy what we have, who we are.” Those rivers include the Fraser and the Skeena, both highly productive salmon fisheries.

Michael A. Levi, an energy and climate change analyst for the Council on Foreign Relations, said that both the energy security issue cited by proponents of the tar sands oil and environmental problems raised by those against the pipelines, are overblown. “All energy development comes with environmental issues,” he said. “We don’t have the luxury of choosing the option of zero environmental problems.” As far as the Keystone XL pipeline, “I don’t like betting, but if I did, I bet it would get built.” The Northern Gateway was less certain, he said, not because of the pipeline, but because of the concern over tanker traffic after the Exxon Valdez disaster.

On a third front involving the tar sands, Imperial Oil, a subsidiary of ExxonMobil, is seeking permission to move 207 giant modules — three stories high, more than 200 feet long, and 24 feet wide — for oil production at Kearl Oil Sands, a new mine in the tar sands. The oversized equipment would travel along a winding, two-lane highway that crosses some of the wildest country in the Lower 48 state; the route was chosen because, unlike interstate highways, there are no overpasses. Environmentalists and locals have organized against the modules, objecting to an industrial corridor that would carry gargantuan equipment through such wild country.

Barry and Bobby Bartlette are co-owners of the Lolo Square Dance Center and Campground, located along the proposed equipment route. They worry that campers with trailers will avoid Highway 12, and that road-widening could harm the water quality of Lolo Creek.

And like many other opponents, they object to the large-scale destruction associated with the tar sands project. “Taking out forests to get oil is devastating and the impacts downstream are devastating,” Barry Bartlette said. “There’s more oil they can drill for and not have those impacts.”