The island of Mauritius was settled by Dutch sailors in the 1600s. Within a few decades, all the large, native fruit-eating animals, or frugivores, had been driven to extinction. The lost included not only the famous flightless dodo, but also a giant lizard and two species of tortoise. The demise of these creatures reverberated through the island’s ecosystem, affecting fruiting plants that had co-evolved with the local frugivores and relied on them to spread their seeds onto fertile ground.

Today native Mauritian plants, under siege from a tide of invasive competitors and predators, hang on only in a few small conservation management areas. Even where invasive plants are laboriously weeded out by hand, large-fruited native tree populations are dwindling because of a lack of fruit-eating animals to disperse the trees’ seeds. 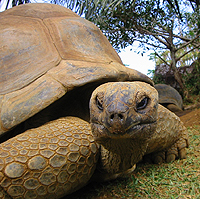 Photo courtesy of Joachin S. Muller/via Flickr
On an islet off Mauritius, Aldabra tortoises rescued at least one endangered plant by spreading intact seeds in the landscape.

But Dennis Hansen, an ecologist at the University of Zurich, believes there is an efficient, practical way to restore some of Mauritius’ lost ecological dynamics: Bring in large tortoises from other island chains as substitute seed dispersers to fill the niche of the extinct native tortoises. As part of a restoration effort on Ile aux Aigrettes, an uninhabited islet off the Mauritius coast, the Mauritius Wildlife Federation and the Mauritius government in 2000 introduced giant Aldabra tortoises to test whether the tortoises could help revive native vegetation. The tortoises are now dispersing the seeds of several native plants and are knocking back an invasion of the exotic tree, Leuceana leucocephala, by devouring its seedlings. The introduced tortoises began breeding in 2003 and have produced more than 200 offspring, some of which are being reared in captivity for later release in restoration projects on nearby Round Island and Rodrigues Island.

The Aldabras have rescued at least one endangered plant — Diospyros egrettarum, a species of ebony endemic to Mauritius — by devouring the ebony fruits and defecating intact seeds as they roam through the landscape. Restricted to one small surviving patch of plants before the arrival of the tortoises, ebony seedlings now sprout all over the islet, spears of new life rising out of tortoise dung.

Even forests that appear intact are fated to change dramatically when large frugivores are lost.

The loss of seed dispersers is a serious problem in tropical forests worldwide. Even forests that appear intact in terms of their vegetation are fated to change dramatically when large frugivores are lost. In the Peruvian Amazon, hunting of large monkeys for bushmeat has altered the shape of the forest, as seedlings of plants with wind-dispersed seeds come to dominate. In heavily hunted parts of Ngotto Forest, in the Central African Republic, the disappearance of large animals — including primates, elephants, and hornbills, a group of fruit-eating birds — led to a drop in the diversity of young trees. The trees that declined were all large-seeded, including cola nut and African star apple.

In Brazil’s Atlantic rainforest, when hunting knocked down numbers of agouti — a large native rodent that caches seeds underground — an endemic species of palm was less likely to produce successful new seedlings. In Uganda, the krobodua tree bears large fruits, and appears completely dependent on a dwindling population of forest elephants to aid its reproduction. In Roraima, Brazil, the movements of tapirs can be mapped from the air by charting clumps of indigenous palm trees that sprout out of tapir dung. The tapir, like most large native mammals of the tropics, is threatened by the impacts of both bushmeat hunting and habitat loss.

Over the past 30 years, ecologists have begun to explore in greater depth the partnerships between fruiting plants and the animals they feed, particularly in the tropics. They’ve uncovered striking shifts in the plant communities of forests that have lost their large native frugivores. In tropical rainforests, about 70 percent of tree species need animals to disperse their seeds. (Seeds that fall beneath the parent tree are often targeted by beetles and rodents that devour them before they can sprout. Those that do germinate face stiff competition for light and space). As forest clearing and hunting for bushmeat accelerate across the world’s tropics, wildlife populations continue to dwindle. As a result, regenerating forests are dominated by trees whose seeds travel by wind or water, while those that produce large, hefty seeds designed to travel via animals are in decline.

The most insidious kind of extinction, notes Hansen, is the loss of interactions. “Species interactions can be more important than species identity,” he says. “What’s vital is to have a healthy set of relationships that provide pollination, seed dispersal, herbivory, predation, decomposition. It’s the dynamics that need to be up and running.”

Hansen and his colleagues have studied Syzygium mamillatum, a critically endangered endemic tree, inside a conservation management area in Black River Gorges National Park on the main island of Mauritius. Each year the few surviving S. mamillatum trees sprout thousands of bright pink flowers low on their trunks. After the flowers fade, the plants form large fruits, which seem perfectly adapted to lure tortoises.

About 70 percent of tree species in tropical rainforests need animals to disperse their seeds.

The researchers could find no new S. mamillatum seedlings growing more than a meter or two away from adult plants, and experimental plantings done from 2004 to 2006 showed that seedlings survive over time only when they sprout at a distance from adult trees. So in moving seeds away from the parent plant, the introduced Aldabra tortoises on Ile aux Aigrettes provide a valuable service. But that’s not all. Hansen and his colleagues fed S. mamillatum fruits to captive tortoises, and found that seeds that passed through tortoises and dropped to earth in a package of nutrient-rich feces produced healthier, more robust seedlings than those that were not processed by tortoises. (Many fruiting plants produce seeds that won’t germinate until they’ve passed through an herbivore’s gut. As an alternative, horticulturists sometimes bathe such seeds in sulfuric acid).

Hansen says that tortoises are ideally suited to perform the ecological roles of extinct species: They are easy to raise in captivity, easy to control, adaptable, and a pose a low risk of spreading disease to native animals. (Reptile diseases tend to be species-specific and unlikely to transfer to other forms of wildlife).

The pattern of lost plant diversity echoes in forests broken up by logging, even where hunting is not a factor. A shift toward wind-dispersed trees has been documented in the East Usambara Mountains of Tanzania, where fragmented forests lose their fruit-eating birds, and thus shelter few new seedlings of fruiting plants. In Mexico’s Zona Maya, spider monkeys relish the fruit of the native sapodilla tree, whose fruit tastes like sugared root beer. A 2010 study by Gabriel Gutierrez-Granados and Rodolfo Dirzo found that the monkeys vanish when forests are fragmented by logging, and no longer spread the seeds of the sapodilla through the forest. As a result, plant diversity in the forest understory plummets.

The results of these shifts are not often obvious, but they can be critically important. A study published in Science in 2008 documented a complex shift in an African savanna ecosystem following the loss of large herbivores. Acacia trees there normally respond to browsing by elephants and giraffes with the growth of fresh branchlets that provide habitat for symbiotic ants. In the absence of the large herbivores, the acacias were invaded by an aggressive species of ant that warred with the trees’ symbionts, resulting in stunted tree growth.

At the Mpala Research Centre in Kenya, Dirzo, an ecologist based at Stanford University, is studying exclosures where megafauna are kept out. In these places, grass grows thick and tall, and rodent populations skyrocket. African mice and chipmunks carry fleas that are vectors for bubonic plague, among a number of other serious illnesses. “Removing elephants and giraffes,” says Dirzo, “can impact human health.”

Dirzo has spent decades studying the fallout as tropical forests are emptied of their native creatures, a process known as defaunation. As native species such as the wild peccary and the tapir decline in many areas of Latin America, surprising substitutes take on the role of seed disperser. In Brazil, the native pacu fish and the agouti, a large native rodent, can effectively transport the seeds of an endangered palm, but both creatures are threatened by intense human harvest. A study in the Pantanal — a vast swath of freshwater wetland covering parts of Brazil, Bolivia, and Paraguay — found that feral pigs dispersed 15 species of native plants, while the tapir, the largest surviving native mammal, dispersed 11. But the feral pig is a frightening beast for any conservationist to ponder — it breeds with astonishing efficiency and often carries disease — and Dirzo is not arguing for its purposeful reintroduction.

Nevertheless, restoring large animals is key to maintaining resilient, diverse ecosystems. In some cases — like Mauritius, where native frugivores are gone forever — this may mean using similar but exotic species, like the Aldabra tortoise. Hansen has even suggested introducing tortoises to Hawaii as a substitute for the moa-nalo, a giant flightless duck with a bizarre tortoise-shaped bill, driven to extinction after Polynesian settlers arrived about 1,000 years ago. Fossil evidence suggests the moa-nalo behaved, and ate, like a tortoise. Using giant tortoises rather than exotic geese to fill the moa-nalo’s empty niche would have the added advantage of eliminating any risk that avian diseases might transfer to endangered native birds, such as the ne-ne goose.

Some conservationists may see such species introductions as a radical departure from conservation tradition, which has in the past focused intensely on rescuing individual threatened species. But evidence emerging from research and restoration efforts scattered around the world suggests that the careful introduction of new animal and bird species may be an important tool for ecologists in the future.

“Now we need to move on to refaunation,” says Dirzo, “and we’ll need to be creative and flexible.”