Despite an outcry from U.S. conservatives that new lighting efficiency standards infringe on personal freedom, legislation mandating greater efficiency became law on January 1. Those new standards, along with major progress in lighting research and development, are helping usher in a technological revolution: Lighting companies — both large and small, in the U.S. and abroad — are rapidly building a better light bulb.

The incandescent bulbs that have lit the world since their invention by Thomas Edison are on their way out, to be replaced by newer technologies offering dramatic improvements in efficiency, energy use, and other environmental impacts.

Indeed, the way Americans think about a light bulb will have to change: Instead of a throw-away item worth merely a few cents, buying a light bulb will more closely resemble the purchase of a long-lived appliance. LED and

‘There are 4 billion screw-in sockets out there and only a quarter of them have an energy-saving bulb,’ says one expert.

CFL bulbs, along with other technologies, can offer one or two decades of use, rather than the paltry year of most traditional incandescent lights.

Lighting companies in the U.S. support the new standards, which, beginning this year, will gradually phase out traditional bulbs like the 100-watt in favor of new technologies that use at least 28 percent less power. These changes bring the U.S. in line with many other countries, including those of the European Union, which began a phase-out of inefficient bulbs three years ago. China’s ban on 100-watt bulbs takes effect this year, followed by efficiency improvements for lower wattages through 2016.

The U.S. changes are long overdue. Efficiency standards for other technologies, such as refrigerators and washing machines, have been around since the Reagan Administration. With lighting accounting for around 15 percent of residential electricity use (and 35 percent in commercial buildings), phasing out the inefficient old bulbs represents a huge economic and environmental opportunity.

“There are about four billion screw-in sockets out there [in the U.S.], and today only a quarter of them have an energy-saving bulb in them,” said Noah Horowitz, a senior scientist with the Natural Resources Defense Council. “When the standards are in full effect, we’ll cut our nation’s electric bill by about $12.5 billion a year and eliminate the need for 30 large power plants and all the pollution that comes from them. It’s a big deal.”

The new U.S. lighting standards are part of the Energy Independence Act of 2007, signed into law by President Bush with broad bipartisan support. The lighting provisions remained uncontroversial until last year, when they became a Tea Party rallying cry. “The American people want less government intrusion into their lives, not more, and that includes staying out of their personal light bulb choices,” said U.S. Rep. Michele Bachmann. 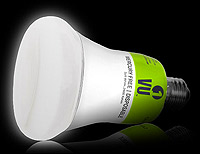 Vu1 Corporation
Electron-stimulated luminescence bulbs, or ESLs, are efficient bulbs with a quality of light similar to incandescents.
Some members of Congress falsely claimed that the legislation would ban all incandescent bulbs and require the purchase of compact fluorescent bulbs (CFLs). In fact, the legislation does not ban any class of bulbs, but rather requires that a 100-watt bulb now use a maximum 72 watts to give off the same 1,600 lumens. In December, Republican members of the U.S. House of Representatives managed to defund enforcement of the new legislation until October of this year, but despite that, the lighting industry is moving ahead with the new standards.

“The legislation is in effect, it has not been repealed, it has not been changed,” said Terry McGowan, the director of engineering for an industry group, the American Lighting Association. “We made all the decisions for this back in 2007. Once you start investing money and changing production lines, that’s very hard to turn off, and also very expensive.”

The new U.S. standards come as lighting companies — ranging from leaders like GE and Philips to smaller companies such as Venture Lighting, GrafTech, and Vu1 Corporation — are developing a host of new technologies. These include a new generation of incandescent bulbs, called halogen incandescents: 72-watt bulbs are available now, for only a few dollars and with light output close to standard 100-watt incandescents, and can screw into existing sockets.

“It’s a bulb that costs only marginally more,” said Brian Howard, co-author of a book on new lighting technologies, Green Lighting. “You get the same

color, temperature, light that we’re used to. So really the only disadvantage is that they don’t last quite as long as fluorescents.” The lifetime of halogen incandescents is about two to three years, compared to six years and more for CFLs.

“I don’t think we would have these new improved incandescents on the market if it wasn’t for the standard,” Horowitz said. “The industry has known how to do this for a long time.”

In the new lighting revolution, the controversial compact fluorescent bulb will almost certainly lose ground to newer technologies. The unfamiliarly shaped CFL bulbs gained infamy due to shortcomings in light color and quality, along with warm-up delays and an irritating hum. But prices have come down and many of the technical problems have been addressed. The efficiency improvement is undeniable: A 100-watt-equivalent bulb that produces 1,600 lumens uses only 23 watts and lasts up to 10 years.

One issue seized on by opponents is the small amounts of mercury inside CFLs. But Horowitz said that CFLs still release far less mercury into the environment than incandescent bulbs. “While incandescents don’t have mercury in them, they cause three times more [mercury] emissions at the power plant than the CFL does,” Horowitz said. “And CFLs are down to two to three milligrams of mercury, which is the size of a pen point, and it stays inside the bulb.” When a CFL burns out, consumers do need to recycle them properly, but Home Depot, Lowes, and others offer such services for free.

Howard and industry experts say that CFLs are likely to be replaced in the coming decade by LEDs, or light-emitting diodes. A solid-state technology, LEDs feature electroluminescence from semi-conductors, rather than

LED lights are completely programmable and will allow for smarter management of home lighting.

thermal radiation coming off an electrical filament as with an incandescent bulb. LEDs provide light nearly equivalent in quality and color to incandescents, while offering both efficiency and lifetime improvements over CFLs. They also are completely programmable and will allow for smarter management of a home’s lighting. Their drawback, for the moment, is sticker shock: Instead of a quarter for an incandescent bulb, a typical LED still costs more than $20.

That is changing fast. Sylvie Casanova, a spokesperson for Philips Lighting, said her company’s standard LED bulb (equivalent in brightness to a 60-watt incandescent bulb, though requiring only 13 watts) was released about a year ago at almost $40, and is already down to $24.99. GE, Sylvania, and others have similar prices for their 60-watt-equivalent LED products. With rebates now available in some states, that can come down to $15.

“Fifteen dollars for a bulb that is going to save you $142 over the life of the bulb, which is 20 to 25 years, and your break-even point is at three years,” Casanova said. “But the consumer doesn’t consider what it is going to cost them to run that light bulb. They just look at the upfront cost.”

Those upfront costs will most likely keep consumers away from some other technologies for the moment, but these may end up playing a role in the market in various ways. Electron-stimulated luminescence bulbs, or ESLs, for example, are efficient bulbs made by the Vu1 Corporation with a quality of light similar to incandescents. They make use of accelerated electrons that stimulate phosphor on the surface of the bulb, which emits light. The company says this results in 70 percent efficiency improvements over incandescents. So far, only a 65-watt-equivalent floodlight bulb is commercially available, but other versions are in the works.

Howard said that plasma lighting is also useful, especially for large commercial or industrial spaces. One company, Stray Light Optical Technologies, produces plasma bulbs with a stunning 23,000-lumen output and a 50,000-hour lifetime. They work by converting electrical power to radio frequency power, which turns a gas inside a tiny bulb to a plasma state that generates light.

Among the technologies that may enhance or reduce the cost of LEDs are organic LEDs, or OLEDs, and quantum dots. The former, already used in television screens and other displays, provides the electroluminescence from a layer of organic compounds that responds to a current flowing through it. Quantum dots, meanwhile, are tiny bits of semi-conducting material that allow for precise tuning of the light’s wavelength. Effectively, that means that a LED bulb could approach even closer the light quality and color of a traditional incandescent bulb.

No more cost-effective way to make major cuts in energy use and greenhouse gas emissions exists than retrofitting buildings. Now, from New York to Mumbai to Melbourne, a push is on to overhaul older buildings to make them more energy efficient.
READ MORE
Casanova, of Philips, as well as the ALA’s McGowan, acknowledged that the industry generally views LED dominance as inevitable. But not everyone thinks that is a foregone conclusion. Horowitz said that each of the main technologies — CFLs, LEDs, and new incandescents — has its advantages, and which one comes out on top is far from guaranteed.

One thing is certain, experts say: Consumer savings will start to pile up quickly. “Many people have 20 to 40 sockets in their home, so it really adds up,” Horowitz said. “The average consumer… once they switch out their bulbs could save 100 to 200 dollars per year.”

Even small steps have big ripples in this field: According to the U.S. Energy Star efficiency program, if every home replaced just one bulb with a more efficient version, the country would save $600 million a year.

Correction, January 26, 2012: An earlier version of this story incorrectly stated the wattage of Philips Lighting’s standard LED bulb. The article should have said that Philips’ standard LED bulb is equivalent in brightness to a 60-watt incandescent bulb, though requiring only 13 watts.