As instability in the Middle East pushes oil prices past $100 per barrel and gasoline prices toward $4 a gallon in the U.S., the need to find better ways to fuel our vehicles has never been more urgent. Some advocates see electric cars as the most promising solution and are urging policymakers to ensure their widespread use through federal subsidies or regulation, such as a requirement that all automakers offer a certain percentage of plug-in vehicles in their fleets. Skeptics argue that electric cars are too expensive, that taxpayer money should not be used to stimulate the purchase of luxury goods, and that market forces alone should determine the future of electric cars.

We believe that the right policy lies between these positions and that there is a clear path to test whether electric vehicles can be viable on a mass scale. The U.S. Department of Energy — in partnership with automakers, car dealers, electric utilities, universities, and local governments — should coordinate a national demonstration program of 500,000 to 1,000,000 electric vehicles in 10 to 20 designated communities from coast to coast. That was the chief recommendation of a recent in-depth study, in which we participated, that was conducted by a group of national experts on electric vehicles. These experts said that by concentrating the many pieces needed to create a viable market for electric vehicles — a variety of cars and trucks for lease and sale, a robust network of charging stations, state and local policies to make home recharging easy — these demonstration projects would give the country a clear sense of whether electric vehicles will play a significant role in the nation’s transportation future. 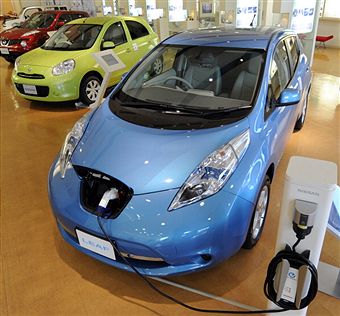 AFP
The Nissan Leaf has generated considerable interest from consumers, but its lithium-ion battery is heavy and expensive.

At first glance, the market outlook for electric vehicles seems bright; when compared on an energy-equivalent basis, electricity prices are 60 to 80 percent lower than gasoline prices. Yet the future of electric vehicles is far from assured. Will the high price of batteries come down sufficiently as economies of scale kick in? Will oil prices fall again as new reserves and drilling technologies are discovered, as has happened with natural gas? Will other technologies — such as hybrid cars or vehicles powered by natural gas, ethanol, or hydrogen — win the competition against electric cars?

Such questions may not be answered in the near future, but a well-planned national demonstration program for electric vehicles can help determine the promise, limitations, and costs of this technology. And once the demonstration is over and the facts gathered and disseminated, electric cars should be forced to compete in a technology-neutral marketplace where other promising alternatives are also considered.

How would a comprehensive EV demonstration program work?

The goal of the projects is to push the number of electric cars and EV infrastructure toward a tipping point.

The most cost-effective demonstration would stimulate sales or leasing of electric cars in a limited number of designated communities that have a range of weather patterns, commuting norms, electric utility systems, and mass transit policies. Nissan and GM currently are concentrating some of their early marketing for electric vehicles in selected states, including California, New Jersey, North Carolina, Tennessee, and Texas. Given the current state of battery technology, demonstration projects should focus on commuter cars and delivery vehicles in urban areas because these vehicles typically make round trips within the range of a single charge.

The goal of the demonstration projects is to increase the number of electric cars and electric vehicle infrastructure in a community toward a tipping point. To reach that point, government and the private sector must take several key steps: municipalities and electric utilities should begin to modernize their practices, such as streamlining the permitting process for setting up home rechargers and implementing time-of-day pricing of electricity so recharging occurs primarily at night; more businesses to supply recharging stations for homes, workplaces, and shopping malls must be launched; and the development of a competent service and repair system for electric vehicles must emerge. Perhaps most importantly, as the infrastructure for electric vehicles grows, initial owners can be better assured that they will be able to re-sell their vehicles in the used-car market.

Without government leadership, no single company has adequate incentive to coordinate all of the stakeholders and agencies to bring a meaningful demonstration to fruition. The creation of 10 to 20 demonstration sites would not involve appropriating new public funds, but rather reallocating and focusing already-authorized government funding. If the demonstration sites are created in the near future, the results of this preliminary leap into the world of electric vehicles should be clear by 2020.

Incentives for electric cars may be spread too thinly, without a focus on a smaller number of communities.

By electric cars, we refer to plug-in vehicles that make use of the electric grid for all or most of their energy. The Nissan Leaf and GM Volt, both now for sale, are generating significant consumer interest, at least among the “early adopter” community. The Leaf uses no gasoline whatsoever but has a range of only 70 to 100 miles before it must be recharged. The Volt, with a small back-up gasoline engine, can travel 375 miles before it must be recharged or refueled, and is sometimes classified as a plug-in hybrid. However, the lithium-ion batteries in both of these vehicles are heavy and expensive. While the real cost of batteries is declining, an electric car today still costs $10,000 to $20,000 more than a similar-sized gasoline car.

Congress, the Obama administration, and regulators in California and Washington, D.C. have already enacted numerous policies to support the production, sale, and use of electric vehicles. These include a generous federal tax credit — up to $7,500 — with some states adding up to $5,000 more in purchase incentives. The federal economic stimulus package is subsidizing recharging stations in various cities around the country, including Chicago and Baltimore. Federal loans and grants are available to manufacturers throughout the supply chain, from makers of lithium-ion cells to selected firms that assemble electric cars. California has mandated that each large vehicle manufacturer offer a small number of “zero-emission” vehicles by 2016, and some states and communities are offering HOV lane access and special parking benefits to users of electric vehicles.

So there is no shortage of political interest in electric cars. But current policies have two key shortcomings. The first is that incentives for electric vehicles may be spread too thinly around the country. The second is that no coordinated plan exists for evaluating the de facto demonstration that is now underway. Key data — who chooses to buy the vehicles, how the vehicles are driven, where they are recharged, and how utilities adjust their billing systems — is not being collected. Without rigorous evaluation, it will be impossible to learn from the successes — and failures — of an electric vehicle rollout.

A technology may die after a successful pilot, before barriers to mass commercialization can be overcome.

As a nation, we do not need to use more taxpayer dollars to persuade technological enthusiasts and green consumers that they should buy an electric car. Tens of thousands of them will purchase a Leaf or Volt, despite the high price and a shortage of public recharging stations. But for sales of electric cars to achieve critical mass in any single community, the sales must expand to fleet buyers and mainstream retail purchasers. In the absence of government incentives, these buyers are unlikely to be convinced that the benefits of electric cars justify changing their driving behavior and paying a high sticker price. So instead of expending more public money in all communities, the existing public commitments need to be concentrated in a few.

But why should taxpayers support a national demonstration of an expensive, emerging technology? Part of the answer is the demonstrated failure of markets to address the persistent problems of oil insecurity and climate change. Yet even if the price of gasoline were raised high enough to account for these concerns, emerging technologies (such as the electric car) would still be disadvantaged compared to mature technologies because of imperfections in the process of innovation in the auto industry. This is in part due to imperfections in patent laws in the auto sector, which allow one manufacturer’s innovation to be easily copied by others, thus discouraging companies to be the first to invest in new technologies like electric drive systems.

In addition, once an innovative technology is invented and pilot-tested on a small number of vehicles, manufacturers and their suppliers face a “valley of death” in the commercialization process. Even a promising technology may die after a successful pilot, before the barriers to mass commercialization can be overcome. Someone needs to spend significant resources to educate the public about electric vehicles, change the permitting practices of municipalities, coordinate with local utilities to ensure uninterrupted electricity supplies, and create an entirely new supply chain — including servicing and disposal — for electric vehicles.

For sure, most automakers will offer a few plug-in vehicles to satisfy California regulators and achieve good publicity. But without some temporary government support — consumer tax credits, loan guarantees for automakers, and research and development funding — to reduce the risks of high-volume production, no manufacturer has adequate incentive to be the innovator who takes the big risk of mass producing electric cars.

A national demonstration program, coupled with community information programs, can reduce the risk to manufacturers and suppliers of making high-volume production commitments. The demonstration will also let the public see how this technology operates in the real world — its benefits, costs, and complications. Once the demonstration is over, all public subsidy of electric vehicles — except for basic R&D into new battery chemistries — should be terminated.

It is too early to tell if electric cars will be a key piece of the technology portfolio that addresses the global problems of energy insecurity and climate change. The technology has potential. Now it is the responsibility of policymakers to nurture and test that potential to give it a fair chance in the marketplace.