Looked at from one angle, climate change is an infrastructure problem. To limit global warming to 2 degrees C and avoid the worst effects of climate change, about $44 trillion will need to be invested in low-carbon projects like wind farms, solar panels, nuclear power, carbon capture, and smart buildings by 2050, the International Energy Agency estimates. That’s more than $1 trillion a year — roughly a four-fold jump from current investment levels. 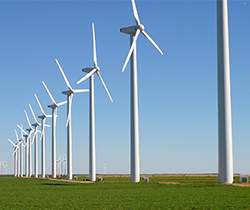 Where’s the money going to come from? Maybe from green bonds, say bankers and environmentalists alike. Green bonds, which are also known as climate bonds, are fixed-income investments that are designed to finance environmentally friendly projects. Pioneered by international development banks — the European Investment Bank issued the first climate bond in 2007, followed a year later by the World Bank — they are today issued by state and local governments (Massachusetts, Hawaii, New York, and the cities of Stockholm and Spokane, Washington, among others) and by big companies (Bank of America, Unilever, and the French utility GDF Suez).

Uses of the bond proceeds are varied. The World Bank sold green bonds to raise funds for geothermal energy in Indonesia and free compact fluorescent bulbs for the poor in Mexico. Massachusetts raised money to clean up a superfund site. Energy company EDF’s green bond financed wind farms in France, and Toyota used the proceeds from a green bond to make loans to American consumers who buy hybrid cars.

By all accounts, the market for green bonds is booming. About $11 billion worth were issued in 2013. So far this year, $34 billion have been issued, according to the Climate Bonds Initiative (CBI), a London-based nonprofit that tracks the market. Some experts predict that $100 billion of green bonds will be sold in 2015. “In markets, momentum is everything,” says Sean Kidney, the chief executive of the Climate Bonds Initiative.

Institutional investors concerned about the environmental impact of their portfolios are snapping up green bonds.

Demand is coming from institutional investors — particularly those with a mandate to consider the environmental or social impact of their portfolios — and they are snapping up green bonds faster than issuers can churn them out. “It’s much easier to sell them than it is to buy them,” says Stephen Liberatore, the lead portfolio manager for socially responsible fixed-income investments at TIAA-CREF, a buyer of green bonds. Rachel Kyte, a World Bank vice president and green bonds enthusiast, says “green bonds have opened a new finance flow that will be essential to confronting climate change.” The World Bank has issued more than $7 billion in green bonds in 17 currencies since 2008.

But green bonds may not be all they’re cracked up to be, for a couple of reasons. First, there’s no consensus over what makes a bond green. Are railroad investments green? What if the trains carry coal? What about nuclear power plants? Or biofuels? Second, and perhaps more important, it’s very hard to know whether green bonds are financing projects that would have happened without them. If green bonds don’t attract new investment to low-carbon projects, they will turn out to be little more than a feel-good exercise.

Cary Krosinsky, who has written three books on sustainable investing and teaches a Yale University seminar on business and the environment, says some companies may apply a green label to bonds they were planning to issue anyway. “There are champions in the corporate, financial, and investor world who want to be part of a climate solution. But there are others for whom this is PR. There’s a danger that these could be used in a cynical way.”

But while a highway is a highway, defining “green” is tricky. In fact, a highway could conceivably be deemed green “if we get cars moving that are currently in gridlock,” says the CBI’s Sean Kidney. His nonprofit organization, working with scientists and economists, has begun one of a series of efforts to bring clarity to the sector. CBI has released standards for renewable energy and buildings; the group is working on transportation, biofuels, and land use, but not nuclear power. “It’s unlikely we’re going to look at nuclear for the foreseeable future,” Kidney says, citing opposition from environmentalists. Other gray areas include retrofits of coal plants to reduce emissions and energy-efficient improvements in oil and gas exploration.

In the future, issuers may be encouraged to report on the environmental impact of projects they finance.

In January 2014, a group of investment banks unveiled what it calls the Green Bond Principles, which it says will “encourage transparency, disclosure, and integrity.” The voluntary guidelines identify broad categories of eligible projects, such as renewable energy and efficient buildings, but they don’t seek to arbitrate disagreements about whether, say, corn ethanol delivers environmental benefits.

Marilyn Ceci, a managing director at JPMorgan Chase who worked on the principles along with executives from Bank of America Merrill Lynch, Citi, and Crédit Agricole, said the principles are designed to encourage transparency and disclosure. Scientists and NGOs can’t agree on what’s green, she noted, and so it’s not surprising that bankers decided not to try to do so. Definitions will be left to issuers, and “then it’s up to the market to determine how green an issuer’s green bond is,” Ceci said.

In the future, issuers may be encouraged to report on the environmental impact of projects they finance. Manuel Lewin, head of responsible investment for the Zurich Insurance Group, which has pledged to invest $2 billion in green bonds, says such reports could be useful to buyers: “How many megawatts of renewable energy are being generated? How does that translate into CO2 emissions? How many hectares of land are being reforested?”

A group called the International Capital Market Association has convened issuers, buyers, and underwriters of green bonds to update and refine the principles. “It’s important to know that an investment is undeniably and categorically an environmental positive, whether by reducing greenhouse gases or improving the quality of a waterway,” says Cheryl Smith, a managing partner who leads fixed-income investments at Trillium Asset Management, which buys green bonds.

What’s harder to know is the extent to which green bonds are enabling new projects — a concept known, inelegantly, as “additionality.” This fall, MIT refinanced a series of bonds that were originally used to construct energy efficient buildings on its campus, and it designated $370 million of the new bond as green. This is standard practice — refinancing is a core function of bond markets, and it frees up money for other purposes — but it doesn’t deliver new environmental benefits.

Proponents of green bonds say that all the buzz they are generating is, by itself, valuable because it raises awareness of green investments. Governments and businesses are making new connections with environmentally oriented investors, they say. If investors in the fixed-income market, where an estimated $80 billion to $100 billion of bonds are sold every year, shift even a fraction of their purchases to green bonds, they will provide new and much-needed financing for low-carbon infrastructure. If money continues to flow into green bonds, their yields — that is, the interest they pay, which is currently the same as ordinary bonds — could drop, which would make green projects cheaper to build.

“What we are trying to do is use your investor dollars to lower the cost of capital for alternative energy,” says TIAA-CREF’s Liberatore, who oversees the firm’s Social Choice Bond Fund (TSBRX), which is open to retail investors. “That is how we are going to be able to make change over time.”

Mindy Lubber, the president of Ceres, a sustainability advocacy group, notes that the market is just now taking shape. “Everyone wants to get it right,” she says, “and so far it is going well.” Green, after all, is a color that Wall Street should understand.