Pity the California newt, Taricha torosa. The bulk of the population of this poisonous amphibian, brown-backed and golden-bellied, lives a relatively carefree life in Calfornia’s coastal range: foraging for insects with their sticky tongues and, in winter, migrating to still water to breed, where they sometimes gather into great, amorous balls around one female. But the climate is changing, and the coastal range is predicted to become hotter, and potentially drier. The California newts may not be able to live out their cool, moist lives under such conditions.

But there is hope for the newt. Just 60 miles east lie the Sierra Nevada— higher, colder, and probably wetter mountains, even in 2100. But will the amphibians be able to get there on their own?

Scientists in the past decade have produced a ream of fascinating studies suggesting where certain species might be able to live in the future.

Species may not be able to move to suitable habitats, even if there are protected pathways.

Generally, they take the “climate envelope” approach: List the conditions under which a species now lives, assume those conditions are necessary for its survival, then map where those conditions will occur in 2050, 2100, or some other future date. But these studies have seldom looked at how the world’s bugs, bears, birds, and other biota are supposed to trek from A to B.

A new study takes on this challenge, examining the California newt and 14 other species. Reagan Early of the Universidade de Ã‰vora in Portugal and Dov Sax of Brown University in the U.S. have mapped the route that the newt must travel, and the pace that it must keep, to get to the Sierras. What makes it dicey is that the newts must cross California’s Central Valley, a hot, low landscape covered from end to end with agricultural fields.

Leaving aside for the moment the question of what the newts might find to eat in the pesticide-dosed fields of the Central Valley, where they will mate, or how they will ever get the idea to migrate to the Sierras in the first place, a key question remains: Will the newts be able to physically make the trip?

Early and Sax studied the potential journey by plugging the newts’ climate preferences into a model of the region’s climate as it is predicted to change, decade by decade. They discovered that the answer, like so many scientific answers, is “it depends.” The newt might just make it, says Early, “if it moves forward when it gets warmer, and it doesn’t move backwards when it gets cooler, and moves 24 kilometers a decade.”

In the past, the climate changed too quickly for some small, slow creatures, and they went extinct.

That’s a lot of “ifs,” underscoring what Early says is her and Sax’s key insight into the challenges of climate-driven migrations: Because of topography and the jerky nature of climate change, species may not be able to move to suitable habitats, even if there is plenty of space and protected pathways. “We’ve had this idea that if we just make these nice green corridors, species will just move happily along them,” she says. But that isn’t necessarily the case.

Not moving backwards is crucial. Climate change is not expected to be a smooth, linear increase in temperatures, with each year just a smidge hotter than the last. It is predicted to be bumpy and chaotic, with extremely warm periods followed by years of cooler weather before the thermostat goes up again. The newt, and many of the other amphibians the two researchers modeled, needs to have the ability to hang tough for up to a decade of substandard climate in order to keep moving toward places that will ultimately suit it best. And no one knows how tough these creatures actually are; they’ve never been tested with anything like anthropogenic global warming.

They have, however, dealt with past periods of climate change. Roughly 21,000 years ago the Earth was a lot colder. Ice sheets covered a good chunk of the Northern Hemisphere. Sea levels were noticeably lower. Wooly mammoths and other Ice Age beasts roamed. Since this time, called the Last Glacial Maximum, things have warmed up considerably — but some places warmed much more quickly than others. In some regions, like the Andes Mountains in South America, the mean annual temperature hasn’t changed as much as in other places, and the steep terrain means that any species that gets a little hot only has to creep a short distance to gain altitude and find relief. 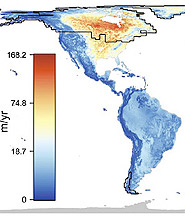 Science
The velocity of climate change from the Last Glacial Maximum

So what happened to creatures like the newt during previous eras of glaciation and deglaciation? A group of ecologists, led by Brody Sandel of Aarhus University in Denmark, set out to find the answer, mapping the velocity of climate change from the Last Glacial Maximum. Areas where species really had to motor to stay abreast of their ideal mean annual temperature show up as dark red, while areas of relative calm, like the Andes, appear cool blue. Two warm splotches dominate the image: a big red blob over northeastern North America, and a large orange swath over northern Europe. Tellingly, those are the very places that have the fewest amphibians, birds, and mammals with small ranges. The implication is that that there were some small, slow creatures that lived in home ranges of less than 250,000 square kilometers in these areas thousands of years ago, but the climate changed too quickly and they went extinct. Amphibians felt the impact most acutely. Almost 40 percent of the variation in how many small-range amphibians exist from place-to-place can be explained just by looking at climate change velocity since those ice sheets began to retreat.

It is a sobering thought, because anthropogenic climate change is occurring much faster than the gradual changes that took place over the last 21,000 years. Indeed, Sandel says the rate of warming over the next 70 years could easily be 10 times as fast as the warming that occurred as the planet emerged from the last Ice Age.

Early says that before she completed her research, she believed that physically moving species to help them reach suitable habitat — a strategy called “managed relocation” or “assisted migration” — was a bad idea. But the maps she made, with those yawning gaps between the amphibians and the places where they could live happily in the future, changed her mind.

She still sympathizes with those who have reservations. “I think people feel it is playing God,” says Early. “We want nature to be a pristine thing, and managed relocation really seems like interfering with things.” But we need to think seriously about getting our hands dirty and interfering, she has decided, “in the next two decades.”

Will scientists’ reservations prevent action from being taken on moving species like the California newt? It is impossible to know, since it is unclear how widespread these reservations are. Many scientists find the idea of moving species abhorrent to their notions of letting nature take its course. They also fear moving a species to save it, lest they accidently create a destructive invasive species — a concern often vocalized by University of Tennessee, Knoxville biologist Daniel Simberloff.

Efforts are now underway to assess the opinions of experts on assisted migration. One study — conducted by Mark Neff, an ecologist at Allegheny College in Pennsylvania — suggests that Simberloff’s concerns were “strongly echoed by a sizable group within my sample,” Neff said. Notre Dame researchers also are conducting research to quantify what percentage of ecologists support or reject assisted migration.

Of course, scientists aren’t the only ones who could catch a bunch of newts and drive them across the Central Valley. “There will be small pockets of people who just adore these little creatures and I wouldn’t be surprised if they went and boxed them up,” says Early.

In the southeastern United States, a group of citizen naturalists, the Torreya Guardians, has begun transplanting an endangered yew tree, Torreya taxifolia, from its native habitat in northern Florida and southern Georgia further north in the Appalachian Mountains. The group’s Web site says the Guardians have four main goals: to save Torreya taxifolia from extinction, to use private seed stock and private lands to “test the efficacy of assisted migration,” to serve as a model “for the kinds of geographic interventions that will be necessary for plants in a warming world,” and to foster collaboration between citizens and professional botanists.

For Sandel, the main objection to managed relocation isn’t that it is risky, but that it is impossible to do for all the thousands of species that might be threatened by climate change. His study included data on 21,000 vertebrate species with small ranges. “And then there’s the plants, fungi, invertebrates and bacteria,” he says. “It gets really messy.” Sandel says that moving a few hundred species, at most, is thus “treating the symptoms” of anthropogenic climate change. “Ultimately, what we have to do,” he says, “is limit carbon dioxide emissions.”