Thirty-five years ago, a landmark plenum of China’s Communist Party famously initiated the structural reforms that boosted the country’s economy into export-led overdrive, transformed China into a world power, and spawned a daunting array of environmental challenges. 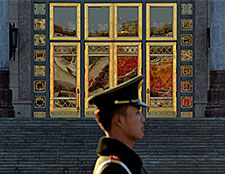 Now, as another key plenum ended this week in Beijing, China’s new President, Xi Jinping, and Prime Minister Li Keqiang find their country at a critical crossroads. The economy has slowed, and China is confronting the cumulative consequences of its three-decade focus on economic expansion with little attention paid to mounting ecological and social costs.

The just-completed Third Plenum of the Central Committee of the Communist Party — the strategy session that accompanies China’s once-a-decade leadership transition — may one day be seen as a turning point that marked China’s shift away from unbridled economic growth toward a more balanced and sustainable form of development. But given the traditionally broad pronouncements favored by the party in its concluding report, it will take a while before the impact of China’s reforms emerges and it becomes clear whether these reforms will do anything significant to tackle the country’s severe environmental problems — from foul air, to badly polluted water supplies, to tainted food.

One thing is certain: China’s leadership is now feeling intensifying public pressure to do something about the environment. A growing number of China’s 1.35 billion people — especially those in the rapidly expanding middle class — are fed up with government inaction on environmental issues. Last January, citizen outrage over Beijing’s hazardous air quality forced the central government to act, and since then it has taken steps to shutter coal plants in major cities and reduce the number of new cars allowed to be registered in Beijing and other metropolitan areas.

Urban residents are left to wonder whether more ‘airpocalypses’ will define China in the 21st century.

This summer, the Ministry of Environmental Protection released results of air quality studies from 74 cities showing that these urban areas had harmful levels of pollution. Several weeks ago the city of Harbin, population 11 million, was literally shut down as dense pollution reduced visibility to a few meters. Transportation halted, schools closed, and residents of China’s mega-cities were left to wonder whether more of these “airpocalypses” would define China in the 21st century.

The Third Party Plenum report highlights the main areas where reforms, “unprecedented in both scale and degree,” are necessary. But specifics are lacking and one must parse the party’s opaque prose for clues as to what is really being offered in the environmental sphere. The summary acknowledges general support for “ecological civilization” and party leaders have made it clear that they intend to rein in heavily polluting industries and coal-fired power plants. The party vowed to take strong steps to halt the rapid loss of arable land to urbanization, promising enhanced legal protection for farmers.

Many of these reforms have been mentioned before, however, and it remains to be seen if they are enacted. Nevertheless, two things are certain: Unlike 1978, when all that mattered was the economy, today economic, ecological, and social reforms jostle for attention. And the plenum summary makes it very clear that Xi and Li expect major results by 2020. The question is, can the leadership set a multifaceted agenda that balances economic growth with the need to heal the country’s battered environment?

Can the leadership balance economic growth with the need to heal the country’s battered environment?

China’s environmental problems will certainly not disappear soon. Although the country has spent more money than any nation on land and water restoration, only about 11 percent of China’s forests have healthy ecological functioning. The Chinese Academy of Sciences reports that 43 percent of surface water is too polluted to use, and 57 percent of urban groundwater — the primary source of drinking water for hundreds of millions of people — is also polluted, according to a 2013 Ministry of Environmental Protection study. Soil pollution is so extensive that the government considers data about it to be a state secret.

Food self-sufficiency, a cultural tradition in China, no longer holds as demand swamps supply; the country will import record amounts of grain in 2013-2014. Total energy demand in China continues to skyrocket. Coal — the source of much of the country’s air pollution — remains critical; over the next two decades, use is projected to rise by 70 percent from current levels.

All these issues are linked to China’s ongoing urban transformation. In the next 17 years, an estimated 300 to 400 million people are projected to move from rural areas into cities. But there are no functional national-level regulations to guide the largest urban expansion in world history. China’s mushrooming cities provide the clearest example of how ecological and social systems are connected.

Any one of these stressors would challenge the most nimble government. The fact that China’s food, energy, water, and urbanization debts are coming due simultaneously creates huge challenges for the country’s new leadership. There is, however, a path forward, and Xi and Li have already taken the first steps down it by making strong statements in support of environmental and social reforms. Like the U.S., China’s political system thrives not on revolution but on incremental change. The Third Plenum summary is an example of the leadership sending signals about what reforms it expects from ministries and local governments. In China, however, there is often a gap between what central leaders want and what local governments deliver. Now that the plenum is over, the leadership must push for more specific mandates and create incentives for their implementation.

The Communist Party is not going to suddenly ditch decades of faith in GDP growth. Economic reform will still be priority number one. What to watch for will be how new economic policies are aligned with social and environmental reforms. For example, Xi and Li have already decided to increase funding to fight ecosystem degradation. What is also needed is a commitment to employ science to monitor the results of these efforts. Stronger implementation of China’s environmental protection statutes is also essential, and the recent rise in public interest pollution litigation is promising. In addition, the government must replace quantity-oriented environmental campaign targets with those emphasizing healthy ecosystems.

The Third Plenum promises a “unified” land market to address the huge losses of farmland to urbanization through unbridled real estate development. With about half of municipalities’ current revenue dependent on land sales that often involve large-scale corruption and little compensation for local farmers, economic reform of land transfers will occur. While details are lacking, reforms should feature new property taxes and municipal bonds that will provide increased fiscal support to local governments to help wean them off profits gained from paving over arable land.

Solving China’s problems ‘requires an approach that integrates ecological and social planning,’ according to one expert.

So far in China, the government has never allowed market pricing of energy and water. But as part of the Third Plenum’s market efficiency directive, look for changes in energy pricing policy to come soon. What is needed? Tying price reform to new rules that promulgate incentives for government officials who meet energy and water delivery efficiency targets and strengthen implementation of already existing green urban building codes. China must also embrace a paradigm shift in water policy from a focus on engineering solutions, such as massive canal and dam projects, to an ecosystem-based approach that encourages coordination between government institutions.

Few would deny that China over the last decade has made great strides in addressing environmental and social problems. But shot through all this history is the troubling reality that China’s closed command-and-control decision making system lacks most of the characteristics that experts identify as key to making progress on reforms that must go far beyond mere economic adjustments: open information exchange, government transparency, institutional coordination, and public and private sector participation. As Xu Jianchu, director of the East Asia office of the World Agroforestry Center, makes clear, “Solving China’s 21st century problems requires an approach that integrates ecological and social planning.” To date, China has largely failed to do this.

China has already proven that it can build a powerhouse economy and pull hundreds of millions of people out of poverty. Now comes another huge challenge — constructing an adaptive state under 21st century conditions of dwindling resources, greater social inequality, and climate uncertainty. The tasks are daunting: China must reboot its economy, revamp environmental policies to reverse decades of decline, and rekindle its social contract to citizens in the face of unprecedented urbanization.

There may be too much on China’s plate for the new leadership to make immediate progress, but given the history of Communist Party successes the question is not whether change will occur soon but whether it will occur soon enough. Even before the Third Plenum, Xi and Li had given the Chinese people something more important than plenum pronouncements: With their invocation earlier this year of the “Chinese Dream,” they have created great expectations that the party will finally solve pollution problems, control corruption, and inject more equality into society. It is now time for the leadership to set about accomplishing these tasks.