If all had gone as planned, “the world’s first eco-city,” as press releases billed it back in 2005, would now be well on its way to completion. The visionary project called for a grassy island near the crowded metropolis of Shanghai to be transformed from a marshy backwater into a gleaming community of energy-efficient buildings housing 50,000 people. Waste was to have been recycled as fuel and the waterfronts were to be lined with sleek micro-windmills. The original timetable called for the first phase of construction to be completed by the Shanghai Expo in 2010, enabling the city to showcase its commitment to building a green future. Within 30 years, the planned community, Dongtan, would grow to accommodate half a million people.

An artist’s rendering of Dongtan, near Shanghai. ARUP

Today, almost nothing has been built. Some residents have been moved off the island, many of them becoming cab drivers in bustling Shanghai. Although the project was widely publicized internationally, most locals knew little about it. The political leaders who championed the project were ousted in a corruption scandal, and their successors have allowed construction permits to lapse.

Meanwhile local environmentalists and academics have recently spoken out against the project in the Chinese press, noting that the planned construction site happened to be located on the last extant wetlands outside Shanghai, home to rare migratory birds. A farmer with fields near the project site told a reporter in 2007 that he hadn’t been informed, let alone consulted, about intentions to transform the area. What you will see if you visit the site today, according to Paul French, a Shanghai-based partner in research publisher Access Asia, is that “no construction has occurred there — indeed it’s gone backwards as a visitor center previously built is now shut.” 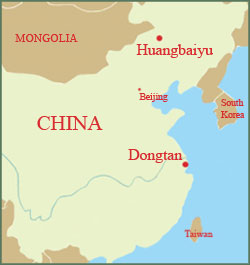 Highly touted eco-cities in Dongtan and Huangbaiyu have run into trouble.YALE ENVIRONMENT 360

Dongtan and other highly touted eco-cities across China were meant to be models of sustainable design for the future. Instead they’ve become models of bold visions that mostly stayed on the drawing boards — or collapsed from shoddy implementation. More often than not, these vaunted eco-cities have been designed by big-name foreign architectural and engineering firms who plunged into the projects with little understanding of Chinese politics, culture, and economics — and with little feel for the needs of local residents whom the utopian communities were designed to serve.

“What I have always found amazing about these eco-towns is how seemingly easy it is for people to, first, tout these as a sign of China’s commitment to the environment and then, second, be surprised when things fail,” writes Richard Brubaker, founder and managing director of China Strategic Development Partners.

Shannon May, a Ph.D. candidate in anthropology at the University of California, Berkeley who has studied the troubled eco-city of Huangbaiyu, wrote in comments posted on The Christian Science Monitor’s Web site, “While such highly lauded projects garner fame and money for the foreign firms, and promotions for the local government officials, they leave the population they were supposed to serve behind.”

The Huangbaiyu project sought to transform a small village in northeast China’s Liaoning province into a more energy-efficient community. Part of the vision was to use special hay and pressed-earth bricks for construction. Unfortunately, of the first 42 homes completed in 2006, only a handful were built with the custom bricks. As the magazine Ethical Corporation has reported, cost overruns made the homes unaffordable to many villagers. In other instances, although homes were available, the farmers refused to live in them, complaining that the new yards weren’t large enough to raise animals and sustain a livelihood.

Some of the homes in Huangbaiyu were built with garages, although villagers don’t have cars.

Among the problems besetting the project were “technical inexperience, faulty materials, lack of oversight, and poor communication,” says May, who has studied the site. Oddly, some of the homes were built with garages, although villagers don’t have cars.

While disappointing, these results shouldn’t be surprising. In China, hype comes easy, as foreigners dearly want to believe that anything is possible in this booming country. Initial expectations often aren’t well grounded, and people make easy pronouncements with little familiarity of how things work in China.

In the cases of Dongtan and Huangbaiyu, the stumbling blocks encountered were not inevitable, and lessons for the future can be gleaned in examining the projects’ fate.

Some of the problems are common to high-profile, visionary projects across China. Richard “Tad” Ferris, a Washington, D.C., lawyer for the firm Holland & Knight, explains that there exists in China, especially in Chinese law, an “aspirational culture” rather than a “compliance culture” — meaning that implementation and oversight of regulations and plans frequently fall short of reality. Anyone who has ever walked down the streets of Beijing, where sidewalks slabs with raised bumps for blind pedestrians suddenly veer into open manhole covers, knows that paths paved with progressive intentions can be strewn with peril.

But there’s another side of the story. The most highly publicized eco-cities, including Dongtan and Huangbaiyu, drew upon expertise from some of the most vaunted international architectural and design firms. The vision for an eco-city on the outskirts of Shanghai was first hatched by the international consulting firm McKinsey & Company. The well-regarded UK-based design, engineering, planning, and business consulting firm, Arup, designed what its Web site describes as the “master plan” for Dongtan. In 2005, British Prime Minister Tony Blair even hailed collaboration on Dongtan as a sign of strong U.K.-China relations.

And William McDonough — a U.S. architect, author of Cradle to Cradle, and a celebrated figure in the American green architecture movement — worked on the design of Huangbaiyu, as well as “conceptual plans” for other eco-projects across China.

As Wen Bo, a Beijing-based environmentalist and co-director of Pacific Environment’s China programs, observes: “I know that some very experienced international firms, including a U.K.-based construction company and the American architecture firm of William McDonough, were involved in planning; it seems to me that they should share some of the responsibility for any problems encountered.”

China has become a laboratory for new technology and global talent seeking to realize their futuristic visions.

Like it or not, China has become a workshop for the world, a laboratory for new technology and global talent seeking to realize their futuristic visions. Foreign architects have designed many of Beijing’s most famous architectural landmarks, including the Olympic “Bird’s Nest,” “Aquacube,” and CCTV towers. This international spotlight helps explain both the high hopes — and, in this case, great disappointment — connected with these eco-cities. As Wen tellingly notes, these particular projects were always much better known outside China than inside.

The sentiments voiced by McDonough several years ago typified the grand aspirations of the eco-city planners. In a slideshow presentation now available on YouTube, he said, “I will finish by showing you a new city we’re designing for the Chinese government. We’re doing 12 cities for China right now, based on Cradle to Cradle, as templates. Our assignment is to develop protocols for the housing of 400 million people in 12 years.”

Today, with increasingly critical coverage of eco-cities in the press, McDonough’s architecture and community design firm, William McDonough + Partners, is downplaying its involvement in China. According to Kira Gould, the firm’s director of communications, “While we have in the past done some very limited conceptual planning work in China, we are not doing any community design/planning work there at this time.”

Even after problems came to light, Arup continued to promote its involvement in the Dongtan eco-city, although the language of recent press releases and public statements is carefully worded to leave unclear whether the project has been built. A spokesperson from Arup was not available for comment.

So why did these plans not come to fruition?

In the case of Dongtan, as Paul French explains in a podcast posted on the Ethical Corporation web site, one problem was a feud over who would actually fund the project. “Both sides — Arup, on one side, who call themselves the ‘master builders’ of the project — and Shanghai Industrial Investment Corporation (the Chinese government arm that owns the land) —thought the other was going to pay for it. So Arup thought they were brought in on a project that they would then be able to design, the Chinese would build it, and pay them a large amount of money. The Chinese thought that Arup was going to build the project and that they would get themselves a free eco-city.”

A second stumbling block has been the highly politicized nature of the project. When former Shanghai Communist Party chief Chen Liangyu, a well-known backer of the project, was sentenced in 2008 to 18 years in prison for bribery and abuse of power, the process stalled. According to Peggy Liu, chairperson of the Joint U.S.-China Cooperation on Clean Energy, “Dongtan got stuck mainly due to the transition of Shanghai mayors.”

In the case of Huangbaiyu, a lack of understanding of local needs presented problems. So, too, did a lack of sound oversight: no one effectively ensured that plans on paper were consistently translated into projects on the ground. The small plots and mix-up with the eco-bricks are telling examples of the confusion in construction.

Lately, there is more enthusiasm in China for better green building codes than for designing new cities.

In order for a green community to succeed, it not only has to limit carbon emissions but actually be livable — and adapted to local circumstances. Without extensive consultation with local people, it’s a challenge for foreign planners, even with the best of intentions, to understand what is required to transplant a farmer who grew up plowing fields into a city dweller. (One of McDonough’s blueprints, for another planned eco-city in Liuzhou, called for farmers to use rooftop fields, connected by tiny bridges. Whether or not it’s a workable ecological solution, one wonders how well recent transplants from the countryside would tolerate vertiginous crisscrossing between buildings.) This is one reason Brubaker stresses the need for more community consultation and a “locally guided process.”

Other, less-publicized approaches to building eco-cities are now underway in China that so far seem to be making more progress. A partnership between the Singapore government and the local government to build an eco-city near Tianjin looks more promising, in part because money is coming from both sources and the project is expected to earn not only global kudos but money, making a greater level of supervision and follow-through more likely.

On the whole, within China, there has lately been more enthusiasm for expanding green building codes than building new cities from scratch. “Enforceable green building codes, with the designers’ and planners’ willingness to follow them, is very important,” says Wen Bo. “Such grand eco-city plans themselves are not eco-friendly.”