Once again, the world is on a sprint toward a new agreement on global climate change. The last time this happened — in 2009 — the sprint ended in acrimony in Copenhagen. This time, the signs are more auspicious. As someone who has been writing for nearly 25 years about the difficulties of making serious progress on climate change, I am more optimistic today than I have been in a very long time. When governments gather in Paris late this year, I believe they are likely to adopt a watershed strategy for slowing climate change. 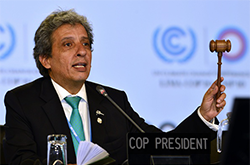 A shift in strategy was evident at climate talks in Lima in December, where Peru’s Manuel Pulgar served as conference president. CRIS BOURONCLE/AFP/GETTY IMAGES

I’m optimistic for two reasons. First, the logic of Paris is new. In the past, governments have tried to negotiate single, massive, and integrated treaties that all nations would supposedly sign and honor. That was the logic of the 1997 Kyoto treaty — a logic that continued in Copenhagen when governments tried to finalize an agreement that would replace Kyoto. But what they found was that single integrated undertakings are just too difficult to craft. There are so many different countries, with different interests and capabilities, that efficiently finding a single common agreement is all but impossible.

Worse, making that agreement legally binding was scaring some countries. For the U.S., a binding treaty would require Senate ratification — an impossible hurdle to clear. And for most of the emerging economies that account for all the growth in world emissions, a binding treaty was daunting because those nations did not know exactly what they could reliably commit and honor.

What’s new is a more flexible approach — in effect, an umbrella under which lots of countries can make different commitments. For some countries those commitments will be binding — something that is important to the European Union, for example — while for many others the effort will take on a more voluntary character. This new approach relies heavily on national pledges for action — a so-called “bottom-up” strategy to contrast with the “top-down” treaty-drafting efforts of the past two decades.

In addition, many other groups are making pledges — for example, various groups of cities have banded together to implement climate policies on their own, regardless of whether their national governments do the same. Even groups of firms are playing a role — such as an alliance of palm oil producers in Indonesia that have pledged to stop deforestation.

Evidence of this shift is abundant on the road to Paris. Last September, at a summit hosted by the UN Secretary General in New York, governments along with firms and other key players began making pledges to cut emissions. A few months later, at a meeting of the parties to the United Nations Framework Convention (UNFCCC) in Lima, governments focused on how to make those pledges more concrete. They also made another push to mobilize the financial transfers that will be essential to help the least developed countries and the mechanisms of peer review that will be needed to monitor national pledges and see if they add up to an appropriate global effort.

This shift to a new system — what some scholars call a “regime complex” or a “polycentric” system of governance — is a reflection of reality. Unlike the 1990s, when one country dominated the global system, power is rapidly diffusing in the international system. In climate change, power is measured not so much by armies but by the willingness to invest resources and by the sheer size of emissions. Most of today’s climate powers are wary of overly legalistic commitments — notably China, the U.S., India, Indonesia, and Brazil. Only one climate powerhouse, the European Union, is keen for strictly binding treaties — but Europe accounts for just 10 percent of world emissions and its share is shrinking. When power is diffuse, then legal commitments must reflect the reality that different power centers will favor different strategies.

The new reality reflects the fact that most countries won’t be ambitious when they work in huge groups.

This new decentralized, bottom-up reality also reflects the fact that most countries won’t be ambitious when they work in huge groups. Big negotiating forums are plagued by complexity. Real deal-making requires working in smaller groups — what used to be called “coalitions of the willing” until that term was tarnished by the pseudo-alliance that invaded Iraq, but today might just be called “climate clubs.” Good examples include the club that Norway has led to finance radical improvements in the policies of countries that account for much of the world’s deforestation. Also notable is the club of countries that are focused on cutting soot, methane and other so-called short-lived climate pollutants (SLCPs). In Paris, I expect that diplomats won’t try to shoehorn all these disparate commitments into a single legal undertaking. Instead, the Paris umbrella will recognize them all while providing additional support (e.g., the financing) where needed.

A second reason for optimism is that this flexible, bottom-up and club-oriented strategy is already doing a much better job of engaging the most pivotal players: the large, emerging countries. A good model for what is possible is the U.S.-China agreement on climate change announced in November. That agreement, in part, recognized the emission control efforts that each country was making already. But it also pushed the U.S. and China to do more — for example, collaboration on development of new technologies — and helped lock their progress into place. It was also a reminder that for most countries, real climate policy will mainly emerge by focusing on areas where the goal of slowing warming intersects with other goals that are a higher priority, such as cutting local air pollution.

China is making heroic efforts to control its emissions — so heroic that total emissions from China, which used to grow rapidly, will now likely peak in the next decade. China is mainly acting because its cities are polluted and the nation’s policy makers know that cleaner fuels and more efficient energy systems are essential for local productivity and happiness. Most countries, frankly, don’t yet care enough about abstract, global dangers of climate warming to invest much; but when that global problem is married to more urgent national priorities, their willingness to act rises sharply.

While I see a lot of good news in this shift, there are many dangers as well. One is that governments will be so focused on making pledges that they won’t invest in creating the infrastructure needed to assess which pledges actually work. Indeed, that was one of the areas where the Lima talks were most inconclusive and where it will be easy for the Paris diplomats to punt. Bottom-up, decentralized diplomacy can only work for the long haul if there is a mechanism for spotlighting the experiments that work (and highlighting those that are bogus failures) and helping the best examples scale up. The right mechanism can’t be built by the Paris conference, but an effective process after Paris for building and testing a serious peer review scheme is essential.

Governments must demonstrate the new reality is not just an excuse for each country to do whatever it wants.

It is crucial that governments demonstrate that this new bottom-up reality actually delivers — rather than just being an excuse for each country to do whatever it wants, regardless of the global consequences. I put that challenge to French foreign minister Laurent Fabius in Davos last month and his answer was underwhelming. He simply assumed that if countries discover that their collective efforts don’t add up to stopping global warming at no more than 2 degrees — a widely accepted goal — that they will agree to do more. That faith ignores the reality that 2 degrees is now impossible to honor and that serious diplomacy must get countries to brace for much higher levels of climate change and must find ways to get countries to do more to control emissions.

As the key stakeholders come to accept this new reality — that diplomacy must be multi-speed, flexible, and bottom-up — it is possible that a lot of good will and new efforts will emerge. Sure, this won’t deliver a 2-degree limit. But it will turn the corner after decades of talking but not acting. If 2015 marks the year that countries actually turn the corner then we should declare Paris a success.

The international community should stop chasing the chimera of a binding treaty to limit CO2 emissions, argue former U.S. senators Timothy Wirth and Thomas Daschle. Instead, they say, it should pursue an approach that encourages countries to engage in a “race to the top” in low-carbon energy solutions.READ MORE

It is interesting to see that this shift in diplomatic style isn’t just happening in climate. In many other areas — financial regulation, investment, and trade — global governance is taking a similar turn. In trade, for example, the long-standing Doha round of trade talks is on life support after more than a decade of efforts aimed at creating a single, top-down integrated agreement. Much more progress is found, however, with decentralized agreements — such as regional trade agreements. And serious diplomatic efforts are now focused on ways that the World Trade Organization (WTO), itself, could foster multispeed “plurilateral” agreements. What happens on that front should be watched closely because climate diplomacy is a lot like trade. It involves national competitiveness and difficult deal-making, and there is no institution better at doing that globally than the WTO.

Back in the late 1980s when diplomats were looking for models that could guide their diplomacy, they focused on the precedents in international environmental law — notably integrated, legally binding treaties like the Montreal Protocol on the ozone layer. The United Nations Framework Convention on Climate Change reflects that kind of thinking. Today, as the failures of that system become evident, negotiators are turning to new models and looking for a fresh opportunity to get it right.