In the spring of 2008, U.S. Interior Secretary Dirk Kempthorne — an appointee of President George W. Bush — held a conference call with a blue-ribbon panel of scientists to discuss whether polar bears should be placed on the endangered species list. Given the Bush administration’s environmental record, many of the 19 scientists were apprehensive about how Kempthorne was going to respond to their report, which warned that projected climatic changes in the Arctic would lead to the probable elimination of two-thirds of the world’s 20,000 to 25,000 polar bears in much of their range within 45 years.

Kempthorne said he had given serious consideration to the studies by U.S. and Canadian experts that led them to support listing polar bears under the Endangered Species Act. He then thanked them for their work and said he could find no flaw in any of the nine studies they had conducted to come to their conclusion.

“My hope is that the projections from these models are wrong, and that sea ice does not recede further,” Kempthorne said a few days later in announcing his decision to list the polar bears as a “threatened” species. “But the best science available to me currently says that this is not likely to happen in the next 45 years.”

If ever a set of facts — and a government action — underscored the impact of global warming, this was it. But in the months since Kempthorne’s decision, global warming skeptics have insisted that the climate change models used by the panel of experts were wrong, that polar bears have survived warming in the past, and that the species can adapt to a life on land by eating goose eggs and berries.

Unlike projections of future climate disruption, these changes are happening now.

The war of scientific words over the future of the polar bear has not just taken place on fringe Web sites, but has spilled into the pages of The NewYork Times, the U.K.s Daily Telegraph, and several scientific journals. And though the arguments of global warming skeptics have been widely discredited, they seem to have created enough of a gray area to provide cover for the Canadian government not to initiate management plans that might help some polar bear populations weather the warming that is destroying their icy habitat.

One reason the polar bear has become such a passionate topic of debate is its power as a symbol of climate change, with one skeptic lamenting that the bears have become the “poster-series for doomsday prophets of global catastrophe from anthropogenic climate change.”

But the polar bear image has power for a reason: Arctic sea ice is rapidly shrinking. Polar bears are being adversely affected as the key element in their habitat — ice — disappears. And unlike models and projections of future climate disruption, these changes are happening now — swiftly and dramatically.

The debate over whether the polar bear is truly in trouble vividly highlights the assault that global warming skeptics often make on mainstream science, with a disparate band of dissenters — many of them weighing in 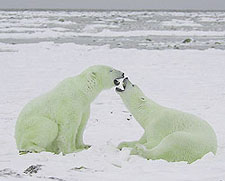 Photo by Ed Struzik
Polar bears spend most of the year on sea ice, which they use as a platform for hunting prey.

on issues in which they have little expertise — challenging the extensive research of a wide array of scientists. Among those offering dissenting views on polar bears and climate change are a marketing professor from the University of Pennsylvania, a graduate student in ornithology from the City University of New York, and a fisheries scientist. Other entities such as the Safari Club, an organization representing big-game hunters, and the Alaska state government, under Gov. Sarah Palin, have also tried to discredit the science underlying Kempthorne’s decision.

These groups and individuals have taken on members of the blue-ribbon advisory panel, including polar bear biologists and climate experts from the U.S. Geological Survey, the U.S. Fish and Wildlife Service, the Woods Hole Oceanographic Institute, the Canadian Wildlife Service, the Wildlife Conservation Society, and several American universities.

“It has been frustrating,” acknowledges Ian Stirling, a Canadian Wildlife Service scientist who has worked on polar bears for more than 35 years. “But nothing that has been said or written changes anything. The science here is as solid as it can be.”

The science is straightforward. As greenhouse gas concentrations in the atmosphere rapidly increase, the Arctic is warming significantly. Satellite images show that the extent of Arctic summer sea ice has decreased by roughly 30 percent since 1979, reaching a historic low two years ago. Thicker, multi-year sea ice also is disappearing.

Those facts are incontrovertible. So is the fact that over tens of thousands of years, polar bears have evolved to spend most of their lives — and do nearly all of their hunting for their favored prey, ringed seals — on sea ice. This is especially true in spring, when the bears fatten up on seals so the female polar bears can put on sufficient calories to gestate and nurse cubs. Not only is Arctic sea ice declining overall, but it is breaking up earlier in spring; in some regions — such as western Hudson Bay — sea ice has been melting three weeks earlier than in the mid-1980s, depriving polar bears of a vital feeding opportunity.

Over the past two decades, studies in western and southern Hudson Bay show that polar bears are growing thinner, that undernourished females are having smaller litters, and that females are giving birth to lighter cubs that do not survive as well.

Stirling and Steve Amstrup, a U.S. Geological Survey polar bear biologist who headed the blue-ribbon study panel, have seen telltale signs that polar bears are also in trouble in the southern Beaufort Sea. In Alaska especially, polar bears are increasingly likely to den on land rather than on the sea ice because the ice is not as stable a denning platform as it once was. Furthermore, increasing numbers of polar bears have been seen hundreds of miles inland or swimming far offshore.

Some of the contrarian views on polar bears started off innocently enough. In the journal Polar Biology, for example, ornithologist Robert Rockwell and graduate student Linda Gormezano, both associated with the American Museum of Natural History and City University of New York, suggested that polar bears on the west coast of Hudson Bay — which now spend as much as five months fasting on land in summer and fall — might find relief in the future by turning their attention to snow goose eggs. The study evolved out of Rockwell’s decades-long work on snow geese in Hudson Bay.

The snow goose specialists aren’t alone in suggesting that polar bears could adapt to life on land. In the current issue of The Journal of Mammalogy, Markus G. Dyck, an instructor at Nunavut College in Iqaluit, and Ermias Kebreab, an associate professor at the University of Manitoba, suggest that if sufficient berries are available on land, they could possibly replace calories the bears lose from eating fewer seals at sea. Dyck and Kebreab predict that polar bears will adapt if sea ice continues to decline. 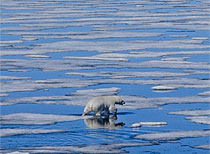 Photo by Ed Struzik
As summer sea ice disappears, polar bears are increasingly likely to den on land because sea ice is not as stable as it once was.

berries would ever be able to replace the trove of calories the bears now ingest from eating fatty seals. Andrew Derocher, chairman of IUCN’s Polar Bear Specialist Group, has written a soon-to-be published paper with an associate demonstrating that there are simply not enough resources on land — be they goose eggs, kelp, or berries — to replace what the bears get on the ice.

“A few good feedings of goose eggs will pretty much wipe out that resource,” said Derocher, who has worked on polar bears in Svalbard, the Beaufort Sea, Hudson Bay, and Wager Bay in northern Canada. “In the long run, goose eggs can contribute nothing of energetic consequence to polar bears.”

Even the snow geese scientists concede that in 40 years, only six bears — four since 2000 — have been seen feeding on snow goose eggs. In addition, Derocher and Stirling have shown that polar bears lose about a kilogram per day when they are stuck on land. Those periods of food deprivation on land have become prolonged in recent years, but still the bears have not turned to goose eggs or berries for sustenance.

“If polar bears could offset that weight loss and its associated population impacts by taking eggs or other supplemental food they would be doing so now,” said Amstrup.

Another global warming skeptic who has joined the polar bear debate is J. Scott Armstrong, a marketing professor at the Wharton School at the University of Pennsylvania who specializes in forecasting methods. He has made numerous statements in the media and to Congress casting doubt on global warming and its threat to polar bears. Armstrong insists that models used by climatologists to forecast the future of the polar bear in an increasingly ice-free Arctic are worthless. He also maintains that the Earth currently has as much chance of cooling as it does of warming — a statement contradicted by the overwhelming majority of the world’s climate scientists.

The Alaskan government has signed a contract with Armstrong to provide justification for the state’s opposition to the listing of polar bears as a threatened species, despite Armstrong’s lack of scientific credentials.

So far, the most important impact of global warming skeptics on the polar bear issue is their influence over a key Canadian scientific committee that advises the government on endangered species. The Committee on the Status of Endangered Wildlife in Canada decided last year that, despite ample scientific evidence that polar bear populations are facing a grave threat, there was no need to change the status of the creature from “special concern” to threatened.

The Canadian government has not adopted a plan to help polar bears adjust to a warming world.

Their decision was based on a report co-authored by Mitch Taylor, a former polar bear biologist for the Nunavut government in Canada whose study did not link the future decline of polar bears to a loss of sea ice. Taylor is a global warming skeptic who has criticized the U.S. decision to list the species as threatened, has stated that CO2 emissions are not causing Arctic warming, and has claimed that — other than the Arctic — the globe has been cooling since 2000. All of his contentions are contradicted by facts or disputed by the vast majority of climate scientists and polar bear experts.

What most concerns Canadian polar bear experts is that by failing to acknowledge the threat, the Canadian government has not adopted a management plan to help polar bears adjust to a warming world. That plan could include controls on Arctic development, reduced hunting of polar bears, and pollution reduction.

No one is disputing that polar bears have survived periods of warming that occurred during the last interglacial period, about 120,000 years ago. The issue, however, is a red herring. The maximum temperatures of the last interglacial were roughly 2 degrees F warmer than now. Given the rate at which greenhouse gas emissions and temperatures are currently rising, the Earth could easily undergo 3 to 4 degrees F of warming by the end of this century — significantly greater than anything polar bears have experienced during their evolutionary history.

Derocher also noted that the current situation is much different.“There were no people back then hunting bears,” he says. “There was no oil and gas development, no shipping or pollution. People weren’t pumping greenhouse gases into the atmosphere like they are today. You can’t compare the situation today to the one 125,000 or 250,000 years ago and suggest that bears will do just fine.”

Said Stirling, “Given all the controversy, it might sound complicated, but it isn’t: Without sea ice to hunt seals, polar bears are in big trouble.”