Rising high in the San Bernardino Mountains in Southern California, the Santa Ana River flows westward through cities and towns with a total population of nearly 5 million. Along the way, it receives so much sewage that 90 percent of its flow during the dry summer season is effluent, which is cleaned again and again at several dozen wastewater treatment plants. 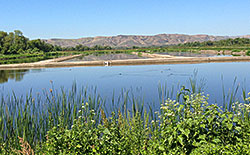 A series of ponds helps remove medical drugs and other water contaminants in the Prado Wetlands in Southern California. CARINA STORRS

Near the end of its 96-mile course, the Santa Ana comes to a seeming standstill in the Prado Wetlands. Covering 425 acres, the wetlands site — designed by engineers — consists of a series of rectangular ponds, through which the river’s gentle flow is controlled by dam-like weir boxes. It takes about a week for water to traverse the wetlands, during which time cattails and other vegetation help remove nitrogen, phosphorous, and other contaminants.

Today, the Prado Wetlands, which are operated by the Orange County Water District, are part of a new project to remove a different kind of pollution: the residues of medical drugs and synthetic organic compounds, such as herbicides, that are found in small concentrations in rivers but that may affect endocrine activity, metabolism, and development in humans. A year-old pilot project at the Prado Wetlands channels river water through three ponds, each about the length of five Olympic swimming pools. Sunlight and bacteria degrade residues of antibiotics, anti-inflammatories, sex hormones, and other drugs and man-made chemicals before the Santa Ana reaches Anaheim, 20 miles downstream. There the river provides the drinking water for 2.5 million people in northern Orange County.

Sunlight and bacteria degrade residues of antibiotics, anti-inflammatories, sex hormones, and other drugs and chemicals.

Concern has risen about the potential danger that may come from drinking water tainted by small concentrations of pharmaceuticals that pass through our bodies and are flushed down the toilet, not to mention other synthetic compounds discharged by agriculture and industry. Research has shown that endocrine disruptors and antidepressants may harm reproduction in fish, and endocrine-disrupting compounds also have been linked to adverse health effects in humans. Scientists also fear that the persistence of antibiotics in the environment could promote the development of antibiotic-resistant bacteria.

Currently, there are no U.S. regulations for medical drugs under the Safe Drinking Water Act, and only a few for the residues from consumer products. However, the U.S. Environmental Protection Agency’s Contaminant Candidate List, which establishes what chemicals should be evaluated for possible regulation, in 2009 included several endocrine disruptors called estradiols, found in products such as birth control pills. The list also included erythromycin, an antibiotic. The European Commission placed two types of estradiols and a painkiller called diclofenac on a similar watch list in 2013.

”There are a lot of potential applications of this technology to give communities a more cost-effective treatment than traditional approaches,” says Larry Barber, a researcher at the U.S. Geological Survey (USGS).

Tests reveal many of the compounds survive passage through wastewater treatment plants.

About 10 years ago, thanks to the development of sensitive detection methods, it became possible to measure trace levels of these compounds in surface water bodies such as rivers. Tests reveal that many of the compounds survive passage through wastewater treatment plants. The EPA is currently investigating how well facilities that treat drinking water remove pharmaceutical products, and whether retrofitting these plants with steps such as reverse osmosis could improve removal. But there are financial and practical drawbacks. Reverse osmosis systems are expensive, and constructed wetlands need tens to hundreds of acres to process large volumes of wastewater.

One of the early indications that constructed wetlands could help treat pharmaceuticals and other synthetic contaminants came from a study of nonylphenol, which is widely present in laundry detergents. Nonylphenol is an endocrine disruptor and has been shown to have potent toxicity in fish. When a research team led by the USGS was testing the ability of a small-scale wetlands system outside of Phoenix, Arizona, to diminish nitrogen levels in the wastewater treatment effluent, they noticed that nonylphenol and its breakdown products were also reduced, some by 90 percent. 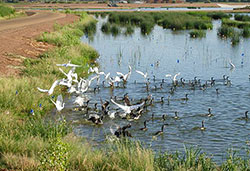 Since those tests, the team has built a full-scale, 380-acre constructed wetlands at the site, called the Tres Rios Wetlands. It is one of the largest in the U.S. and provides water for irrigation and wildlife habitat. It also has three main ponds that remove chlorine, heavy metals, herbicides, nitrogen, and nonylphenol.

Numerous studies have shown the effectiveness of constructed wetlands in removing such contaminants. A 2004 study of the Prado Wetlands found that the site helped reduce levels of ibuprofen and organic chemicals found in pesticides and flame retardants. Scientists in Spain have reported that natural systems efficiently removed a number of anti-inflammatory drugs and pesticides.

Still, many compounds, including some estradiols and antibacterials, are more resistant to treatment in constructed wetlands, with their levels dropping by only about half. “In my mind you definitely want more than 50 percent removal, or why bother?” says David Sedlak, a professor of environmental science and engineering at the University of California, Berkeley.

Sedlak and his collaborators are behind the pilot project at the Prado Wetlands. Inspired by experiments showing that drugs are degraded by sunlight as they move down a river, they worked on developing a new type of constructed wetland design specifically to remove these compounds.

In typical constructed wetland designs, weedy aquatic plants are the focal point, because of the myriad ways they break down contaminants. But they also overshadow, literally, the contribution of sunlight. So about a year ago, Sedlak’s team started testing what they call open-water units at the Prado Wetlands. Now, before wastewater enters the series of cattail-filled ponds, it drifts through one of three large ponds over the course of a day or two. To prevent plant growth, engineers used a simple approach: They put down a tarp along the bottom of the ponds.

At the Texas project, water will first travel through weedy ponds to remove nitrogen.

Although the researchers are still in the first phase of data collection, the new ponds at the Prado Wetlands seem to work as well as a similar pilot-scale system in Discovery Bay near San Francisco that has been operating for about seven years. Early data suggest that open-water units at Discovery Bay remove 90 percent of sulfamethoxazole, an antibiotic often resistant to removal in waste treatment plants. An unexpected benefit is that a layer of algae and bacteria that grows on the tarp-covered pond bottoms appears to bind and degrade compounds.

Ponds similar to open-water units will also be incorporated into the Brazos River Demonstration Wetland, a 12-acre site that engineers started building in January in Waco, Texas. Construction should finish later this year. The project marks the first constructed wetlands designed to optimize the breakdown of drugs while also removing traditional contaminants found in wastewater treatment plant discharge. Brazos will not rely solely on photodegradation to remove compounds. Water will travel through weedy ponds to remove nitrogen and then through subsurface wetlands with very low oxygen levels to help strip out chemicals.

Desalination has long been associated with one process — turning seawater into drinking water. But a host of new technologies are being developed that not only are improving traditional desalination but opening up new frontiers in reusing everything from agricultural water to industrial effluent.READ MORE

Barber, the USGS geologist who worked on the Tres Rios wetlands in Arizona and also helped design the Brazos site, hopes that what they learn will improve design of small constructed wetlands nationwide, as well as larger wetlands that treat wastewater treatment effluent.

Recent research in Europe supports the idea that hybrid constructed wetlands — a combination of surface-level and subsurface ponds that do not freeze in colder climates — most effectively remove endocrine disruptors and other compounds. Environmental agencies in countries such as Denmark, Austria, and Germany currently provide guidelines and set standards for removal of nitrogen, phosphorus, and other contaminants in constructed wetlands. Researchers do not expect official guidelines on levels of drugs and other micro-contaminants until those substances are regulated.

Even without regulations, some communities are willing to invest in constructed wetlands, as evidenced by the Brazos site. “It’s about being proactive in terms of the right way to do water reuse,” says Barber.