Earlier this year, a Continental jet accelerated down the runway at George Bush Intercontinental Airport in Houston. Nothing out of the ordinary for Capt. Rich Jankowski, who countless times in his 38-year career had eased such two-engine Boeing 737-800s into the sky. Except on this experimental flight, one of the engines Jankowski relied on was burning fuel derived from microscopic algae to push the 45-ton aircraft into the air and keep it aloft — a first in aviation history.

Last year, Virgin Atlantic flew the first commercial jet on biofuels, a 40-minute jaunt between London and Amsterdam in which one engine burned a mix of 80 percent conventional jet fuel and 20 percent biofuel derived from coconuts and babassu nuts. Other test flights have followed, culminating in a 90-minute Japan Airlines flight with one engine burning a blend of biofuel from camelina — a weedy flower native to Europe — and regular jet fuel at the end of January.

As global economies strive to wean themselves off fossil fuels, one of the most daunting challenges is to find a replacement for the liquid fuels that power the world’s aircraft. Biofuels made from algae and non-food plants are now the leading contenders. While homes, cars, and offices can be powered by electricity produced from such renewable sources as solar, wind, and hydropower, there is little likelihood in the near future that battery power will be lifting a jumbo jet into the sky. And the global aviation industry uses an enormous amount of jet fuel — energy-dense kerosene — frequently referred to as Jet A or JP-8: The U.S. commercial airlines alone burn about 50 million gallons of jet fuel every day, at a cost of roughly $150 million.

The challenge is how to produce enough biofuel to supply even a fraction of the jet fuel burned every year by the world’s aircraft.

That’s a lot of greenhouse gases, released right where they can do the most damage — high in the atmosphere. The warming properties of jet fuel exhaust are intensified at high altitude, where nitrogen oxides from the jet’s turbines react with other molecules in the upper atmosphere to increase levels of ozone, which traps heat, according to the Intergovernmental Panel on Climate Change. The water vapor that forms contrails and other chemically active gases emitted during flight also contributes to climate change. Although the amount of emissions from aircraft compared with other vehicles is relatively small — roughly 3 percent of total worldwide greenhouse gas emissions from fossil fuel burning — the mix of compounds in jet emissions and their release in the upper troposphere intensifies their heat-trapping power.

The environmental appeal of biofuels — especially if they are produced from algae or other non-food sources — is strong. Preliminary results from an Air New Zealand test flight in December show that burning biofuels — in this case jet fuel refined from jatropha oil — can cut greenhouse gas emissions by at least 60 percent compared to conventional fuel. And, as a bonus, about 1.4 metric tons of fuel could be saved on a 12-hour flight using a biofuel blend.

This month, the International Air Transport Association set a goal of achieving “carbon neutral growth” — meaning an increase in air travel would not emit any more CO2 than the present fleet and flight schedule — by 2020. The keys will be increasing fuel efficiency by 1.5 percent per year and using biofuel blends, according to IATA.

The overwhelming challenge is how to produce enough biofuel to supply even a fraction of the more than 60 billion gallons of jet fuel burned every year by the world’s aircraft. Relying heavily on biofuels made from food 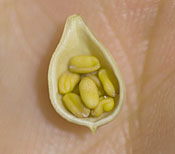 crops — such as soybeans, sugar cane, or canola — would not only affect food supplies and increase food prices, but would produce significant greenhouse gases during the planting and harvesting of these crops, as well as from forest clearing for more agricultural land. Non-food plant sources, such as jatropha and camelina, are promising, but difficult to produce in large quantities and can end up displacing food crops or lead to deforestation if the price of fuel rises high enough. Finally, making large amounts of jet fuel from algae represents a major hurdle, from perfecting the algae’s growth to extracting the oil cost-effectively.

Nevertheless, industry and government interest is driving research and testing into the development of biofuel-based jet fuels. Boeing has been conducting tests with various plant sources, including camelina. And the U.S. Defense Department’s Defense Advanced Research Projects Agency (DARPA) and the U.S. Air Force are working on the development of alternative fuel sources to free the military from its reliance on fossil fuels.

The bulk of the initial bio-jet fuel for test flights has come from jatropha — a poisonous shrub native to Central America — and camelina. Both plants produce oil-rich seeds. Terasol Energy — a company based in the U.S., India, and Brazil and the supplier of the oil for the Continental flight — can squeeze 242 gallons of jatropha oil per acre of farmland in India and Tanzania.

But jatropha and camelina have their own issues, such as the inevitable competition between crops grown for food and crops grown for fuel. The answer to that conundrum might be the microscopic plants known as algae. The tiny plants are not typically a food crop, are capable of producing 60 percent of body weight as oil under the right conditions, and can be grown in salt or wastewater, says David Daggett, Boeing’s technology leader for energy and emissions.

Algal oil can also be precisely tuned via genetic modification, or good old-fashioned breeding, to be the equivalent of crude oil. A host of companies, from San Diego-based Sapphire Energy to San Francisco-based Solazyme, are now experimenting with this potential fuel of the future.

Bio-jet fuels have delivered consistent high-quality results in ground tests and experimental flights. These fuels seem to have overcome the problems that their energy density might be too low (think ethanol versus gasoline) and that they could gel at the low temperatures found at high altitudes (think diesel on a cold day). “All the characteristics are here to make it a very high quality fuel,” says Billy Glover, managing director of environmental strategy at Boeing. “The fuels we’re testing now have equal or better energy content than the Jet A requirements.”

Tim Zenk, vice president of corporate affairs at Sapphire Energy, said the company hopes to produce 300 barrels of oil from algae grown in brackish ponds at its test facility in New Mexico by 2011. In five years, the output should reach 10,000 barrels a day, costing between $60 and $80 dollars per barrel, he says, compared to more than $300 per barrel today for the algae industry as a whole.

“We believe we have a path for achieving biofuel approvals at a 50 percent blend level over the next two years.”

Chemical engineers at the University of North Dakota’s Energy & Environmental Research Center have also successfully turned oil from canola, coconuts and soybeans into jet fuel that rivals the conventional liquid, U.S. government tests show. And facilities to refine such algal oil are already being built. UOP — a refinery business of Honeywell that processed the biofuels used in the Continental test flight — opened the first “ecofining” facility in Livorno, Italy, last year, with a capacity to eventually produce 100 million gallons of diesel fuel for ground vehicles. A Portuguese company, working with UOP, is building a second “ecofining” facility in Sines, Portugal.

“Going to biofuels doesn’t mean we have to make compromises,” says chemist Jennifer Holmgren, general manager of the renewable energy and chemicals business for UOP. “We are already making fuels that look exactly like the real thing, or better. The real limitation is going to be feedstock.”

Industry and the U.S. government are working on a solution to that problem, through a partnership dubbed the Commercial Aviation Alternative Fuels Initiative (CAAFI). As part of that group, the Federal Aviation Administration’s chief scientific and technical advisor, Lourdes Maurice, testified at a Congressional hearing in March that “we believe we have a path for achieving biofuel approvals at a 50 percent blend level over the next two years.”

She also argued that bio-jet fuels represent a unique opportunity within the transportation sector, because air travel relies completely on energy-dense liquid hydrocarbons distributed to a small number of locations. Supplying biofuel to just 35 major airports in the U.S. would cover 80 percent of all jet fuel use in this country, Maurice said.

Any of today’s biofuels produced in quantity would still have to be blended with jet fuel because they lack aromatics — the hydrocarbon rings common in petroleum-based jet fuel that interact with seals in engines, helping swell them shut. “We fully expect that the first fuels will be 50—50 blends or less,” Boeing’s Glover says.

But even such a blend would deliver significant climate benefits. According to Glover, camelina is a particularly promising biofuel source, with one camelina-jet fuel blend reducing carbon emissions by more than 80 percent. Such a blend would also not require any modifications to existing aircraft engines or infrastructure.

That was certainly the case for the FAA’s experimental flight of the Continental 737-800. Engine shutdowns at altitude did not phase the bio-jet fuel, nor did sudden accelerations and decelerations. By the time Jankowski brought the plane back down to Bush Intercontinental at 1:45 p.m., roughly two hours after takeoff, he had burned through some 3,600 pounds of the biofuel, slightly less than the 3,700 pounds of regular jet fuel in the other engine.

“The airplane performed perfectly,” he said at a press conference afterwards. “There were no problems. It was textbook.”

Correction, June 18, 2009: An earlier version of this article incorrectly stated the amount of jet fuel that U.S. commercial airlines burn on a daily basis. The correct figure is approximately 50 million gallons of jet fuel per day, at a cost of roughly $150 million.