Six years ago, Hurricane Ike nearly wiped the barrier island of Bolivar off the Texas map. A 17-foot storm surge destroyed nearly every home in some communities and killed at least 15 people. Long-time residents feared the wild, sandy spit of land between the Gulf of Mexico and Galveston Bay would never recover.

Today, Bolivar is definitely back, and bigger than ever. Small fishing cabins and trailers have given way to candy-colored homes that sit on pilings more than a dozen feet above the ground. What was once a down-home, everyone-knows-everyone kind of place has become a weekend retreat for wealthy Houstonians. Many who grew up fishing at Rollover Pass and biking along the Jane Long Memorial Highway can’t afford to stay; real estate prices have nearly doubled.

With rising sea levels and intensifying storms, experts believe some barrier islands should be abandoned.

Longtime resident Cindy Rodriguez is both surprised and delighted at the change in her hometown’s fortunes.

“There was talk of it being abandoned,” she remembers.

Many coastal zone experts believe that it should have been. With sea levels rising and a changing climate leading to more intense storms, many of the United States’ barrier islands will face existential threats this century, experts contend. But as the aggressive rebuilding of Bolivar Island demonstrates, the warnings of coastal planners, ecologists, and insurance companies often fall on deaf ears. 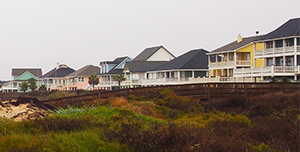 New homes on the barrier island of Bolivar, off the coast of Texas, rebuilt after Hurricane Ike in 2008. RONA KOBELL

Along the New Jersey and New York coasts after Hurricane Sandy, down the shores of Virginia and North Carolina following major storms, and across the Gulf of Mexico coast in the wake of recent hurricanes, rebuilding has taken place on dozens of vulnerable barrier islands. Not only does this recurring reconstruction place billions of dollars of property at risk, but it often means the construction of hugely expensive flood protection and storm-control projects that can harm coastal ecosystems.

Hardened shorelines take away crucial habitat for turtles and waterfowl. Jetties interfere with the growth of sea grasses that crabs and small worms need to hide from predators. Dams, locks, and other barriers change a waterway’s salinity and its sediment content, disrupting the natural growth of oysters, clams, and other salinity-sensitive species.

Efforts to create nature reserves and national seashores on U.S. barrier islands continue. But as the current construction boom on Bolivar Island shows, these conservation initiatives often run up against powerful business and political interests.

“I think it’s ultimately foolish [to develop these islands], and I’m not alone in saying that,” said William Boicourt, an oceanographer at the University of Maryland Center for Environmental Science. “They’re in a dynamic process, and even if you put in a man-made barrier to slow that down, it’s ultimately a losing game.”

Historically, residents of barrier islands have not always looked to the government for millions of dollars in salvation efforts when the sea encroached. Often, they simply left. When Hog Island, on the Virginia Coast, eroded to the point where it was uninhabitable in the 1930s, residents barged their houses to the nearby towns of Willis Wharf and Oyster. Similar tales have repeated themselves in Texas and Louisiana, where barrier islands were popular refuges for pirates but often not considered fit for long-term structures.

But in the mid-20th century, planners and developers began to view the nation’s barrier islands as resort towns in the making — a steady source of tourism dollars, property tax revenue, and construction jobs. Federal and state governments spent big on bridges, dunes, beach replenishment, and public piers to encourage settlement. Government-backed flood insurance encouraged that process, as did the federal government assuming the role of rebuilder-in-chief, said Rob Young, a geologist who directs the program for the study of developed shorelines at Western Carolina University.

“Why do we rebuild on barrier islands?” asked Young. “Because the people who are doing the rebuilding are making a sound economic decision.” The owners may rebuild the home, he said, but “the rest of us are putting back all the infrastructure. We’re raising the road. We’re putting back the beach. The rest of us are assuming all of the risks.”

The people came. Galveston, located on a barrier island across the bay from Bolivar, is a city of 50,000, home to both one of the country’s largest petrochemical corridors and the University of Texas Medical Branch. More than 7,000 people now inhabit Ocean City, Maryland year-round; hundreds of thousands more visit every summer. In Alabama, 1,300 people live year-round on Dauphin Island, a spit of sand in the Gulf of Mexico that has been battered by more than 10 hurricanes and major storms in the past 35 years, but has been repeatedly rebuilt. North Carolina’s Outer Banks has year-round residents on many of its barrier islands. New York’s Fire Island has a small year-round population and a thriving summer one.

If damage from recent storms demonstrates anything, it’s that leaving barrier islands alone makes good ecological sense. These skinny, sandy shoals are lands on the move, shifting, gaining, and losing sand in rhythm with the ocean currents. Their highest grounds are sandy dunes. The rest is wetlands and beachfront, with an ocean or gulf on one side and a bay on the other. They protect the mainland from floods and are prime habitat for migrating birds.

Repeatedly rebuilding barrier islands like Bolivar — whose highest land is just six feet above sea level — carries a hefty price tag. The proposed Ike Dike that will protect Galveston and Bolivar on its Gulf side is estimated to cost at least $3 billion. At least $80 million has flowed into rebuilding Dauphin Island, much of it from federal funds. And Hurricane Sandy’s devastation in 2012 cost at least $65 billion. Since then, there has been little serious discussion of retreating from New Jersey’s 127 miles of heavily developed Atlantic Ocean shoreline, which includes many miles of barrier islands.

Barrier islands are ‘inherently mobile’ and not safe for ‘human facilities with a fixed position,’ a report states.

In a 2014 report, the National Research Council concluded that barrier islands, as “inherently mobile landforms,” aren’t safe for “human facilities with a fixed position.” They are still losing sand, the report said, but they are not gaining it back. That dearth of new sediment could lead to complete submergence of some islands, the report said.

After Hurricane Ike pummeled the Texas coast in 2008, state officials began talking up plans for a Lone Star Coastal National Recreation Area that would protect undeveloped areas along barrier islands and wetlands in the Galveston region. The proposed reserve, which is now before Congress and enjoys bipartisan support, would include 700,000 acres of tidal marshland and more than 350,000 acres of bay and estuarine areas, including parts of Bolivar Island.

Bolivar Island has undergone an unprecedented building boom since Hurricane Ike. Before Ike, the island had a wild feel. Its housing stock was a hodge-podge of some well-built and large brick structures mixed with smaller, homey places. The rebuilt Bolivar retains that feel in itrs older sections. But resorts with names like The Biscayne and Gulfport Village are far more upscale. Locals have taken to calling them bird houses because of their height, color, and décor.

After the storm, many long-term residents could not afford to return. Rebuilding cost too much, and insurance reimbursements took too long. That inability to come back opened the door for developers who had the cash and real-estate agents who had ready buyers in the Houston area, one of the country’s wealthier metropolitan regions. The desire for an upscale and relatively affordable beach house meant a rush to rebuild Bolivar at a pace not seen in other parts of Galveston County. As of 2013, the county had issued 1,542 building permits for the Bolivar peninsula, and only 996 for other unincorporated county areas, according to the Houston Chronicle.

Bolivar would be better ‘as a wild green buffer of flood protection than having it built out,’ says one conservationist.

During a recent visit, “For Sale” signs dotted the roads, along with billboards urging new lot owners to call custom builders. Even under rainy skies, builders were working, framing out houses on raised platforms and clearing old debris.

Richard Gibbons, conservation director of the Houston Audubon Society, said he is “very, very surprised” at the pace of development.

“The Bolivar peninsula would be much better serving as a wild green buffer of flood protection rather than having it built out,” he said.

The American Bird Conservancy has designated part of Bolivar Island as a Globally Important Bird Area. Some winters, more than 10,000 American avocets descend upon its still-wild parts. Plovers, spoonbills, pelicans, egrets and loons are among the species living there year-round or migrating.

Since the 1980s, the Houston Audubon Society has been buying up property on Bolivar for conservation with other nonprofit partners. It now owns more than 2,000 of the peninsula’s 11,689 acres. After Ike, Houston Audubon sensed an opportunity to purchase more. But Gibbons said the group has given up on acquiring any property in Crystal Beach, where pastel houses line an expansive shoreline with only a thin ribbon of dunes separating the sea from homes.

With federal dollars for coastal protection becoming ever tighter, barrier islands have to compete with places like New Orleans, Miami, and Norfolk for funds. Because of high reconstruction costs, state and university officials discussed moving the University of Texas Medical Branch from Galveston inland to Austin — a move that would have cost billions of dollars and meant the loss of a major employer. In the end, the university and stayed on the island, in part because rebuilding the facility’s high biosecurity labs would have been extremely expensive.

But barrier islands with less political clout won’t be so lucky, said Joe Fehrer, a project manager for The Nature Conservancy’s Virginia Coast Reserve. “The small communities are the places that just are going to go away,” Fehrer said.

Fehrer knows that story too well. His father, Joe Fehrer, Sr., had the difficult task of telling those who bought lots on Assateague Island in the

ALSO FROM YALE e360A Year After Sandy, The Wrong Policy on Rebuilding the Coast

One year after Hurricane Sandy devastated parts of the U.S. East Coast, the government is spending billions to replenish beaches that will only be swallowed again by rising seas and future storms. It’s time to develop coastal policies that take into account new climate realities, argues geologist Rob Young.READ MORE

1950s and 1960s that they would never have a chance to build their dream homes on the Maryland barrier island famous for its wild ponies. After the Ash Wednesday storm of 1962 flooded thousands of “buildable” lots, the National Parks Service bought the island.

Assateague’s purchase was part of a trend toward preserving barrier islands for their most appreciative visitors: migratory birds that rely on the shifting sands to expose horseshoe crab eggs, small worms, and other food sources. Among the most precarious is the migratory rufa red knot, which in December became the first bird named to the endangered species list because of climate change and rising seas.

A chain of barrier islands south of Assateague is now part of the Virginia Coast Reserve, which Fehrer helps manage. Several of the islands once had development plans on the books. But The Nature Conservancy stepped in and now owns parts of 18 barrier islands, including Hog Island. It also owns much of Cedar Island, where a developer built dozens of homes on the ocean side in the 1980s; nearly all were in the surf two decades later.