Deep in the African rainforest and three days from home, a tribal hunter, punting down a backwater, puts aside his spear and takes out a GPS handset. He doesn’t need the Global Positioning System to know where he is. He is intimate with every inch of his tribe’s forests. But he taps an icon on the screen to identify the burial ground, sacred grove, or wildlife-rich swamp he is passing, then puts the handset back in his hunting bag, and carries on. The data on the handset will later be uploaded onto remote sensing maps created by Google Earth. Now his knowledge can be shared with the world.

These days, across the rainforests of central Africa and in South America, Southeast Asia, and other parts of the world, the new weapon of choice for defending community lands against outsiders is digital mapping technology. The aim is to produce maps that governments cannot ignore and that will help inhabitants to claim legal ownership of their lands and to fight back against ministers and officials intent on handing over their forests to loggers, mining companies, and other outside exploiters.

In a largely unheralded technological revolution, thousands of forest dwellers have been trained in how to combine their old ways of marking and remembering territory, in which a boundary might be “the big tree by the river two days’ walk away,” with digitized mapping techniques. “It is becoming a powerful tool of advocacy,” says Georges Thierry Handja, the Cameroonian technical advisor for the Rainforest Foundation UK, a Western NGO active in the field. 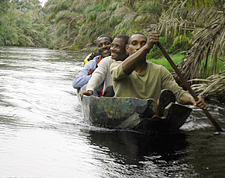 The Rainforest Foundation/Mapping for Rights
Villagers navigate a river in northeast Gabon as part of mapping program supported by the Rainforest Foundation UK.
Consider events in the Democratic Republic of the Congo, formerly Zaire. There, in the aftermath of a long civil war, the government is currently zoning its forests — which cover as much as 316 million acres, an area nearly the size of France, Germany and Spain combined — in preparation for their mass allocation to logging companies. Old European timber conglomerates want to reactivate their concessions, some dating back almost to the brutal days more than a century ago when the entire country was run by King Leopold of Belgium. Logging newcomers from Malaysia and China also want a slice of the action.

Faced with the threat of losing their lands, both Bantu farmers and indigenous hunters in the western province of Bandundu, a center of rubber harvesting in Leopold’s time, have been mapping their forests. Each community has produced an initial sketch map of their area. Then more than 400 volunteers from 200 remote villages, all trained by Handja and his colleagues to use GPS handsets, have traveled for days by boat or on foot to record the precise locations of important points on their sketch maps — not least the boundaries of their territories.

“When communities are involved in mapping their lands,” Handja says, “they can play an important part in the conservation, management and development of forests.” The Bandundu mapping project, supported by the British government through the Rainforest Foundation, was last year’s runner up in the Buckminster Fuller Challenge awards for “socially responsible design in solving the world’s complex problems.”

The Congo project is part of a wider movement now occurring from the rainforests of Guyana, to the Australian outback, to the boreal forests of Canada’s native communities — and even in the urban slums of India. The idea, which some trace back to community action in the South Bronx in the

The idea is to enable local people to document their areas and advocate for them — whether fighting off loggers or real estate developers.

1990s, is to enable local people to document their own areas and advocate for them — whether fighting off loggers or real estate developers.

In the Democratic Republic of the Congo (DRC), forest mapping is intensely political. The community mappers hope they can successfully challenge a rival zoning process being funded by the U.S. government and run by the U.S. Forest Service for the DRC government. This zoning project is a preparation for handing out new logging rights in untouched forests.

The official mapping does not require anyone to go into the field — or even to set foot in the Congo. It uses remote sensing imagery without any “community truthing.” It ignores the customary land rights of the forest communities.

In theory, the government’s macro-zoning and the community micro-mapping could be complementary. But in practice they are in direct competition, said one insider close to the zoning process, who did not want to be named. The projects embody entirely different ideas about who should control the forests. This person told me: “The zoning commission does not make any reference to communities and their participatory mapping. The idea is that once the forest has been zoned and allocated to loggers, then the new concession holders will have the job of organizing how and whether forest communities can live within the zones.” 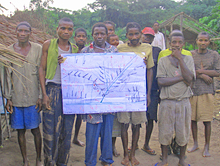 The Rainforest Foundation/Mapping for Rights
Villagers in the Democratic Republic of Congo hold up a map created during a GPS mapping project.
If the zoning proceeds on this basis, it would be a travesty of fairness. But it may not. An agreement has been reached on a new DRC law that would establish community rights to forests and define how communities can use their own mapping to get formal title. Activists say the new law has been sitting on the desk of the prime minister for many months, but that he has not yet submitted it to the parliament to become law. Meanwhile the zoning process that would, in effect, negate those community rights is going ahead.

Cath Long of the London-based NGO Well Grounded, which helps forest communities, recently visited Bandundu. “All of the forest belongs to different clans, with clearly delineated boundaries between clan lands,” she says. With community maps digitized, “it should be relatively straightforward for communities to enter into the process of claiming a formal title.” The question is: will it happen?

Similar questions dog enthusiastic mappers elsewhere in the world. In February, 20 farming and fishing communities of the indigenous Wapichan people in the South American nation of Guyana announced the completion of their own digital mapping of three million acres of traditional forests, pastures, and wetlands. It is part of their campaign to get title to their land, so they can protect it from road and dam projects.

Like their African counterparts, the Wapichan people held village meetings to discuss the technology and identify the features of the land they cared about. They then used GPS to position their farms, spiritual and cultural sites, and villages and to catalogue wildlife areas noted for jaguars, giant

The concept is spreading to urban slums, shanties, favelas and other unmapped settlements across the developing world.

river otters, and endemic fish and birds like the Rio Branco antbird. The GPS screens featured customized symbols for key features that could be clearly recognized by the indigenous operators.

“After ten years of work, we are very proud of the end result,” said Kid James of the South Central People’s Development Association, which provided the technology. “We are now keen to share our territorial map with government authorities to show how we occupy and use the land according to custom and how we are attached to our territory.”

Of course, outsiders, particularly environment groups, have been producing maps of remote forests and indigenous territories for a long time. But proponents of participatory mapping say this method gives communities “ownership” of the results. The difference, they say, is as great as the difference between an outside film crew moving in to make a film of a forest community, or supplying digital cameras so the locals can make their own film.

The concept is now spreading to urban slums, shanties, favelas and other unmapped settlements across the developing world, where mapping is being deployed as part of community advocacy against real estate developers.

The street networks and buildings of these slums are often not marked on official maps because no official mappers have ever gone there. They are as much terra incognita to the official world as the rainforests of Africa. By mapping the roads, houses, and commercial activities of their communities, the inhabitants of the slums hope to emphasize to city officials their economic and social importance.

Armed with vivid images from space and remote sensing data, scientists, environmentalists, and armchair conservationists are now tracking threats to the planet and making the information available to anyone with an Internet connection, Rhett Butler writes.READ MORE
An upcoming special issue of the journal Environment and Urbanization will tell their stories. One paper describes mapping in Epworth, a slum suburb of Harare, the capital of Zimbabwe. Residents “armed with tape measures and paint” located the boundaries of every plot, marking hedges, wells, and toilets, as well as roads, drainage ditches, and other infrastructure, before digitizing the information and superimposing it onto satellite images from Google Earth. Then, says Beth Chitekwe-Biti of the Dialogue on Shelter for the Homeless in Zimbabwe Trust, a Zimbabwean NGO, they took the digitized data to planning officers as part of a campaign to get their tenure in the squatter colony officially recognized in law.

Similar projects are documented in slums in Cuttack in the Indian state of Orissa, Nairobi in Kenya, and several cities in Uganda. The journal’s editors conclude that when officials no longer see slums as hostile, unknown territory — when they recognize them as places where real people have lived for decades, building communities, improving their streets, and running businesses — then they will begin to see the point of preserving and investing in them, rather than sweeping them away.

Similarly, the hope is that once rainforest inhabitants are seen as custodians of the forests rather than destroyers, then their rights too may be more easily secured.