Bouncing along bad roads in a jeep through central Mongolia, with bright blue skies and high clouds overhead, we drive for miles through a treeless landscape, passing only dry grasslands dotted with cattle and white yurts. But as we head north — myself, two U.S. scientists, and one Mongolian forestry expert — we begin to notice Siberian pine and larch growing on the northern slopes of rolling hills, but not the southern slopes, and at some elevations, but not others. In water-scarce Mongolia, as my travel companion Neil Pederson of Columbia University’s Lamont-Doherty Earth Observatory explained, the precarious growth of trees is limited by temperature and moisture availability; small variations — northern slopes are slightly cooler and wetter — can make all the difference.

Our destination is a 30-square-kilometer lava field in north central Mongolia, where a volcano oozed magma some 7,000 years ago. The pockmarked black surface looks like a moonscape, with only a few scraggly trees and dry deadwood littering the ground. But this is precisely what has brought Pederson and his colleagues to Mongolia since 1995 — the ability to sample long-lived, slowly decaying trees, some dating back more than 1,300 years. By examining ancient tree rings, Pederson and a research partner at West Virginia University, Amy Hessl, can glean information about historic rainfall patterns, as pines grow more in wet years.

By piecing together this data, Pederson and other scientists from Lamont-Doherty hope to shed light on a vital question: How will climate change affect Asia’s life-sustaining monsoons, which control the seasonal

alternation of wet and dry periods over a region home to roughly half the world’s population?

Similar expeditions to gather tree-ring samples in more than a dozen countries throughout Asia — including China, India, Pakistan, Nepal, Burma, Cambodia, Thailand, Vietnam, Japan, and Indonesia — fuel an ambitious database at the Earth Observatory called the Monsoon Asia Drought Atlas, which was rolled out with a 2010 article in Science.

The atlas provides researchers and climate modelers a detailed set of past precipitation records across Asia, useful both for mapping the duration and extent of past droughts and weather anomalies, and for providing an analogue against which climate modelers can test their algorithms. Forecasting how global warming might affect Asia’s monsoons — vital to agriculture and drinking water supplies from Pakistan to Japan — is exceedingly complex, in part because so many variables are involved, including rising ocean temperatures, increasing amounts of pollution in the atmosphere, and fluctuating weather phenomena such as El Nino. 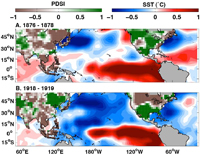 Edward R. Cook, et al/Science
Two maps depict severe Asian droughts. In both cases, the droughts were associated with strong El Nino events.
“Most recent evidence suggests that the strength of the monsoon is weakening, whereas climate models tend to predict that it should be strengthening,” says Lamont-Doherty’s Kevin Anchukaitis, pinpointing one of the quandaries that climate scientists are now grappling with. “One of our goals [with the atlas] is to try to understand better what controls the strength of the monsoons on longer time scales, so that we can differentiate natural variability from the influence of human activity and greenhouse gases.”

The challenges of forecasting how Asia’s monsoon patterns may change reflect a larger problem of understanding future climate change across different parts of the globe.

“We understand much better how global mean variables are going to change than what changes will look like regionally,” says Hai Cheng, a geologist and paleoclimatologist at the University of Minnesota, who is not directly involved in the atlas project. In explaining the utility of long-term historical data sets, he says: “One fundamental test for any climate model is: Can it replicate what happened in the past? If it can’t, how can you have confidence in your model to predict the future?”

The quest for long-term proxy records of past precipitation, against which future climate models can be checked, is what has brought the Lamont-Doherty researchers to the Mongolian lava field. 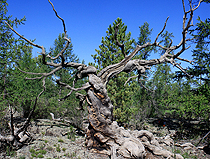 Photo by Neil Pederson
A dead Siberian pine, many hundreds of years old.
“We’re looking for trees with minimal bark, lots of weathering, and a bulbous base,” Pederson said, scrambling over black lava to inspect deadwood. Although the scientists won’t be able to date tree-ring samples until they’re back in the lab, certain visual clues indicate which trees, standing or fallen, might be the oldest and the most promising to examine. Putting on noise-muting headphones, Pederson waves for me to stand back, then wields a chainsaw to cut a cross-section of a dead Siberian pine laying on the ground. Back in the lab, he’ll sand it down to a fine grain and examine the rings under a microscope.

Meanwhile Anchukaitis is knocking lightly on a standing tree. “You tell by the sound if it’s decayed and hollow inside,” which would make tree rings difficult to recover and study. Judging this larch a good candidate, he uses a tree corer to extract a cylindrical sample approximately the width of a pencil. He slips it into a drinking straw, which doubles as a sheath to store the tree cores in the field. “If you have a large enough network of tree-ring chronologies, you can see the spatial expression of the past climate [and] the scope of past droughts,” says Anchukaitis.

Mongolia is an important research location, on the outer edges of the monsoon rain belt. But the most populous countries to be affected by changes in monsoon patterns are India and China.

Most climate models forecast that monsoon rains will become heavier as the world warms, in part because of a basic law of physics: As air warms, it is able to retain more moisture. “For each 1 degree C increase in global

‘Livelihoods, water security, and energy security are all tied to the volume and timely arrival of monsoon season,’ says one scientist.

mean temperature, you could expect about a 7-percent increase in water vapor in the air,” explains William Boos, an assistant professor of geology and geophysics at Yale University.

Krishna Kumar Kanikicharla is a scientist at the Indian Institute of Tropical Meteorology and a coordinating lead author of the Intergovernmental Panel on Climate Change’s working group on Future Regional Climate Change. His laboratory is involved in creating projections for how the South Asian monsoon will be impacted by climate change.

“Assuming a projected 2-degree C temperature rise by mid century, we anticipate that the monsoon winds may decrease, but rainfall will increase, by about 8 to 10 percent in volume,” Kanikicharla said via Skype from Pune, India, which is now experiencing its summer monsoon rains. (Seventy to 80 percent of annual rainfall throughout India falls between the months of June and September.) Meanwhile the duration of the rainy season in India may shorten, from an average of 60 days of heavy rain today, to about 40 to 50 days in the future, Kanikicharla said.

“This means we expect that there will be heavier rainfall on fewer days,” he said, with implications for flood management as well as storing water for future use. “Also, the variability of monsoon rainfall is likely to increase in the future… this could lead to both more floods and more droughts.” 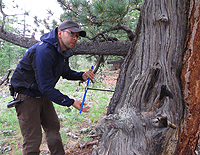 Photo by Christina Larson
Researcher Kevin Anchukaitis uses a coring device to sample a tree ring in central Mongolia.
In a country where more than half of the population works in agriculture, Kanikicharla was quick to point out how the monsoon rains dictate the rhythms of life: “Livelihoods, water security, and energy security are all tied to volume and timely arrival of monsoon season.”

In the past several years, the monsoons have confounded modeling and actually brought less rain to India and other regions. The total volume of rain is down more than 20 percent in India this year, Kanikicharla said, adding “It’s going to be a tough year for India ”¦ Great uncertainties exist.”

One reason the monsoons are not behaving as predicted may be the vast amounts of pollution and black carbon — from such sources as cooking fires and diesel exhaust — being spewed into the atmosphere from booming economies in China, India, and other parts of Asia. A paper published this summer in Nature Climate Change said such pollution higher in the atmosphere can reflect solar radiation back into space, reducing surface warming that would be expected to lead to wetter weather. But the study’s authors said many questions remain unanswered, noting that black carbon particles can have other effects — including absorbing heat in the atmosphere — that can influence monsoons.

China is currently experiencing a variety of impacts from the monsoon, ranging from an extended drought in southern China to a heavy monsoon season this year in northern China. Although the three regional monsoon systems — the South Asian monsoon, the East Asian subtropical monsoon, and the Southeast Asian/Pacific tropical monsoon — are shaped partly by land-ocean temperature differences, Weihong Qian, a professor at the Monsoon and Environment Research Group at Peking University, expects climate change to have a somewhat different impact on the monsoons over India and China: “The South Asian monsoon will change only in its intensity, while the rainfall zone of the East Asian monsoon will advance northward.”

In its quest to find new sources of energy, China is increasingly looking to its western provinces. But, as Christina Larson writes, the nation’s push to develop fossil fuel and alternative sources has so far ignored a basic fact — western China simply lacks the water resources needed to support major new energy development.READ MORE
Bin Wang, professor of meteorology at the University of Hawaii, was visiting Lanzhou, China this summer to conduct fieldwork. He offered a similar assessment: “In general, recent model results point to a consensus that Asian monsoon rainfall will increase, in particular in East Asian sectors — in northern China and Mongolia and parts of Russia, Korea, and Japan. Also, the monsoon in terms of geographic scope will extend a little bit westward and northward. Moist air will penetrate into land area more than before.”

If so, that might sound like welcome news to shepherds in Mongolia in search of greener pastures. But Wang also cautioned about the extent to which scientists are still fine-tuning models of the monsoon: “Study of the past can help to understand future change,” he said. “But we still have to be careful in evaluating all the different forces acting on the climate system.”