What years of dwelling in the cold Atlantic had amassed, an army of knife-wielding, white-suited Norwegian factory workers were taking apart in just minutes. In a consummate display of optimization, streams of fish parts were whisked along on conveyor belts around and above me, with various cuts destined for their most appropriate markets. Nothing was wasted — not skin, fins, bones, offal, or roe. Fresh tongues went straight to Oslo. Whole heads were bound for Nigeria. 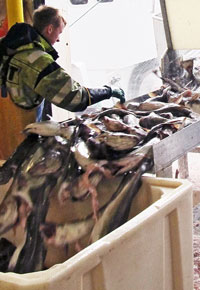 Workers at Norway Seafoods unload tens of thousands of pounds of cod each day. JOHN WALDMAN

What was most remarkable, though, was the identity of the fish being processed in what seemed like a sheer embarrassment of biomass: The Atlantic cod — a species that many North Americans would recognize as an emblem of overfishing and regulatory failure.

At Georges Bank and other historical cod fishing grounds of New England, stocks of the once plentiful groundfish are at near record lows. In the fisheries of the Canadian Maritimes, the cod population long ago succumbed to overfishing and collapsed. And yet in the Arctic Circle village of Melbu, at one of nine Norway Seafoods cod processing plants, a productive fishing industry is thriving.

On both sides of the Atlantic, it’s the same species with the same habitat facing the same societal reliance on this staple food source and economic engine. And yet one fishery now yields a sustainable annual catch of one million tons, while the others have failed or are failing.

Norway and Russia arrived at an enviably cooperative and far-sighted strategy for managing cod.

The reasons why are a study in international cooperation and adept resource management.

The reliance of northern economies on codfish cannot be overstated: A slogan still heard across the species’ range is “In Cod We Trust.” But Canada can no longer share such conviction. Europeans who had already reduced their own stocks had sailed to Canada’s waters beginning in the late 1400’s to harvest from virgin banks that abounded with cod — so much so, it was said at the time, that one could simply drop a fishing basket down to catch them.

From then until the 1950’s, annual yields of what was known as the Northern Cod Stock were indeed trustworthy at about 250,000 tons. But technological advances in detecting and catching fish schools, larger ships with larger holds, and increased fishing effort drove the stocks ever lower. So far down, in fact, that an ecological regime shift occurred, with what is essentially a new fish and shellfish community that appears resistant to returning to its original state. 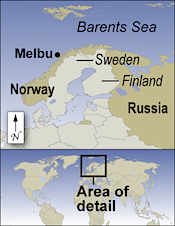 A Norway Seafoods plant in Melbu processes cod from the Barents Sea. FREEVECTORMAPS.COM

Ultimately, the biomass of northern cod was reduced to a shocking one percent of its former profusion, leaving Canada’s fisheries minister no choice in 1992 but to close the Northern Cod fishery. This act had drastic social consequences. No longer could Canadians trust the cod to sustain a generations-long way of life; 40,000 immediately dropped out of this once $500-million-a-year industry. Many had no other skills to fall back on and in a decade the population in Newfoundland fell by ten percent. Once thriving villages became ghost towns and most of those who stayed were forced to go on government assistance as they waited for the cod to return—an eventuality that seemed inevitable given the draconian protective measures. Twenty-two years later they are still waiting.

Meanwhile, across the Atlantic, enough “skrei” cod — the migratory stock of the Barents Sea — are being landed to provide almost three billion fish meals per year, a little-known but impressive success on an overfished planet. What is most unusual, though, is that the oversight is binational, with Norway and the Russia arriving at an enviably cooperative and far-sighted strategy. It happened in stages, with both nations beginning what are now considered classic scientific investigations of their fisheries late in the nineteenth century. The formation of the International Council for the Exploration of the Sea in 1902 encouraged contacts between Norwegian and Russian scientists, but the outbreak of World War I resulted in minimal cooperation until mid-century. 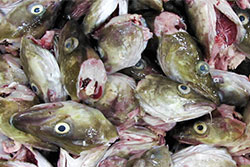 All parts of the cod are used, including the heads, which are shipped to Nigeria. JOHN WALDMAN

Scientific exchanges between the Norway and what was then the Soviet Union resumed in the 1950s, with regular meetings leading to the commencement in 1965 of cooperative, in-depth, multi-vessel surveys in what is now known as the Barents Sea Ecosystem Survey. This led to the implementation in 1976 of the Joint Fisheries Commission between Norway and the Soviet Union, which sets harvest control rules. Under their agreement, the parties use those rules alongside regular scientific stock assessments to settle on a total allowable catch, or TAC. Norway and Russia share about 80 percent of the TAC, with the rest allotted to other nations with historical rights to fish in the area. Norway and Russia may fish their share in either of the economic zones of the Barents Sea.

Sustainability is encouraged with particulars such as these: Norway Seafoods trawlers drag their nets over the same lanes to avoid habitat destruction. Norwegian rules require all incidental catches of non-target species, or bycatch, to be used as food and to be considered in the ecosystem analysis — indeed, a Norway Seafoods fisher is automatically fired if found tossing even a single bycaught fish overboard.

That this is working became apparent to me as I stood by the back door of the Melbu factory, where I was on hand last March as a guest of Whole Foods as it explored potential sustainable finfish sources. I watched as tub after tub of medium- and large-sized cod were unloaded from one of the trawlers and rolled away to be disassembled by the 80 employees standing ready at their stations. Each day, workers there land between 15,000 and 20,000 pounds of skrei cod. The fish arrive reliably every spring to spawn off the Norway coast because, simply put, they persist in high abundance through careful management.

Canada, meanwhile, has proved an extraordinary example for the world on resource depletion. No better illustration exists on the importance of the precautionary principle in fisheries — that is, the notion that it is incumbent on those who manage the resource to demonstrate that their actions are sustainable. In Canada, an increasingly desperate fishing industry pressured regulators to permit landings that the nation’s scientists claimed were risky — economics trumping nature, with predictably dire consequences.

Both Russia and Norway have real skin in this game and provide a check on each other.

But the real hallmark of the Barents Sea fisheries is almost certainly its binational character. Both Russia and Norway have real skin in this game, and they provide a check on each other. This contrasts with Canada’s failure at unilateral management of its cod stock, and even with arrangements at the other extreme, like the International Commission for the Conservation of Atlantic Tunas, which requires majority agreement among 49 nations — some of which rarely encounter an Atlantic tuna before regulation can be adopted.

Since 2004 the U.S. and Canada have shared a quota on the transboundary eastern cod management unit at the once cod-rich Georges Bank, with other units managed alone by the nations on either side of an international boundary. This management regime is not working, with cod on Georges Bank in steep decline. The same is true for the Gulf of Maine cod stock, where changing ecological conditions and fishing have led to all-time lows in the volume of reproducing cod — just 3 to 4 percent of what is required for a strong, sustainable fishery. Already the U.S. government has allocated $32.8 million in disaster relief funds to assist affected New England fishermen.

I asked Harald Gjøsæter, a research scientist with the Institute of Marine Research in Norway, why he believed their management system was successful when their counterparts in North America have struggled. “Managers of other cod stocks should strive towards a common understanding among managers, fishers and scientists about what is needed to obtain sound management,” Gjøsæter replied, “and then try to implement relevant rules and regulations.”

As sound as that advice is, the history of fisheries management shows that it is easier said than done, which is all the more to the credit of the skrei cod fishery. Still, I nudged Gjøsæter to recount mistakes that had surely been made along the way. Tellingly, given the region’s adherence to the precautionary principle, he offered that the stock had been mistakenly underfished during one season some years back, and that in retrospect it was believed that more cod could have been safely landed.

Clearly, Canada’s and, to a lesser extent, the United States’ experience with cod provide a frightening case history that has rippled through subsequent global fishery management. But it is important to keep in mind examples such as the Barents Sea cod fishery, which provide clear evidence — and maybe even inspiration — that we can do better.