Would enlisting millions of small companies in a national response to climate change be worth the effort? Their prominence in political rhetoric suggests that it might. Small business owners are attractive political icons — entrepreneurs personify American ideals of free enterprise, innovation and self-reliance. But their individual contributions to greenhouse gas emissions are small, and in practice, getting millions of entrepreneurs to agree about anything is like herding cats; we are a diverse, independent, and competitive group. This leaves the value of a small business response to climate change unclear.

Actual evidence is scarce. New technologies and LEED-certified buildings dominate the news, but the majority of small companies are neither clean-tech start-ups, nor likely to build new facilities. Experiments with my own company, which fits this common profile, suggest that we can reduce greenhouse-gas emissions rapidly and cost-effectively, and that some of the barriers to action are misunderstood.

I own a design firm, and my work on climate change exhibitions for the Marian Koshland Science Museum of the National Academy of Sciences and the Birch Aquarium at Scripps Institution of Oceanography earned me the nickname “the closet climatologist” and provided an education about the potential consequences of unchecked global warming. These experiences engendered a sense of urgency about finding practical ways to mitigate greenhouse gas emissions. Like many Americans, I felt compelled to act and, because I am a business owner, I had the opportunity to try.

My company’s frustrating search for effective, affordable opportunities eventually led to a surprising discovery: Cost-saving opportunities to reduce carbon emissions are ever-present in the normal course of business operations.

My test bed is a small creative services company located in Southern California. Our 10 employees occupy a two-story, 2,000-square-foot, commercially-zoned residence that was built in the 1930s and upgraded during the mid-90s. Our facility has fairly good natural light and ventilation, but suffers from enormous heat gain. Owning this facility provided the flexibility to consider making long-term investments in the property, but we have not actually implemented them yet. Our experiment indicates that smaller, less-expensive steps can be extremely effective.

I began with an observation from Daniel Esty and Andrew Winston’s Green to Gold that successful sustainability programs are usually built upon extraordinarily ambitious goals. Green business plans that set impossible targets force people to look at problems in new ways. I found a suitably improbable goal in California’s landmark Global Warming Solutions Act (AB 32). AB 32 requires California to reduce emissions to 1990 levels by 2020, and to 80 percent below 1990 levels by 2050. Since our company does not employ long-lived capital equipment, I reasoned that we should try to accelerate this timeline.

One employee asked if I was crazy, but our conversations helped establish a green-conscious culture.

We joined the California Climate Action Registry in early 2008 to take advantage of its low-cost emissions verification program, and we submitted our 2006 data to establish an emissions baseline. We set aggressive emissions targets: a reduction of 10 percent by 2010, 20 percent by 2013, and 80 percent by 2020, with similar goals for water use and landfill waste. One employee asked whether I was crazy, but our frequent conversations helped establish a green-conscious culture within a few months.

I traded the company’s small SUV for a Prius because it offered the highest mileage available at the time, and because the merits of biodiesel were in dispute. Next, we took our electric utility company’s advice and called them for an energy audit. In a pattern that is typical for service businesses, our air conditioning, computers, and other office equipment dominate our energy usage. The utility re-lamped our building — a $300 savings. We signed up for a program that lets the utility cycle our air conditioning during peak demand events, and we eliminated “vampire power” by turning power strips off at night. Unfortunately, the utility could not offer incentive programs for solar PV, cool roofs, weatherization, or low-E windows to businesses of our size, so we were left to rely on our own research and financial resources.

In setting a budget, an energy consultant told me that many companies invest three times their annual utility costs in efficiency upgrades. While this number is fairly arbitrary, it suggested that we might spend about $10,000 on carbon abatement. As a point of reference, a solar PV array, plus a carport structure we would need to build in order to aim solar panels southward, would have cost nine times that amount.

By the end of 2008, we had reduced emissions by 65 percent and cut electricity costs by 40 percent.

Unfortunately, government incentives on solar power were small in 2008, and our type of corporate structure disqualified us anyway. These barriers have since been lowered, but our experience suggests that we can benefit from improving energy efficiency, as a first step toward going solar. In fact, an architect recommended that we improve the passive efficiency of our building so that we might eventually invest in smaller, less expensive air conditioning and solar energy systems based on reduced demand. He recommended a highly reflective metal roof with additional insulation, which would have cost a prohibitive $40,000. Finding heat-gain data for less expensive roofing options proved to be impossible, so we were back to square one.

Then events took us by surprise: The lease on our copier expired, and we chose an energy-efficient, multi-function machine that allowed us to decommission two other laser printers, a laser fax, and a scanner. The print quality is so good that we reduced our large-format plotting by 75 percent.

Over the summer, our air conditioner broke down. We replaced it with the most energy efficient model we could afford, and took the opportunity to improve airflow through some of our ductwork. The total cost was $7,000.

The results of these simple steps have been extraordinary. By the end of 2008, we had reduced greenhouse-gas emissions by 65 percent, gasoline use by 63 percent, landfill waste by 45 percent, and water use by 18 percent. We cut costs for electricity by 40 percent, gasoline by 59 percent, and water by 20 percent. But the net savings are even more impressive: When vehicle and equipment maintenance, paper and toner, and other related costs and savings are considered, the company saves about $9,000 annually, which we can apply to further energy-efficiency upgrades.

In addition, we are experimenting with telecommuting, and we rescheduled supplier visits to coincide with commuting. We continue to learn lessons about maintaining teamwork in this process, and we have reduced employee driving by 43 percent, and reimbursed mileage costs by 29 percent. 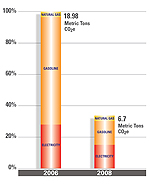 The implications could not be clearer: There is a strong business case for slashing carbon emissions through simple, low-cost energy efficiency improvements. Energy efficiency upgrades look expensive when the payback comes entirely from energy cost savings, but we found additional savings on maintenance, supplies, and more. This finding is important because it belies the myth that reducing emissions necessarily requires investing in systems with high up-front costs and very slow payback. We are now approaching the threshold where solar PV will make sense for us, but we cut our emissions by nearly two-thirds before reaching that threshold.

Neither building ownership nor financing for expensive upgrades was a prerequisite for success in our case. But the scarcity of information about which actions work was an almost prohibitive barrier. Small business owners cannot afford to hire energy consultants, and it is unrealistic to think that many business owners will duplicate our research efforts. Even with all of our success, my company is not sure which efficiency upgrades to pursue next.

We will continue to reduce electricity demand by replacing older computer equipment that is obsolete anyway. Thereafter, we must turn to our building itself, and we will probably need help to be successful with that. Like every other small company, we would benefit from information that helps us prioritize options. Which of the following investments is likely to provide the best balance of up-front costs, fast payback, and emissions reductions: cooler roofing, window and wall shading, better natural ventilation, water-conserving landscaping, flash water heating, or solar water or PV? We simply do not know, and finding answers is beyond challenging.

Regulators have told me that they are confounded by the sheer diversity of small businesses and their circumstances, which may be why current information resources merely report anecdotal achievements. But our experiment suggests that they could do better with further analysis. Developing information that is genuinely useful to small business owners should be a top priority for government agencies.

Reducing energy demand and carbon emissions is everyone’s business, and we have shown that it is good business, too. Our 12.3 metric tons reduction in emissions is not significant compared to total U.S. emissions of nearly 7 billion metric tons, but this comparison misses the point. In the end, these reductions were absurdly easy to achieve, and they pay dividends. Duplicating them across the nation’s 29.6 million small businesses would yield significant gains.

More importantly, people create new behavioral norms when they tackle problems together. Small businesses employ half of the private-sector workforce, so engaging the nation’s small businesses can create a new culture of energy efficiency quickly, if the proverbial cats can be harnessed in this challenge.