Next week, the U.S. Congress is expected to vote on the bulk of $60 billion in emergency spending to provide for recovery from Hurricane Sandy. Clearly, significant aid is needed to repair the damage left by the storm and to help many people put their lives back together. But the bill before Congress includes provisions authorizing spending that would be fiscally irresponsible and environmentally damaging and would set a very bad precedent as we plan for long-term adaptation to rising sea levels and climate change.

The bill goes far beyond the immediate need for emergency assistance by funding a massive coastal engineering effort that is not based on science or wise planning. As currently proposed, the bill would give the U. S. Army Corps of Engineers roughly $4.5 billion to spend on coastal construction projects related to “flood control and risk reduction.” Most troubling, the bill requires the Corps to attempt to rebuild the New Jersey and New York beaches to their “design profile.” In other words, the Corps will work to put the beaches back exactly as they were before the storm, ignoring the reality of rising sea levels and intensifying storms as the world warms.

This is not emergency disaster relief. It is the development of coastal policy. And that ill-advised policy is this: We will try to hold the precarious shoreline in place and protect property and infrastructure with a major investment of taxpayer dollars in coastal engineering.

The money should be spent on long-term solutions such as buying out owners of high-risk properties.

What’s worse, the Corps need only determine that a project is “cost effective.” Projects do not need to have been previously authorized or reviewed, and environmental impacts need not be addressed. The Sandy bill even authorizes the Corps to spend, without environmental review, roughly $1 billion “to address damages from previous natural disasters” unrelated to Hurricane Sandy.

It may be that we, as a nation, decide that it is worth spending billions of dollars to rebuild this nation’s beaches, but the decision should not be taken quickly, or lightly. Such rebuilding projects will only provide temporary relief from rising sea levels and storms — we will need to spend the money again. And there should be full consideration of the science behind the design of each project and the environmental impacts, which the current bill ignores.

Coastal experts across the country have implored local and federal leaders to take an enlightened approach to replacing infrastructure damaged by Hurricane Sandy and to look for opportunities to change the footprints of communities in an effort to reduce exposure to the next storm. If we are going to invest federal dollars in reducing property at risk in a community, we should be spending the money on long-term solutions, such as relocating roads and buying out the owners of high-risk properties. There are numerous examples of the federal government moving entire towns out of the floodplain after inland floods, including Vallmeyer, Illinois along the Mississippi River. But because it involves high-priced real estate, relocation has never been considered an option for coastal resort communities.

I am not suggesting that the coast should be abandoned. I am suggesting, however, that federal investment in maintaining obviously vulnerable development be reconsidered.

Federal investment in maintaining obviously vulnerable development should be reconsidered.

One might wonder why these coastal resort communities, located in areas of clear and persistent hazard, would continue to rebuild after complete destruction. This is largely due to the fact that the federal and state governments currently provide multiple incentives to rebuild rather than relocate.

The funds for this rebuilding come largely through the public assistance sections of the 1988 Stafford Act. This is the legislation that created the well-known federal system of emergency response. When the president makes a federal disaster declaration for a county, aid dollars flow in with few strings attached, as clearly evidenced in the current proposed emergency spending bill. A community can repeatedly replace the same infrastructure, such as an oceanfront road. Dauphin Island, Alabama has been hit by storms 10 times in the last 30 years, receiving roughly $80 million from the federal government for an area of around one square mile with only 400 homes. 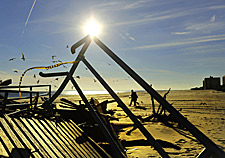 The remains of a damaged boardwalk on a beach in the Rockaways in New York. SPENCER PLATT/GETTY IMAGES

While private insurers are pulling back from the coastal zone, public insurers are filling the void. The National Flood Insurance Program (NFIP), administered by the Federal Emergency Management Agency, provides vulnerable properties access to flood insurance that would not be available in private markets. Last week, Congress passed the first part of the Sandy emergency funding bill, allocating a $9.7-billion increase in the borrowing authority of the NFIP just to meet the insured losses from this storm.

Many states have government-managed pools to keep rates for non-flood property insurance artificially low. The largest insurer of coastal property in Florida is the state, through its Citizen’s Property Insurance Corporation. In places where public funding of health care would be anathema, politicians see little irony in the fact that insurance for coastal investment property is provided by the government.

Finally, federal and state taxpayers have spent billions of dollars over the last four decades pumping up beaches in front of coastal properties and constructing coastal protection projects. In New Jersey alone, approximately $1 billion in public funds have been spent just to preserve beachfront properties — many of them second homes of well-to-do people — and oceanfront infrastructure. The spending for coastal protection in the current Hurricane Sandy bill will make past spending look trivial.

Coastal management by emergency spending has been typical of the federal approach for many years now. But it really shouldn’t be like this. Taxpayers should not be subsidizing the risk of developing in areas of known hazard, and we clearly shouldn’t be using federal funds to rebuild homes and protect beaches in areas we know will be lost again. At the very least, we need to allow market forces to set insurance rates and property values without the current government subsidy and risk underwriting.

Taxpayers should not be subsidizing the risk of developing in areas of known hazard.

Including spending on future shore protection projects in an emergency spending bill is the wrong approach. Developing a long-term plan for reducing storm and flood risk along a heavily developed shoreline requires time, good science, and a thorough evaluation of the viability of each project. This bill opens the door to a rush of bad decisions with little to no accountability.

The federal government has made an effort to reduce wasteful spending on coastal protection projects during both the Bush and Obama administrations. This one bill will undo 10 years of restraint.

On a positive note, the bill includes $500,000 to evaluate the degree to which pre-existing beach and dune nourishment projects protected property during Hurricane Sandy. The media has widely reported the anecdotal evidence that communities with engineered beaches fared better during the storm than others. But this assertion has not been tested by any systematic, scientific evaluation. Nor does a project’s success at reducing property damage automatically imply that the project is cost-effective for federal taxpayers. So here the Senate bill clearly recognizes the need to understand the efficacy of these very expensive federal projects, but authorizes the spending of billions of dollars before we even get the answers.

New York City had been gradually preparing for a world of rising seas and more powerful storms. But the devastation caused by Hurricane Sandy, Bruce Stutz writes, is forcing officials to consider spending billions of dollars on storm protection, including a network of surge barriers.READ MORE

The way we as a nation begin to address the long-term vulnerability and viability of coastal resort communities like those along the Jersey Shore deserves a real debate, not a quick, emotional response. The shore protection projects proposed in this emergency bill are temporary fixes. Over the long run, the federal government will not be able to hold every beach in America in place as sea levels continue to rise and storms batter our beaches. The costs are tremendous and are only going up.

If we are going to authorize the spending of $4.5 billion for shore protection, it should be done in a way that is fair, has a national perspective, uses the best science to decide which projects are likely to last and provide the most benefit with the least environmental harm, and assesses the cumulative impacts of reengineering hundreds of miles of coast.

Louisiana has created a model for how this might work. The state’s 2012 Coastal Master Plan evaluated hundreds of potential coastal restoration and protection projects within a framework that was scientific and unbiased. Projects were then prioritized based on the potential outcomes and benefits, not on expediency or politics. There were winners and losers, but the process was fair and organized. Most importantly, there was a recognition that the map of southern Louisiana will look differently 50 years from now than it does today. We can’t protect everyone and everything in situ.