Africa’s oldest national park will soon be echoing with the sounds of geologists conducting seismic surveys to establish the size of the park’s oil reserves — in direct defiance of requests from the United Nations, conservation groups, and the British government. The survey in Virunga National Park, a World Heritage Site in the east of the Democratic Republic of the Congo (DRC), is set to begin any day now. This comes just two weeks after the park’s chief warden, Belgian prince and conservationist Emmanuel de Merode, was shot during an ambush on the road to the park.

Known for its “mountains of the moon,” Virunga National Park lies in the east of the Democratic Republic of the Congo. FIVERLOCKER/CREATIVE COMMONS

There is no evidence to suggest that the two events are linked in any way. But they underline a growing sense of crisis about the future of the park, which is slightly smaller than Yellowstone. It includes mountain forests, wetlands, savanna grassland, volcanoes, and lakes, and it is home to Africa’s largest surviving populations of mountain gorillas and hippos. It is believed to have more biological diversity than any other protected area in Africa.


Virunga National Park was created by Belgium’s King Albert I in 1925. It is centered on Lake Edward and the Rwenzori Mountains, often known as the “mountains of the moon.” Virunga has always been remote, and frequently lawless, especially in recent decades during the country’s frequent bouts of post-colonial civil war.

But the outside world has been intruding. As many as a million people live in the park. Large areas were trashed for firewood when refugees from the Rwandan genocide fled there in the 1990s. Some refugee camps and militia groups such as the Hutu-led Democratic Forces for the Liberation of Rwanda (FDLR) and the Tutsi M23 group remain active there. The militias are said to control both poaching and the illegal mining and charcoal industries that operate in the park.

Virunga contains roughly a quarter of the 880 mountain gorillas that remain in the wild.

Poaching is rampant. Virunga once had the world’s largest hippo population, with some 29,000 of the animals in the 1970s. Currently there are around 1,200, a recovery from the nadir of 350 in 2005. Hippo meat has become a delicacy in some parts of Africa, and hippo teeth are regarded by some as a substitute for elephant ivory. Under the protection of researchers such as Jane Goodall, the mountain gorillas live on, however. Virunga contains roughly a quarter of the 880 that remain in the wild.

But efforts to police the park have been fitful. Park wardens and government troops have been implicated in the illegality. It was after one such scandal in 2007 that de Merode, an anthropologist married to Kenyan palaeontologist Louise Leakey, became park director.


It is dangerous work. A study published in February by researchers at the New York-based Wildlife Conservation Society and others, concluded that park law enforcement effectively ceases beyond three kilometers from patrol posts.


One reason is that away from their posts, rangers are prey to the militias. De Merode is the latest and most celebrated in a long line of victims. As de Merode told Yale Environment 360 in an interview last year, some 150 rangers have been killed in the park in the past 20 years. Since that interview, two more have been killed, with FDLR guerrillas heavily implicated.


And now comes oil. In 2010, the DRC government defied international criticism to allocate 85 per cent of the park to oil concessions. With the French oil giant Total last year ruling out any drilling in Virunga, the London-based oil firm Soco International is the only concessionaire with active plans in the park.


Soco, which originated in 1991 as an offshoot of Snyder Oil Corporation in the U.S. and now has a market valuation of about $2 billion from activities in Vietnam and elsewhere, believes that reserves currently being explored by several companies over the border in Uganda extend into the park.

Soco International claims oil can be extracted from Virunga without doing environmental harm.

More controversially, Soco claims that the oil, which is thought to be mostly under and around Lake Edward, can be extracted from Virunga without doing environmental harm. And the company suggests that its activities can “help raise living standards for local communities to levels sufficient to reduce their pressure and negative impacts on the protected area.” So far Soco says that it has improved a road, built a medical center, and installed a mobile phone mast at Nyakakoma, one of three legal fishing villages in the park. 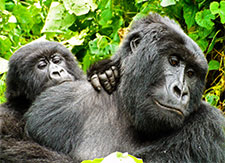 The DRC government, whose state oil company has a 15-per-cent stake in the enterprise, reiterated its support for the oil exploration in a statement in March. This support extends to the government agency in charge of the park, the Congolese Institute for the Conservation of Nature (ICCN), which issued a permit to Soco allowing the oil-exploration activity.


The ICCN’s best-known employee, de Merode, has in the past publicly voiced opposition to exploiting oil in the park. But back in the capital city of Kinshasa, his bosses have issued Soco a permit to work there — effectively an exemption from a 1969 national law banning resource exploitation in national parks — and received a fee for doing so. Under DRC law, the ICCN is permitted to issue exemptions not only for scientific studies but also for projects deemed to be in the wider national interest.


Whatever the politics in the DRC, internationally there is little support for the idea of seeking oil in an iconic national park that was elevated to the status of a World Heritage Site by UNESCO in 1979. UNESCO warned in 2011 of the “extremely harmful repercussions of this type of activity for the outstanding universal value of Virunga National Park.” It called on the DRC government to halt all oil exploitation in the park. Last October, British foreign affairs minister Mark Simmonds said: “The U.K. continues to oppose oil exploration in Virunga National Park.”

A new development has brought Virunga to wider attention in recent days: the well-publicized release at the Tribeca Film Festival this month of a documentary, Virunga which both chronicles de Merode’s work and shows footage suggesting that Soco supporters have tried to bribe park workers. The company says the film contains allegations that are “unfounded and inaccurate.”

WWF contends the greatest long-term economic value of Virunga is as a tourist attraction.

The conservation group WWF, a long-time opponent of the oil plan, says that oil exploitation is not needed to bring economic development to eastern DRC. It contends that the greatest long-term economic value of Virunga is as a tourist attraction, coupled with fishing in Lake Edward, which currently is the main legal source of income for local people. Many places have oil; few places have mountain gorillas.

Last October, WWF formally complained to the U.K. government’s National Contact Point, which is charged with upholding the international Organization for International Cooperation and Development (OECD) guidelines on business ethics. It claimed that Soco’s activities in Virunga have “breached global corporate social responsibility standards,” because oil exploration in a World Heritage Site is prohibited under the World Heritage Convention, and because it risks damaging the environment and local communities.

The company complained that WWF was making “sensationalist and inaccurate statements.” In February, the National Contact Point rejected some charges but said Soco had a case to answer on others, including environmental and human rights issues. It suggested that the case be submitted to confidential mediation. Campaigners see Soco’s decision to go ahead with the seismic survey without waiting for the mediation to be completed as a deliberate snub to its critics, the OECD, and the British government.

WWF International executive director Lasse Gustavsson said his organization “condemned in the strongest possible terms Soco’s unacceptable operations in Virunga National Park.” In a separate statement, WWF added, “Fishermen, farmers, activists and entrepreneurs are enduring intimidation and threats against their safety for speaking out against oil. They are vehemently against Soco’s operations.”

The company told Yale Environment 360 in a statement last week that its seismic survey methods would be “environmentally sensitive” and would be carried out on Lake Edward from ships towing equipment underwater and with sensors on the lake bed. In addition, the company noted that the one third of Lake Edward that lies in Uganda has already undergone seismic testing. The company says all its activities in the park’s lowlands will be several tens of kilometers from where the mountain gorillas live, and that oil exploitation — complete with drilling rigs, pipelines and roads — can be compatible with conservation.

A monitoring system has been set up to audit its progress. Serge Darroze, a DRC-based consultant, told Yale Environment 360 that in response to environmental concerns, his organization, OKAPI Environnement Conseil, has been commissioned by Soco to do inventories of fish and mollusks in Lake Edward as well as of hippos in the wider park.

With de Merode still recovering from four gunshot wounds to his abdomen and legs, the park appears to be teetering on the edge. Tensions clearly rose with the arrival of Soco’s seismic survey team. WWF said last week that portions of Lake Edward would be closed to fishing during the survey work so as not to interfere with the seismic operations.


Critics say that Soco’s activities will result in a further militarization of Virunga National Park. The lawlessness has meant that Soco employees and contractors usually travel in the park with government soldiers. This has in the past exacerbated tensions with local communities and, reportedly, with park rangers. In June 2012, local groups claimed that during a visit by Darroze to the village of Nyakakoma, a park ranger was stabbed by a military officer assigned to Soco. The company has rebutted this claim.

The Perils and Rewards of Protecting Congo’s Gorillas

Emmanuel de Merode, chief warden of Virunga National Park, is still recovering from wounds he received in a shooting ambush last month. In a 2013 interview with Yale Environment 360, de Merode talked about the threats faced by his rangers and the remarkable survival of the park’s gorillas.READ MORE

Some might argue that more law and order is exactly what the park needs to protect its wildlife and natural resources. But a study in the park conducted by the Wildlife Conservation Society (WCS) and USAID A concluded in 2010 that conservation activity was not just a victim of the continuing conflicts but was a contributory cause.

The study author, WCS’s regional director Andrew Plumptre, reported that local communities regarded the conservation approach of the ICCN and its rangers “as one of the important sources of conflict.” Plumptre said that conservation strategies “focusing on strict resource protection and excluding communities from management decisions — i.e., non-participatory ‘fines and fences’ approaches — are unlikely to succeed in securing the natural resource base in densely populated areas.” In other words, it made enemies of the most obvious custodians of nature.

Instead, Plumptre called for “conflict-sensitive conservation strategies, to ensure that the conservationists are aware of the context in which they are working.”

Four years on, the shooting of de Merode suggests that aim is far from being achieved.

Update: On June 11, 2014, Soco International announced it will end its operations in Virunga National Park. The company said it will withdraw from the park within a month and committed to remaining out of all other UNESCO World Heritage Sites.