David Read is a big guy, six-foot-two, but the grass behind him inches above the crown of his khaki fisherman’s hat. He gestures off toward his house across a swishing, dancing expanse of stems, leaves, and early-autumn wildflowers, and smiles. “We wanted to sit on our back porch and watch grass swaying in the wind,” he says. Which is exactly what it’s doing this September day, finally.

It wasn’t always so. In the 1990s when he and his wife Alisande bought this property, 38 acres in exurban Dexter, Michigan, it was fallow farmland slowly succumbing to invasive shrubs. In 2003, after retiring, they set about restoring 11 acres of it to native prairie.

Read has done most of the work himself, at times putting in 20 hours a week or more lopping and herbiciding weedy brush, as well as seeding, mowing, and burning. He estimates they’ve spent nearly $15,000 on seed, equipment, herbicide, and some outside help. He might be a little nuts, Read concedes, but if so, he has a lot of company throughout the U.S. Midwest and Great Plains.

Prior to settlement by Europeans, prairie blanketed an enormous swath of central North America, from Canada south to Texas, and from Indiana west to Colorado — nearly 600,000 square miles of grassland all told. This complex ecosystem was home to a diverse and teeming web of life, including now-tattered bison populations. Farming and development have reduced much of this iconic American landscape, particularly in the wetter eastern areas. There, tall-grass prairie, a habitat dominated by grasses that can grow eight feet high, now occupies less than 1 percent of its former range, putting it among the world’s most endangered ecosystems, according to the U.S. National Park Service. In the central prairie zone, so called “mixed-grass” ecosystems have suffered similar losses, while in the drier, less populous West, short-grass prairies have fared better.

Some people are re-creating prairie where it never was before — on land that was originally forest or wetlands.

Government agencies and conservation groups, aided by volunteers, have undertaken numerous restoration projects across U.S. and Canadian prairieland, some of them thousands of acres in scale. In recent years a cadre of private citizens has joined in, restoring prairie to their own properties, from city yards up to 100 acres or more around rural homes and farms. In some cases they’ve re-created prairie where it never was before — on land that was originally forest or wetlands before settlers plowed it for crops.

The hub of this do-it-yourself restoration activity is Iowa, southwestern Wisconsin, northern Illinois, and Minnesota, says Daryl Smith, director of the Tallgrass Prairie Center at the University of Northern Iowa. That’s probably because the region’s native prairie is so precious. Iowa’s, for instance, is down to one tenth of one percent of its original extent.

Federal, state, and local programs offer financial and technical assistance, particularly for larger private projects on agricultural land. Conservation groups also offer some help. And a cottage industry of consultants, contractors, and native-plant nurseries has arisen for landowners who can’t do it all themselves. With so many players involved, no one seems to have a bird’s-eye view of just how much prairie is being restored on private land. By all accounts, however, the trend is growing, even if it may be all but impossible to quantify. “I’ve been in this business since the early ‘70s and there’s definitely been increasing numbers each year of prairie plantings,” Smith says. “We just haven’t kept a record of it. 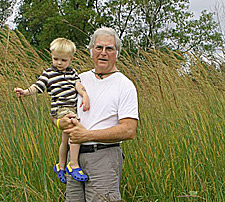 As David Read wrote in an essay, “Prairie restoration is not for wimps!” It can be labor-intensive and technically challenging. People are educating themselves on the intricacies of grassland ecology, planting genetically modified “Roundup Ready” crops so they can blitz the soil clear of invasive species’ seed before sowing prairie plants, and bringing in heavy equipment to drill, till, spray, and seed. They are setting fire to their land to mimic nature’s way of keeping trees out and replenishing soil nutrients. In some places, they are banding together to swap work on one another’s properties, which one Wisconsin prairie buff likened to the barn raisings of years past.

“It definitely takes a combination of expertise in how to go about doing it and an investment up front either in money or in time,” says Chris Kirkpatrick, executive director of The Prairie Enthusiasts. “It’s a lot of doing things at the right time in the right order.” The 1,200-member group has 11 chapters in Wisconsin, Illinois, and Minnesota, up from five a decade ago. The work diminishes after a few years as the new prairie becomes established, Kirkpatrick says. Compared to lawn, prairie is cheaper in the long run, takes less work, and consumes no fertilizer and less water and fossil fuel for mowing, he says.

Folks who prefer that others do the heavy lifting can hire design, preparation, seeding, and maintenance for an acre of prairie for between $2,200 and $5,000, says Neil Diboll, president of Prairie Nursery in Westfield, Wisconsin. Diboll, an eminent advocate of native-plant gardening, says he has completed a few projects exceeding $100,000.

The payoff is the reappearance of native wildlife in places that for decades could not support it. That is abundantly obvious on the Reads’ property, where the shimmering trill of thousands of insects nearly drowns out the tidal roar of traffic from nearby I-94. Read says coyotes, foxes, deer, raccoons, skunks, possums, rabbits, owls, hawks, and numerous other birds are regular visitors, as are decidedly nonnative feral cats. A couple summers ago they had an explosion of enormous dragonflies that would cruise just above the grasses. “You could tell when they got outside the prairie,” he says, “they’d turn around and come back again.”

The payoff is the reappearance of native wildlife in places that for decades could not support it.

“We say build it and they will come,” says Mark Sargent, who runs a Michigan Department of Natural Resources program that helps landowners restore prairie and other native habitat to encourage vulnerable grassland and game bird species. That program has helped restore some 40,000 acres in the past decade, according to Sargent, “a lot” of it prairie. Twelve years ago, he and his wife began restoring prairie and wetlands on their 53 acres outside of Charlotte, Michigan, and he says the difference in birdlife is striking. For the first two years, he says he would flush an average of one game bird every three times he went out hunting. Now it’s five every time.

Bigger prairies obviously offer more wildlife habitat, and connected ones allow species to spread over larger territories, preventing gene-pool stagnation, Sargent and other experts say. But even small patches count as pocket refuges for native wildlife that may have few alternatives. 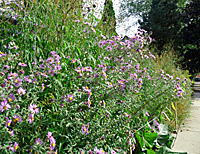 In the Water Hill neighborhood of Ann Arbor, a number of residents have turned their city lots into prairie. Thirteen years ago Karen Sharp bought a house here, with a wild scraggle of vegetation shielding the front porch. The former owner returns occasionally to do carefully controlled burns of the little prairie, squeezed in between all the old wooden houses. “It looks really freaky. Cars will stop,” she says. “It’s black, charred front lawn. And it smells. It smells charred for a week or more. It really puts you off.”

The plants grow back quickly, though, and she says she has wildflowers with little effort and no water at the height of the summer when many of her neighbors’ yards are brown. “I love the privacy. I love the insects and the birds, and I love the flowers. And I love seeing how it changes every year,” she says.

In ecologically-minded places like Ann Arbor, prairies have gained a measure of acceptance, but elsewhere would-be prairie planters have had to battle city nuisance codes, fines, and neighbors that regard their projects as weedy eyesores. There’s also the question of longevity. Most prairies will always require some maintenance to keep out trees, brush, and invasive species, which subsequent owners may or may not keep up, experts say.

In ecologically-minded places like Ann Arbor, prairies have gained a measure of acceptance.

There have already been casualties, according to Roger Anderson, a plant ecologist and professor emeritus at Illinois State University. He’s seen a few undone in real estate transactions or, in the case of one 25-year-old restoration on school property with over 100 native plant species, by a new school principal who just didn’t get it.

There are larger market forces at play, too. With grain prices skyrocketing because of the demand for ethanol, farmers have been plowing under native grasses they planted just a few years earlier with help from the U.S. Department of Agriculture’s Conservation Reserve Program (CRP), according to Smith of the Tallgrass Prairie Center and other experts. CRP staff estimate that 11.6 million acres of land currently enrolled in the program in 14 prairie states have been planted primarily with native grasses. It would be a stretch to call many of these projects full prairie restorations, especially since landowners are only bound to keep enrolled lands out of production for contract periods of 10 or 15 years. Nevertheless, they do add a great deal of wildlife habitat, and the loss of it hurts, Smith says.

Lawn may long be king, but it is surrendering some ground as people increasingly welcome the helter-skelter beauty of prairie around homes and buildings, says Diboll, who remembers locals referring to his nursery as the “weed farm” in the 1980s. “It’s like any social change event,” he says. “It’s a change in attitudes and styles, and those things take time.”