The Korean peninsula was once called geum-su-gang-san, “a land of embroidered rivers and mountains.” Before South Korea industrialized in the postwar years, the rivers were wild-running freestone streams barreling down the mountains and turning into sandy shallow rivers edged by wetlands as they reached the sea. In her 1898 book Korea and Her Neighbors, 19th-century travel writer Isabella Bird described the upper Namhan River as “where pure emerald water laps gently upon crags festooned with roses and honeysuckle, or in fairy bays on pebbly beaches and white sand.”

That world is long gone now, as the Namhan and nearly every other South Korean river has been dammed, forced into concrete channels, or otherwise re-engineered by successive governments that have funneled billions of dollars to the powerful construction industry to fund countless public works projects designed to tame the country’s rivers. Today, besides a handful of creeks deep in the mountains or protected in national parks, only one major river, the Dong, exists in a natural meandering and un-dammed state.

Now, in part to boost the fortunes of the construction cartel in a global recession, there is a new public works offensive: the Four Rivers Restoration Project. The $18 billion plan will further develop Korea’s four major river systems — the Han, Nakdong, Geum, and Youngsan — with the stated goals of preventing water shortages, improving water quality, bolstering flood control, and creating “eco-friendly culture spaces” for tourism. The work would require building 16 new dams on those rivers, rebuilding 87 old dams, reinforcing 209 miles of riverbanks, and dredging 570 million cubic meters of sediment from 428 river miles. On 14 tributaries there will be five new dams and nine more will be rebuilt, and 151 miles of riverbank will be buttressed with concrete. 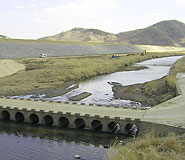 many stretches have been straightened and channelized. But for the large numbers of migratory birds that still pass through South Korea, the ceaseless work will further erode dwindling habitat. The Geum River, for example, still has a massive flock of Baikal teal, but many of those birds will have to find new roosting territories as the river’s remaining shallow, reed-filled areas are excavated and deepened. One researcher at the state-funded Korea Institute of Construction Technology called the Four Rivers Project a “grand disaster that any expert can clearly foresee with common sense.”

South Korea has over 18,000 dams that create man-made reservoirs. By comparison, China has a world-record 87,000 dammed water reservoirs, but China has roughly 100 times the land area and nearly 30 times as many people. South Korea is roughly the size of Indiana, which means that almost every creek, stream and river in the country is dammed or has water barriers — such as weirs or drop structures — that impede fish migration. Floodplains are now rice paddies safely behind the levees and excavators plow into the streambeds and flatten them out for flood control.

One of the most recent riverine “restoration” schemes was the Saemangeum reclamation project on the west coast. South Korea’s largest public works project, the Saemangeum wiped out the estuaries of two rivers and an expansive tidal flat of critical importance to the migratory birds of the Australasian flyway. Bureaucrats are still wrangling about what to do with the newly created landfill area that is six times the size of Manhattan.

Korean environmentalists opposed the Saemangeum, to no avail. They are aware that other countries are restoring streams and rivers by removing dams and taking down concrete walls and that South Korea’s river restoration projects are diametrically opposed to internationally accepted principles for the ecological restoration of aquatic resources.

Despite the fractured riparian habitat, wildlife do their best to survive and abound in some places. Korean water deer, leopard cats, and raccoon dogs skulk along the shoreline, their tracks easily seen in the mud. Korean anglers cast lures for river tarpon and largemouth bass that must continually adapt to disturbances in river systems.

Environmentalists have had a few victories, primarily their successful fight in 2000 to preserve the Dong River — Korea’s last, large, undammed waterway — from a giant dam that would have drowned the entire Dong River valley ecosystem.

The environmental movement also played a part in torpedoing one of the most grandiose public works schemes in recent decade, the Pan Korea Grand Waterway. Proposed in December 2007 by President Lee

Myung-bak — the former Hyundai Construction CEO nicknamed the “Bulldozer” — the waterway was to have been a super canal system with the 336-mile-long main canal connecting Seoul to Busan. Cargo freighters would have gone up Korea’s longest river, the Nakdong, floating through flooded mountain tunnels to connect to the Han River, which eventually winds through Seoul. South Korea’s four main rivers, the Han, Nakdong, Guem and the Youngsan, were to be heavily dredged, channelized and fitted with locks and dams. Seventeen other smaller canals were added to the plan for a total of 1,926 miles of rivers to be transformed into slow-water canals.

The canal scheme was too much, even for Korea. The president’s proposal was met with a groundswell of opposition from critics who said it would be an environmental catastrophe and a massive boondoggle.

President Lee’s popularity plummeted in the summer of 2008 because of his decision to allow the importation of American beef, resulting in violent demonstrations on the streets of Seoul. To regain the public’s favor, he promised to drop the canal project. At a mid-June press conference he said, “I made a pledge to construct the Pan-Korea Grand Waterway. However, if the people object to it, I will not push it.” Stocks of construction companies across the nation immediately fell.

But President Lee’s plan is now back, in more modest form, in the guise of the Four Rivers project. Under a so-called “Green New Deal” to create an estimated 960,000 new jobs, Lee proposed development of solar, wind, and tidal power; stepped-up production of hybrid vehicles; introduced a tree-planting program; and expanded railways. But the item receiving the largest allocation of money was the previously unheard-of Four Rivers Restoration Project. They are the same four rivers that were the lynchpin of the Pan Korean Waterway.

“President Lee said nothing about greening Korea during his election that I remember,” said Mark D. Whitaker, a professor of environmental sociology at Ewha Womans University in Seoul. “He is attempting to rebrand himself, and [the] same policies, as ecological modernization.”

The Four Rivers project, which is moving forward, will rival the Saemangeum reclamation project in budget, and already mission creep has set in. In March, an additional 50 smaller rivers were targeted to be dredged and embanked. In June, the government announced that one of South Korea’s cleanest major rivers, the Seomjim, would be included. The budget for the Four Rivers project was increased by 60 percent and in July, the Land Ministry announced it had started drafting a master plan to develop 43 more rivers. “It is a plan to renovate virtually every river in the country,” Kim Dong-yeon, an official at the Land Ministry told the JoongAng Daily.

As with the Saemangeum project, the government has provided little information on how the scheme will affect the environment. Scientists and environmentalists accuse the government of hastily preparing an Environmental Impact Statement so construction can begin next month.

“It is not a proper process for such a large development project which will cause a big impact on the riverine environment of the country,” Ma Yong-un, the top wetland expert of the Korean Federation for the Environmental Movement, said in an e-mail.

Nial Moores, co-founder of Birds Korea and one of the top field ornithologists in East Asia, noted that South Korea still has large numbers of birds, many of them migratory. But surviving has become a game of musical habitat for the country’s bird population, and when the sound of the construction stops and starts for the Four Rivers project, the birds must fly to new roosting areas. He predicted that Baikal teal from the new Geum River project “will shift to the Saemangeum reclamation area until that, too, becomes unusable.”

The government has repeatedly stated that the Four Rivers project is completely unrelated to the canal project, but critics think otherwise and the public doesn’t seem to buy that argument either.

Kim I-tae decided to speak out. The 48-year-old researcher at the state-funded Korea Institute of Construction Technology was part of a team assigned to come up with a blueprint for the Four Rivers project for the Ministry of Land, Transport and Maritime Affairs.
Kim posted his opinion on Agora, the country’s most popular discussion board. Entitled “A Researcher Participating in the Grand Korean Waterway,” Kim claimed the Four Rivers project was nothing more than the Grand Canal project in disguise and termed it a “grand disaster.”

Ye was suspended from his job for three months.