By the middle of the century, the scores of billions it cost to compensate the greater New York City area for being unprepared for superstorm Sandy may seem like a bargain. Without major adaptation measures to increase the level of storm protection beyond a 1-in-100-year event, the value of the city’s buildings, transportation, and utilities utility infrastructures currently at risk from storm surges and flooding — an estimated $320 billion — will be worth $2 trillion by 2070, according to continuing studies by the Organization for Economic Cooperation and Development (OECD).

By then, the OECD says, the metropolitan area will rank behind only Miami and Guangzhou, China, at the head of a list of the world’s megacities with the most flood-vulnerable assets. In all these cities, sea level rise will meet a tide of urbanization in the coming decades and set the scene for storms with ever-more catastrophic consequences. 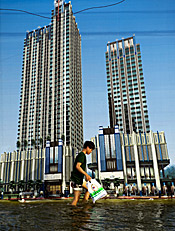 The flooding in Bangkok in 2011 was the worst in 50 years. SAEED KHAN/AFP/GETTY IMAGES

Some of those cities with the most at-risk assets now — Tokyo, New Orleans, Amsterdam, Rotterdam, and Nagoya — will, over the next 50 years, be surpassed by Calcutta, Shanghai, Mumbai, Tianjin, Bangkok, Ningbo, and Ho Chi Minh City, booming Asian coastal metropolitan areas where trillions of dollars in economic assets will be vulnerable. So will many millions of these cities’ residents, most of them poor and living in low-lying areas.

Just as banks grew “too big to fail,” over the next half-century these coastal megacities may grow “too big to flood.” But flood they will unless they dramatically revise their growth strategies and undertake major infrastructure projects designed to protect them from the dual threat of rising sea levels and intensifying storms, experts say.

Based on the conservative assumption that sea levels will rise by only 18 inches by 2070, the OECD finds that total assets vulnerable to flooding and storm surges of just 10 of these cities could account for some 9 percent of the world’s GDP. But many climate scientists and coastal experts note that sea level rise forecasts by groups such as the Intergovernmental Panel on Climate Change did not factor in the melting of the Greenland and Antarctic ice sheets. When they are taken into account, these experts say that global sea levels could well rise 3 to 6 feet this century, leaving scores of cities and massive amounts of economic infrastructure dangerously exposed.

“Even assuming that protection levels will be high in the future,” the study states, “the large exposure in terms of population and assets is likely to translate into regular city-scale disasters at a global scale.”

Many of the world’s fastest-growing coastal cities have little or no protection.

Guangzhou, for instance, now with at-risk assets of only $84 billion will, by 2070, have more than $3 trillion worth of exposure, only slightly less than that of an increasingly at-risk Miami, the study predicts. As these cities’ rapidly growing economies attract more migrants, many people will be forced to settle in surrounding low-lying lands at or even below sea level. Over the next 60 years, the flood-vulnerable population of Calcutta will grow from 1.9 to 14 million, of Guangzhou from 2.7 to 10.3 million, according to the OECD. Ho Chi Minh City’s storm-vulnerable population is projected to grow from 1.9 to 9.2 million, Miami’s from 2 to 4.8 million, and New York/Newark’s from 1.5 to 2.9 million.

Robert Nicholls, the coastal expert who was lead author of the 2007 OECD report and a recent update, says that while he was impressed with New York’s ability to recover from the recent superstorm, he believes the city still faces the same question as these other coastal megacities: With sea level steadily rising, how much longer can they leave their growing populations and increasingly valuable infrastructures with so little protection. He points out that New York City, protected to only a 1-in-100-year flood event, has a larger GDP than London, Shanghai, or Amsterdam, all of which are protected to a greater than 1-in-1,000 year flood. Flood gates and levees protect Shanghai, while a storm surge barrier in the Thames protects London. Huge tidal barriers are designed to protect Amsterdam and Rotterdam from 1-in-10,000-year floods.

Many of the fastest-growing coastal cities have little or no protection. And in many of these cities higher sea levels will be exacerbated by sinking coastlines — a geological process accelerated by pumping of groundwater from coastal aquifers. 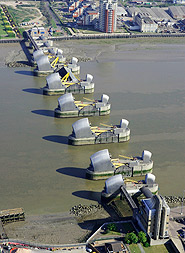 A storm surge barrier in the Thames has protected London since 1982. MIKE HEWITT/GETTY IMAGES

“If you’re going to live in these places you’re going to spend significant resources protecting your people and your assets,” says Nicholls, co-leader of the Cities and Coasts Research Program at the UK’s Tyndall Centre for Climate Change Research. “How long can you depend upon having the capacity to bounce back?”

Going beyond Nicholls’s projections, a 2011 report by the Asian Development Bank, World Bank, and the Japan International Cooperation Agency focused on the growing Asian coastal megacities and found that by mid-century, sea level rise, subsidence, and increased frequency and intensity of extreme weather events will pose “enormous adaptation challenges” to these already flood-prone cities.

A case in point: Ho Chi Minh City, a city of 8 million that now accounts for 23 percent of Vietnam’s GDP, will continue to attract industry and migrants. By 2050 its population could reach 20 million. As the city grows, its surrounding agricultural and forest land will decline, while its industrial zones expand. At the same time “warmer temperatures in the South China Sea are expected to increase the frequency of tropical storms and typhoons,” which will bring heavy rains and high storm surges, according to the Asian Development Bank (ADB) report.

“The landscape of vulnerability has changed spectacularly,” Vinod Thomas, director general of independent evaluation at the Asian Development Bank, said in an interview. In the last 30 years, he said, the number of major floods in the region has nearly quadrupled. Over this time, the ADB says, the Asia-Pacific region generated almost about 25 percent of the world’s gross domestic product, but also accounted for 38 percent of global economic losses due to natural disasters. Most of the large cities in the world classified as having extreme risks of climate vulnerability are in Asia, and by midcentury the region will face annual disaster losses in excess of $19 billion, the ADB says.

‘The landscape of vulnerability has changed spectacularly,’ says an Asia expert.

“The population exposure in urban centers will be breathtaking,” says Thomas.

Last year’s severe monsoon flooding in Bangkok was a stark demonstration of the economic assets that are increasingly at risk across the globe, and especially in Asia. In recent years, major industrial complexes have sprung up around Bangkok, producing everything from automobile parts to electronics; Thailand, for example, produces roughly a quarter of the world’s computer hard drives. Those industrial parks stand on what used to be rice paddies and wetlands, where floods, while they may have ruined a season’s crop, also fertilized the land.

Last year’s flooding, the heaviest in 50 years, put many of those industrial parks underwater, as fearful city Bangkok officials redirected floodwaters through canals around the capital and inundated populations and industrial zones surrounding the city. Chemicals, oil, and waste polluted the land and water. The flood, which cost the city some $4.65 billion and Thailand $45 billion, disrupted the global computer and automotive industries, especially the Japanese car sector, which had moved some of its operations to Japan following the Tohoku earthquake. Toyota, for instance, was forced to cancel overtime at its Japanese plants. The floods affected factories in Indonesia, Vietnam, and the Philippines.

Experts say the global ripples of the Thailand destruction are a sign of things to come if cities and nations do not begin planning for sea level rise and more powerful storm surges.

For example, in Manila, where 2009 floodwaters from tropical storm Ketsana rose up to 21 feet and inundated more than 80 percent of the city, the seasonal precipitation may increase as much as 4 percent by 2050. The result in economic terms? In Manila, the ADB report says, “the additional costs of sea level rise from a 1-in-30-year flood would be approximately… 6 percent of GDP” the ADB report says.

This, says Thomas, is the “great revelation” of worsening natural disasters: In these growing megacities, “storms are no longer an interruption to business as usual that you get over and move on from, but are a systemic risk to economic development.”

That these cities are becoming an increasingly important part of Asia’s and the world’s economies will only compound the effects of major floods. “What would happen if you had three Bangkoks in the same year?” Thomas asks. “How would it affect the supply chain, and how would it be dealt with?”

Flooded roads and infrastructure such as ports and airports, says Thomas, will have greater impacts as the economic links among these coastal cities become more complex. Thomas says a major paradox of this century is that we are concentrating more of the world’s wealth and population in vulnerable coastal areas, just as sea level rise and more powerful storms put them at greater risk.

Thomas points out that Asian Development Bank investments of some $10 billion over the last 15 years have produced important early storm warning systems in Bangladesh and extensive flood control projects in Pakistan and Indonesia that have saved thousands of lives. At the same time, the ADB recommends that Asian cities emphasize ecosystem solutions, such as preserving urban wetlands and mangroves.

New York City had been gradually preparing for a world of rising seas and more powerful storms. But the devastation caused by Hurricane Sandy, Bruce Stutz writes, is forcing officials to consider spending billions of dollars on storm protection, including a network of surge barriers.READ MORE

Thomas hopes that as a result of its recent studies of sea level risks, the Asian Development Bank will invest more in structural and environmental mitigation so that Asia’s future storm response and rehabilitation costs will decline. ADB estimates, for instance, that $1 billion in proposed adaptation measures for Bangkok, including improving waterways and pumping capacity, could reduce the extent of flooded areas by some 50 percent.

The OECD projects that some $35 trillion of the world’s assets will be at stake in these coastal cities by 2070, and the ADB warns that natural disasters that can derail economic growth and development are “becoming increasingly endemic.” And yet, says Nicholls, he’s found “a surprising resistance to looking at what can be done,” even among those most familiar with the problems.