For the past 15 years, scientists from Russia and other nations have ventured into the ice-bound and little-studied Arctic Ocean above Siberia to monitor the temperature and chemistry of the sea, including levels of methane, a potent greenhouse gas. Their scientific cruises on the shallow continental shelf occurred as sea ice in the Arctic Ocean was rapidly melting and as northern Siberia was earning the distinction — along with the North American Arctic and the western Antarctic Peninsula —of warming faster than any place on Earth.

Until 2003, concentrations of methane had remained relatively stable in the Arctic Ocean and the atmosphere north of Siberia. But then they began to rise. This summer, scientists taking part in the six-week International Siberian Shelf Study discovered numerous areas, spread over thousands of square miles, where large quantities of methane — a gas with 20-times the heat-trapping power of carbon dioxide — rose from the once-frozen seabed floor.

These “methane chimneys” sometimes contained concentrations of the gas 100 times higher than background levels and were so large that clouds of gas bubbles were detected “rising up through the water column,” Orjan Gustafsson of the Department of Applied Environmental Science at Stockholm University and the co-leader of the expedition, said in an interview. There was no doubt, he said, that the methane was coming from sub-sea permafrost, indicating that the sea bottom might be melting and freeing up this potent greenhouse gas.

Gustafsson said he makes no claims that the methane release “is necessarily driven by global warming.” But a growing body of data showing that more methane is emanating from the rapidly thawing Arctic Ocean has caught the attention of many climate scientists. Could this be the beginning, they wonder, of the release of vast quantities of sub-sea Arctic methane long trapped by a permafrost layer that is starting to thaw? 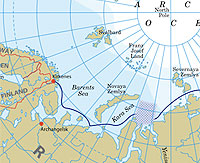 In recent years, climate scientists have been concerned about a so-called “methane time bomb” on land, which would be detonated when warming Arctic temperatures melt permafrost and cause frozen vegetation in peat bogs and other areas to decay, releasing methane and carbon dioxide. Now come fears of a methane time bomb, part two, this one bursting from the sea floor of the shallow Arctic continental shelf. The Arctic sea floor contains a rich, decayed layer of vegetation from earlier eras when the continental shelf was not underwater.

So little data is available from the Arctic Ocean that no scientists dare say with certainty whether the world is watching the fuse being lit on a marine methane time bomb. But researchers such as Natalia Shakhova —a visiting scientist at the University of Alaska in Fairbanks and a participant in some of the Siberian Shelf scientific cruises — are concerned that the undersea permafrost layer has become unstable and is leaking methane long locked in ice crystals, known as methane hydrates.

One thing is certain: the shallow Siberian Shelf alone covers more than 1.5 million square kilometers (580,000 square miles), an area larger than France, Germany, and Spain combined. Should its permafrost layer thaw, an amount of methane equal to 12 times the current level in the atmosphere could be released, according to Shakhova. Such a release would cause “catastrophic global warming,” she recently wrote in Geophysical Research Abstracts. Among the many unanswered questions is how quickly — over years? centuries? — methane releases might occur.

Now come fears of a methane time bomb, part two, this one bursting from the sea floor of the shallow Arctic continental shelf.

Said Gustafsson, “The conventional view is that the permafrost is holding these large methane reservoirs in place. That is a view that we need to rethink and revise.”

What concerns some scientists is evidence from past geological eras that sudden releases of methane have triggered runaway cycles of climate upheaval. Martin Kennedy, a geologist at the University of California at Riverside and lead author of a paper published in Nature in June, speaks in near-doomsday terms, warning that rising methane emissions — from land and sea — threaten to radically destabilize the climate. Ice core studies in Greenland and Antarctica have shown that Earth’s climate can change abruptly, more like flipping a switch than slowly turning a dial.

“I’m very concerned that we’re near the threshold and we’re going to see the tipping point in 20 years,” Kennedy warns. Temperature increases in the Arctic of a just few degrees could unleash the huge storehouse of methane, which some have estimated would be comparable to burning all recoverable stocks of coal, oil, and natural gas.

Kennedy’s Nature article bases his warnings on a long-ago event. Sediment samples gathered in south Australia led Kennedy’s team to theorize that a catastrophic era of global warming was triggered some 635 million years ago by a gradual — and then abrupt — release of methane from frozen soils, bringing an end to “Snowball Earth,” when the entire planet was encrusted in ice. He sees similarities in the mounting threats of thawing terrestrial and marine permafrost today. The question, he asks, is what will set the process in motion and when.

What concerns some scientists is evidence from past geological eras that sudden releases of methane have triggered runaway cycles of climate upheaval.

“Do we have a substantial risk of crossing one of these thresholds?” he asked in an interview. “I would say yes. I have absolutely no doubt that at the current rate of [greenhouse gas emissions] we can cross a tipping point, and when that occurs it’s too late to do anything about it.”

As with much climate research, the science is complex and opinions can vary dramatically. David Lawrence of the National Center for Atmospheric Research in Boulder, Colorado, is concerned, but not alarmed. Lawrence was lead author of a paper in Geophysical Research Letters, also published in June, that documented the consequences of the record loss of Arctic sea ice in 2007. Based on climate models, Lawrence and his team theorized that during periods of rapid sea-ice loss, temperatures could increase as far as 900 miles inland, accelerating the rate of terrestrial permafrost thaw. From August to October of 2007, they reported, temperatures over land in the western Arctic rose more than 4°F above the 1978-2006 average.

“If you give it [the land] a pulse of warming like that it could lead to increased degradation of permafrost,” Lawrence said in an interview. “It’s not quite a runaway situation, but it does accelerate once it starts to thaw and accumulates heat.”

Arctic soils hold nearly one-third of the world’s supply of carbon, remnants of an era when even the northern latitudes were covered with lush foliage and mammoths ranged over grassy steppes. Scientists estimate that the Siberian tundra contains as much buried organic matter as the world’s tropical rain forests.

Disappearing Arctic sea ice — summer ice extent was at its lowest level in recorded history in 2007 and almost hit that level in 2008 — also will warm the Arctic Ocean, since a dark, ice-free sea absorbs more solar radiation than a white, ice-covered one. In addition, warmer waters are pouring in from rivers in rapidly warming land regions of Alaska, Canada, and Russia, also increasing sea temperatures.

Rising ocean and air temperatures mean not only the continuing disappearance of Arctic sea ice — many scientists now think the Arctic Ocean could be ice-free in summer within two decades — but also mean that permafrost on the sea floor could thaw more quickly. Scientists are unsure how rapidly the subsurface permafrost is thawing, or the exact causes. One possible cause could be geothermal heat seeping through fault zones. In any case, scientists agree that Arctic sub-sea permafrost — with a temperature of 29°F to 30°F— is closer to thawing than terrestrial permafrost, whose temperature can drop as low as 9.5°F.

Scientists are stepping up their monitoring of the land and the sea in the Arctic.

At this point, scientists are stepping up their monitoring of the land and the sea in the Arctic, watching to see if either time bomb — terrestrial or marine — is showing signs of going off. So far, data are scarce and monitoring networks don’t exist. “That makes it very difficult to understand and evaluate the future,” Lawrence said. Although scientists know that methane has been released in the region’s water for eons, they are unsure if the new findings represent a short-term spike or long-term trend.

Pending more research, Orjan Gustafsson shares Lawrence’s caution. When he was asked how close Earth may be to a tipping point of irreversible climate change, he replied: “Everyone would like to know the answer to that. I don’t think anyone can say.”