Down a narrow dirt road at the Third Infantry Division’s home base of Fort Stewart, Georgia, Joe Veldman pulls into a sand-hill landscape covered with turkey oak, saw palmetto, and, most crucially, a healthy stand of longleaf pine.

At first glance, this hardscrabble ecosystem on one of the U.S. Army’s largest installations appears to have seen better days. But Veldman, a plant ecologist at the University of Wisconsin, politely demurs. “If every place in the Southeast were like this, we wouldn’t be doing any research,” he said. “This area is in good shape.”

From Virginia to Texas, the longleaf pine has seen its historical habitat reduced to a mere 3 percent of its original 92 million-acre range. Centuries of logging and farming have exacted a heavy toll on these ecosystems, and in recent decades the Southeast’s economic boom has led to large tracts of longleaf pine being razed for housing, malls, and office parks.

‘That the military keeps large chunks of intact land is a godsend for these ecosystems.’

As it turns out, however, military bases such as Fort Stewart have become a key refuge for longleaf pine. And now the U.S. Department of Defense is funding several independent, long-term studies on how to restore some of the pine’s ecosystems — one of the most biodiverse environments north of the tropics — to their former glory. Data gleaned from these studies will help the broader longleaf research community conduct longleaf restoration on government and private land across the Southeast; conservationists have set a 15-year goal of restoring the longleaf pine from its current 3.4 million acres to 8 million acres, or levels approaching 9 percent of its historical range.

“Longleaf pine habitat usually gets chopped down and paved,” said John Orrock, a conservation biologist at the University of Wisconsin and the Fort Stewart understory study’s onsite project leader. “That the military actually keeps large chunks of intact land is a godsend because the danger for these ecosystems is that they get developed into something like Walmart.”

Orrock and Veldman are a part of a $1.8 million study, involving some 25 researchers at three locations: Fort Stewart; Fort Bragg, North Carolina; and South Carolina’s Savannah River nuclear site. The study’s main goal is to understand how best to restore the longleaf’s diverse understory. 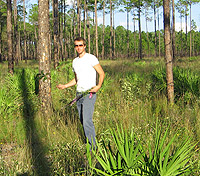 For its part, the military has found longleaf pine habitat ideal for troop maneuvers. “The openness of the longleaf pine and the thin stands provides visibility and maneuverability that is very consistent with what a mechanized force like the Third Infantry division likes to fight in,” said Tim Beaty, a U.S. Army wildlife biologist.

And while it may seem counter-intuitive, military bases have proven to be hospitable places for longleaf pine ecosystems. This ancient, fire-resistant species depends on random fires to thin the understory and rid itself of competitors, creating an unexpected synergy between live-ammunition maneuvers — which often lead to small blazes — and a thriving longleaf pine ecosystem.

“When it comes to longleaf pine management, the military is by far the best,” said John Kush, a forest ecologist at Auburn University.

In the early 19th century, vast expanses of longleaf pine stretched inland from the coasts of the Atlantic and Gulf of Mexico for hundreds of miles, creating a sense of unrelenting monotony. Travelers in Georgia reported a feeling of dread and loneliness upon entering seemingly endless stretches of this forest, where row upon row of tall, straight longleaf pines towered over an understory rife with astors, morning glories, rosemary, huckleberries, wax myrtle, winged sumac, and wiregrass. Deer, feral pigs, rattlesnakes, wild turkey, and bobwhite quail were found in abundance.

Today, some 66 percent of longleaf pine forest remains in private hands, primarily in southwest Georgia, the Florida panhandle, and south Alabama. Much of this land is being logged or farmed, although today a younger generation of owners is only too willing to sell their inheritance to developers.

Agriculture can spoil longleaf habitat for up to a century after cultivation.

The Alabama-based Longleaf Alliance — the nation’s oldest longleaf conservation group — is working to educate private owners about both the aesthetic and economic benefits of maintaining a longleaf ecosystem. Longleaf pine is still in high demand as timber, primarily for utility poles, and selective logging can preserve these ecosystems.

Rhett Johnson, a forest ecologist and the president of the Longleaf Alliance, said that restoring longleaf forests on former agricultural land is a major challenge, since plant seeds that once made up the ecosystem’s diverse understory have often disappeared. This is where the scientific work on military bases may be helpful, as Orrock and his colleagues are now studying how best to restore former farmland.

Almost half of Fort Stewart’s 279,270 acres lie in longleaf pine ecosystems; but before it became a military base some 70 years ago much of its acreage was either under cultivation or grazed. Orrock and his team have established 36 experimental sites at Fort Stewart alone and are placing an emphasis on how to restore the diverse understory found in pristine longleaf pine ecosystems. The team’s preliminary results indicate that agriculture can spoil longleaf habitat for decades — even a century — after cultivation. Restoration of former farmland, often now covered in loblolly pines, would likely require clear-cutting and starting from scratch.

“Our work shows that sites that were in agriculture many years ago still have much less diverse communities,” said Orrock. “The exciting part for us is whether or not these lasting effects of the past can be undone with our current experiments.”

The military base studies also are underscoring that in longleaf pine ecosystems, fires are as welcome as a healthy rain. Longleaf pine seedlings actually need fire to ensure the ecosystem maintains an open canopy, providing the young, shade-intolerant pines with sunlight. Without fire, broadleaf trees like sweetgum and water oak thrive and eventually cast the understory in permanent shade.

Joe Veldman noted the importance of fire as he drove me to research plots scattered around Fort Stewart. We headed along a two-lane blacktop that threads its way through thousands of acres of mixed woodland and Army live-fire ranges. Veldman stopped at an area known as sector E-22, not far from a Cold War-era mock enemy interrogation camp. Much of E-22 is an area of formerly cultivated farms, and the things growing there now — loblolly, jasmine, and wild vines of the muscadine grape — typically colonize old fields.

In longleaf pine ecosystems, fires are as welcome as a healthy rain.

Later, walking through a stand of longleaf pine, Veldman pointed to a nearby seedling that could be easily mistaken for an oversized clump of grass. Such young seedlings can remain within two feet of the surface for five years or more, then enter a phase where they can quickly spurt by as much as four to five feet per year. But as long as the seedling’s dominant growth bud is below or near the surface, Veldman explains, fires can burn right over it, leaving it unscathed. Mature longleaf pine, which have potential lifespans of 500 years or more, are relatively immune from the ravages of wildfire, since their thick bark offers them protection.

Orrock, Veldman, and their colleagues are testing the assumption that understory diversity is maintained by a longleaf pine ecosystem that thrives on frequent fire. “Within the span of one square meter,” said Orrick, “it’s exciting to see 30 to 40 different plant species in really pristine longleaf pine understories.”

From ground level, it’s clear why the military would like this type of landscape for training. There’s enough territory and tree cover for camouflage maneuvers, and during live-fire exercises there is ample room to maneuver tanks and Humvees in a park-like landscape. And if their ordnance happens to start a fire? So much the better.

Depending on drought conditions, as many as 200 wildfires per year are started by ordnance, smoke grenades, and signal or illumination flares. On average, these training-related fires consume no more than 2,000 acres per year, and most are allowed to burn out on their own, except when they present a significant safety danger due to smoke.

In addition to funding studies of longleaf pine restoration, the Department of Defense is readying itself for an era in which its military bases have to account for their carbon footprint. Longleaf pine ecosystems can help the military do that through carbon sequestration. Another five-year, military-funded study — led by Lisa Samuelson, an eco-physiologist at Auburn University — will focus on measuring carbon storage and ecosystem biomass at Camp Lejeune, North Carolina; Fort Polk, Louisiana; and Fort Benning, Georgia. The project’s ultimate goal is to help the Department of Defense develop a carbon sequestration plan.

The military is also charged with helping retain and restore threatened species on military bases. At Fort Stewart, these include the red-cockaded woodpecker and the gopher tortoise, which relies on the uncluttered understory of longleaf ecosystems to move through the landscape.

Even though aesthetics and endangered wildlife might seem to be the least of the Army’s worries, it’s hard not to be impressed when standing in the midst of such an ancient ecosystem. Near the end of a rutted fire road that disappeared into a longleaf horizon, Veldman and I stood and took it all in. The only sound was the lonely swoosh of wind in the pines. Standing there, it was easy to imagine these pines as they once were, ubiquitous and untouched.