The hydraulic fracturing of shale formations in the United States has led to a bonanza of natural gas production and a well-publicized drop in natural gas prices. But another, less-heralded development also is closely tied to the shale gas revolution — the rapid growth of chemical plants and manufacturing facilities that use cheap natural gas to produce key ingredients found in everything from plastics to fertilizer to liquid fuels.

“Plants use natural gas like a bakery shop uses flour,” said Dan Borne, president of the Louisiana Chemical Association. “All this stuff starts with natural gas, our basic feedstock, our daily bread.” 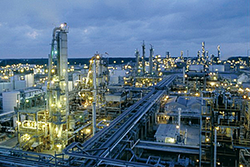 This boom is being felt across the U.S., and nowhere more so than the 80-mile stretch of the Mississippi River between New Orleans and Baton Rouge, Louisiana. There, more than 150 petrochemical facilities and refineries already sit shoulder-to-shoulder, emitting a wide range of pollutants and leading to the high cancer rates that have earned the region the nickname “Cancer Alley.”

Now, a new wave of chemical plants — including what will likely be the largest industrial project the state has ever seen — is coming to this part of Louisiana as a result of the fracking boom. This jump in industrialization, both in Louisiana and elsewhere, is raising fears among residents, scientists, and environmentalists that regions already bearing a significant pollution burden will now be facing rising emissions from new factories using natural gas as a feedstock.

“There are a lot of these facilities that are being developed just because there’s an abundance of cheap natural gas,” said Wilma Subra, a chemist with the Louisiana Environmental Action Network who has for decades worked with communities impacted by industrial pollution. “Once they start operating, it’s a huge burden from the chemicals being released into the air and water in these communities.”

The nonprofit Environmental Integrity Project released a report in December detailing the impacts of this industrial boom not only on levels of pollution but also on greenhouse gas emissions. It found that over the last three years, the U.S. Environmental Protection Agency and state agencies have issued draft or final permits to build or expand 105 oil, gas, or chemical plants that will all use shale gas or oil as a feedstock. Another 15 applications are pending. These 120 projects would boost U.S. greenhouse gas emissions by more than 130 million tons a year — the equivalent of as many as 28 coal-fired power plants, according to the report.

Illinois-based CF Industries is expanding fertilizer plants in Louisiana and Iowa, and CHS Inc. is building a $3 billion fertilizer plant in North Dakota using natural gas as its main feedstock. In Philadelphia, business interests, unions, and politicians have embarked on a “re-industrialization” of the city’s waterfront that will rely on new pipelines transporting natural gas from the Marcellus Shale region to manufacturing and refining facilities along the Delaware River.

Maya van Rossum, the Delaware Riverkeeper and head of the Delaware Riverkeeper Network, is concerned about the environmental and health effects of this boom. “The threat of air and water pollution from manufacturing that uses natural gas as a feedstock is very clear in Philadelphia, where pre-existing manufacturing and processing infrastructure is being transformed into quick service for shale gas without thorough analysis of the environmental and community impacts,” van Rossum said in an email.

In western Pennsylvania, Shell has proposed an “ethane cracker,” a plant that breaks — or cracks — ethane, found in natural gas, to produce ethylene, which is used in many products, from plastic bags to cosmetics to detergent. Northwest Innovation Works, a corporate partnership with major funding from China, has proposed two large-scale methanol plants using natural gas as a feedstock in Oregon and Washington, which would then ship the methanol to China for likely conversion to ethylene or propylene.

But the bulk of the construction continues to be centered in Louisiana and Texas, where industrial facilities already dominate the Gulf of Mexico coastline and the banks of the Mississippi River. Drive through Ascension or Calcasieu parishes in Louisiana and you see plant after plant with countless pipes and air stacks releasing vapors and odors into the atmosphere.

Business interests in Louisiana and elsewhere are calling this industrial shift a renaissance that will help revive local economies. Industry officials, as well as state regulators, also say that the new plants going up as a result of the natural gas boom will be well regulated and operate in an environmentally responsible manner.

Borne, of the Louisiana Chemical Association, said the industry operates “well within permitted environmental, health, and safety standards.” He added in an email, “I see the lengths to which our plants go to make sure everything they do is transparent and how the public is engaged in hearings that accompany the permitting process. In short, if I thought living along the ‘Ruhr of America’ was hurting my health, I’d been out of here decades ago.”

But Subra and environmental and public health groups say that this expanding industry has been allowed to operate with weak regulatory scrutiny. These critics contend that pollutants released by such clusters of industrial facilities have already contaminated local air and water supplies and taken a heavy toll on public health. Researchers have found benzene in the air, ethylene dichloride in groundwater, and high dioxin levels in the blood of residents of “Cancer Alley.” These are all chemicals that are known or probable carcinogens, and toxic to health in other ways as well.

Cancer rates are high and asthma rates are through the roof, according to the local nonprofit Louisiana Bucket Brigade and others who have examined health trends in the area.

Critics say the new facilities are going up with great cost to the same communities because in most cases, the more concentrated these pollutants become — and the more they are able to mix with each other in the environment — the more toxic they are. The impacts of adding more contaminants to an already-toxic mix is not a matter of simple addition, according to Subra and others. The pollutants have a compound effect and are cumulative.

“You’re not being exposed to one chemical, you’re being exposed to a whole host of them,” said Subra. “You don’t add them together and say, `Well this is the impact.’ It’s more than just additive.”

Area residents are worried about the impacts of the new Sasol chemical plant in Lake Charles, Louisiana.

The big project underway in Louisiana, run by South Africa-based Sasol, will house an $8 billion “ethane cracker.” The company also had planned to build a $14 billion gas-to-liquids facility in Louisiana that would turn natural gas into diesel fuel. But those plans were put on hold this month as falling oil prices have undermined the economics of the project.

Sasol recently built the world’s first commercial “ethylene tetramerization unit,” in Lake Charles, Louisiana, which converts ethylene to chemicals that are used to strengthen some plastics. The company has bought out about half the residents living in one community near the Lake Charles plant, according to Monique Harden, an attorney and co-director of the New Orleans-based Advocates for Environmental Human Rights. But residents still living in the area are worried about the impacts of the Sasol plant in addition to the industry that’s already there.

Harden is concerned that agencies won’t even know how to regulate the proposed Sasol gas-to-liquids facility because it will be the first one of its size in the country, and only a handful exist worldwide. “We’re talking about a whole new kind of technology of taking fracked gas and synthetically converting it into liquid fuel,” said Harden. “There’s a reason why these gas-to-liquid facilities are in these parts of the planet, and not in London or California or someplace where there’s an understanding of public participation, democracy, public health.”

Bryan Johnston, an environmental scientist in the air permits division at the Louisiana Department of Environmental Quality (LDEQ), said that while the specific operation is new, the agency has plenty of experience with the chemicals involved. “The inputs and the outputs, those are all well-known and defined compounds that are regulated by the state and federal government,” he said. “We know what’s going in, we know what’s going out the stacks. That’s what we need to ensure that the permit’s protective.”

The region is already home to most of the country’s large ethane crackers, the facilities that turn ethane into ethylene. According to the Environmental Protection Agency’s Toxics Release Inventory, a self-reported database, in 2013 the Williams Olefins plant outside Baton Rouge released, among other chemicals, more than 14,000 pounds of benzene, 3,000 pounds of 1,3-butadiene (a colorless gas commonly found in motor vehicle exhaust and a carcinogen), and 148,000 pounds of ethylene into the environment. With the exception of ethylene, these chemicals released by the Williams Olefins plant are volatile organic compounds, or VOCs, which can cause health problems, including liver and kidney damage and possibly cancer. VOCs are also a main contributor to smog, which is comprised largely of ground-level ozone.

An effort in Philadelphia would convert the Delaware riverfront into an industrial center relying on natural gas.

Two years ago, as a result of cheaper natural gas prices, Dow Chemical restarted an ethylene plant that had been idled for four years near Hahnville, Louisiana. Dow also has announced plans for a new ethylene production facility in Texas. Other companies are building plants to make ammonia, methanol, latex paints, and water-based coatings, all using natural gas as a feedstock.

In and around Philadelphia, a major effort is underway to convert active or idle industrial infrastructure along the Delaware River into a processing and manufacturing center that will rely heavily on piped-in natural gas from the Marcellus Shale region. A large petroleum products refiner, Philadelphia Energy Solutions, is turning part of its South Philadelphia facility into a shale oil processing hub. Sunoco Logistics is converting an existing petroleum pipeline to carry natural gas liquids from shale fields in southwestern Pennsylvania to a refining site near Philadelphia.

Van Rossum, the Delaware Riverkeeper, said these developments are occurring in an area whose surrounding neighborhoods already have substandard air quality and related health effects. And she said that developing the region’s riverfront as a shale gas hub is a continuation of the same old boom-and-bust resource cycles of the past; some analysts predict that Marcellus shale gas production could peak by 2040 or sooner.

“A Red Dirt Town” examines the legacy of pollution in Anniston, Alabama, the former home of a Monsanto chemical factory. Produced by Spenser Gabin, the video tells the story of how PCBs contaminated the town’s waterways and continue to taint the fish that are popular with local anglers.READ MORE

Van Rossum said it makes more sense to transform the Philadelphia-area riverfront into a center of renewable energy investment. “If Philadelphia were to consider repurposing its resources for clean energy investments and riverfront enhancements, it would get the job and economic values of an energy industry on the rise — and the economic values and enhancements that healthy riverfront lands are known to provide,” said van Rossum.

Robert Kapp, a toxicologist with BioTox, a New Jersey-based consulting company specializing in regulatory compliance and risk assessments for toxic chemicals, said that many of the chemicals and compounds released by these plants are carcinogens and can alter DNA in cells. But, he emphasized, it’s the dose that matters; even a toxic chemical like benzene isn’t necessarily harmful in a small dose over a short time. He said that sunlight, bacteria, and other natural forces also can help dilute or break down some of these hazardous substances.

Frank Ackerman, an environmental economist with Synapse Energy Economics in Massachusetts, thinks it’s possible for the chemical industry to operate and expand in a sustainable manner — but that hasn’t been a priority. “In general, the cost of producing things cleanly has not been shown to be that high,” said Ackerman. “Industry has routinely complained that they were going to be bankrupted by environmental regulations, which they turned out to be able to live with.”