Outsiders have long viewed Canada as a pristine wilderness destination replete with moose, mountains, and Mounties who always got their man. Recognizing the tourism value of that somewhat dull but wholesome image, successive Canadian governments — both Liberal and Conservative — were content to promote the stereotype in brochures, magazine advertisements, and TV commercials.

The lie of that was evident in the rampant clear-cutting of forests in British Columbia, the gargantuan oil sands developments in Alberta, the toxic mining practices in the Arctic, and the factory fishing that literally wiped out the Canadian cod industry by the 1990s. But this wholesome image endured because progress was made on several environmental fronts, such as creation of many new national parks, and because Canada remains sparsely populated with large swaths of unspoiled boreal forest and tundra.

But Canada’s pristine image — and more importantly its environment — is not likely to recover from what critics across the political spectrum say is an unprecedented assault by the Conservative government of Prime Minister Stephen Harper on environmental regulation, oversight, and scientific research. Harper, who came to power in 2006 unapologetic for once describing the Kyoto climate accords as “essentially a socialist scheme to suck money out of wealth-producing nations,” has steadily been weakening environmental enforcement, monitoring, and research, while at the same time boosting controversial tar sands development, backing major pipeline construction, and increasing energy industry subsidies.

Critics say that assault reached a crescendo in recent weeks with the passage in Parliament of an omnibus budget bill known as C-38, which guts or significantly weakens rules relating to fisheries protection, environmental assessment, endangered species, and national parks. Under this bill, the criteria that currently trigger environmental

assessments, for example, have been eliminated, leaving such reviews more to the discretion of the Minister of the Environment and other political appointees. The Fisheries Act will no longer be focused on habitat protection; instead, it will restrict itself largely to the commercial aspects of resource harvesting. Ocean dumping rules will also be changed to allow the Minister of the Environment to make decisions on permitting. And Parks Canada will no longer have to conduct environmental audits or review management plans every ten years. In addition, budgets cuts will eliminate the jobs of hundreds of scientists working for various government departments that focus on the environment and wildlife.

The bill also formally ends Canada’s commitment to the Kyoto Protocol and removes funding for the bipartisan National Round Table on the Economy and the Environment, which for a quarter-century has offered policy solutions on how to grow Canada’s environment in a sustainable way.

One would expect intense criticism of Harper’s policies from environmentalists. But in recent months, hundreds of scientists, at least one university president, and several former Cabinet ministers and politicians — including three from the Conservative Party — have weighed in with scathing attacks on the Harper government.

“We have had lengthy and varied political experience and collectively have served in cabinet in Progressive Conservative and Liberal governments alike,” former fisheries ministers Tom Siddon, David Anderson, John Fraser, and Herb Dhaliwal said in an open letter to Harper on June 1. “We believe we have a fair understanding of the views of Canadians. Moreover, we believe there is genuine public concern over the perceived threat this legislation poses to the health of Canada’s environment and in particular to the well being of its fisheries resources. We are especially alarmed about any possible diminution of the statutory protection of fish habitat, which we feel could result if the provisions of Bill C-38 are brought into force.”

The discontent, however, goes much deeper than that. In addition to Bill C-38, the Harper government has ended funding for the Canadian Foundation for Climate and Atmospheric Sciences, which had doled out

‘This government is not going to let anything get in the way of resource development,’ says one scientist.

more than $100 million in research funding over the past decade. It has withdrawn support for the Experimental Lakes Program in northwestern Ontario, which has used 58 lakes to conduct groundbreaking studies on phosphate, mercury, and bacterial contamination, as well as research on how climate change affects freshwater systems. And it has killed funding for a program that helps keep more than a dozen Arctic science research stations operational.

The elimination or severe reduction of funds for research into climate change and the Arctic has especially serious implications, given that the Canadian Arctic is warming faster than almost any other region on earth. Scientists say that Harper’s sharp cutbacks will mean a drastic shortage of funds to monitor huge environmental changes in the Arctic, including melting sea ice, thawing permafrost, a rapidly changing tundra environment, and widespread impacts on fauna and flora.

“The kindest thing I can say is that these people don’t know enough about science to know the value of what they are cutting and doing,” says David Schindler, co-founder of the Experimental Lakes Project and one of the world’s best-known freshwater scientists. “But I think it goes deeper than that. This government is not going to let anything get in the way of resource development.” 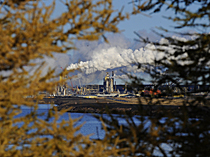 Mark Ralston/AFP/Getty Images
A tar sands extraction facility near the town of Fort McMurray in Alberta.
Many think that statement goes to the heart of the matter now that international controversy over the Alberta tar sands and the Keystone XL Pipeline — which would carry that oil across the U.S. to Texas refineries — have put the Canadian government on the defensive. How else, they say, do you account for Natural Resources Minister Joe Oliver writing an open letter last January claiming that “environmental and other radical groups” use “funding from foreign special interest groups to undermine Canada’s national economic interest” — an apparent allusion to international opposition to the Alberta tar sands and related pipeline projects. What else, they add, could be behind the government’s decision this spring to give the Canada Revenue Agency an extra $8 million to crack down on environmental charities?

Justifying the tax crackdown, Harper said recently, “If it’s the case that we’re spending on organizations that are doing things contrary to government policy, I think that is an inappropriate use of taxpayers’ money and we’ll look to eliminate it.”

Tides Canada is one of the charities at the center of this particular controversy. When the Harper government recently accused it of funneling foreign money to advocacy groups that oppose the Keystone pipeline and the Gateway pipeline (which would carry tar sands oil to ports in British Columbia), the head of the organization took the unprecedented step of releasing a detailed account of its grant recipients and international donors.

As it turns out, The Gordon and Betty Moore Foundation — established by Intel co-founded Gordon Moore — is among its biggest U.S. donors. It gave Tides an $8 million grant to support marine planning and science in British Columbia and nearly $10 million for salmon conservation initiatives. Tides Canada also got $2.4 million from several American foundations that wanted the money to support a land-use agreement between aboriginal groups and the province of British Columbia.

Ross McMillan, president and CEO of Tides Canada, denies that his charity is involved in political activity. The decision to go public, he says, was designed to “send a clear message to our critics that we have nothing to hide

Harper has muzzled government scientists conducting research on everything from permafrost to polar bears.

Harper hasn’t helped his cause by muzzling government scientists who have been conducting research on everything from permafrost to polar bears. Timely access to these scientists has been the subject of several newspaper articles and editorials. Hoping to resolve the long-standing problem, the Canadian Science Writers Association sent a letter to the Prime Minister in February calling on him to “tear down the wall that separates scientists, journalists, and the public.”

In the letter they noted how government scientists such as David Tarasick and Kristina Miller were prohibited from speaking to journalists even though their separate studies on the ozone layer and declining salmon populations were published in the journals Nature and Science.

The letter made little impression on the government. When 2,500 scientists, aboriginal leaders, and decision makers attended the International Polar Year Conference in Montreal in April, Canadian scientists were reminded not to talk to the media even though the government of Canada was the primary sponsor of the conference.

In June, former Conservative Member of Parliament Bob Mills took the extraordinary step of holding a press conference with the Green Party criticizing the government for killing the National Round Table on the Economy and the Environment, established in 1988 by former Conservative Prime Minister Brian Mulroney.

Environment Minister Peter Kent, a former journalist, claims that the Round Table had outlived its usefulness.

A surge in gas and oil drilling in the U.S. is helping drive the economic recovery and is enhancing energy security. But as the situation in Ohio shows, Keith Schneider writes, cheaper energy prices and the focus on fossil fuels has been bad news for the renewable energy industry.
READ MORE
Melissa Gorrie, a staff lawyer for the environmental law group Ecojustice, marvels at the persistence with which the Harper government is pressing ahead with its assault on the environment. She knows because she and her colleagues have successfully gone to the Federal Court of Canada several times to get the government to use emergency measures under the Species at Risk Act to protect declining caribou and sage grouse populations.

With each victory, the government has found a way not to act on the court order. Much of the stalling comes from procedural wrangling and disagreements about what constitutes an “imminent threat.” In the case of caribou, when all else failed the government came up with a draft recovery plan that satisfies none of the complainants nor any of the scientists who have been studying caribou for the past quarter-century.

“My colleagues and I have been talking about this quite a lot lately,” said Gorrie. “It’s either a vendetta and a total assault on the anything environmental or a total disinterest in the issue. Whatever it is, I don’t think we’ve seen anything quite like this in Canada.”