This spring, curiosity propelled me onto a New York City subway bound for Prospect Park West in Brooklyn, where a new bike path along the edge of Brooklyn’s largest park had angry residents worked up into a lather.

For those not familiar with the territory, Park Slope is one of New York City’s most prosperous and progressive neighborhoods, home to the famed Park Slope Food Cooperative and liberal U.S. Senator Charles Schumer. And yet… the creation of a simple green bike path — the kind that edges dozens of streets in Barcelona or Paris or Copenhagen — at the expense of one lane of car traffic and a few parking spaces evinced the kind of venom normally reserved here for The Tea Party.

In Copenhagen, 37 percent of commuters now use bikes to get to school or work.

I expected to find a diversity of opinion about the bike path, which was created last year by Mayor Michael Bloomberg. I did not. Almost everyoneI interviewed began with the following introduction: “Don’t get me wrong I love bikes, I ride all the time…” and then segued into a barrage of objections: The path was a hazard for old people and mothers with baby strollers crossing to enter the park. Riders pedaled too fast. They should just ride inside the park. The loss of a lane made parking worse and traffic slower. It made it harder to stop to drop kids at school. It was unsightly.

I had spent much time over the last five years in Europe, where cyclists and bike lanes have become part of nearly every urban streetscape. If you are a European mayor, running a good bike-sharing program seems as much a barometer of success as having a good school system.

In Copenhagen, 37 percent of commuters now use bikes to get to school or work — a number that dips only slightly in the dead of winter. Sure, cities like Amsterdam and Copenhagen have something of a bicycling tradition — certainly far more of one than in car-centric U.S. cities. But Europe’s bicycling enthusiasm extends to cities like Barcelona and Paris, with no cycling history. Even Rome has a bike-sharing program, though that city is supremely unsuited to travel on two wheels: Its roads are too narrow, its drivers mad, and its streets are paved with a kind of cobblestone that makes every meter a jarring experience. 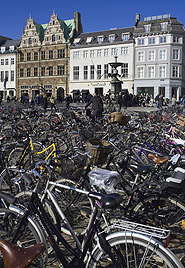 In comparison to these cities, major United States metropolises are bicycle deserts. When we talk about “bike friendly” cities in the United States, most are mere college towns and none boast more than 6 per cent bike commuters. According to the United States Census Bureau’s 2009 community survey, 76 percent of Americans drive to work alone in their cars each day, while only 0.6 percent arrive by bicycle.

What’s going on here? One key component that has enabled Europe’s successful bike revolution, I think, is not infrastructure, but sociology: While Americans still view bicycling as a form of exercise or recreation, a tectonic shift in attitudes has taken place in many parts of Europe, where people now regard bicycling as a serious form of urban mass transportation.

Last month, The Atlantic did an interesting survey of the top bike commuting towns in the U.S. They are Eugene, Oregon (5.6 percent of people commute by bike), Fort Collins, Colorado (5.2 percent), Missoula, Montana (4.8 percent), Boulder, Colorado (4.77 percent), and Santa Barbara, California (3.74 percent). The pictures that accompanied the survey were telling: bike riders with surfboards, riders with backpacks, and even riders traversing an empty forest. Students. Students. Students. A good portion of the bikes have drop handlebars, and many of the riders are wearing racing gear.

“There is more to making a city bike friendly than creating pathways — part of that is changing attitudes.

Now look at photos of bike riders in Paris or Copenhagen or Barcelona or Marseilles. They are men and women of all ages, in suits and dresses, fur coats and heels. They are riding sensible bikes. These are not sporting types, but a typical cross section of Europe’s working population, people going to the office on the vehicle that works well in their city.

There is more to making a city bike friendly than creating pathways, and part of that is changing attitudes: “In New York, there are lots of bike lanes, but not too many people on bicycles, so cars still think they own the road,” said Peder Jensen, head of the transport section at the European Environment Agency.

For the last several years, sociologists at Lancaster University have been studying the factors that keep people off two wheels in Britain, where biking has been relatively slow to catch on compared to other European countries, despite large government investment. Their diagnosis is similar: “Many people barely recognize the bicycle as a legitimate mode of transport; it is either a toy for children or a vehicle fit only for the poor and/or strange,” wrote Dave Horton, lead researcher of the Understanding Walking and Cycling study.

That also helps explain why bicycle commuting is expanding only slowly in U.S. cities — 3.0 percent of commuters in San Francisco and 2.2 percent in Philadelphia and Washington D.C, according to United States Census Bureau 2009 data.

New York has some state-of-the-art bike paths, but commuters aren’t using them much.

In New York it remains at 0.6 percent. Mayor Bloomberg has built us New Yorkers some really nice state-of-the art bike paths, but rank-and-file commuters aren’t much using them. Even at rush hour, the new bike path on Columbus Avenue near my home is a sparsely populated chute predominantly used by 20-somethings, bike messengers, and restaurant deliverymen.

Until we start thinking of bikes as essential transportation and not just a hobby, all the small changes that will allow working people to commute along those beautiful bike paths won’t happen.

Take me as an example: On paper, I should be riding to work. I live just blocks from a bike path along the Hudson River which would let me off at West 42nd Street, just blocks from my office.

But my apartment building sequesters bikes on high wall hooks in a basement storage room. That may be fine for a weekend ride in Central Park, but not readily accessible for daily use in work dress. On the bike path, many riders travel hunched over handlebars at death defying speeds. Could I ride here to the office — upright, slowly, and sweat-less? And then where would I park my “vehicle” once I got to work? There is nowhere convenient. So instead I take the subway.

The 2010 interim report of the Understanding Walking and Cycling study noted that “Walking and cycling are often thought of as simple forms of travel which require little equipment or planning. In fact this is not the case.” In truly bike friendly cities, the needs of bicycle commuters are taken seriously: The terminal stations in Bogota’s bus rapid transit lines have plentiful indoor bicycle parking. In Copenhagen, the European Environment Agency has 150 parking spots for bikes.

Bogota’s former mayor, Enrique Penalosa, once told me that when he unveiled that city’s new Bus Rapid Transit System one of the biggest challenges was to “rebrand” bus travel so that upper middle class people would use it. When Zurich wanted to encourage more people to ride bikes to work, its ad campaign pictured a banker in a 3-piece suit with a bicycle clip affixed to his trouser leg.

But to follow this model, bike paths must be tailored to suit commuters, not hot shots. On Copenhagen’s bike highways into the city, lights are synchronized at about 12 miles per hour. On Beijing’s bike lanes the hordes of bike riders travel — fender to fender — at an even slower pace. If bicycling was rebranded and refocused as essential mass transportation, I think some of the objections I heard from the residents of Park Slope this spring would disappear as well. They wanted bicyclists to ride inside the park because they viewed them as sportsman who want to ride fast. Middle-aged professionals on clunky bikes don’t mow down the elderly or babies in strollers.