Illegal online trafficking in imperiled wildlife is rampant, and attempted controls are few and largely ineffective. Log onto most any international Internet store that deals in wildlife or wildlife parts, and you’ll find a charnel house of endangered and protected species hawked openly or under phony names and in violation of U.S. law and international agreements. 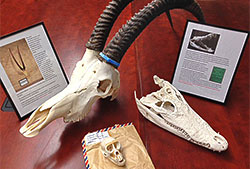 Skulls of a sable antelope, monkey, and Siamese crocodile that were purchased on eBay. PENINSULA HUMANE SOCIETY & SPCA

The world’s largest online marketplace by far, eBay, is one of the few that makes a serious effort to control wildlife smuggling by deleting ads for illegal products — but only the few it notices or hears about. Chris Nagano of the U.S. Fish and Wildlife Service’s Endangered Species Division is a trained lepidopterist. When I asked him if he sees any ads for illegal butterflies on eBay he replied: “There are a number of imperiled butterflies openly advertised on eBay, including some listed under the Endangered Species Act or protected under laws of countries they inhabit. Some of these species are sold to collectors for hundreds or even thousands of dollars.”

Ivory products are the most popular wildlife items on Internet markets, despite a global ban on ivory sales imposed by the 180-nation Convention on International Trade in Endangered Species (CITES). The National Academy of Sciences, a body of scholars established by the U.S. Congress, estimates that 100,000 elephants were killed by poachers between 2010 and 2012, mostly to sate ivory demand of China’s newly-moneyed middle class. At that unsustainable rate elephants are likely to be extinct in the wild within two decades.

In less than ten minutes, I found what looked like five ivory trinkets on eBay.

In less than ten minutes I found what looked like five ivory trinkets on eBay. When I reported them to Ryan Moore, eBay’s senior manager of global corporate affairs, four were confirmed and immediately deleted. A week later I told him about an ad for the critically endangered, globally protected Queen Alexandra’s birdwing, the world’s largest butterfly with wings sometimes spanning a foot and males aglow with iridescent yellows, blues and greens — the holy grail of collectors. Next day the ad was gone.

But such deletions scarcely make a dent. And although eBay has installed filters to catch words like “ivory,” smugglers dance around them. First, they called ivory “fauxivory.” When filters caught that ruse, smugglers called ivory “ox bone” — until filters picked up that, too. Each time eBay programs an alias into its filters another pops up. In the apt analogy of the company’s regulations and policy boss, Wolfgang Weber, kicking wildlife smugglers off eBay’s international sites is like playing the game “Whack-a-Mole.”

Private citizens like me — and even large NGOs — are hampered in our investigations because we can only flag what’s illegal or looks that way. We can’t procure hard evidence by buying the actual contraband because we’d be violating national and international laws. Not so with retired U.S. Fish and Wildlife Service special agent Ken McCloud.

Before he left the service in 2007, McCloud was in charge of all eBay investigations for the agency’s eight regions. In 2011 he took on an assignment for his then-employer — the Burlingame, California-based Peninsula Humane Society & SPCA, which is not your typical humane outfit in that it is wildlife-savvy. McCloud got permission from his former Office of Law Enforcement colleagues to buy wildlife contraband on eBay.

The sellers would say, ‘Don’t worry. We do this all the time. We’ve got contacts with Customs.’

“I just started ordering illegal items offered overseas that eBay had already warned sellers about,” he says. “I’d write the sellers through eBay and say, ‘Is this illegal and are we gonna get in trouble for it?’ They’d write back and say, ‘Don’t worry; we do this all the time. We’ve got contacts with [U.S.] Customs.’ The correspondence was juicy and blatant. When I used to go undercover to work our educated U.S. poachers and smugglers, it would take me at least a month to get them to trust me. These guys on eBay would open up the second I showed any concern. They’d give me examples of how they paid people off. Everything I bought came in falsely labeled.”

When eBay officials came to Burlingame in 2011 to view the enormous display of eBay contraband McCloud and Peninsula Humane Society & SPCA president Ken White had set up in a conference room, they were “blown away and horrified,” to borrow White’s words. “It looked like a black-market silent auction,” as one of White’s staffers put it. Soon thereafter eBay flew McCloud to its Salt Lake City, Utah, office for a day to teach screeners wildlife identification.

Until last May, McCloud was sending eBay pages-long lists of contraband he and his volunteers found advertised on its sites, along with the specific laws being violated. Here are four examples of thousands:

As McCloud’s listings of illegal ads poured in, eBay deleted many of them. But filter dodging continued.

Ken White describes eBay as “a good company with a desire to do right,” but one that still offers “a tremendous amount of illegal animal products.” White and McCloud weren’t interested in doing a sting. They wanted to work with, not against, eBay; and for a brief time they did. The company even provided modest funding; but White says he needed lots more.

“As far as we ever heard from eBay they were thrilled with how we were helping make their marketplace better,” says White. “But they wouldn’t allow us to talk about the problem through the media or even through grant requests for the financial support we believed was available. We’re a large humane society with a $13 million operating budget, but that’s nothing in their world. So we ran out of money and had to shut down the program.

After a report found 4,304 ivory links on eBay, the company banned ivory sales from its international sites.

“This was an opportunity for a huge corporation to set an example. But eBay was unwilling to allow us to tell the story. Not only am I disappointed that they pulled the plug on our program but that it didn’t become a model for the way corporate America can work with environmental and animal welfare organizations.”

When I asked eBay’s senior manager for global regulation, Mike Rou, for a response, he referred me back to White.

Internet traffic in wildlife was accelerating the extinction process even a decade ago. In 2004 the International Fund for Animal Welfare (IFAW) launched an investigation called “Caught in the Web” that documented massive online marketing of live endangered and protected species and their parts including elephants, rhinos, sea turtles, tigers, lions, falcons, gorillas, parrots, and serval cats.

Three years later, another IFAW investigation, “Bidding for Extinction,” focused on eBay sites in the U.K., U.S., Australia, Canada, Netherlands, Germany, France, and China. IFAW reported that “of those [2,275] items we investigated, more than 90 percent breached the stated ivory listing policies of the respective eBay websites.”

Any U.S. business that helps sell wildlife or wildlife parts unlawfully obtained from any nation (or in the U.S. and transported between states, if the value is at least $350) can be prosecuted for felony violation of the Lacey Act. This fact and all the bad press provided by yet another IFAW investigation in 2008 were apparently not lost on eBay. That investigation, “Killing with Keystrokes,” revealed that of 5,159 elephant ivory listings on 7,122 online links in eight countries, 4,304 were offered by eBay. Almost simultaneously with the report’s release, the company banned ivory sale from its international sites.

The U.S. Fish and Wildlife Service doesn’t have a cyber crimes unit, but IFAW’s findings inspired it to launch undercover stings in 2011 and 2012 called respectively Operation Cyberwild and Operation Wild Web.

In the second and more ambitious sting, agents from the service, 16 U.S. states, Singapore, Thailand, and Indonesia hit the Internet hard for two weeks. They didn’t pay much attention to eBay because it had made an effort to police itself. They focused instead on other sites like Etsy (apparently getting a reaction because Etsy followed eBay’s good example in 2013). Nor did they pay much attention to ivory because lobbying by big-game hunting interests, most notably Safari Club International, has riddled U.S. ivory laws with so many loopholes they’re nearly impossible to understand, let alone enforce.

The team didn’t go after the sites themselves. Instead, it targeted traffickers, making 154 busts. Crimes included selling everything from skins of tiger, leopard, and jaguar to whale teeth, walrus tusks, elephant ivory, dangerous invasive fish like piranhas, walking catfish, and live snakes and migratory birds.

The team knew it wouldn’t catch any big-time smugglers, but it also knew the power of publicity and how to work the media. Everyone cited was prosecuted amid a blizzard of press releases and smartly maestroed media feeding frenzies.

For a while traffickers got the message. Forty-eight hours after Operation Wild Web shut down, it had been mentioned 335 million times on the Internet.

The State of Florida, an enthusiastic participant in Operation Wild Web and with a cyber crimes unit, liked the sting so much that it does repeats about every eight months.

The ban on ivory imposed by eBay has had mixed results. In 2013, IFAW found that ads for endangered wildlife products in Australia, most on eBay, had increased 266 percent since 2008. A year later it documented a 48-percent increase in apparent ivory items offered by eBay in the U.K. On the other hand, IFAW’s team leader for wildlife cyber crime, Tania McCrea-Steele, told me this: “The ivory ban is working well on eBay sites based in Canada, Germany, France, Belgium, and the Netherlands.”

That progress doesn’t amount to much globally, and such voluntary measures clearly aren’t a solution. Last year IFAW looked at 280 online markets across 16 countries. In just six weeks it found ads for 33,006 endangered animals and their parts. About one-third were for elephant ivory.

Conservation groups are mounting campaigns to persuade Vietnamese consumers that buying rhino horn is decidedly uncool. But such efforts are likely to succeed only as part of a broader initiative to crack down on an illicit trade that is decimating African rhino populations.
READ MORE

So what is the solution? Regional field offices of the Fish and Wildlife Service have had serious discussions with prosecutors about charging eBay under a section of the federal code called “Causing an Act to be Done.” But it’s probably not a smart move for the U.S. or any other CITES nation to take legal action against eBay. The service’s big artillery piece — Lacey Act felony prosecution — would likely be ineffective against a company that attempts, however unsuccessfully, to delete illegal items. According to Joe Johns, environmental crimes chief for the U.S. Attorney’s office in central California, prosecution under Lacey Act misdemeanor provisions — which require only proof of negligence, not knowledge and intent — might well succeed. But that’s a BB gun.

To save endangered species, CITES nations need to move with more than misdemeanor indictments against the worst online markets. Consider the mountains of wildlife contraband available on eBay, one of the very few sites that makes a good-faith effort at control, then imagine what traffic is like on those that don’t.

Global Internet marketplaces need to be required by legislation to ban all wildlife products, regardless of species, and all imitation ivory products. That’s the only way to shut down illegal trafficking and significantly slow the accelerating extinction rate.