After a decade in which coal has been grabbing an ever-larger share of the world’s energy supply, could coal’s boom be about to turn to bust? Both the United States and China are planning to curb coal, and analysts say the repercussions for the global industry could be dramatic. The world may soon breathe a great deal easier, as the biggest contributor to both urban smog and climate change goes into decline. 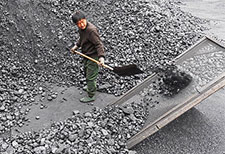 A worker shovels coal at a mine facility in Anhui province in eastern China. AFP/GETTY IMAGES

Earlier this month, the Obama administration announced curbs on CO2 emissions from coal-fired power plants, designed to deliver a cut in U.S. carbon emissions of 30 percent between 2005 and 2030. The Environmental Protection Agency estimates that the measures, combined with the growth of natural gas fracking, will take coal’s share of U.S. electricity production from more than 50 percent in the late 1990s to 31 percent by 2030. Within hours of the U.S. administration’s announcement, there were renewed hints that China — the world’s largest coal user — is headed in the same direction.

Market analysts are suggesting that investors are about to pull the plug on coal. And as the coal tide retreats, the planet’s vast investment in coal infrastructure could start to look as dumb as a subprime mortgage in 2007.

For all the talk of cutting emissions, coal’s share of global energy use has risen in the last ten years.

This would be a huge turnaround. The rise in the past decade of coal, the most carbon-intensive of major fossil fuels, has been astounding. For all the political talk of cutting carbon emissions, coal’s share of global energy rose from 25 to 30 percent. Most of this was due to China, which gets 80 percent of its electricity from coal.

As the world’s largest energy user and CO2 emitter, China currently uses almost 50 percent of the world’s coal. A staggering 82 percent of the global increase in coal use since 2000 has been attributable to China, according to the U.S. Energy Information Administration.

Having outstripped its own large coal reserves, China has been ransacking the world for coal, driving massive investments in new mining, notably in Australia, Indonesia, and Mongolia, but also in South Africa, Russia, and Kazakhstan. Its state-owned Shenhua Group is the world’s largest coal company, almost twice the size of U.S. giant Peabody Energy.

This has been a disaster for climate change. More than half of the increase in global CO2 emissions in the past decade was due to increased coal burning in China. As a report from Greenpeace East Asia in April noted: “China’s coal consumption has become the single most significant determinant for the future of the world’s climate.” According to Ajay Gambhir of the Grantham Institute for Climate Change at Imperial College London, if China continues on the same trajectory, it would double its coal burning again by 2030.

But it won’t, say analysts. China is changing. A decade ago growth in China’s coal consumption was 18 percent a year; now it is down to below 3 percent. Peak coal is imminent in China.

Nan Zhou and colleagues at the China Energy Group of the Lawrence Berkeley National Laboratory, say that with current trends and policies, the peak will likely occur in 2020. It could be sooner. Anthony Yuen at Citi Research, part of the CitiGroup, predicted last September in a report entitled The Unimaginable: Peak Coal in China, a “flattening or peaking” of the power sector’s use of coal before 2020.

The peak will be followed by a long decline, according to BP’s most recent energy outlook, published in January, which suggests that between now and 2035, “coal’s contribution to growth [in China] diminishes rapidly,” with renewables being the biggest winner.

The analysts point to three reasons for the eclipse of coal in China. First, growth in demand for energy in China is slackening. Second, burning coal faces serious environmental limits, notably air pollution and water shortages — and, in the future, carbon limits. And finally, there are more viable alternatives, such as renewables, natural gas, and nuclear.

In search of alternatives, China is now the world’s biggest investor in renewables.

Meanwhile, concern about smog is now a major political issue in China. The regular TV footage of near-zero visibility in major cities has been backed up by recent research findings that dirty air is cutting more than five years off the life expectancy of the half-billion citizens of northern China.

Meanwhile the water needed for power station cooling towers is running out. Most of the country’s coal reserves are in the dry west. Tianyi Luo of the World Resources Institute last year found that 51 percent of planned future coal power stations in China were in provinces with “extremely high water stress”: Inner Mongolia, Shanxi, Shaanxi, Ganshu, Ningxia and Hebei.

In the search for alternatives, China is now the world’s biggest investor in renewables. It spent $56 billion in 2013 alone. That has made China the world’s largest generator of both solar and wind energy. Along with hydro-dams, solar and wind now deliver 9 percent of China’s electricity. Meanwhile, shale gas is on the horizon, and some 40 percent of the nuclear power plants currently under construction in the world are in China, where 28 nuclear plants are under construction.

Certainly, Chinese investment in coal has not ceased. In 2013, the government approved a series of major mining projects that are expected to increase coal production by 2-3 percent in the coming years. But with an economy still growing by 7 percent a year, the trend is in the right direction.

China seems to be verge of setting specific emissions targets. The big issue is when.

A final reason why China is on course to reduce its dependence on coal is its climate policy. Surprising to some, China already has rules to curb its soaring carbon emissions. So far, these relate only to reducing the carbon intensity of its economy — that is the number of tons of carbon emitted per dollar of GDP. China is committed to reducing carbon intensity by 40-45 percent from 2005 to 2020. Progress looks good, according to a study by the European Commission’s Joint Research Center last November. In 2012, the economy grew 8 percent but emissions grew only 3 percent.

The extent of progress partly reflects the gross inefficiency of the Chinese energy industry in the past, however. China currently produces 29 percent of global CO2 emissions, despite having only 15 percent of the global GDP.

Nonetheless, on the back of its carbon efficiency targets, China seems to be on the verge of setting specific emissions targets. Initially, they will allow a continued rise in emissions, which remain less than half those of the U.S. if measured per head of population. But eventually there will be a peak. The big issue is when.

Earlier this month, He Jiankun, chairman of China’s advisory committee on climate change, said China was likely to introduce carbon caps in its next five-year plan, starting in 2016. This caused a stir, and he later clarified that this was his personal view only, not government policy. China’s chief negotiator at international climate talks, Xie Zhenhua, responded that experts were still divided on when to peak China’s CO2 emissions, though it would happen “as soon as possible.”

The detail may be hazy, but the big picture is becoming clear. China expects to peak coal burning soon, and, despite continued economic growth, that should lead to a peak in CO2 emissions perhaps a decade later.

Since China burns half the world’s coal, this matters hugely for the planet. But it is more than that. Because where China goes, other developing countries follow. India, the other coal superpower, is increasingly beset by smog and rampant corruption in the coal industry, which provides 70 percent of the country’s electricity. But there are signs that India could be ripe for change too.

There are signs that India, with its new prime minister, may be ripe for change too.

India’s new prime minister, Narendra Modi, is a known advocate for solar power. While chief minister in the state of Gujarat, he introduced incentives for solar that pushed its contribution to the state’s energy supply to 4 percent. During the election campaign, his BJP party promised solar panels in every village, which would provide electricity to the 400 million Indians without it within the next five years. The idea is catching on, and many analysts say that in India too, the grip of coal is starting to loosen.

But China is big enough to change the world on its own. An early peak and sharp decline in China’s coal burning would almost certainly trigger massive changes to the global coal industry, Citi’s Yuen wrote. “Investors should price for higher probabilities of lower coal demand.” The smart money, he indicated, is now on renewables, particularly photovoltaics.

It is not just that demand for coal will dry up as China peaks its coal burning, but that massive assets from the recent boom in coal investment will be left stranded. Coal could swiftly become a very bad investment.

The Carbon Tracker Initiative, which analyzes climate risk for financial markets, warns in a report out this month that there is a real risk of “asset stranding.” Coal mining companies in Indonesia, Australia and elsewhere are still expanding production on assumptions about ever-rising coal consumption in China. Last December, Australia approved a new coal port on Queensland and a major new coal mine inland from the port in the Galilee basin. That looks misguided, says report author Luke Sussams. If China cuts its coal imports, as most analysts anticipate, he writes, that will leave “very few options for future coal sector growth globally.”

There are implications in the U.S. too, where companies like Peabody plan to hedge against declining U.S. coal demand by building transport infrastructure to export via Pacific Coast ports to Asia. As the Sightline Institute, a sustainability think tank, warned last October, recent drops in coal prices are likely to be the start of a new era, making such projects unviable.

So the coal party is over. And the more the coal industry delays recognizing this, the worse the downside will be, says Nils Johnson, of the International Institute for Applied Systems Analysis, an Austria-based think tank, who published a study of the stranding issue earlier this year.

Politicians should act, he says. “If we don’t send policy signals immediately to discourage coal, more and more capacity will be built, and this capacity will be absolutely stranded once more stringent policy is implemented,” Johnson says. Recent research suggests that China was the first place in the world where coal was routinely burned — 3,500 years ago. But having built its industrial revolution on coal, China may soon be instrumental in bringing that era to an end. And the shock of China’s transition could be the seismic event needed to break the world’s addiction to this most dangerous of fuels.