Angela Maldonado’s day has just been made.

Crouched on an observation platform built at tree canopy level 100 feet above the floor of Colombia’s Amazon jungle, she spies a family of pygmy marmosets. Adults grow to no more than 7 inches in size, making them Latin America’s smallest primates.

“It’s thrilling not only because they are hard to spot but because they are special in other ways,” Maldonado whispered from her perch in the Tanimboca Nature Reserve, located 10 miles north of Leticia, Colombia’s main Amazon River port city. “They produce twins for example and it’s the males not the females who carry the infants on their backs.” 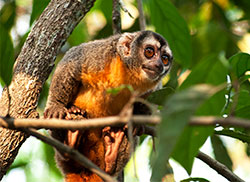 Aotus vociferans, known as the night or owl monkey, near Leticia in Colombia. ANGELA MARTINEZ

For Maldonado, the marmosets are interesting per se: She is a primate conservationist who has made defense of the rights of monkeys her life’s work, a labor that in 2010 won her the UK’s prestigious Whitley Fund for Nature prize.

Colombia’s 36 primate species need the attention: Up to half of them — including the pygmy marmoset, which is hunted by pet traffickers — are endangered. One of those species, the owl or night monkey (Aotus vociferans), has become closely associated in Colombia with Maldonado. In November, she won a highly publicized court case against medical researcher Manuel Elkin Patarroyo for his use of captured night monkeys in his attempt to develop a malaria vaccine.

A malaria vaccine could potentially eradicate a global scourge that kills an estimated 627,000 people annually.

The case has pitted the protection and rights of primates against a prominent researcher who says that night monkeys are indispensible to his efforts to develop a malaria vaccine that could potentially eradicate a global scourge that in 2012 affected 207 million victims and killed an estimated 627,000 people.

The case has also stirred heated debate among medical researchers, primatologists, and environmentalists at a time when criticism of the use of monkeys in laboratory experiments is rising. The European Union has in recent years moved to ban altogether the use of large apes in lab experiments and to restrict the use of lesser primates. The Institute of Medicine, the medical branch of the U.S. National Academy of Sciences, said in a 2011 report that using chimpanzees in vaccine experiments is “largely unnecessary” because of emerging cell technology and other animal research models.

In the suit, Maldonado accused Patarroyo of, among other things, far exceeding the number of monkeys he was permitted to capture, buying illegally imported monkeys, inhumane treatment of the primates, and re-releasing them back into nature in ways that violated guidelines set by the International Primatological Society.

Maldonado and others do not oppose the use of primates in research but believe only those raised in captivity should be used in laboratories, so as to minimize the impact of captures on jungle ecology. Although other researchers in Colombia and elsewhere capture monkeys to start criaderos, or captive monkey colonies, Maldonado said she knows of no other scientist who uses animals taken directly from the wild.

Indigenous hunters cut down as many as 225 square meters of forest to isolate each monkey before capture.

Patarroyo’s search for a malaria vaccine met with some success in the 1980s when a trial vaccine, based on a synthetic peptide called SPf66, showed early promise. Ultimately, however, it was deemed ineffective in Phase III clinical trials and is now on the World Health Organization’s “inactive” list.

It is Patarroyo’s methods of acquiring, maintaining, and releasing his lab monkeys that has aroused the ire of Maldonado and other activists. He has paid indigenous communities up to $40 per animal to capture them in the wild — a practice she says has led to indigenous hunters cutting down as many as 225 square meters of forest to isolate each monkey before capture. The captures also adversely affect jungle biodiversity because of the loss of the night monkeys’ function as seed dispersers.

Although Patarroyo had government permits to use 800 captured animals a year, Maldonado alleged in her lawsuit that he acquired an average of 2,000 per year in 2007 and 2008. She also gathered data indicating that many of the animals Patarroyo’s lab acquired were brought in illegally by hunters from Brazil and Peru, both located across the Amazon River from Leticia.

Colombia’s highest court, the Consejo de Estado, sided with Maldonado, and in its November ruling revoked Patarroyo’s permit to use captured night monkeys at his Leticia-based research lab, the Immunology Research Foundation of Colombia, better known by its Spanish initials FIDIC. He is appealing the decision.

Patarroyo argued the ruling would doom ‘the most important research ever conducted in Colombia.’

Patarroyo argued that the requirement that he apply for a new license and use only monkeys raised in captivity would doom “the most important research ever conducted in Colombia” because it would take too long to breed a critical mass of monkeys in captivity. Patarroyo, who declined to be interviewed for this article, says the decision has stopped his 30-year quest for a “highly effective” vaccine for malaria just as he was on the verge of discovering one.

Reaction to Maldonado’s court victory has been divided. Hailed by primate researchers and environmentalists as a significant advance for animal rights and jungle ecology, it has been slammed by Patarroyo’s admirers in Colombia as a setback to science. They cite his having won the prestigious 1994 Prince of Asturias prize for science awarded by Spain and his many scientific publications. 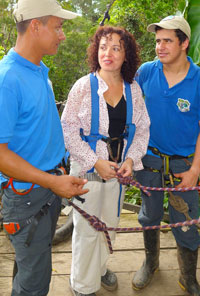 Maldonado has faced a backlash by challenging Pataroyo. One indigenous community in the Amazon that is now prohibited from capturing the monkeys for any purpose other than community food has declared Maldonado persona non grata for causing the community economic hardship. Community leaders warn that she is subject to tribal justice if she sets foot on their land.

Earlier this year, one village called La Libertad put up a 20-foot banner on the shores of the Amazon River that compared her with Hitler, prompting the local prosecutor’s office to offer Maldonado police protection, which she declined.

“The people defaming me are wasting their time because it’s not important what they think,” Maldonado said. “We know we have the law and ethics on our side.”

Maldonado’s road to becoming a primate researcher and activist has been a long and unusual one. She was a young supermarket manager in the southwestern Colombian city of Pasto and headed for a career in business until one day in 1995 when a truck driver walked into her store and changed her life. He offered to exchange his pet wooly monkey for $200 — enough cash to pay for his vehicle repairs.

She handed over the money and took possession of a foot-tall, 15-pound coffee-colored primate named Matias. She kept him for three years, always with the intention of somehow returning him to the wild. “I saw that they’re intelligent, charismatic creatures that can express happiness, pain, and grief,” says Maldonado.

Her efforts to return Matias to the wild in 1998 led her to Thomas Defler, a zoologist and longtime professor at Bogota’s National University. Defler was then operating a biological station in remote eastern Vaupes province where he rehabilitated monkeys that police had seized from traffickers, zoos, or abusive owners. Maldonado took Matias to Defler’s installation and later became manager of the shelter herself after Defler was briefly kidnapped by leftist FARC rebels and decided prudently to leave the jungle.

Maldonado began masters degree field work in 2003 in Colombia’s Amacayucu National Park near Leticia. Her choice was no coincidence. The park’s jungle is the scene of considerable illegal traffic in primates. The focus of her research changed from wooly monkeys to night monkeys after sharing an Amazon River boat ride with some Indians who were transporting live cargo — several night monkeys in burlap bags that they had captured in Peru and were delivering to FIDIC.

“The indigenous said they had been doing it for many years,” she recalls. She later met a night monkey hunter who said he had captured at least 2,000 monkeys, many of them in Peru, over a 12-year period.

After her complaints to the environmental ministry fell on deaf ears, Maldonado decided to conduct her own research on the traffic in night monkeys and Patarroyo’s use of them, studies that would form the basis of her doctoral thesis and help win her the Whitley Nature Award in 2010.

“I was told it’s none of your business, don’t go into it, it’s dangerous,” recalls Maldonado, who now leads a Leticia-based environmental foundation called Entropika. “But here I am a primate conservationist in this same city where they are trading monkeys every week and I am not going to do anything just because I am afraid?”

She filed her public interest lawsuit against FIDIC in 2011. Two years later, the Colombian high court upheld most of Maldonado’s allegations and also took to task local regulators and agencies for poor oversight of FIDIC.

Defler, who has studied Colombian primates since 1976, said Maldonado’s court victory was a landmark. “Up to now people have been able to skirt environmental laws based on the people they know,” says Defler. “This is the first time I know of that a citizen has mounted a challenge like this [in Colombia] and been supported by the legal system.”

The Maldonado vs FIDIC case is just one skirmish in a global battle over primate use in biomedical research. While the European Union has since 2010 banned outright the use of large apes such as gorillas, chimpanzees, and orangutans, the restrictions have resulted in the transfer of some European research operations to the U.S., where rules governing the use of primates in labs are more relaxed.

At its May meeting in Mexico, the animals committee of the global Convention on International Trade in Endangered Species, (CITES) expressed concern over the trade in monkeys and macaques in Laos, Cambodia, and Vietnam. Sian Evans, a zoology professor at Florida International University in Miami said 17,000 monkeys — about 10,000 of them macaques — were imported by the U.S. last year, and primatologists fear that many are captured in Southeast Asia and not raised in captivity as traders claim.

Sarah Kite, a spokeswoman for the London-based British Union for the Abolition of Vivisection — one of the many animal rights groups that lobbied CITES to recognize the macaque problem — said her group opposes the use of primates in lab experiments on moral and scientific grounds.

“Sentience, the ability to be conscious and to feel, is not limited to humans,” Kite said in an email. “Confining primates to cages in laboratories, depriving them of many of their natural behaviors, and subjecting them to stressful environments and painful interventions causes significant suffering.”

Correction, July 21, 2014: An earlier version of this article incorrectly listed the scientific name of the owl or night monkey. The correct name is Aotus vociferans.