A tiny pinwheel spins in the desert breeze atop the roof of the Global Research Technologies headquarters in Tucson. For seven months, the pinwheel has endured the blazing Arizona sun, blistering heat, wind, dust, and — finally — torrential rains. At the end of it all, the synthetic resin that makes up this seeming child’s toy has pulled carbon dioxide from the air that flowed through it and, with the rains, released it again.

The pinwheel is one of the first demonstrations of a technology that may one day be in great demand this century: devices that can extract from the air some of the billions of tons of heat-trapping CO2 being generated by industrial society. Known loosely as “artificial trees” for their ability to mimic a plant’s own uptake of carbon, such “air capture” technology has been touted as one of the most promising of the many proposed geoengineering schemes that could be used to cool an overheated planet.

“If we really do get into a situation where we realize that we’ve changed the atmosphere too much for our own well-being, there are at least ways to back off of that,” argues climate scientist Ken Caldeira of the Carnegie Institution of Washington at Stanford University, an expert on geoengineering. “There’s no fundamental limit on how much you could scale those activities up. It’s mostly a matter of how many resources you throw at it.”

Even if the technology is successful, scientists face the problem of what to do with the CO2.

Recent reports from the U.K.’s Royal Society and the Institution of Mechanical Engineers singled out air capture as the safest and potentially most effective of proposed geoengineering technologies. Although air capture is certainly not without its environmental impacts, the two groups noted that other geoengineering schemes — such as seeding the oceans with iron to stimulate the growth of CO2-absorbing algae, mimicking a volcanic eruption to shade the planet, or launching mirrors into space to deflect the sun’s energy away from Earth — could have far more unpredictable and potentially destabilizing effects.

Proponents of air-capture technology acknowledge it is far from a perfect solution and will not enable humankind to continue spewing CO2 into the atmosphere with impunity. First, although it has been successfully tested on a small scale, air capture is at least five years away from being tested on a larger scale and, after that, could take at least two decades before it could be widely deployed. Second, to set up enough artificial trees to make a dent in reducing the vast amounts of CO2 being produced by humanity would require massive production at enormous expense.

“The cost estimates for capturing CO2 from ambient air are gross underestimates,” says principal research engineer Howard Herzog at the Massachusetts Institute of Technology. “It’s actually still a question whether it will take more energy to capture CO2 than the CO2 associated with [fossil fuel] energy in the first place.”

Even if artificial trees do prove capable of pulling large amounts of CO2 from the air, scientists then face the problem of what to do with that carbon dioxide. Underground sequestration — one possible solution — is still in the experimental stages. And deploying such artificial trees on a mass scale will have significant environmental costs, including producing the electricity needed to run them, the large land area the air capture devices would occupy, and the manufacture and installation of devices using resins, plastics, and other substances that could release air pollutants.

As the Royal Society report notes, air capture could “require the creation of an industry that moves material on a scale as large as (if not larger than) that of current fossil fuel extraction, with the risk of substantial local environmental degradation and significant energy requirements.”

In short, to extract enough CO2 from the atmosphere to begin to lower temperatures would require decades of building millions of air-capture devices that have been refined to minimize their environmental impact. Political scientist Roger Pielke, Jr. of the University of Colorado-Boulder estimates that 650 billion tons of carbon will need to be disposed of by 2100 to keep atmospheric concentrations of CO2 around 450 parts per million, a level that could easily lead to temperature rises of 2 degrees C (3.6 F) or higher.

“You need 30 years of development time and 100 years of deployment before you start to see the effect you’re looking for,” says oceanographer John Shepherd, who led the Royal Society study of air capture and other geoengineering technologies.

If emissions are not reined in, the need for air capture technology could be urgent.

That said, if humanity fails to rein in its greenhouse gas emissions, the need for air capture technology could be urgent. After all, concentrations of atmospheric carbon dioxide have reached 387 parts-per-million (ppm), more than 100 ppm higher than pre-industrial levels and quickly moving beyond what some consider to be a safe level of 350 ppm. Since the establishment of the United Nations Framework Convention on Climate Change in 1992, fossil fuel CO2 emissions have grown by more than 30 percent and overall human-caused emissions have now reached roughly 30 billion tons per year.

“Unless future efforts to reduce greenhouse gas emissions are much more successful than they have been so far,” the Royal Society wrote in its September report, “additional action may be required should it become necessary to cool the Earth this century.”

Pulling CO2 from the air is simple chemistry. After all, a bottle of sodium hydroxide — also known as lye and a primary constituent of everything from soap to pulp and paper — must be kept carefully sealed. That’s because the strong base — the opposite of acid — will be neutralized if exposed to air by rapidly sucking up the CO2 and then transforming the lye into sodium carbonate and, ultimately, baking soda. The captured CO2 can then be extracted via the industrial process of heating the compound above 900 degrees C in a kiln, releasing the CO2, and enabling the sodium hydroxide to regenerate its ability to suck up yet more CO2.

The process works, but as physicist Klaus Lackner at Columbia University’s Earth Institute — one of the scientists behind the GRT pinwheel — explains, “The energy to pry out the CO2 is very high.” 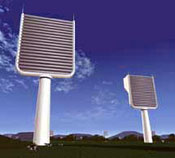 So-called “artificial trees” mimic a plant’s own uptake of carbon.

That’s why Lackner has moved in the direction of finding a strong base resin, such as Dow Chemical’s Marathon A, typically used to produce purified water. The synthetic resin in the pinwheel absorbs CO2 to form bicarbonates when dry, but then spits out the CO2 when exposed to water. “Basically, we can swing between being dry and wet,” Lackner says. “Let the resin sit in air, because air will dry it, and it will absorb CO2, taking an hour to load up. Make it wet, and it’s an hour to unload.”

This type of device could be housed in an “oversized furnace filter,” about three feet wide by eight feet long, loosely filled with sheets of the resin, constituting the leaves of this artificial tree. Such a device could capture CO2 for less than $300 per metric ton, though it wouldn’t function in cold climates or the humid tropics.

A number of experiments involving air capture technologies are underway, ranging from efforts to use solid amines — ammonia transformed into compounds capable of bonding with CO2 — to technologies now used to capture some flue gases from exhaust at fossil fuel-fired power plants. Scientists also are attempting to use algae — the workhorses of the Earth’s natural carbon cycle — to cleanse the air of excess CO2. That could have the benefit of creating a new source of fuel or power, since algae incorporate nearly as much energy per kilogram as coal. But as the U.K.’s Institution of Mechanical Engineers put it, algae bioreactors “are a fledgling technology and at the moment are too expensive to be commercially viable.”

Artificial trees, on the other hand, could be available as soon as next decade. The mechanical engineers believe a demonstration could occur as soon as 2014, followed by a full-scale “artificial forest” by 2018 and global deployment by 2040. In the long term, such air capture theoretically has the potential to cancel out human emissions of CO2, according to earth system scientist Tim Lenton of the University of East Anglia.

Scientists also are attempting to use algae to cleanse the air of excess CO2.

Assuming that CO2 can be pulled from ambient air, that still leaves the other half of the problem: storing it safely somewhere. Efforts to capture CO2 from coal-fired power plants have seized upon geologic sequestrations a potential solution. The U.S. Department of Energy estimates that the continental U.S. alone has room for 3.9 trillion tons of CO2 underground, more than enough room for the 3.2 billion tons emitted every year by large industrial sources. Still, major questions remain about underground sequestration, including its impact on groundwater supplies, subterranean pressure, and the potential for the CO2 to leak back into the atmosphere.

Certain geologic formations may offer a solution by mimicking the chemical transformation of air capture itself. Basalt formations — a residue of volcanic activity — can absorb CO2 and, over decades, transform it into minerals. An experiment by Reykjavik Energy to prove the concept by injecting the CO2 from a geothermal power plant into basalt beneath the surface is underway in Iceland, which is primarily composed of the igneous rock.

Even if technology and storage issues are resolved, CO2 air capture will require significant amounts of new electricity to power the devices. Lackner proposes a new fleet of nuclear reactors or widespread solar power.

The Institution of Mechanical Engineers estimates that it could take as many as 10 million air-capture devices sucking up one metric ton of CO2 per day to absorb just 3.6 billion tons — about one-tenth of current global emissions. The costs of deploying these devices could be staggering. Climatologist James Hansen estimates it would cost roughly $20 trillion per 50 ppm of CO2 removed.

“It’s on the scale of the global military effort,” the Carnegie Institution’s Caldeira says. “The tragedy is there’s no reason to be considering these options at all if we could just learn to cooperate [on reducing emissions], but the evidence that we are learning to cooperate is not very strong.”

Still, Lackner remains undeterred. By the end of the year, he hopes to have a small demonstration of his resin-based artificial tree — looking more like a mobile home with a large pinwheel on top — running at Columbia University. Physicist David Keith of the University of Calgary will launch his air capture company, which uses amines to extract CO2, in October.

“If we had lots of money and things went really well, we could build a pilot plant in five years,” Keith says. “I’m not saying we will be. This field is filled with people’s overconfidence.”

The Royal Society’s Shepherd said that, given the expense of air capture technology, “the first line of defense would be carbon capture and storage and taking it out at the point of emission.” But air capture could be effective in offsetting emissions from sources such as airlines, Shepherd said.

The challenges — and expense — of air capture also serve as a stark reminder to policy makers that the best tactic for combating climate change is to pursue energy efficiency and renewable energy programs and avoid emitting CO2 in the first place. As the Royal Society report notes: “The safest and most predictable method of moderating climate change is to take early and effective action to reduce emissions of greenhouse gases. No geoengineering method can provide an easy or readily acceptable alternative solution to the problem of climate change.”

Not even artificial trees.