It has an appealing symmetry to it: If we got ourselves into this climate mess by digging up and burning coal, maybe we can fix it by creating some more coal and putting it back into the ground.

That very idea, involving the charcoal-like substance known as biochar, has been both touted as a planet-saving climate change mitigator and then ridiculed as yet another tilt at the proverbial windmill. Biochar has been lumped in with other so-called geoengineering ideas like solar radiation management and ocean fertilization, but it carries ancillary benefits to agriculture that the other planetary experiments can’t claim. The last two years have seen a sharp rise in research indicating its technical potential, and while the world treads carefully around other geoengineering fixes, there are now dozens of companies already producing and selling biochar on a small scale. Is large-scale deployment really feasible, or is it time for a step back and to take a harder look at whether this is a technology worth pursuing?

One study shows that 12 percent of global greenhouse gas emissions could be offset with biochar production.

Biochar is created using a process called pyrolysis. Organic waste such as wood chips, agricultural byproducts or switchgrass is burned in the presence of little or no oxygen, yielding oil, synthetic gas (known as syngas), and a solid residue resembling charcoal. In fact, it is charcoal, except that the point is not to burn it, but to bury it. The pyrolysis process can be tweaked, with “slow pyrolysis” yielding more biochar and less oil and gas, and a faster version — seconds rather than hours or days — lowering the biochar product and upping the bio-energy side of the equation. In some systems, the syngas and oil can actually be used as a fuel to run the pyrolysis reaction, meaning it requires no external energy source beyond the organic waste itself.

Proponents point to two completely distinct benefits to burying biochar. The first is the ability of biochar to store carbon in a stable form, preventing the CO2 from organic matter from leaking into the atmosphere, where it contributes to climate change. Biochar also enriches soil, which improves food security in developing countries and crop production almost anywhere. The details on the benefit to soil are still being researched, but in certain types of soil, burying biochar can improve crop yields by improving water retention and moderating the pH, or acidity, of the soils.

Creating biochar actually reduces CO2 in the atmosphere because the process takes a theoretically carbon-neutral process of naturally decaying organic matter and turns it carbon-negative: When plants decay, they emit CO2, which other plants eventually absorb, and the cycle continues. Biochar stabilizes that decaying matter and accompanying CO2 and puts it in the ground to stay for — potentially — hundreds or even thousands of years. This idea, with supposedly enormous potential to help slow global warming, has drawn an impressive array of supporters toward biochar. Among its most vocal proponents is James Lovelock, founder of Gaia theory, who has touted biochar as the way to save the planet. The hype elicited a predictable response in the other direction, including scathing columns by The Guardian’s resident environmentalist George Monbiot and warnings from organizations like the UK’s BiofuelWatch. 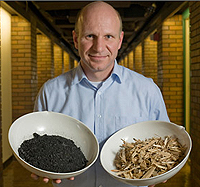 Cornell University
Cornell researcher Johannes Lehmann, a biochar advocate, says the industry should focus on getting pilot programs in place over the next several years.

The backlash came, perhaps, with good reason, as the claims arrived without the support of much strong science. That picture, though, has started to shift. One research group led by Johannes Lehmann at Cornell University recently showed that a full 12 percent of global greenhouse gas emissions could be offset with biochar produced from “sustainably obtained” biomass. In other words, using organic waste that doesn’t affect food production or soil conservation could take about 1.8 gigatons of carbon dioxide, methane, and other gases out of the atmosphere each year. Over a century, Lehmann estimates the total offset at 130 gigatons, an amount that would play a big part in helping bring CO2 concentrations down and slow the world’s rising temperatures and sea levels.

Darko Matovic, a professor of mechanical engineering at Queens University in Ontario, published his own analysis of biochar’s potential and also found it to be enormous. He contends that burning and burying 10 percent of the world’s biomass waste would sequester nearly five gigatons of carbon annually — more than the net 4.1 gigatons that human activity adds to the atmosphere each year. Humans emit roughly 28 gigatons of CO2 into the atmosphere each year, but much of that is taken up by vegetation and oceans.

“The idea of biochar is really attractive, and in my opinion it is the only viable way of removing carbon dioxide from the atmosphere,” Matovic says. He and Lehmann agree on the ability of biochar to play a big role in fighting catastrophic climate change; Lehmann says the discussion on potential is largely over, and over the next several years getting pilot projects at large scales — meaning, industrial-sized pyrolysis plants — off the ground is the priority for the field.

Of course, the important thing to remember is that these analyses show technical potential rather than realistic goals. The logistics of actually converting 10 percent or more of the world’s organic waste into biochar and burying the result are, at this point at least, incredibly daunting.

“There are a lot of analyses that still have to be done to prove the economic potential, the social potential, the logistical potential,” says Debbie Reed, executive director of the non-profit International Biochar Initiative. “How would we do this? How long would it take to deploy? How much money would it cost?”

One critic says that burning biomass instead of coal would make more sense than burying it.

David Keith, a professor at the University of Calgary and a geoengineering expert, thinks the save-the-planet hype of biochar falls apart when one looks into the details. “What does pure technical potential mean? It’s a meaningless concept,” he says. “The pure technical potential of lots of things is big enough to solve the climate problem. What matters is the relative utility.”

Keith says that in order to reach the amounts of biochar needed to have an effect on global climate systems, massive amounts of organic material would have to be gathered in central locations. Once that is the case, burning the biomass as a replacement for coal in power plants would make far more sense than burying it, he says.

“Why bury reduced carbon that has all that energy? It’s just senseless, unless you were in a world that needed no energy… You want to make a fuel if you’ve got a lot of carbon and you’re in a world that needs fuels.” If we could eventually add carbon capture and sequestration technologies to those plants burning the biomass, Keith adds, then the resulting greenhouse gas benefit would be almost twice as large as that yielded by burying the biochar.

The biochar advocates disagree. Matovic noted in his paper that carbon capture and sequestration carries its own significant energy requirements, and the fact that it may take decades to bring the technology into commercial viability swings the emissions reduction equation back in favor of burying biochar.

And Matovic and Lehmann are not alone: Along with James Lovelock, NASA’s Jim Hansen has published on the potential of the idea. Hansen was among the targets of Monbiot’s column questioning the possibilities, but he responded that biochar is far from a “miracle cure” but could absolutely add some benefit to a range of climate mitigation strategies. UN officials have also argued for its potential, and the United Nations Framework Convention on Climate Change included it in recent documents as a potential sequestration tool. Also, a recent Natural Resources Defense Council report, though cautious in touting biochar’s benefits, calls for up to $150 million over eight years to start commercial-scale pilot projects.

Unlike other geoengineering schemes, biochar is already happening and can be done on a local scale.

Some biochar skeptics also bring up familiar problems in environmental circles. If adopted on a large scale, producing biochar eventually would be worth money in carbon trading schemes: Countries or companies will pay others to burn large amounts of biomass in industrial-scale plants and bury the biochar produced as a way of offsetting their own emissions. If not properly regulated, though, there is the chance that those hoping to make money on biochar would displace food crops with switchgrass or even forests planted solely for the purposes of biochar production. The same problem has turned the considerable weight of the environmental movement almost completely against corn ethanol production.

Lehmann, of Cornell, says this problem can be avoided if the appropriate regulatory scheme is put into place. A trading mechanism could simply exclude biochar that results in indirect land use changes, where food products are displaced. With no way to profit on such schemes, Lehmann doesn’t think they would crop up. The corn ethanol story, though, as well as some other carbon trading missteps, suggests our regulatory decision-making isn’t always so perfect.

The potential problem with global biochar rollout is somewhat similar to those of solar radiation management (which involves injecting massive amounts of sulfates, like those from volcanic eruptions, into the stratosphere in order to cool the planet) or ocean fertilization (where we would dump huge quantities of iron into the oceans in order to absorb carbon dioxide from the air): Conducting experiments on a planetary scale may have unforeseen negative consequences, be they physical and chemical or more social, like indirect land use change. But there are significant differences: Biochar is already happening, and can be done on a more local scale.

As of yet, it is only happening on a small scale that even skeptics like Keith agree could be beneficial if done right. Even the small projects, though, are outpacing the need for a solid framework for the industry. Reed, of the International Biochar Initiative, says one of her group’s primary areas of focus in the coming year or two is on definitions, standards, and guidelines. If biochar is sold for use as a soil additive, buyers need to know exactly what they’re getting — was it slow or fast pyrolysis that made the product; what is the pH and other chemical properties; what types of soils would the specific product work best in, and so on.

These standards can’t arrive soon enough: Reed says there are more than 120 companies already producing biochar or biochar-related products, including pyrolysis cook stoves. Most of the companies are located in the United States, such as Massachusetts-based New England Biochar, and are producing biochar for farms and gardeners or selling pyrolosis equipment. Although the number of companies involved continues to rise dramatically — including firms in Europe, Australia, and Brazil — there has been little indication of a profitable business model to this point.

As the commercial biochar field begins to take off, the idea is also now getting attention from policy makers that is either welcome or unwarranted, depending on one’s point of view. A recent report commissioned by U.S. Rep. Bart Gordon (D—Tenn.), chairman of the House committee on science and technology, also highlighted its potential for carbon sequestration. It acknowledges the “economic challenges” of large-scale development, but there is no hint yet that any regulatory framework to control the small but growing market in biochar technology.

“Some people fear that the right rules will never be in place, but you can always argue about that,” Lehmann says. “Just because someone might do the wrong thing, we can’t not do anything.”

Correction, Dec. 9, 2010: An earlier version of this story incorrectly stated the annual emissions of CO2 from human activity. The correct figure is roughly 28 gigatons per year.