For the Rev. Lennox Yearwood Jr., hip hop culture may be the key to bringing together the movements for social and environmental justice. The minister and community organizer is president and CEO of the Hip Hop Caucus, an advocacy organization focused on voter engagement that links hip hop culture with grassroots campaigns to bring about social change. One major campaign, People’s Climate Music, unites hip hop artists and celebrities such as Common, 2 Chainz, and Malik Yusef with climate activists and national environmental organizations, with the goal of fighting for climate justice, particularly in urban communities of color. Yearwood and the Hip Hop Caucus recently completed the “Act on Climate National Bus Tour,” a series of rallies, concerts, block parties, and other community events in 16 cities from New Orleans to Ferguson to Baltimore. 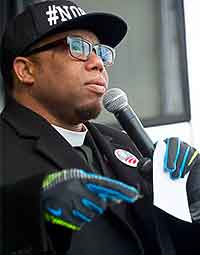 In an interview with Yale Environment 360, Yearwood describes how the environmental, climate, and social justice movements are inextricably linked — poverty and pollution, he says, “are the same thing.” He extols Pope Francis’ emphasis on the vulnerability of the poor to pollution and climate change, likens our recalcitrance in dealing with global warming to the refusal of 19th-century Americans to end slavery, and says that the climate movement must become far more inclusive to succeed. “The movement — to win — has to be everybody: black, white, brown, yellow, male, female, straight, gay, theist, atheist,” says Yearwood. “We have to build a more diverse and inclusive movement. If we don’t do that, it’s game over. We lose.”

Yale Environment 360: Tell me about your work with the Hip Hop Caucus. How did you become involved in the movement for climate justice?

‘We recognize that the only way to get climate justice is through social justice.’

We’ve used our cultural expression to shape our political experience. We organize people in masses around the country using culture and poetry, art and music. Also, we’re truly looking for solutions. In the 20th century, urban communities — people of color — had to be revolutionary. But now this generation wants to be “solutionary.” That means before we go outside to the streets, let’s figure out if that’s the plan. It might not be the plan. It might be to work on an electoral process. It might mean we work on the [corporate] board. We might need to put people in positions of power. Our viewpoint is a little bit different. We take a much more inside/outside approach to activism than I think our parents did.

e360: How does that factor in to the way you approach climate issues?

Yearwood: We’ve approached climate from the standpoint that we were never going to be an add-on to the movement. It wasn’t like we were going to be NRDC, or 350.org, or Sierra Club, or Greenpeace. We will always be the Hip Hop Caucus. We felt if we were an add-on, then the people who we would come with would be add-ons as well. We had to part of the prescription, part of the medicine, part of the solution. That would be the only way that we would find success.

It gets young people involved because they feel much more comfortable. When we go to Ferguson [Missouri], or New Orleans, or Chicago, or Detroit, we’re not coming there either to tell you what’s going on or to just come there in charity to help you. It truly is in solidarity, and I think that’s different.

e360: You go into communities, like Ferguson, where they’re facing really acute issues such as police brutality and economic oppression. How do you convey an urgent message about climate change? What’s been your response?

I admire my friends at 350.org. Their name is in essence about trying to get to 350 parts per million carbon dioxide in the air. We’re at 400 right now. The real number, though, should be 50 plus 1. How do we get to the majority so we can enact policy? Because that is the key. That’s why communications are so important. I don’t think we’re doing a good job there. We’re not communicating our political argument as well as we are trying to create simply a scientific argument.

How that relates to Ferguson is that we know that more people are killed by decisions in the boardroom than by a badge. We know that companies continue to look upon the poor, and particularly communities of color, as the path of least resistance. Putting toxins, landfills, refineries, coal-fired power plants — everything they can and want — into the community. They know this causes emphysema, bronchitis, cancer. They know this.

‘The climate movement is sometimes not as patient or understanding of folks who are outside their movement.’

This is why the issue is critical for our community. That’s why we did our Act on Climate Tour. We just bring awareness. When that’s done, people move to change that atrocity.

e360: Do you find that you have to educate [hip hop] artists about climate issues?

Once they get more involved, it becomes part of their art. For example, Malik Yusef, a producer for Kanye [West], helped produce the climate album, “Home.” There are so many like that who are very good and transforming and getting involved in the climate issue.

e360: Speaking of the environmental movement, it still largely remains a relatively elitist one. What can be done to make it more inclusive?

Yearwood: That’s the journey we’re on now. It’s not an easy one. It’s two-fold. One, there are many people who recognize that the movement, as currently structured, will not defeat the fossil fuel industry. The movement — to win — has to be everybody: black, white, brown, yellow, male, female, straight, gay, theist, atheist. It has to be human. The only way we win this battle against one of the most entrenched international industries will be true people power, at all levels. And as constructed, the climate movement — being a predominately American, predominately white, predominately rich, and educated from the standpoint of a traditional academy — while shifting, does not win this battle. We have to build a more diverse and inclusive movement. If we don’t do that, it’s game over. We lose.

‘We believe that having clean air and clean water is a civil rights issue.’

You have to open the doors up of the movement. And you have to make sure that this is wide open and inclusive, which will probably be uncomfortable. But it’s the only way you’re going to win and that’s where we are. I think if the movement can do that — and I believe it can — then we will win.

There are no other issues that affect all of us. We believe that having clean air and clean water is a civil rights issue. I think that’s one of the key things that helps us to meet on the issues.

e360: You’re talking about this being a civil rights issue and bringing the moral impetus to climate change as Pope Francis has in recent months. Does being a minister give you a certain authority to make the moral claim about climate change in a way that a layperson or a trained scientist cannot?

Yearwood: No. I think we all as humans have a moral authority to speak up for humanity. The faith perspective — their living is made on making the unseen seen and bringing about the issue of faith to believe in something that’s bigger than yourself, as well as being responsible, being care keepers. Every faith, as the pope said, has been charged with taking care of nature and the planet. It’s nothing new in that regard. I think the friction has been between faith and science.

I think what the pope has done, in a very eloquent fashion, is allowed scientists, who sometimes aren’t the most faith-centered types, to begin to have a cohesive argument and a strategy for fighting against climate change. That’s exciting. I think that he’s been able to bring the issue of climate change to the forefront. I’ve been involved in the issue now for over a decade at a very high level, and I’ve never seen anything like what the pope has done [in his recent U.S. visit]. With the pope beating the drum from D.C. to New York to Philly, I’ve never seen more people discussing climate change, who I know weren’t discussing it before. Clearly it was a perfect storm. You had him discussing climate change. You had the president of China coming in [to Washington and talking] about the emissions and pollution and a carbon tax. It was an amazing week, it really was.

My hope is that we will see that we are at a time that we must transition.

The next step is that churches across the land have to continue to move in that direction and speak with that kind of authority. But it’s definitely not limited to faith people. I mean, scientists have to speak up. If you have the science, clearly you know what this looks like. You will have more authority to sound the alarms.

e360: Every picture I see, you’ve got a different hat on.

ALSO FROM YALE e360Coal Pollution and the Fight For Environmental Justice

As its director of “climate justice,” Jacqueline Patterson is leading the NAACP’s campaign to shut down coal-burning power plants in minority communities. In an interview with Yale Environment 360, she talks about the skepticism she faces from her own constituents.READ MORE

e360: Are you hopeful we’re going to get there?

Yearwood: We have to get there. Hopeful is a great question. I am hopeful that man continues to recognize that we have to transition. I’m hopeful that a hundred years from now, that the next generation will look upon this moment as we do slavery, from the standpoint of how could they even think that was right? I’m hopeful that we will transition quickly, so that we won’t have that stain like they did.

It’s interesting. Many schools — Yale, Harvard, Georgetown — benefited from and knowingly were involved with the slave process. At the time, many schools were debating how they should respond to that. But the long story short of this is that many schools didn’t want to hurt their donors, who they knew were slaveholders. Many schools, even though they were up in the North, didn’t want to transition. I can’t tell you, as somebody who is a descendant of slaves, how hurtful that is, that they who didn’t see at the time the need to move quickly. I would just hope that those who will be hurting from fossil fuels [in the future] look upon what we do in this century, in this generation, and not have the same regret that we didn’t move quickly. My hope is that we will see that we are at a time that we must transition.