Five years ago, when I began researching a book about efforts to stem biodiversity loss, environmental politics was dominated — as it still is — by climate change, a parallel crisis that greatly exacerbates damage to ecosystems and loss of species. Essential as the emphasis on climate is, however, it has engendered a kind of despair among biodiversity specialists, casting a shadow over this other fundamental issue. Talk to people in the conservation trenches, and they will agree with Rodrigo Fuentes, director of a biodiversity center in the Philippines: “Biodiversity loss is a forgotten crisis. It rarely makes the headlines.”

Clearly, we understand the gravity of the biodiversity problem better than we understand the solutions. Despite numerous campaigns by the United Nations and other organizations to stem the loss of habitat and species, the world’s biodiversity — and the ecosystem services supported by it, including carbon sequestration and flood control — is approaching what Hilary Benn, the U.K.’s environment secretary, has called “a point of no return.”

These efforts have expanded the reach of conservation, which cannot rely on parks alone.

Happily, however, there is more to the story. A group of solutions is emerging under the rubric of “rewilding,” and this new movement hasmade considerable progress over the past decade. A Marshall Plan for the environment, rewilding promotes the expansion of core wilderness areas on a vast scale, the restoration of corridors between them (to fight the “island” effect of isolated parks and protected areas), and the reintroduction or protection of top predators.

Known by a shorthand formula — “cores, corridors, and carnivores” — rewilding was first proposed in 1998 by the founder of conservation biology, Michael SoulÃ©, and his fellow conservation biologist, Reed Noss. It was quickly adopted by grassroots initiatives, such as the Yellowstone to Yukon Conservation Initiative (Y2Y), a plan to protect and restore connectivity of ecosystems throughout the Rocky Mountains.

Since then, its central tenets have found their way into the programs of international conservation organizations, which have embraced “continental-scale” conservation and growing bolder in the size of their preservationist programs. As both a conservation method and a grassroots movement, rewilding has taken hold in every inhabited continent, with projects stretching from densely-populated western Europe (the European Green Belt, on the path of the former Iron Curtain) to the remote reaches of southern Africa. What’s more: It has proven an adaptable model, bringing conservation to people and places outside the traditional system of parks and protected areas that lack the resources to succeed on their own.

Encouraging new revenue streams and conservation on private lands, rewilding has achieved notable successes, along with instructive failures. In northern Kenya, an area plagued by lawlessness and drought, the Craig family turned their struggling cattle ranch into the Lewa Wildlife Conservancy, protecting endangered rhinos and building a popular ecotourism business. Then Ian Craig, the family’s third generation — tutored as a teenager in the Kenyan bush by a young Maasai man, Kinanjui Lesenteria — promoted the conservancy model among the Maasai, Samburu, and Meru people on group ranches who had seen their pastoralist lifestyle crippled by successive droughts. 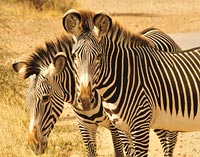 iStockphoto
In Kenya, conservationists are seeing a marked improvement in formerly overgrazed areas, including the return of the endangered Grevy’s zebra.

Eleven group ranches have since joined the Northern Rangelands Trust, with eight of those creating their own conservancies, setting aside a percentage of their grazing land for wildlife and planning eco-lodges. Those with lodges have already dedicated revenue for community improvements, such as schools and medical clinics. A million-and-a-half acres of northern Kenya have thus been set aside for wildlife management, and security for people and wildlife has improved. The Lewa conservancy provides technical assistance and equipment for patrolling Trust lands.

Conservationists in Kenya are seeing a marked improvement in formerly overgrazed areas. Elephants have rebounded from the poaching of years past, resuming their migratory routes, and the highly endangered Grevy’s zebra — which suffered severe habitat loss in recent decades — is returning to old haunts. Lewa now serves as a model for other conservancies in southern Kenya, and visitors from Uganda, Tanzania, and Ethiopia have come to study it. A similar community forestry program in Nepal is restoring corridors there for tigers, the one-horned rhino, and the Asian elephant.

In the American Southwest, galvanized by surprise sightings of jaguars, conservationists have banded together to buy private land in northern Mexico, establishing a core wilderness area to keep that species — and a host of other unique wildlife — viable. They have also reached out to the reserve’s neighbors: Mexican ranchers, like American ones, have always shot big predators on sight, but biologists with Defenders of Wildlife designed a clever contest, equipping ranches with remote camera traps. For every picture of a live jaguar, mountain lion, or other cat, participating ranchers who promised to leave the animals unmolested were paid a handsome sum — $500 for a jaguar, $100 for a mountain lion. Asked what he would do with the money, one rancher said, “Buy more cats!”

Rewilding groups are also learning from their failures. In southern Africa, the Peace Parks Foundation (PPF), which has launched several of the biggest planned conservation projects on the planet, got off on the wrong foot with its Great Limpopo Peace Park, designed to link parks in South Africa, Mozambique, and Zimbabwe. The group released elephants, lions, and other dangerous wildlife into an area where unwitting villagers had yet to be informed of the program. Years later, the organization is still struggling to relocate those villagers affected. International funding agencies attacked the approach and, for a time, cut funding; since then, the PPF has realigned its priorities, making sure to engage communities in prolonged consultations about their needs. No additional projects have called for shifting populations.

Rewilding opens up areas to conservation management and puts people to work.

Conservation on private lands, wildlife conservancies, community-forests: These efforts have significantly expanded the reach of conservation, which cannot rely on parks alone. Another innovation has been in new approaches to financing. Breaking away from the standard fund-raising model — a never-ending cycle, since most money is spent immediately on short-term grants and projects — several rewilding groups have embraced the endowment as a way of supporting conservation’s long-term needs. University of Pennsylvania biologist Daniel Janzen has been instrumental in the phenomenal success of the Area de ConservaciÃ³n Guanacaste (ACG) in northwestern Costa Rica, which accomplished what was once thought impossible by restoring former cattle ranches to dry tropical forest and rainforest. ACG thrives on the interest from its $30 million endowment. Janzen is now seeking a half-billion dollars to endow the entire Costa Rican park system in perpetuity.

But rewilding’s greatest potential may lie in the creation of green jobs. ACG pioneered “parataxonomy,” providing local people with a six-month “bioliteracy” training course in collecting and processing insect specimens that could then be passed on to taxonomists for identification. The parataxonomists are valued contributors to Costa Rica’s National Biodiversity Institute and instrumental in the country’s massive effort to compile an inventory of its extraordinary biodiversity. They have served as foot soldiers in “bioprospecting,” the collection of specimens that may prove useful in medicines or cosmetics: Extracts from the quassia tree, for example, have yielded both a treatment for stomachaches and a promising natural pesticide. The parataxonomy program has been copied in other biodiverse areas in Central Africa and Papua New Guinea.

In several projects, job creation is paired with carbon sequestration. The Baviaanskloof Mega-reserve Project in South Africa has created hundreds of jobs in ecotourism and restoration, training workers to remove invasives and plant native bush in a delicate Cape habitat overgrazed by goats. In Australia, ecological restoration of salt-damaged wheat farms conducted by the Gondwana Link project has provided carbon sequestration while regrowing native bush.

In the United States, the restoration of wetlands is generating jobs, from Chesapeake Bay in the east to Puget Sound in the west. The Puget Sound Partnership, a network of environmental groups and state agencies — tasked with cleaning up decades of pollutants — represents one of the most massive ecological restoration projects in the nation’s history: The partnership recently identified a half-a-billion dollars worth of “shovel-ready” stimulus projects, from removing tons of fishing nets and other debris to restoring tidal salt marsh habitat, itself a powerfully-effective means of sequestering carbon.

Rewilding represents what Dan Janzen has termed “sustainable conservation”: It opens up significant areas to conservation management, and it puts people to work. What international agencies and NGOs need to do is identify rewilding programs that are demonstrably working, support them, and replicate them. As it stands now, even the most successful are not big enough to make the difference for biodiversity. But they could be — and for considerably less money than it will cost to replace the ecosystem services we are destroying, estimated at two to five trillion dollars a year worldwide. What conservation has been doing for decades is simply not working. It’s time to move forward with something bigger, something proven, something new.