The United States now has more than 35,000 megawatts of installed wind energy, enough to power close to 10 million homes. Close on the heels of this ongoing renewable energy revolution is another green technology: By next year tens of thousands of Nissan LEAFs, Chevy Volts, and other electric vehicles will start rolling off assembly lines.

The electricity generation and transportation sectors may seem like two disparate pieces of a puzzle, but in fact they may end up being intimately related. The connection comes in the form of the vehicle-to-grid concept, in which a large electric vehicle (EV) fleet — essentially a group of rechargeable batteries that spend most of their time sitting in driveways and garages — might be used to store excess power when demand is low and feed it back to the grid when demand is high. Utilities and electricity wholesalers would pay the EV owners for providing that power.

Vehicle-to-grid, or V2G, is not a new idea. In fact, it’s been floating around environmental and green tech circles for a decade at least. But it has always had the tough-to-shed image of a utopian technology. Now, though, V2G — as well as simpler schemes based on smart-timed charging of the vehicles — is slowly becoming reality, evolving in quiet synergy with the worldwide push for renewable energy.

Using EVs as a network for storing electricity could be an important tool in decarbonizing the economy.

The main drawback of wind and solar power has always been their intermittency: By now it is more than a cliché to say that the wind doesn’t always blow and the sun doesn’t always shine. To some extent, that claim is specious: Existing power supplies also vary by huge amounts, and flexible generators, such as natural gas power plants, are called on to balance out the blips. This is called frequency regulation.

Those generators can handle only so much variation, though, says Willett Kempton, director of the Center for Carbon Free Power Integration at the University of Delaware and one of the pioneers of the V2G concept. “And also, we’d rather not be using those generators at all. When you get to 40 percent, 50 percent generation coming from renewables, you need some kind of storage, and this [V2G] is a way of getting storage on the system.”

That storage takes the form of the lithium-ion battery pack on board most EVs being produced today. For V2G to work, though, the cars need to be able to communicate with system operators running the electrical grid — this can be accomplished with a simple Internet connection that could be built into the car’s plug. That communication link and a power converter that lets electricity flow both in and out of the battery will allow an overtaxed electrical grid to draw power from a group of cars, and then charge them when there is plenty of electricity to go around. If renewable energy ever supplies a sizeable portion of a nation’s power needs, using EVs as a diffuse network for storing electricity — and then feeding it back to the grid on demand — could be an important tool in decarbonizing the economy.

Increasingly-green Denmark has taken the lead in vehicle-to-grid technology.

V2G technology is beginning to emerge in a number of countries. Japanese carmakers, including Nissan and Mitsubishi, plan to start producing V2G-ready cars by mid-decade. Small pilot projects to test the idea are also underway in Europe, from Sweden to Italy.

Increasingly-green Denmark, though, has taken the lead in V2G adoption. Wind power already accounts for about 20 percent of its electricity supply, and additional planned wind farms will raise that level to 27 percent by the end of 2012 and beyond 50 percent by 2025. At times, when the wind blows strongest, the entire country’s power demand is already met and exceeded by wind turbines. But without a way to store that excess energy, it is essentially lost.

So could a large number of EVs actually help with the huge variations in wind that can occur? According to Claus Ekman, a researcher at the RisÃ¸ National Laboratory for Sustainable Energy in Frederiksborgvej, Denmark, it can, to an extent. Ekman recently published a paper in the journal Renewable Energy that modeled how well EVs could handle increasing wind power generation. He found that in a scenario involving 500,000 vehicles and 8 gigawatts of wind power, various strategies would reduce the excess, or lost, wind power by as much as 800 megawatts — enough to power more than 200,000 homes. Ekman calls this a “significant but not dramatic” effect on the grid. Scenarios involving 2.5 million vehicles and even more wind power show an even greater impact.

“The limitation is the total amount of power that the EVs can absorb,” Ekman told Yale Environment 360. “The peaks in the wind power will be too high for the EVs to absorb them completely.”

The advantage of using car batteries that consumers are buying anyway is undeniable.

Even if a large EV fleet couldn’t handle the full extent of a 50-percent wind power penetration in a country like Denmark, which could be fossil fuel-free by mid-century, it could clearly make a dent. And Denmark has already gone beyond the theoretical, with a V2G project called EDISON running on the small island of Bornholm. The goal is to use the storage capacity of EVs to bring the island’s wind power capacity up to 50 percent of the total demand. Because V2G will reduce the need to generate power from traditional sources, researchers estimate that the price of electricity on the island could drop by 50 percent or more. Though the island is home to only 40,000 people, the project could eventually be used as a proof-of-concept for larger systems, both in Denmark and elsewhere.

In the U.S., commercial-scale V2G projects are farther off, but then again so is 20 percent renewable energy penetration. (The U.S. is currently hovering around 2 percent.) Nonetheless, some progress is being made. For almost a year, several modified vehicles based at the University of Delaware have been providing power back to the grid, and getting paid for it.

Kempton, who runs the Delaware V2G pilot program, notes that using V2G storage, rather than huge centralized aggregations of batteries, eliminates the need for additional high-voltage infrastructure, and the economic benefits of using car batteries that consumers are buying anyway are undeniable. 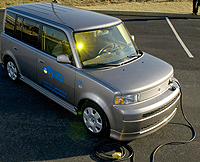 “Maybe once a year you won’t have enough power in your battery to drive where you want to drive, and you’ll have to wait half an hour before you go somewhere,” says Kempton. “In exchange, you’ll get these payments and you’ll be helping bring more renewables onto the system. That’s the deal.”

The Delaware project involves fewer than 10 cars at this point, each earning about $6 per day for the power fed back into the grid. The price will depend on external factors like the cost of natural gas, so as fossil fuel prices rise in the future a plugged-in EV might generate even more money for its owner. And a common concern, that V2G might tax the car batteries too much and shorten their lifespan substantially, hasn’t proven to be an issue to this point.

Policy makers are also getting on board. Delaware now features a first-of-its-kind law requiring utilities to buy back electricity that EVs can offer up to the grid, and an energy storage bill recently passed in California could open the door to V2G in the future. Jon Wellinghoff, the chairman of the Federal Energy Regulatory Commission (FERC) — which governs the interstate sale and movement of electricity — has also expressed support.

Still, the need for further hardware on board the cars may present an economic challenge to large-scale V2G integration. A standard EV can receive a charge but lacks the equipment necessary to send it back out. Paul Denholm, a senior analyst at the National Renewable Energy Laboratory’s Strategic Energy Analysis Center, says that issue is far from resolved.

With smart charging, a car will charge at times when demand is low or the wind is blowing.

“I get the impression that the vehicle [manufacturers] aren’t particularly interested in V2G because that’s not a core vehicle technology,” Denholm says. “That would be a lot of extra costs, and they’re in the business of selling cars, not grid services.”

The EVs coming onto the market now — including the Volt, LEAF, and Tesla’s Roadster — aren’t equipped for V2G, but Kempton says he is working with manufacturers and hopes to see that change soon. He guesses that within five years, tens of thousands of V2G-ready cars will be produced, and within 10 years “it will be a major component of the vehicle fleet.”

The logical intermediate step before full V2G adoption, most seem to agree, is the use of managed- or smart-charging practices for EVs. With smart charging, a car won’t have to feed any power back to the grid. Instead, it will charge at certain times when demand is low or when the wind is blowing the strongest. Both of those often occur early in the morning, say, between the hours of 1 a.m. and 4 a.m.

“When people get home at 5 or 6 p.m., that’s typically when the grid peaks in terms of demand for air conditioning and things like that, so it’s a really bad idea to charge right when people get home and plug in,” says Denholm. “If you’re talking about thousands or millions of vehicles, some kind of controlled charging scheme is going to be absolutely necessary.”

In this case, the technology isn’t hard to come by, with smart meters already being deployed nationwide and software that could control the car’s charge readily available. Denholm says that on the simplest level, just a basic timer could do the trick. In Ekman’s Danish study, the best schemes he modeled combined V2G with smart-charging practices to maximize the benefit to wind power integration.

Even with managed charging, though, we may be years off from EVs playing a significant role in renewable energy’s growth.

Fleet vehicles like those of the U.S. Postal Service might make a good place to start with vehicle-to-grid.

Chevrolet’s and Nissan’s EV entries won’t ramp up to full-scale production — on the order of hundreds of thousands of vehicles — for a few years, and 20,000 cars here or there won’t provide the type of grid impact that Kempton and others envision. President Obama, however, has set a goal of 1 million EVs and plug-in hybrids on the road by 2015, and last year the administration threw $2.4 billion of stimulus funding behind that goal.

And if slowly building a scattered fleet of residential vehicles won’t help the mass adoption of V2G and managed charging, there are other possibilities. Ken Huber, the senior technology and education principal at regional transmission organization PJM Interconnection — they’re the ones paying that $6 per day to the University of Delaware cars — says fleet vehicles like those of the U.S. Postal Service might make a very attractive place to start with V2G.

“They park at the same place, they are very regular in their routes, they know the amount of distance and charge that they need, and they are typically available during those periods when we need it, those 12 off-peak hours,” he says. School bus fleets, which often sit for the entire summer in a parking lot, offer another opportunity.

Such vehicle fleets could fill a need immediately. According to Huber, PJM Interconnection — which provides electricity to about 18 percent of the country’s population in 13 states and the District of Columbia — currently has only about three gigawatts of wind power out of its peak capacity of 144 gigawatts. Even now, there are periods in the early morning when the price of electricity actually becomes negative: There is too much generation and not enough demand, demonstrating the need for power storage.

Huber said that if, as planned, wind generation in the PJM system eventually rises from the current three gigawatts to almost 50 gigawatts — and if EVs in the area reach 1 million in the next five years — the goal of large-scale V2G technology will become a reality in a market that supplies electricity to 51 million people in the mid-Atlantic, Midwestern, and southern states.