Until a ferocious drought withered crops, turned rivers to trickles, and dried up municipal drinking water supplies, one of Limpopo province’s distinctions was the ample sun and good soil that made it South Africa’s premier producer of fruits and vegetables.

Another distinction was that the province’s farmers made an informal agreement to share scarce water with coal companies developing the Waterberg Coalfield that lies beneath dry central Limpopo. 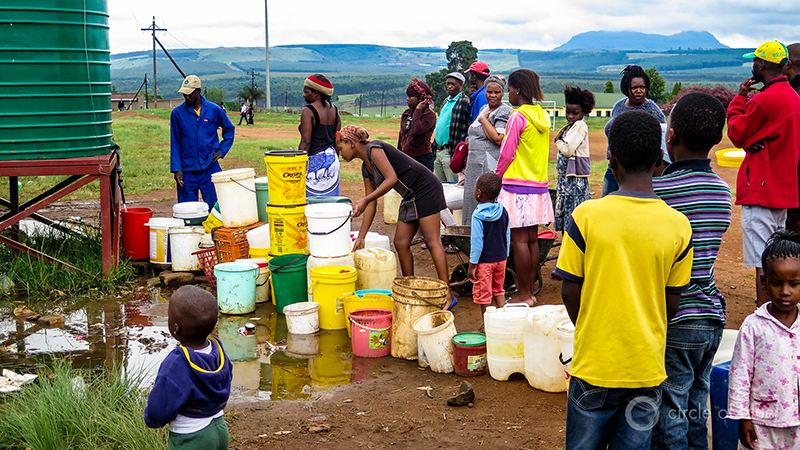 Residents of KwaZulu-Natal wait in line daily to get water from a government-supplied tank. KEITH SCHNEIDER

The drought, the most extreme in South Africa since the start of the 20th century, shattered the fragile equilibrium between the agricultural and coal sectors. Pitched street clashes between farmers and police, who back the coal interests, have broken out south of Musina, where Coal Africa proposes to build a $406 million mine in an area where some of the country’s most productive vegetable farms operate. The mine would consume 1 million gallons of water a day, according to company disclosures. Both the mine and neighboring irrigated farms are dependent on the Nzhelele River, which has dwindled to a shallow stream.

Higher temperatures and diminished rainfall, which many scientists attribute to climate change are wreaking havoc in two of South Africa’s largest economic sectors — agriculture and energy. Yet in the face of this growing crisis, South Africa’s leaders continue to display unyielding allegiance to the nation’s water-guzzling coal sector, whose 50-plus billion tons of coal reserves fuel 90 percent of the country’s electrical generating capacity and provide a third of its liquid fuels. Coal also generates hundreds of millions of metric tons of climate-changing carbon emissions annually that aggravate South Africa’s warming and drying.

President Jacob Zuma’s promotion of the coal sector, though, fails to recognize an emerging solution — the renewable energy initiatives that began during the previous administration of Thabo Mbeki. Today, 13 wind power plants and 31 solar generating stations are operating in South Africa and $6 billion has been invested in renewable energy installations. These projects, which do not pollute the air and use scant amounts of water, represent 75 percent of the new electrical capacity generated by South Africa this century, according to the most recent report by the South Africa Department of Energy.

‘There’s a drought happening. But it’s as if our government is stuck deep in the sand,’ says one activist.

Roughly 45 sizable wind and solar projects are in various stages of construction, financing, and permitting. Indeed, the country appears well on its way to reaching the national target of 6,000 new megawatts of renewable generating capacity by 2020 and 18,000 new megawatts by 2030.

During the nine-year administration of President Mbeki, who succeeded Nelson Mandela as the nation’s second black president, South Africa seemed to be preparing for an economy that discouraged carbon emissions and resource waste, and encouraged conservation. Even as Mbeki criticized global environmental summits as Western efforts to impede development in poor nations, he nevertheless encouraged elevating ecological principles to prominence in South Africa’s economic development strategy. In 2008, the year Mbeki left office, South Africa adopted a national framework for sustainable development, which called for lowering carbon emissions and water consumption.

Although the South African private sector has been steadily expanding wind and solar power, President Zuma has shown no such enthusiasm for renewable energy. The president’s last two years in office have generated fierce criticism and public protests because of his government’s faltering response to dwindling supplies of water for drinking and irrigation. Critics also have attacked his proposals for new water-consuming coal, uranium, and nuclear projects.

Activists argue that neither the coal-based energy strategy nor nuclear power are suitable for the ecological conditions and market opportunities of this century. They cite the example of the Karoo Desert south of Johannesburg, where South Africa’s uranium reserves lie. The Karoo is one of the driest landscapes on the planet, yet the first big mine proposed there would consume 1 million gallons of water a day.

A 4,800-megawatt coal-fired power plant in Mpumalanga is years overdue, billions over budget, and may not have sufficient water to operate at full capacity when completed. KEITH SCHNEIDER


“Energy is the biggest threat to South Africa’s environment — it’s a threat to our water and our economy,” said Bobby Peek, founder and director of groundWork, one of the country’s premier environmental organizations. The group is working with community organizations to stop the Colenso coal-fired plant in KwaZulu-Natal, which would siphon off millions of gallons daily from the headwaters of the Tugela River. “There’s a drought happening,” said Peek. “It’s serious. But it’s as if our government is stuck deep in the sand and doesn’t want to see what’s going on.”

Just this week, the Zuma administration announced a new program to collaborate with Iranian financiers to address water scarcity by building desalination plants in coastal cities. Critics noted that the announcement ignored the reality of the plants’ many billions of dollars in costs, or that South Africa’s credit rating is near junk status.

“There are significant difficulties from this drought,” said Dhesigen Naidoo, the chief executive of the National Water Commission, a research and science agency in Pretoria. “The drought cannot be managed the way previous droughts have been managed. In previous droughts we hadn’t factored in climate change. We are convinced that this drought is not part of a normal drought cycle that we’ve had in the past. This one is quite different. So we regard this as a drought in the climate change scenario, and our planning is working around that.”

Limpopo, about the size of Louisiana, borders Zimbabwe in South Africa’s north. In the town of Lephalale, farmers and other rural residents are locked in battles to protect water supplies from new power plants, as well as from plans to expand mining in the Waterberg Coalfield.

The president’s devotion to coal has prompted civic resistance, which is showing results.

Eskom, South Africa’s state-owned electric utility, is building one of the new coal-burning plants, the 4,800-megawatt Medupi coal-fired power station, on a stretch of dry land west of Lephalale. When its six generating units are fully operational, perhaps by the early 2020s, the plant will consume 6.9 billion gallons of water annually.

South Africa anticipated the need for a torrent of processing water for the Medupi plant by spending $1 billion to build pumping stations, water supply and storage infrastructure, and 130 miles of pipeline to tap the distant Crocodile and Mokolo rivers. But the ongoing drought is producing fresh evidence that the two rivers may not have sufficient water in the 2020s and beyond to sustain agriculture, a fast-growing population, existing industries, and a gigantic power plant now estimated to cost $16 billion to complete.

The president’s devotion to coal has prompted intensifying civic resistance, which is showing some results. The administration’s environmental approval of the proposed 1,200-megawatt Thabametsi coal-fired station, to be built near Medupi, has been suspended following a formal appeal by groundWork and Earthlife, another prominent South African environmental organization.

In April, following an appeal by Vhembe Mineral Resources Stakeholders Forum — a group of Limpopo farmers and residents — the South Africa Water Tribunal reversed a January ruling by the Department of Water Affairs and suspended COAL South Africa’s water use license to develop the Makhado mine. The ruling halted indefinitely the development of the mine.

Such defiance is not persuasive to South Africa’s president, nor to those in his administration charged with reviewing and approving Limpopo’s new mine and power plant projects. Last August, Zuma traveled to Limpopo to attend the commercial opening of the 794-megawatt Unit 6 at Medupi, the first new coal-fired generator to start in South Africa this century.

ALSO FROM YALE e360 In South Africa, Renewables Vie With the Political Power of Coal 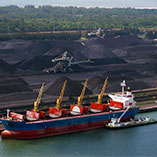 Although coal has dominated the South African electricity sector for decades, the country’s abundant solar and wind resources offer a promising renewable energy alternative. But entrenched political interests connected to the ruling party are fighting to expand coal’s role in the national economy. READ MORE

He praised the big new plant and emphasized the need to meet the country’s demand for electricity. “The energy shortage is a serious obstacle to growth,” said Zuma. “In this regard, the opening of Unit 6 is a significant achievement for the country.”

Zuma has never attended the opening of a wind or solar installation. Three months after his appearance at Medupi, Zuma delivered an address at the G20 gathering of heads of state in Turkey. In his speech, Zuma could not remember how much money is being invested to develop the first 6,000 megawatts of renewable energy in South Africa, which is 1,200 more megawatts of generating capacity than Medupi. Zuma told the G20 leaders it was $14 million. The accurate amount is $13.4 billion, or $3 billion less than the current estimated cost of completing Medupi.