Last year, the spectacle of 80 million people flocking to the faux greenery of FarmVille, a social networking game on Facebook, held particular irony for environmentalists who have ritually bemoaned low levels of public interest in biodiversity. Every traditional method and media has been tapped to penetrate this elephantine indifference, from documentaries to dire predictions. Rarely a week goes by without reports on crashing ecosystems or mass extinction, a blizzard of bad news inspiring little more than hand-wringing.

But in the spirit of joining rather than beating, conservationists have begun embracing the enemy, the very force that alienated people from nature in the first place: technology.

Social media have become the latest, hottest tools in natural history circles as scientists confront a populace that knows laptops better than landscapes. In the quest to give communities a grasp on complex ecological systems — particularly as they face decisions imposed by climate change — social networking promises to link scientists with the public, empowering naturalist armies to act on their behalf: monitoring species, observing behavioral patterns, and reporting the presence of invasives and changes in climate, vegetation, and populations.

Citizen science has migrated to the Web, emerging as a potent force multiplier for conservation.

Citizen science — natural history — has been the province of amateur enthusiasts for centuries, long before a young beetle-lover found himself in the Galapagos, flinging marine iguanas into the sea to see if they’d swim back. The popularity of the Audubon Christmas Bird Count, launched in 1900, brought new rigor to backyard observations, revealing the scientific potential of simultaneously gathering thousands of data points across widegeographical areas.

But with the explosion of cell phones equipped with digital cameras and global positioning systems, citizen science has migrated to the Web, emerging as a potent force-multiplier — and watchdog — for conservation. In May, Namibia’s government announced an SMS hotline for anonymous poaching tips: “Five fives for rhino.” After the Fukushima nuclear plant failure, Japanese citizens skeptical of government reassurances bought their own dosimeters to map radioactive hot spots on the Web. Likewise, during the 2010 Gulf of Mexico oil spill, the Public Laboratory for Open Technology and Science transformed anxiety into “civic science,” moving residents to chart the spill with digital cameras tied to kites and balloons.

The most astonishing results from environmental social networking lie in such crowdsourcing. In March, the Smithsonian put out an emergency call on Facebook for specialists to identify 5,000 freshly collected fish specimens from Guyana for export paperwork. Within 24 hours, ichthyologists around the world supplied partial or complete answers for almost 90 percent. 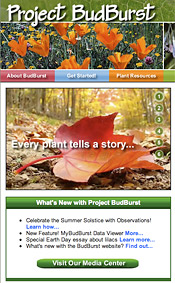 But most projects, from traditional websites to social networking services and apps, are premeditated: Cornell University’s Citizen Science Central acts as a clearinghouse for over 130. Many offer training in species identification and invite the public to post targeted observations: the number of gray vs. fox squirrels (Project Squirrel), the appearance of buds in spring and other seasonal plant phases (Project BudBurst), the migratory behavior of Monarch butterflies (Monarch Watch) or hummingbirds (Operation Ruby Throat). Others organize and analyze data online from “BioBlitzes,” intensive biological surveys conducted by volunteers with the guidance of specialists. Offering land managers and stakeholders spatially referenced databases on the presence or absence of protected or invasive species, these range from local exercises — a 24-hour “snapshot” of every species in Wisconsin’s Beaver Creek Reserve, for example — to large-scale, long-term initiatives like the Adirondack All-Taxa Biodiversity Inventory.

Such efforts may seem modest. But Cornell professor Harry W. Greene, an old-fashioned field biologist and self-described “snake guy,” regards these observations as “absolutely at the core of all biology.” Greene points out that “for most organisms on Earth, we know almost nothing.” In years past, he often received frustrating reports of snake sightings from a public uncertain about key details — length, color, markings. Now, people send a digital image. “I write them right back,” he says, “and tell them whether the roadkill in their driveway is a Massasauga rattlesnake or a northern milk snake.” He describes the outpouring of data from citizens as “revolutionary,” not only for science but for amateurs: “When you make an observation,” he says, “you put yourself into the life of the organism. You care more.” With enough anecdotal reports and photos, meaningful statistical samples can emerge.

One innovator calls social networking part of the ‘mass amateurization of everything.’

Greene and a former graduate student developed a prototype for “NatureWorm,” a social networking site designed to kindle interest in natural history on a wide scale. Investment lagged, but the niche has been filled by other opportunistic organisms, such as iNaturalist.org, an online community created by students at University of California, Berkeley’s School of Information where users can upload photos and hobnob about sightings. On a recent visit, “RussianNaturalistBrazil” had just posted an arresting image of Gongora meneziana, a fleshy, translucent red-spotted orchid found in Brazil’s Atlantic forest; Google maps pinpointed his location north of Salvador. Elsewhere on the site, a debate had broken out on the identification of a type of Indian paintbrush in California’s Wildcat Canyon.

Project Noah is a more commercial version of an environmental community, led by telecom entrepreneur Yasser Ansari, who grew up in southern California and developed a passion for poison dart frogs as a child. After studying molecular biology and bioinformatics at University of California, San Diego, Ansari collaborated on Noah (“Networked Organisms and Habitats”) with fellow students at NYU’s Interactive Telecommunications Program. Launched in February 2010, it is now available as an app, downloaded to over 100,000 smartphones. So far, participants have uploaded over 60,000 “spottings.” Recent caches feature everything from the inevitable white-tailed deer and common garden flowers (“rose,” “lantana”) to images of a red-eyed tree frog, an Arctic fox, a Plains zebra rolling in dirt, a griffon vulture in flight, and mating common Indian toads.

Contributors to Noah plot sightings on a worldwide map, earn patches (reminiscent of the Boy Scouts’), and join “Missions” — the Global Coral Reef Monitoring Network, the Gulf Coast Oil Spill Impact — to delve deeper into scientific projects. The National Geographic Society recently provided investment for new software, reposting on Facebook Noah’s “Spotting of the Week” — including a spectacular giraffe-necked weevil from Madagascar — for its 6.6 million fans. 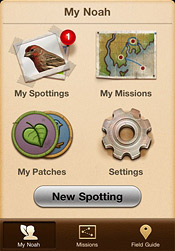 For all the emphasis on documentation, Ansari’s view of his social network has evolved. He sees it primarily as a motivational tool, part of the “mass amateurization of everything.” While his original vision was to collect data, he now suggests that Noah is “more effective at getting people excited. We’re trying to create a powerful gateway drug. If you use Project Noah and then move on to hard-core science, that’s a huge win. The data is secondary.”

Not necessarily. Project Squirrel, which has expanded countrywide from its origins in Chicago, is keeping watch on both its target species and human observers. “We’re correlating what people tell us about habitat to what the squirrels are telling us,” director Steve Sullivan says, predicting that the project may document the accuracy of citizen science and its role in stimulating passion for nature.

Project BudBurst, sponsored by NEON, the National Ecological Observatory Network, has registered nearly 12,000 volunteer observers since 2007. Participants have uploaded tens of thousands of observations on their chosen plants’ first leaf, first flower, first pollen, and other phenological phases (lilac is among the most popular), yielding datasets that have allowed scientists to extend a 50-year botanical study of Cook County, Illinois. Comparing historical data with three years of BudBurst observations has revealed that, as temperatures rise, forsythia is blooming 24 days earlier, black locust 19 days earlier, and red maple 14.

Both Squirrel and BudBurst are popular in classrooms, but lone individuals are also prolific — one Waco, Texas plant-watcher has been monitoring more than 25 species since BudBurst’s inception, including Texas red oak, Texas bluebonnet, spiderwort, and pink ladies.

Perhaps the most intriguing capability of social media involves something that goes deeper than data. The University of Virginia’s Chesapeake Bay Game is an interactive computer simulation with the power to change minds. Beginning in 2000, it plays out over a 20-year horizon, allowing teams to take on the roles and responsibilities of oystermen, crabbers, crop and dairy farmers, real-estate developers, and policy-makers, everyone with an impact on one of the world’s most endangered watersheds. As teams make decisions based on economic and regulatory restrictions, determining how much land to cultivate or how many crabs to trap, they watch the real-time, long-term consequences of their choices playing out. Crucially, “the game is politically neutral,” says David E. Smith, professor in U. Va.’s Department of Environmental Sciences.

On Earth Day this year, teams from seven Chesapeake Bay-area universities played, each representing a major basin — York River, James River, the Eastern Shore, etc. It was a sobering experience. At the end, a College of William and Mary biology professor acknowledged that despite players’ best efforts, “the quality of the bay went down.”

The game is impressively accurate: Its recent iteration encompasses tens of thousands of data points, and IBM has selected it for the World Community Grid program, harnessing over a million volunteers’ computers to crunch numbers. Philippe Cousteau, grandson of the oceanographer, is partnering with the university to adapt it for other ecosystems, from Australia to Arizona. He foresees a day when younger students can input real data to model their backyards and lobby their parents — “Hey, mom and dad, let’s not use fertilizer on the lawn.”

Today’s social media may indeed spark a rebirth of natural history, but none have yet moved climate change or biodiversity loss forward very far forward on the political agenda. There are tremors: In 2009, 350.org, agitating for action on climate change, used social media to organize more than 5,000 events in some 180 countries, in what CNN called “the most widespread day of political action in the planet’s history.” Last year, 350.org mobilized tens of thousands of people against offshore oil drilling, holding hands across 900 beaches. Avaaz, the Web-based social justice movement, has inspired more than a million to sign a petition to protect bee populations by banning neonicotinoid pesticides in the U.S. and EU.

Meanwhile, the environment waits for a software wunderkind to find the social formula that may lure a fickle public to fall in love with the real world, not a fake one.