The Swift Boats are long gone. The Mekong delta is peaceful now. Vinh Long, where Americans fought skirmishes with the Vietcong, is now a holiday resort. The Westerners heading off into the remoter regions of the enormous delta point nothing more threatening than a camera — and the only ambush they face is at the hands of traders at the nearby Can Tho floating market.

Vietnam is now a fast-growing, Westernizing economy. But, paradoxically, peace and prosperity is currently the biggest threat to what is one of the world’s last great wild rivers. Almost half a century of wars in southeast Asia kept engineers away from the Mekong. Their plans for giant hydroelectric dams on the river gathered dust. But all that is changing. And on the delta, they have reason to fear the consequences, for the tens of millions of people who rely on the river’s wildness for their supper could soon see their main source of protein dry up.

Last October, Chinese engineers finished construction of the Xiaowan dam on the upper reaches of the River Mekong, in the remote southern province 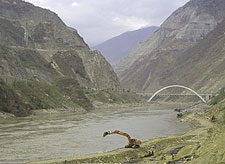 International Rivers
Completed last year, China’s Xiaowan dam will for the first time catch the great Mekong flood that rushes out of the Himalayan mountains.

of Yunnan. The 958-foot Xiaowan dam is the world’s tallest, as high as the Eiffel Tower. Starting this summer, the hydroelectric dam will for the first time catch the great Mekong flood that rushes out of the Himalayan mountains, and then gathers monsoon rains and snowmelt as it surges through the steep gorges of Yunnan. The reservoir will eventually be 105 miles long. The first electricity will be generated next year and help keep the lights on as far away as Shanghai, more than 1,200 miles to the east.

As China rushes to industrialize, a total of eight hydroelectric dams are planned on the Mekong. By 2014, engineers will have completed the Nuozhadu dam, which will be less high but will have an even larger reservoir. The Mekong is destined to become China’s new water tower and electrical powerhouse.

This cascade of dams will be able to store half the entire flow of the Mekong as it leaves China and rushes downstream toward Burma, Thailand, Laos, Cambodia, and Vietnam. In the future, the annual flood will be released gradually as turbines are switched on and off to supply year-round electricity. From then on, the river will rise and fall at the whim of engineers rather than nature.

In late May, a report from the United Nations Environment Programme warned that these dams are “the single greatest threat” to the future of the river and its fecundity. The new regime will largely eliminate the river’s annual flood pulse, one of the natural wonders of the world, and wreck the ecosystems that depend on it.

The dams will largely eliminate the Mekong’s annual flood pulse, one of the natural wonders of the world.

Aviva Imhof, campaigns director at the International Rivers Network, said that the dams will cause incalculable damage downstream. “China is acting at the height of irresponsibility,” said Imhof. “Its dams will wreak havoc with the Mekong ecosystem as far downstream as the Tonle Sap. They could sound the death knell for fisheries which provide food for over 60 million people.”

Experts in downstream countries have been reluctant to criticize China’s policies. But Professor Ngo Dinh Tuan from Hanoi Water Resources University told Vietnamese reporters last month, “If China builds dams to serve power production, the first impact would be a remarkable reduction of aquatic resources. It would be very dangerous for people who live in the lower section.” 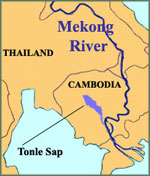 Yale Environment 360
CLICK TO ENLARGE: The Path of the River Mekong

Until now, the waters of the Mekong have been a natural resource for humans and nature alike — on a par with the Amazon rainforest. The 2,800-mile river sustains the world’s second-largest inland fishery, a mainstay of the region’s economy for millennia. It makes the Cambodians, who are among the world’s poorest people, among the best fed. It is a direct result of the intensity of the river’s summer flood, and in particular of one feature of the flood — the river that runs backwards.

For seven months of the year, the Tonle Sap flows from a lake in the center of Cambodia and joins the main river in front of the royal palace in Cambodia’s capital city, Phnom Penh. But each June, that downhill flow halts, and for five months — until November — the river reverses. This happens because the summer floods increase the Mekong’s flow 50-fold. So much water comes coursing down the Mekong that the river’s main channel cannot contain it.

The water has to go somewhere, and it backs up into the Tonle Sap. The tributary flows back upstream for some 125 miles into its lake, which expands hugely, flooding surrounding forests. At the height of the monsoon season, this reverse flow swallows a fifth of the Mekong’s raging waters, making the tiny Tonle Sap for a while one of the world’s biggest rivers, albeit flowing backwards.

The Mekong is a reminder of how the world’s rivers used to be before the dam-builders got to work.

During this flood, the submerged forest around the lake becomes the nursery for the Mekong fishery. In the silty water among the tree roots, billions of fish fry grow into fat adults. The flooded forest of the Tonle Sap is one of the most productive ecosystems on Earth. And each November, as the Mekong flood abates, the Tonle Sap turns, the lake empties, and the fish swim out. To mark this annual event, Cambodia has held a huge water festival in Phnom Penh since the 12th century. Over the ensuing months, the fish will migrate for hundreds of miles up and down the Mekong — filling nets that feed tens of millions of people. Two-thirds of the fish in the Mekong begin their life in the Tonle Sap.

The most extraordinary product of this fishery is the giant catfish. The protected species grows up to three meters long and can weigh a third of a ton. Its numbers are declining, but it still lurks in huge hollowed-out pools on the river bed, some of them 400 feet deep, and occasionally turns up in the nets that fishermen put across the Tonle Sap.

This riverine cornucopia happens under the eye of the great temples of Angkor Wat. These remains of an ancient civilization that prospered here a thousand years ago sit on the lake’s north shore, on the fringe of the flooded forest. It was the Mekong fishery, centered on the lake, that sustained this empire.

The Mekong is a reminder of how the world’s rivers used to be before the dam-builders got to work. Two-thirds of our rivers today, including most of the largest, have dams holding back their natural flood pulses on their main channels. China has already dammed the other major Asian rivers that flow out of Tibet, including the Yellow River and the Yangtze, which is now stopped by the Three Gorges Dam.

They are tamed, but much less productive as a result. The Mekong is the exception. No river on Earth has such variation in flow. Only the Amazon has greater biodiversity. Only the Amazon produces more fish.

There is scarcely a mile of riverbank along the Mekong where nobody is taking fish. And yet the fishery keeps providing. Some 60 million people eat or draw their income directly from the river. They include three-quarters of the population of Cambodia where, according to Oxfam, “river fisheries make a bigger contribution to economic well-being and food security than in any other country.”

The precise effect of China’s dams will depend on how they are operated. But according to operating instructions seen by Western hydrologists, the dams are intended to cut flood-season flow on the lower Mekong by a quarter — enough to halve the flood pulse in Phnom Penh. Hydrologists are divided about whether this is enough to end the reverse flow of the Tonle Sap. What is certain is that it will drastically reduce the amount of water backing up into the flooded forest, which will dry out — with severe consequences for the Mekong fishery.

The construction of the dams is a political as well as an ecological travesty. China is blocking the river without any prior consultation with its neighbors. In 1995 Vietnam, Cambodia, Laos, and Thailand — the four downstream nations on the river — formed the Mekong River Commission as a forum to consult on the river’s future. China never joined. It still refuses to. And it has never even discussed its dam plans with the commission. It is a vivid example of China’s disregard for its neighbors, who are too scared of Big Brother’s clout to speak out.

China is not alone as an upstream bully on the world’s great international rivers. Ask the Iraqis about Turkey’s dam construction on the Tigris and Euphrates, or the Mexicans about the U.S. on the Colorado. We badly need international law to protect downstream nations — something the U.N. agreed was necessary a decade ago but has never acted on. But even more, we need international initiatives to protect the ecological integrity of the world’s last great wild rivers. Starting with the Mekong.