The mood among the planners, architects, and theorists gathered at the International Conference on Climate Change and Urban Design in Oslo last September was, despite the heavy gray autumn skies, quite buoyant, inspired by a feeling that their time had come.

In the 1980s, exasperated by what they considered the excesses of American-style suburban development and its low-density “anonymous” subdivisions, and disenchanted by Corbusier-inspired large-scale high-rise housing blocks, they had begun proselytizing for a return to the scale and density that had given European cities, towns, and villages their distinctive character — compact development that did away with single-use zoning, isolating cul-de-sacs, and looping roads made for cars and not pedestrians. They hoped instead for a return to developments where business, industry, shops, and residences shared a matrix of meandering streets that were walkable, bikeable, and public transport-centered — developments that were socially and economically diverse and that provided residents with “a sense of place” and “celebrated local history, climate, ecology, and building practice.”

They had not had much luck in getting their theories put into practice. They were accused of being tediously nostalgic. And besides, land outside of cities was plentiful and relatively inexpensive, and home buyers seemed reluctant to trade in their dreams of big houses with three bathrooms and a front and back yard.

Not that there weren’t already some remarkable examples of new urbanism. Works in progress included compact, mixed-use, pedestrian-, bicycle-, and transit-friendly “urban extensions” underway in Amersfoort, the Netherlands; in Hammarby Sjostad outside of Stockholm; and in Adamstown, outside of Dublin. The UK had proposed ten “eco-towns” to be built across England. 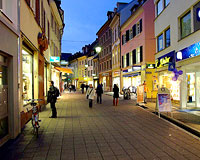 While many German cities have designed pedestrian-only streets, Freiburg set aside an entire district that has steadily expanded. FLICKR

The French government had announced plans to develop its own low-carbon suburbs it called “villes durable.” As early as 1992, Freiburg, Germany, had committed itself to preserving the character of its medieval city center by keeping sprawl at bay, resulting in the 5,000-home Vauban suburb that is an urbanist’s dream; in Vauban, 65 percent of the energy is solar or produced by an efficient central heating plant; only 150 of every 1,000 homes has a car (compared with the U.S. average of 640 cars per 1,000 homes); and two-thirds of all trips are made on foot or bike.

But the delegates to the Oslo conference, which was sponsored by the Council for European Urbanism, believed they could move beyond these limited pioneering efforts by impressing the still skeptical with hard science: New data demonstrated that increases in energy consumption and CO2 emissions are indirectly proportional to population density. The built environment, it turned out, was responsible for more than half of greenhouse gases. And low-density building was worst of all. From longer driving times to the expansion of energy, food, goods, and services distribution systems, sprawl undermined the efficient use and delivery of resources. And across Europe, urban sprawl was rampant.

A nearly iconic fact of life in the United States, urban sprawl had been slow to evolve in Europe. While sprawl was not unknown — Paris, London, Brussels, every major city has long had outlying rings of lower density development — most European cities had, even late into the 20th century, remained far more compact than their American counterparts. They were still places where people walked or took public transportation to local shops, restaurants or theaters. That this is no longer the paradigm — that cities from Luxembourg to Prague, from Madrid to Istanbul, are experiencing accelerating sprawl and its increased automobile traffic, CO2 emissions, energy consumption, land fragmentation, natural resource degradation, watershed damage, farmland decline, and social polarization — has become a major concern across the continent.

Yet Europe’s urban sprawl has had a counterintuitive streak: it has happened during a period of declining population. Over the last 20 years, many eastern and western European cities have expanded their built areas by 20 percent while their populations have increased an average of only 6 percent. Over that same 20-year period in Europe there have been four times the number of new cars on the road as the number of babies born. Over the next 20 years the number of kilometers traveled in urban areas will increase 40 percent, an increase that will negate any expected gains in fuel efficiency, and make reaching Europe’s Kyoto goals of reducing CO2 emissions nearly impossible.

All of this troubles the European Union and it should, since much of it, the EU admits, is its own creation. Sprawl, the EU recognizes, has followed the money — its money. EU investments in transnational regional growth following the member states’ economic integration, while intended to level the playing field, in the end favored capital cities over smaller cities and towns. Improved transport links — highways designed to accommodate increased freight traffic — have led to American-style intercity corridors built up with new industrial and commercial developments. Auto-centric suburbs with low-density housing tracts and shopping malls have followed, and public transit has not been able to keep pace.

In the 1990s, abetted by a much expanded highway system, Madrid’s urbanized land area increased by 50 percent compared with 5.4 percent in the rest of the EU. During this same period the area’s population grew by only 5 percent.

In the newest EU countries, those in Eastern Europe that had been communist, the changes have been even more drastic. Central planning demanded high-density housing and public transit. State-owned agricultural land was not open for development. In Romania, for instance, the Ceausescu government had even demolished houses to free up land for apartment blocks. With the end of Ceausescu’s rule, agricultural land was returned to its original owners and a “chaotic patchwork” of housing plots began to sprawl outward from the cities with little regard for planning or environmental protection.

With its entry into the EU in 2007, Romania’s economy grew 5.7 percent, and the year after, 7.5 percent. This economic development drove residential construction up 29.3 percent in 2007, and along with it, the number of cars — up 27 percent. This growth has become a great cause for concern among environmentalists, as Romania’s extensive forests are some of the least disturbed habitats in Europe.

Via Baltica will pass through the marshes of Biebrza in Poland, one of the few natural wetlands left in Europe. INVESTMENT AND DEVELOPMENT AGENCY OF LATVIA

irreversible effects of its sprawl. Natura 2000, the EU’s network of natural reserves, is increasingly finding urban sprawl encroaching on its sites and new transit corridors running through them. Via Baltica, a planned road network connecting the Baltic States and Finland to the rest of the EU will cross through valuable forest and marsh lands, including the Augustow and Knyszn Primeval Forests and the marshes of Biebrza in Poland, one of the few natural wetlands remaining in all of Europe.

European governments — as well as some in India and Asia — have begun turning to them in an effort to forestall further unsustainable growth, reclaim the lost primacy of their cities (along with their sustainable density and scale), and deliver a built environment with a much diminished carbon footprint.

The sense of vindication at the Oslo conference was tempered by the realization that they now had a responsibility to find the money and put it on the line. It’s one thing to talk about “walkable and bikeable” places, but what are the practical essentials of a carbon-neutral urbanist town and how does one go about developing one?

One thing everyone agreed on was that the end result was only going to be as good as the planning process that preceded it. Before ground was broken on the first foundation, long-term financing of the project had to be in place, public transportation should be ready, connections to established communities had to be assured. Where were the residents going to shop, work, go to school, church, the movies?

“Townmaking,” one planner assured me, “is a complicated business. Without a guiding authority you’re not going to get the necessary level of sophistication. It’s necessary to have a long-term master plan that over time continues to add value to the development.”

For the new urbanists, building an eco-town is not a matter of building “green” buildings. For some, in fact, green buildings are non-starters, taking 25 to 65 years to recoup the energy used to build them; and once built, they can become quickly obsolete, saddled with already out-of-date technology.

“Everyone gets seduced by the ‘green bling,’” Stephen Platt of Cambridge Architectural Research told me. “Making the houses energy-efficient is the easy bit. The key problem is making this a long-term socially acceptable place where people will want to live and prosper.”

More important is creating places that, like Vauban, encourage people to change their unsustainable behaviors and then enable them to do it.

It was a lack of clear planning — as well as politics — that has mired the UK’s proposed eco-towns. The number of proposed developments there has been gradually whittled down to a handful. The French efforts to create “villes durable” have yet to get underway, but they have begun by requesting proposals for projects — “not ‘cities in the country,’ but places that will interlock with the existing heritage.” Five to seven will be chosen that together will have to provide housing for some 50,000 people.

From the EU’s standpoint, the hope is that national and local governments initiate planning processes that will rein in sprawl. The urbanists’ hope is that concerns for global warming, as well as the global recession, have people looking for ways to change their economically profligate and carbon-costly habits.