California is the number one U.S. state for solar power generation — not a surprise. The country’s most populous state, with an inclination for progressive environmental policies also happens to enjoy sun in abundance.

What state might be number two? Surely some other large southerly state. Arizona? Maybe sunshine-state Florida?

Not even close. Number two for solar electric power, and number one in total solar installations on a per capita basis, is small and not-so-sunny New Jersey, more known environment-wise for its abundance of Superfund sites. What’s perhaps most remarkable is how quickly the state got to the runner-up spot, from six solar installations only seven years ago to 4,340 today. Even in the throes of the recession, solar installers (120 of them today, versus two at the turn of the millennium) are reporting booming business. 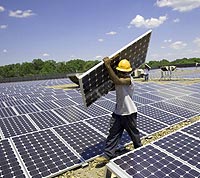 Getty Images
In the last seven years, 4,334 solar installations have been built in New Jersey, including this rooftop project at a Hillsborough department store.

“It’s just really taken off,” says Dan Potkay, president of New Jersey-based Brite Idea Energy, a solar installation company. Solar panels are not only appearing on residential rooftops, but on schools, churches, convention centers, and gyms, and as electricity-generating roofs over stretches of paved parking lots. Ground-mounted farms of solar panels are even planned for at least two of those infamous (albeit now cleaned-up) New Jersey Superfund landfills.

That all still pales in comparison to the solar revolution in Germany. Since it began a major push in 2000, Germany has become the most solar-powered nation in the world. With about one-fourth the United States’ population, it has six times more solar installed, including more than 300,000 residential rooftop systems, along with multi-megawatt commercial systems. That amounts to half the world’s total solar capacity — and in a country that enjoys sunshine about on a par with Oregon.

There’s a lesson here. The solar booms in Germany and New Jersey were not about abundant sunshine, but about subsidies. Both the European nation and the northeastern U.S. state kick-started their programs by providing early adopters with solid guarantees of economic returns on their investments. Taxes were not raised to accomplish this. Instead, utilities were allowed to raise rates minimally on all rate payers in order to subsidize those who were ready to move on installing solar systems.

In theory, subsidized sales lead to growing manufacturing scales and falling costs and, eventually, a day when renewables can compete directly with dirtier, and often imported, fossil fuels. Solar remains expensive compared to fossil-fuel-based energy, but theory and reality have continued to converge, with prices dropping by about 20 percent with each doubling of world production, moving steadily toward parity with dirtier fuels.

In a world threatened economically as well as environmentally by rising greenhouse gas emissions, dozens of other nations and several U.S. states have also begun to turn to various subsidy schemes for renewables, many of them using Germany’s approach as a model.

Although it also began with a version of straight-up subsidies, New Jersey has turned to a different approach, issuing credits that can be traded like stocks or bonds on a free-floating market. A few other states, and Great Britain, have attempted more modest versions of this market-based model, but New Jersey’s is the most aggressive attempt yet. And while the state’s solar boom is still on, the effort is too new for anyone to know if the approach will prove as successful as Germany’s over the long run.

The solar booms in Germany and New Jersey were not about abundant sunshine, but about subsidies.

The Germans built their world-beating program for solar and other renewables around a direct subsidy called a feed-in tariff. The approach issimple and straightforward: install solar panels on your roof, pump the power into the grid, and for 20 years you’ll get a guaranteed payment for each kilowatt hour you feed in; with solar, that’s presently about five times the going wholesale rate for nuclear power. Wait a year or two to install your system, and, assuming solar costs have fallen, expect a slightly smaller payment, although still a level and predictable sum.

Since Germany began its aggressive push, several other nations, including 17 other European states and more than 20 other nations around the world have adopted or announced feed-in tariffs, including, just weeks ago, China. The province of Ontario and a small scattering of U.S. states and even two American cities have adopted versions of the tariff approach.

Program designs, though, vary by nation, state or province, or city. Some attempts have been more successful than others.

Spain offers a bit of both triumph and trouble. In 2007 it mandated high tariff payments that turned out to be so generous that they quickly blew up a solar bubble. Although the government originally projected that the program would lead to 400 megawatts of installations by 2010, the program’s first 18 months saw 3,000 megawatts installed in the sunny nation. With no provision to automatically step down the tariff if it proved to be overly generous, Spain almost instantly blew past even Germany, becoming the world’s largest solar market for 2008, but at a cost to utilities of some $26 billion.

The world’s solar panel manufacturers, including a host of new companies in China, went boom mode themselves, cranking out shipments just for Spain that were large enough to fill entire container ships. But because costs for the program were rising far more than planned, by the summer of 2008 the Spanish government announced it would cut the tariff by 30 percent. It also put a firm cap of 500 megawatts on installations for all of 2009. Boom became sudden bust. In the midst of a developing world recession, 20,000 jobs in Spain’s nascent solar industry vanished.

In North America, tariffs have been slower to take off. But this year Ontario modified a modest existing tariff program to make it more attractive. And the city of Sacramento’s municipal utility has a limited program, as does the municipal utility for the city of Gainesville, Florida. Vermont, Washington, and California have instituted tariff programs at the state level (but in California only for commercial-size projects), and several other states are discussing this approach.

Feed-in tariffs aren’t the only subsidies now in play in the United States. There is no national tariff program (a bill has been introduced in Congress, but passage seems unlikely), but the 2009 stimulus bill extends a hefty 30 percent federal tax credit to solar customers through 2016. Commercial installations also can be depreciated for tax purposes on an accelerated basis.

Solar Siedlung
More than 300,000 residential solar rooftops are installed in Germany, including this so-called “solar village” in Freiburg.

Among the states, which regulate their own electric utilities, there’s a dizzying hodgepodge of approaches to providing solar and other renewable energy incentives, of both the stick and carrot variety. Stick-wise, more than two dozen states have developed “renewable portfolio standards” that require their utilities to hit certain targets — x percent of generation from renewable sources by year y — for instance. A few offer rebates on installed solar systems; in California, for example, homeowners are eligible for rebates under the state’s “million solar roof” initiative.

Most states allow “net metering,” meaning utilities must buy back unused power (electricity generated, say, on an afternoon when a house is unoccupied). It means that the owner’s meter can, essentially, spin backwards when there is excess power. (Although in some states the owner receives only the wholesale, not retail, rate; in general a monthly or annual electric bill can only go down as far as zero owed).

New Jersey’s continuing solar boom depends most heavily on its alternative approach to subsidies. When the state kicked off its solar program in 2002, it relied on a small “societal benefits” charge on all ratepayers’ bills to provide a simple, straightforward rebate that amounted to about 60 percent on solar installations, combined with a full retail net metering (backwards-meter) mandate. But by 2007, the program had become so popular that it was overwhelming available funds.

In the hope that market efficiencies could help control costs over time, the state has turned not to a tariff-style guarantee, but to a complex approach that relies on a floating, market for tradable solar renewable energy credits (SRECs).

An oversimplified version: install a solar system on your roof (or install a commercial system on a warehouse or in a field) and each year you’ll earn SRECs based on how much power your system generates annually — one credit for each 1,000 kilowatt hours. You can then turn around and sell your credits back to companies that generate power for the state’s grid. The companies can use the SRECs to help them meet state renewable portfolio standards that steadily ramp up to a mandate requiring that 22.5 percent of their energy come from renewables by 2021.

The credits are actually sold by brokers on an electronic market, like stocks or bonds, at whatever price the market will bear. At the moment, the market is bearing a fabulous price. It takes a calculator to work through the complexities, but with SRECs currently selling for just under $700, and the federal tax credit as well as a reduced state rebate in play, a homeowner in the state can pay for a solar system in four years or less.

After the system is paid for, there’s the promise of not only free, clean energy but of SREC profits for years to come. (SRECs are expected to decline in value over time, but could still be worth multiple thousands of dollars annually to the owner of a residential solar system, and far more to owners of large commercial installations.)

Some other states, including Maryland, Delaware, and Pennsylvania have also begun to turn to SRECs, although so far those programs are providing a far less generous payout: in the $200 to $250 range. (The divergence appears to be occurring mostly because New Jersey is wielding a bigger stick, assessing a high “alternative” charge as a de facto penalty if companies do not hit their benchmarks.)

In an email, Doyal Siddell, chief spokesman for New Jersey’s Public Utility Commission suggested that his agency had decided the SREC approach was a way to avoid the “significant downsides” of German or Spanish-style tariffs “with regard to cost exposure to ratepayers, budgeting for uncertain expenditures and… inflexibility in adjusting to market changes such as falling equipment costs.”

But at least one industry insider is skeptical that it will be a real improvement.

Dolores Phillips, executive director of the Mid-Atlantic Solar Industries Association, a regional trade group, worries that New Jersey’s SREC market makes the economics of going solar too unpredictable, suggesting that the alluring SREC-based economics of 2009, especially at New Jersey’s high rates, could be a “fluke.”

Phillips pointed to a May, 2009 report by the U.S. Department of Energy’s National Renewable Energy Laboratory (NREL) that cited “stability and certainty” as key benefits of feed-in tariffs. In particular, the NREL study noted that since risk raises the cost of financing, a safe, predictable income stream means lower costs overall.

Clearly, properly-designed, feed-in tariffs had the desired effect in Germany, ramping up manufacturing and, in doing so, driving down costs. It’s simply too soon to tell if the U.S. states moving toward a market-based approach are onto something better.