Look up into the tree canopy of the urban tropics in South Asia, Australia, or equatorial Africa and as often as not you will find masses of Pteropos fruit bats, hanging from the branches like so many furry stalactites. Their forests cut down by bulldozers, torched by slash-and-burn farmers, or desiccated from a disrupted climate, fruit bats increasingly intrude upon human communities, adapting to the orchards and cultivated fruit trees of the cities, farms, and suburbs that have subsumed their forests.

With those bats come diseases that spread to humans, and a growing body of research suggests that their microbes — as well as other pathogens that jump from animals to people — are spreading more rapidly because of climate change and deforestation.

The ongoing deforestation of African rainforests, for example, has increased such encounters, by bringing humans closer to infected bats. Roughly 4 percent of Congo basin rainforests were lost during the 1990s alone. With habitat loss devastating many animal species hunted for game meat, impoverished villagers have stepped up their predation on survivor species such as fruit bats. 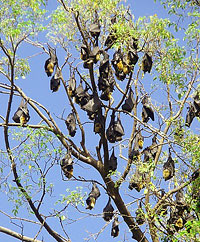 The dislocation of fruit bats because of deforestation has increased encounters between humans and the bats — and the pathogens they carry.

In Congo in 2007, for example, local hunters slaughtered thousands of fruit bats with their shotguns, and villages were “literally inundated” with blood-bathed bat corpses, according to scientists. As a result, 260 people became infected with the deadly Ebola virus, which scientists believe had lived quietly in the bats and then was transmitted to the villagers exposed to the bats’ blood and other fluids. A total of 186 people perished. Scientists in Gabon and Congo have traced that Ebola outbreak to a massive migration of fruit bats into the stricken villages just prior to the epidemic.

“When you disrupt the balance, you are precipitating the spillover of pathogens from wildlife to livestock or humans,” says the Wildlife Trust’s veterinary epidemiologist and public health expert, Jonathan Epstein.

Other bat-related outbreaks of deadly diseases in humans have occurred in recent years in Malaysia and Bangladesh, sometimes because of changes in weather patterns or in land use as human settlements and agriculture increasingly encroach upon forested areas. And there is growing evidence that rising temperatures and unusual rainfall patterns have already expanded the risk of diseases carried by insects, a phenomenon that is expected to worsen as the world continues to warm this century and insects shift their ranges to higher latitudes and elevations.

These developments have given rise to a growing consensus among many wildlife biologists and public health experts who advocate a new approach to conservation and public health called “conservation medicine,” which promotes interdisciplinary collaborations to expose the links between ecosystems, the health of wildlife, and humans that lead to the emergence of new pathogens.

In recent years, for instance, scientists have been ferreting out the connections between climate change and human health. They’ve found that spasms of cholera correlate with changing sea surface temperatures and that diarrhea outbreaks arrive as the mercury climbs. They’ve discovered associations between seasonal weather patterns and malaria that are so strong that outbreaks can be predicted with the weather forecast.

The pace of pathogens jumping from animals into humans has quickened, experts say.

The so-called meningitis belt in West Africa has expanded in recent years, thanks to land-use and climate changes, the Intergovernmental Panel onClimate Change (IPCC) notes. Malaria has newly established itself in the East African highlands as the region warms. The destruction of thousands of acres of Peruvian rainforest has created new mosquito habitat and unleashed more than 120,000 cases of malaria in the late 1990s, Stanford University’s Amy Vittor and colleagues have found, compared to fewer than 150 a year in the early 1990s.

And future climate change could intensify the burden of these diseases in some places, allowing still others to annex new territory. According to the IPCC’s 2007 assessment, a 2- to 5-degree F increase in the average global temperature could lead by 2100 to longer seasons of malaria transmission in Africa and a 5 to 7 percent extension of the disease into higher latitudes. Coupled with projected population growth, the changing climate could nearly double the number of people at risk of infection from dengue fever by 2080.

Humans have been acquiring microbial pathogens from animals and insects for millennia, from the measles we got from goats to the malaria bestowed upon us by mosquitoes. But in the past six decades, the pace of pathogens jumping from animals into humans — collectively dubbed “zoonoses” — has quickened, experts say.

The transmission of the filovirus Ebola from bats to humans illustrates the complexity of the spread of these diseases and its relation to climate change and land disturbance. Simple bat-human contact isn’t sufficient for the filovirus Ebola to erupt.

The destruction of Peruvian rainforest has created new mosquito habitat and unleashed more than 120,000 cases of malaria.

“It’s a cascade of events” that bring bats, apes, and humans together in unusual ways, aggravated in part by “unique climatic conditions,” says World Health Organization zoonoses expert Pierre Formenty. According to a NASA analysis of meteorologic satellite data, Ebola outbreaks correlate with heavy rains at the end of a period of intense aridity. Extremely dry conditions force some fruit trees to defer fruiting. When the rains come and the stricken trees put out fruit, all manner of fruit-starved species, including Pteropus bats and apes, gather to feast. Large numbers of creatures concentrated under newly fruit-heavy trees provide microbes such as Ebola a prime opportunity to jump from one species to another. And once Ebola starts circulating heavily in a new species such as apes or bats, it can readily be transmitted through infected blood and other fluids to humans.

Whether the warming planet will aggravate the unusual rainfall patterns that set the scene for Ebola outbreaks remains unclear. While experts in conservation medicine have made great strides delineating the links between climate and disease, projections about how disease patterns will shift as the climate changes are still nascent. Worryingly, however, a trend toward aridity has already been noted across African rainforests.

There’s much we can do to diminish the burden of a disrupted disease landscape, with prompt treatment and well-planned prevention.

Abnormal patterns of human-bat contact, aggravated by intensified agriculture, led to the emergence of the lethal Nipah virus in Malaysia. Thevirus, which scientists isolated inside fruit bats, first erupted at an industrial-scale pig farm in 1998. Scientists suspect that the bats fed on the cultivated fruit trees overhanging the pigs’ troughs, contaminating the pigs with virus-infected feces, urine, and saliva. The pigs fell ill first, their huge numbers rapidly amplifying the virus and enabling it to jump to the local farmers. Forty percent died of acute encephalitis within a matter of weeks. Nipah virus has also emerged in South Asia and now erupts in Bangladesh nearly every year, killing 70 percent of the afflicted. By 2007, 123 people had been felled.

And it’s not just bats. In the United States, environmental disruptions have allowed microbes from rodents and birds to find their way into humans, too. During the late 1990s, two novel diseases emerged in the United States: hantavirus and West Nile virus. Scientists suspect the arrival of the new scourges are the result of the changing climate, and, indeed, so far both diseases have been linked to weather patterns that are expected to intensify as the world warms. Concern is high that more such novel diseases may emerge as the climate continues to change.

A never-before-seen hantavirus struck the southwestern United States in the early 1990s, after an El-Nino-associated cycle of early season heavy rains ended a six-year-long drought. According to Paul Epstein of Harvard Medical School’s Center for Health and the Global Environment, the drought had reportedly winnowed the ranks of owls, snakes, and coyotes while the rains fattened supplies of pine nuts and grasshoppers, both of which allowed the local deer mice population to explode ten-fold. Deer mice overran local communities, and hantavirus, which may have been living quietly inside rodent populations for years, exited through their feces and into the dry air and the airways of the people. The scourge broke out again in 1998, following a 1997 El Nino event. As with Nipah virus, hantavirus now regularly plagues the southwestern United States. Hantavirus pulmonary syndrome kills 37 percent of its victims; by 2007, 165 had died.

West Nile virus, transmitted by mosquitoes from birds to humans, first emerged on American soil in 1999 and its arrival similarly has a “very strong climate trigger,” Harvard’s Epstein says. According to a recent report by scientists from New York University and Harvard, cases of West Nile virus between 2001 and 2005 increased by 50 percent with every 9-degree F rise in the mean maximum weekly temperature, and 33 percent after heavy rains. Warmth and heavy rain tend to lead to an abundance of the Culex mosquitoes that transmit the microbe.

Between 1999 and 2007, the Centers for Disease Control logged over 27,000 cases of West Nile virus infection, some 8 to 10 percent of which end in death. With the correlation between climate and West Nile virus already evident, researchers speculate that the warmer temperatures and heavier downpours that climate change models predict will likely increase the burden of West Nile virus in coming years.

Human health, of course, is a complex beast. Much of the impact of these changes will depend upon factors other than the climate: our own population growth, our immune systems, and the care with which we craft our health systems and distribute medical goods. There’s much we can do to diminish the burden of a disrupted disease landscape, with prompt treatment and well-planned prevention. The burden of some diseases may even decline.

But no sophisticated diagnostic method nor high-tech medical care can save us from new pathogens, which by definition cause indeterminate illness of uncertain origins. This fall, the Institute of Medicine called for greater political commitment and funding for global surveillance of emerging zoonoses.

The trouble is, of the estimated one million unique viruses carried by vertebrate species — and thus potential zoonotic threats — a mere 2,000 have been described. Surveillance of wildlife health, which could provide early warning of zoonotic pathogens on the move, is minimal, particularly in those parts of the world where contact between wild species and people are most intimate.

Fortunately, most of the time, microbial forays into new species are either benign or unsuccessful, extinguished by the new host’s immune responses or by the microbe’s own failure to thrive. “Only a tiny fraction are going to become human pathogens,” says Centers for Disease Control medical ecologist James Mills. And even with new zoonotic pathogens cropping up with increasing frequency, the actual number of deaths from the diseases they cause is still miniscule, compared to old killers such as malaria.

But the potential risks of new pathogens adapting to the human body are indisputable. And it only takes one. After all, not many people died when a lentivirus of Cameroonian chimps first jumped into humans sometime in the 1930s, even as it carved a foothold in the rapidly growing colonial African city of Leopoldville. But then it evolved into a form that efficiently preyed upon humankind. Between 1981 and 2007, 55 million souls were infected, and to date the disease it causes — AIDS — has killed more than 25 million.