This year’s UN climate negotiations are in Durban, South Africa. Many delegates will already be looking forward to the chance of going on safari after their labors, visiting Kruger National Park or one of the country’s other magnificent game reserves. But I have another suggestion. Visit the enemy. Just two hours’ drive up the Indian Ocean coast from Durban is Richards Bay, a huge deep-water harbor that is home to the world’s largest coal export terminal.

Anyone seduced by the conference exhibition halls in Durban, filled with the latest renewable energy technology, will get a rude awakening at Richards Bay. For it may tell the real story of our energy futures — and it is scary.

King coal is extending his kingdom. So dysfunctional is the world’s response to climate change that every year, the dirtiest fuel of them all is generating a growing proportion of the world’s energy. 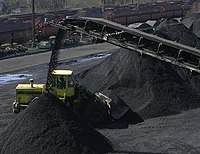 All the talks in Durban will be of how to kick the coal habit. But as the climate talks have dragged on — from Nairobi in 2006 to Bali to Poznan to Copenhagen to Cancun and now to Durban — we have been hardening our addiction.

When the talks began half a decade ago, 25 percent of the world’s primary energy came from coal. The figure is now 29.6 percent. Between 2009 and 2010, global coal consumption grew by almost 8 percent.

South Africa may enjoy green plaudits for hosting the Durban conference. And, to be fair, it has offered to reduce the carbon intensity of its economy. But the fact is that today the would-be midwife of a global climate deal has rich-world emissions in a predominantly poor-world country. Per head of population, its CO2 emissions are higher than those in the UK, while its GDP per capita is only a sixth as much. It is responsible for about 40 percent of Africa’s CO2 emissions from fossil fuel burning.

The reason is coal. Making energy by burning coal produces twice as much CO2 as by burning natural gas. And South Africa is one of the most coal-dependent nations on Earth, generating 93 percent of its electricity from the black stuff, compared to China’s 80 percent, India’s 70 percent and the U.S.’s 45 percent.

Thanks to coal, the world’s economy is becoming more carbon intensive.

Besides its domestic reliance on coal, South Africa also helps maintain the rest of the world’s ruinous carbon fix. It is the world’s third-largest exporter of power-station coal. Its giant mines in Mpumalanga province feed a constant convoy of coal trains headed for Richards Bay. Recently expanded, the export terminal there can now handle 91 million tons of coal a year — enough to produce more than 200 million tons of CO2. Mining giants Anglo American and BHP Billiton ship that coal to Europe, and, increasingly, to the new industrial powerhouses of Asia.

The world is in the middle of a coal rush. That is why last year — despite much political posturing about curbing greenhouse gas emissions — the 5.8-percent rise in global energy-related CO2 emissions marginally exceeded the global rise in energy consumption. Thanks to coal, the world’s economy is becoming more carbon intensive.

Cynics who said tougher carbon controls in rich nations might increase global emissions by outsourcing energy-intensive industries to poorer nations with laxer standards are, for now at least, being proved right. While many Western economies stall, many developing economies are growing fast. And the continuing heavy dependence of many of them on coal is pushing up the global economy’s reliance on the dirtiest fuel.

China may be the world’s largest producer of wind turbines and solar panels, but its coal consumption has doubled in the past eight years. In 2010, an amazing 48 percent of all the coal burned in the world was burned in China. The country’s roads are clogged with coal trucks headed from mines to power stations. Earlier this month, there was a 40-mile traffic backup out of the major coal-mining region in Shaanxi province. Trucks were taking a week to get down the main highway, which carries 160 million tons of coal a year. Last year, 10,000 vehicles were stuck for days on another coal road, out of Inner Mongolia.

Meanwhile, India’s coal consumption has doubled in 12 years. It is expected to have three times as many coal-burning power stations by the end of the decade. India, like China, has huge coal reserves of its own. But its economy is growing so fast that its miners cannot dig the stuff out of the ground quickly enough, causing a surge in imports. South Africa’s Richards Bay is a major supplier, along with Australia and Indonesia, which is likely to become the world’s top coal exporter before the decade is out.

Industry lobbyists use the phrase “clean coal” to suggest we can have both our coal and our climate.

None of this excuses the West. The U.S. remains the world’s second-largest coal burner, after China. Japan is the world’s largest coal importer, and Germany is the biggest producer of brown coal. The sad truth is that Germany’s plan to shut down its nuclear power plants in the wake of the Fukushima accident in Japan is already resulting in resurgent investment in coal. Analysts Point Carbon predict that the switch will increase German CO2 emissions during the coming decade by around half a billion tons.

Why doesn’t the world care? One reason is expediency. The inconvenient truth is that coal remains the world’s cheapest fuel for electricity generation and industrial heat and power. Another is coal’s PR.

“Clean coal” is its cleverest piece of sophistry. Lobby organizations like the American Coalition for Clean Coal Electricity — sponsored in the past by BHP Billiton, Duke Energy and others — use the phrase to foster the idea we can have both our coal and our climate. Most insidiously, the industry has persuaded many policymakers that dirty coal today can pay for clean coal tomorrow.

Clean coal is a distant vision, which could someday be possible through a technology known as carbon capture and storage — in which CO2 is stripped from stack emissions, liquefied and buried underground. But large-scale deployment of what would be a massive new industry is at least a couple of decades — and tens of billions of R&D dollars — away. And industry will only do it if forced.

Moreover, since the economic downturn in the West, investment in the necessary R&D to develop the technology has dried up. In September, the International Energy Agency warned that government support for CCS around the world was waning. “With current policies, CCS will have a hard time being deployed,” the agency’s deputy executive director, Richard Jones, told a high-level meeting in Beijing. Steve Chu, Barack Obama’s green-minded energy secretary, warned at the same meeting that “we are losing time. It is very important that we get moving.”

In the U.S., the FutureGen clean-coal pilot project has been stalled since the Bush administration pulled the plug and ordered a re-evaluation in 2008. Under Obama, a test well is being drilled in western Illinois, but the first carbon won’t be buried until 2016 at the earliest.

In Britain, once in the vanguard of action on climate change, the government is scaling back its green energy investment. An early casualty was its flagship $1.6-billion CCS project in Scotland, which was canceled earlier this month. That represented four wasted years. Denmark also canceled a pilot carbon storage project this month.

Nobody expects a UN climate deal in Durban this year — nor next year, nor the year after. But meanwhile the coal keeps burning. Global production is set to rise by 35 percent in the coming decade, according to industry analysts. The cheapest, most abundant and dirtiest of all the fossil fuels is extending its grip on the world’s energy supply system. And nowhere more so than just up the coast from Durban.